Accessibility links
The Fairy Tale Struggles To Live Happily Ever After Fairy tales have been a part of Disney's movie repertoire since the 1937 release of its first feature-length film, Snow White. But now that the company has decided to stop making animated princess movies, does this spell The End for the movie genre? 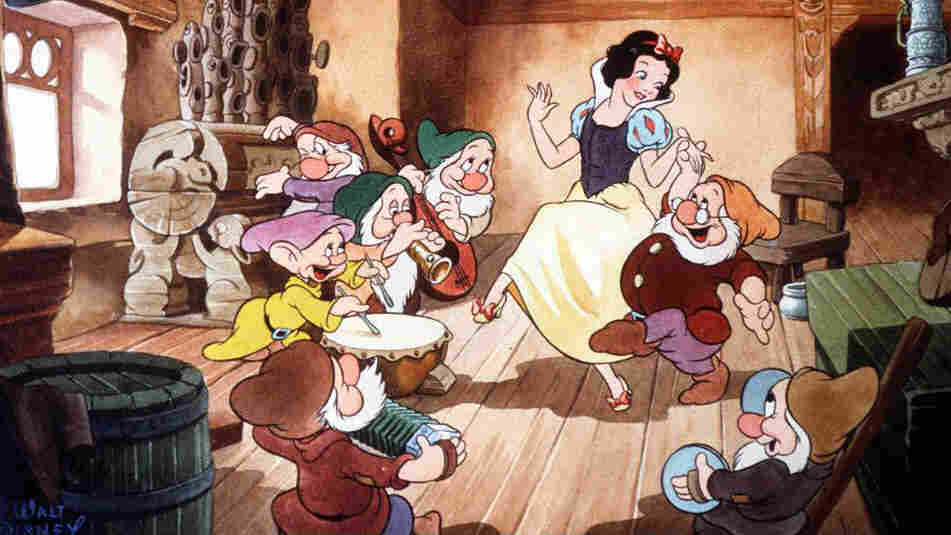 Fairy tales have been a part of Disney's movie repertoire since the 1937 release of its first feature-length film, Snow White. But now that the company has decided to stop making animated princess movies, does this spell The End for the genre? Sotheby's/AFP/Getty Images hide caption

The critical shunning could be construed as a key indicator: Fairy tale movies have fallen on hard times. In fact, around Thanksgiving, the Walt Disney Co. revealed it has no plans to make another animated fairy tale.

It's hard to imagine a world without Disney's fairy tales. What do we tell the children? Kissed frogs don't turn into princes, wicked stepsisters win out, glass slippers just won't fit. And what colorful icons will we silkscreen all over kids' pillows and lunchboxes?

"Films and genres do run a course," said Ed Catmull, president of Walt Disney Animation Studios and Disney subsidiary Pixar Animation Studios, in a late-November Los Angeles Times story. "They may come back later because someone has a fresh take on it ... but we don't have any other musicals or fairy tales lined up."

In fact, the Times reported, Disney has even backed away from a pair of fairy tale movies — The Snow Queen and Jack and the Beanstalk — that were in the works.

The implied message: The fairy tale has reached The End.

'There Is An Outcry'

Slaying the fairy tale, however, may be harder than Disney's imagineers can imagine, more difficult than stopping the brooms from toting water buckets in The Sorcerer's Apprentice.

For one thing, people might not let Disney off the hook so easily. For another, other storytellers and moviemakers besides Disney are intensely interested in keeping the stories alive.

On hearing the news from Catmull, Disney devotees reacted strongly. One woman wrote on Disney's Facebook page: "Disney, If you honestly think that fairy tales and princess stories need to go, you need to rethink that idea. You will LOSE. Take a minute and read the responses here, and on the plethora of articles stating that you are canning Snow Queen. There is an outcry, Listen to your fans."

Another simply said, "So sad…"

Amid the clamor, Catmull seemed to backpedal a little, posting a note on the Facebook page saying that the Times didn't get the story exactly right. Fairy tales, Catmull said, "are alive and well at Disney." He pointed to the recently released Tangled — which the Hollywood trade media report is doing much better at the box office than predicted — and added, "We have a number of projects in development with new twists that audiences will be able to enjoy for many years to come."

There was no mention of Brave, a planned Pixar computer-generated production of a mythic Scottish tale, featuring the voice of Reese Witherspoon and scheduled to be released in 2012.

Perhaps that's because, as some Disney observers believe, the company – founded on the success of animated fairy tales — is going through an identity crisis.

Film industry watchdog Nikki Finke of Deadline Hollywood says that animated fairy tales "are getting harder and harder to market. You can't make enough money just appealing to one quadrant, in this case very young girls. By focusing on more two- and three-quadrant movies, Disney reaches a bigger audience. It's that simple."

Animated fairy tales "have made too much money for Disney to just jettison them," Finke says. "On the other hand, as a feminist, I do believe all those princess movies have warped generations of young women's views of the world and their place in it. So for that I say hooray."

The first animated feature film created by the Walt Disney Co. — originally known as the Disney Brothers Cartoon Studio — was a fairy tale. Snow White and the Seven Dwarfs took founders Walt and Roy Disney and their stable of cartoonists three years to create. It was released during the holiday season in 1937.

In the ensuing 70 years, the company has given birth to a bevy of movies, including more than three dozen feature-length animated films, many based on fairy tales. And Disney has become a worldwide entertainment behemoth: Its movies and theme parks and merchandise have global appeal. 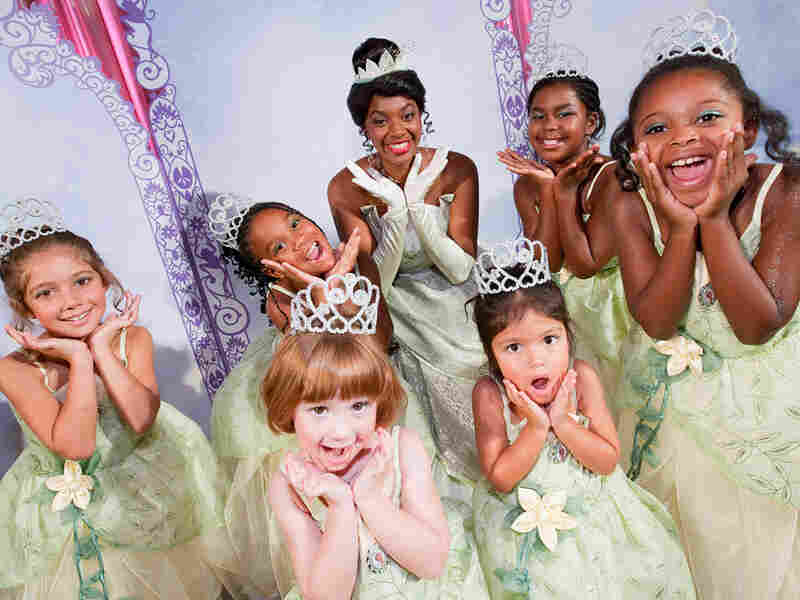 An actress dressed as Princess Tiana of The Princess and the Frog, surrounded by young fans. Between 2000 and 2009, worldwide sales of "Disney Princesses" stuff, a special category of merchandising and marketing, went from $300 million to $4 billion, according to company executives. Handout/Getty Images hide caption

In 2000, Disney created a special category of merchandising and marketing called the "Disney Princesses." The shelves were stocked with all material related to the animated female protagonists, including Snow White, Cinderella, Aurora ("Sleeping Beauty"), Ariel ("The Little Mermaid"), Belle ("Beauty and the Beast") and the rest. Disney executives told The Associated Press that between 2000 and 2009, worldwide sales of "Disney Princesses" stuff went from $300 million to $4 billion.

In 2001, DreamWorks — created by former Disney bigwig Jeffrey Katzenberg, among others — fired a major shot across Disney's bow. Shrek, a spoofish sendup of the traditional Disneyesque fairy tale, was a blockbuster and launched a series of successful sequels. Disney eventually countered with the 2007 animated/live action film Enchanted that poked fun at Disney's own fairy tale past and future.

In 2009, Disney released The Princess and the Frog. It was not as successful at the box office as Enchanted and, as Box Office Mojo reported, "the animated musical's tally was not enough to recall Walt Disney Pictures' hand-drawn heyday of the 1990s."

Then, in November 2010, Tangled hit the big screens. The movie reportedly cost more than $260 million to produce, making it the most expensive animated feature in history. The original title of the movie, Rapunzel Unbraided, was changed during production. Floyd Norman, a retired Disney animator, was quoted in the Los Angeles Times as saying, "The idea of changing the title of a classic like Rapunzel to Tangled is beyond stupid. I'm convinced they'll gain nothing from this except the public seeing Disney as desperately trying to find an audience."

Morphing To Fit The Zeitgeist

Is Disney worried that its magical princess movies are turning back into pumpkins? The company would not elaborate on what Catmull said.

The true lovers of fairy tales — the books as well as the movies — say that the stories are accessible and archetypal. And therefore they will always be with us, even if they morph to fit the zeitgeist.

Ann Seaton of Hicklebee's children's bookstore in San Jose, Calif., says that she grew up loving fairy tales. "They are a cornerstone of our culture and have endured because they have the ability to empower us beyond our wildest imagination. They are stories about perseverance, endurance and success against all odds."

The newer stories that live long after the telling, Seaton says, "follow these same conventions for a reason. These stories speak to us. Where would the Harry Potter stories be without the deep-rooted mythology that enfolds them? Or think of the success of Star Wars. Kids today are every bit as entertained and enthralled as when the movies came out in the '70s."

Though Disney may make fewer animated fairy tales in the future, other series such as Harry Potter and Twilight are introducing new generations to the wonder and whimsy required for an appreciation of fairy tales, she says.

"I think these works can help keep the classic fairy tale alive by bringing the conversation back to them again and again as foundational sources full of artful surprises," Bernheimer says. "Fairy tales have always been reinvented in every age — they are the never-ending story itself and will, I think, survive ever after."