Accessibility links
Movie reviews - 'The Way Back' - An Epic Journey, But Short On Drama Peter Weir's latest follows a group of Siberian prisoners whose escape plans encompass thousands of miles of stunning landscape — but not nearly enough in the way of personality. 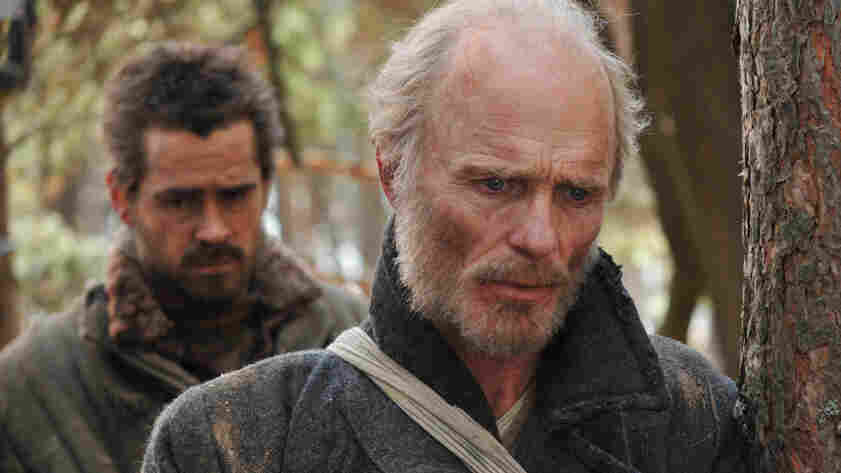 The Long Route Home: Colin Farrell (left) and Ed Harris star in director Peter Weir's survival epic, about a group of prisoners banished to a Siberian gulag — and their astonishing march across thousands of miles to India. Newmarket Films hide caption

'Valka And The Wolf'

'Valka And The Wolf'

In a bleak prison yard in 1940, a Polish political prisoner named Janusz and a dozen other recently convicted "enemies of the Soviet people" stand freezing as a commandant tells them about the gulag to which Stalin has sent them, and in which they're likely to die.

"Understand," he says, "it's not our guns or wire or dogs that form your prison. Siberia is your prison — all 5 million square miles of it." With a bounty on their heads, and a thousand-mile walk to the nearest border, they can count on nature to be a "merciless jailer."

Still, dying in Siberian salt mines hardly qualifies as an attractive alternative, so Janusz (Jim Sturgess) and a clutch of mismatched comrades that includes a tight-lipped American expat (Ed Harris) and a thug with Stalin tattooed on his chest (Colin Farrell) begin planning a breakout. Drawing maps in the snow — it's barely more than guesswork as to where they are or where they need to get — they acknowledge that most of them will die in the attempt. But at least, says Janusz, they'll die free men.

Call that consolation of a sort as they trek, increasingly famished and exhausted, across frozen tundra, past the Great Wall of China and through the Gobi Desert to the foothills of the Himalayas, only to realize they still have another thousand miles to go.

The Way Back is based on The Long Walk, a bestselling 1950s memoir by Polish veteran Slavomir Rawicz that was thought to be the author's own story until, shortly after the fall of Polish communism, records surfaced establishing that Rawicz was actually freed in a 1942 amnesty. Another Polish veteran subsequently claimed that the story was based on his own walk to freedom, but by that time the book's narrative had been so widely called into question that holding filmmakers accountable for making up events and characters — Farrell's oddly inked bruiser is apparently an invention — seems pointless.

The film finesses the question by referring onscreen to The Long Walk as a book rather than a memoir, while the media notes refer to it as a novel. Whatever. True or not — and archived news reports from 1942 indicate that a handful of gulag refugees did surface in India after crossing the Himalayas on foot — the tale provides the framework for a persuasively grueling adventure.

Director Peter Weir has directed a lot of survival stories since he first received international attention for Picnic at Hanging Rock some 35 years ago. A substantial number of his films — Witness, Gallipoli, The Year of Living Dangerously, Fearless and The Mosquito Coast among them — can be characterized as stories of survivors in trying circumstances. And it's easy to see Weir as a Hollywood survivor himself, struggling to get pictures made despite an enviable track record. He has been telling interviewers that his three most recent projects foundered before this one clicked.

It's been seven years since his seafaring star vehicle Master and Commander: The Far Side of the World, and as a way back, The Way Back certainly qualifies as different: independently financed rather than studio-made, with characters navigating not oceans and naval battles, but mountains, sandstorms and, on one bug-infested shoreline, even a mosquito coast of sorts.

Weir, who not only directed but also co-wrote the story, keeps things brisk and elemental. But while the performers are game, the images (shot mostly in Bulgaria and Pakistan) decently breathtaking, and the story legitimately harrowing, the film that contains them feels oddly undramatic — proof of the maxim that epic elements don't mean much without engaging characters to hang them on. Admirable though they may be for their pluck and endurance, Janusz and his comrades never come into sharp-enough focus to make you care about them. And without emotional involvement, The Way Back is just a long walk.