Storms And Salvation: 'The Flying Dutchman' 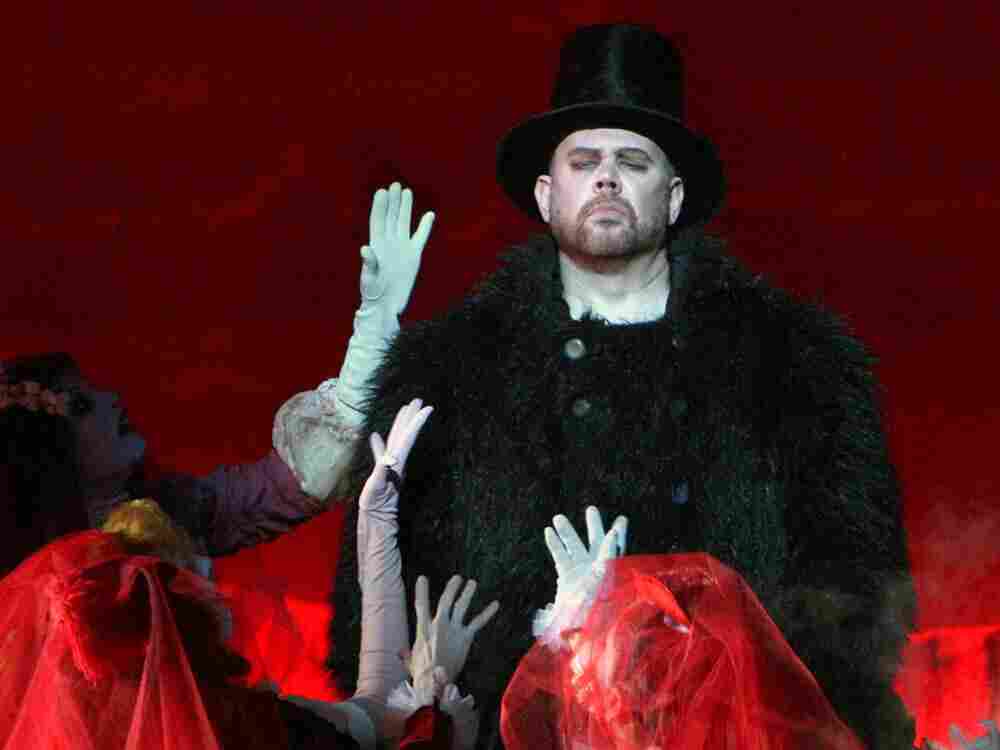 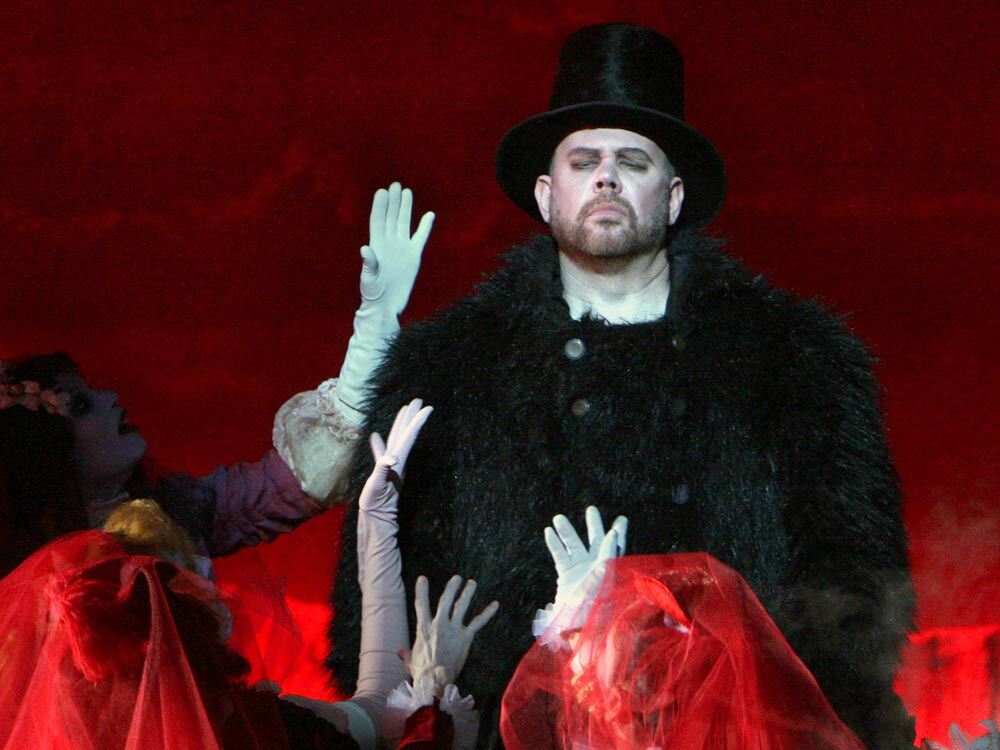 Alan Held makes an impression as the mysterious title character in Wagner's The Flying Dutchman, at the Washington National Opera.

Placido Domingo, the Washington National Opera's general director, hears a bit of passionate, Italian verismo in Wagner's opera, right from the start of its famous overture.

Love him or hate him, Richard Wagner has a reputation as the composer of immense, four-hour-plus dramas, rooted in confusing stories, drawn from obscure mythology.

The most familiar excerpt from The Flying Dutchman is probably its tempestuous Overture, a sort of tone poem that tells the opera's complete story, in music alone, before the action even begins.

For legions of Wagner enthusiasts, that makes no difference. Countless music lovers have found themselves drawn — raptly — into the vast musical worlds Wagner created, and eager to return time after time. But there are others who find his sprawling, dramatic canvasses — the ones he called "music dramas" rather than operas — to be abstruse, forbidding, or simply too long to bear.

Yet Wagner wasn't always the composer his reputation now suggests. His earliest works are more traditionally operatic, and their musical style doesn't quite seem fully his own. But by his fifth opera, The Flying Dutchman, Wagner had hit his stride. Its powerful music clearly anticipates the groundbreaking dramas yet to come, yet it serves a simple and compelling tale that's brimming with action, and passion, from top to bottom. And its two-hour story seems to fly by, even in the original, one-act version.

Wherever you look, in the history and literature of just about any culture, you can find a shadowy character generically described as "the wanderer." On film, we find examples among Hollywood Westerns. Think of all those Clint Eastwood movies where he plays an unknown horseman who rides into town, metes out justice, wins a heart or two, and then leaves as mysteriously as he came.

The title character in Wagner's The Flying Dutchman is simply a more venerable version of that same, legendary wanderer.

The Dutchman's story dates back centuries. He's the ship's captain who tempts fate, and is cursed, doomed to wander stormy seas forever. By now, this character's tragic legend, and his evocative name, are pervasive enough to have made it into some unexpected places. Not long ago, the Dutchman found himself mixed up with the unlikeliest of modern heroes — in a video game called "Spongebob Squarepants: The Revenge of the Flying Dutchman!"

Still, of all the Dutchman's varying incarnations, it's hard to think of one that's more vivid, dramatic and compelling than the one in Wagner's opera.

On World of Opera, host Lisa Simeone presents a production of The Flying Dutchman from the Washington National Opera, featuring standout performances by baritone Alan Held in the title role and soprano Jennifer Wilson as Senta, the woman who finally breaks the Dutchman's curse.

The Story Of 'The Flying Dutchman' 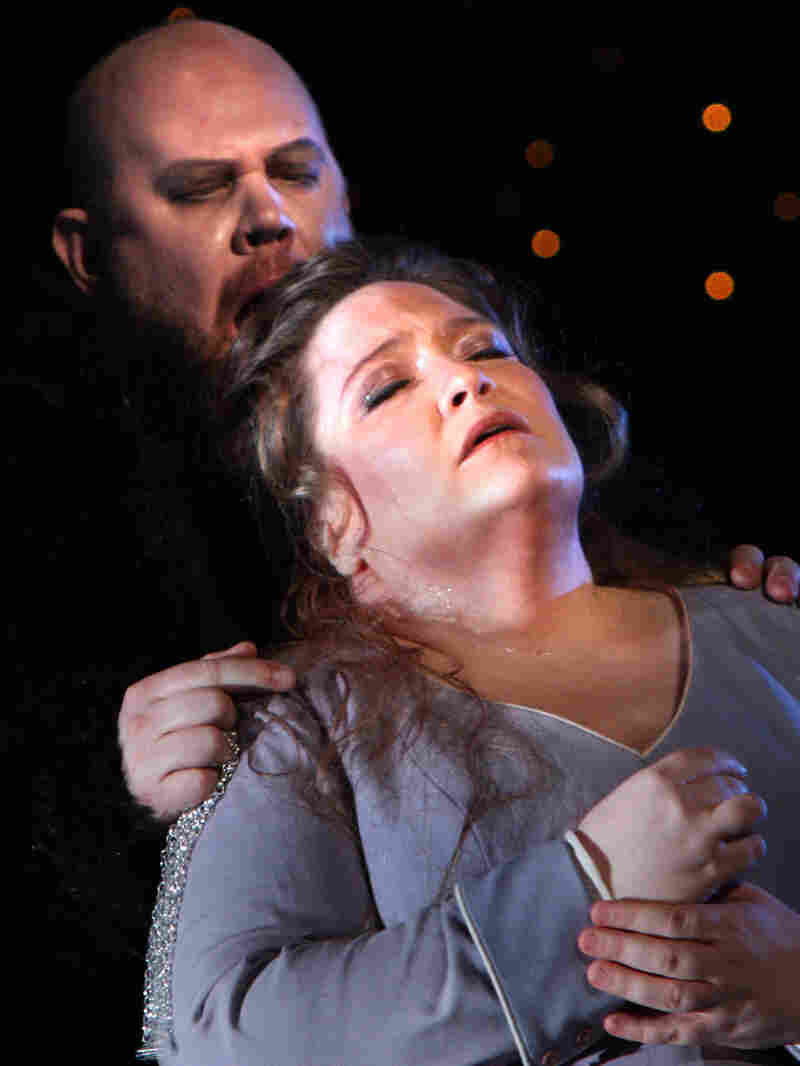 The Dutchman (Alan Held) makes his appeal to Senta (Jennifer Wilson), whose love might release him from his ancient curse. Karin Cooper/Washington National Opera hide caption 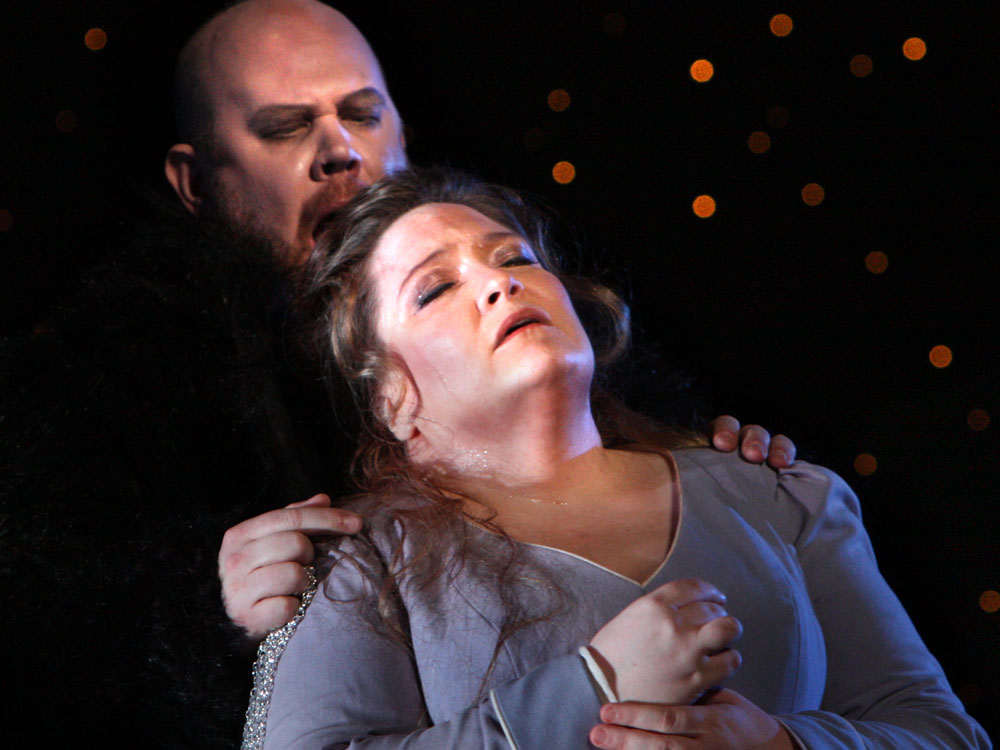 The Dutchman (Alan Held) makes his appeal to Senta (Jennifer Wilson), whose love might release him from his ancient curse.

The Flying Dutchman was a sea captain who once found himself struggling to round the Cape of Good Hope during a ferocious storm. He swore that he would succeed even if he had to sail until Judgment Day. The Devil heard his oath, and took him up on it. The Dutchman was condemned to stay at sea forever. His only hope for salvation was to find a woman who loved him enough to declare herself faithful to the Dutchman for life — no matter what. To top it off, he could only stop sailing once every seven years, to go ashore and search for that one true love.

Following that stormy overture, we see a ship struggling to reach port in a sheltered cove. The captain is a Norwegian named Daland, who lives nearby with his daughter, Senta.

Another ship appears — a gloomy-looking vessel with black masts and blood red sails. Its captain is the legendary Dutchman. His latest seven-year stint is up, and the ship enters the harbor so the Dutchman can go ashore and search for love. The two captains meet, and Daland tells the Dutchman about his daughter Senta. Thinking she might be the woman he's looking for, the Dutchman offers Daland his entire fortune in return for an introduction. Daland agrees, and the two ships sail for Daland's home.

Next, we meet Senta herself. She's in Daland's house, spinning with her friends, and she sings them the ballad of the Flying Dutchman. Finishing the story, she stares at a painting of the Dutchman, and says she will be the one to save him. Senta does have a suitor, a hunter named Erik. But she's obsessed with the legendary Dutchman, leaving Erik jealous of a supposed myth.

When Daland's ship lands, the other women leave to greet the sailors, and Daland arrives at home with a man Senta has never seen before. He's the Dutchman, and she immediately notices his resemblance to the picture on the wall. Daland leaves the two alone. 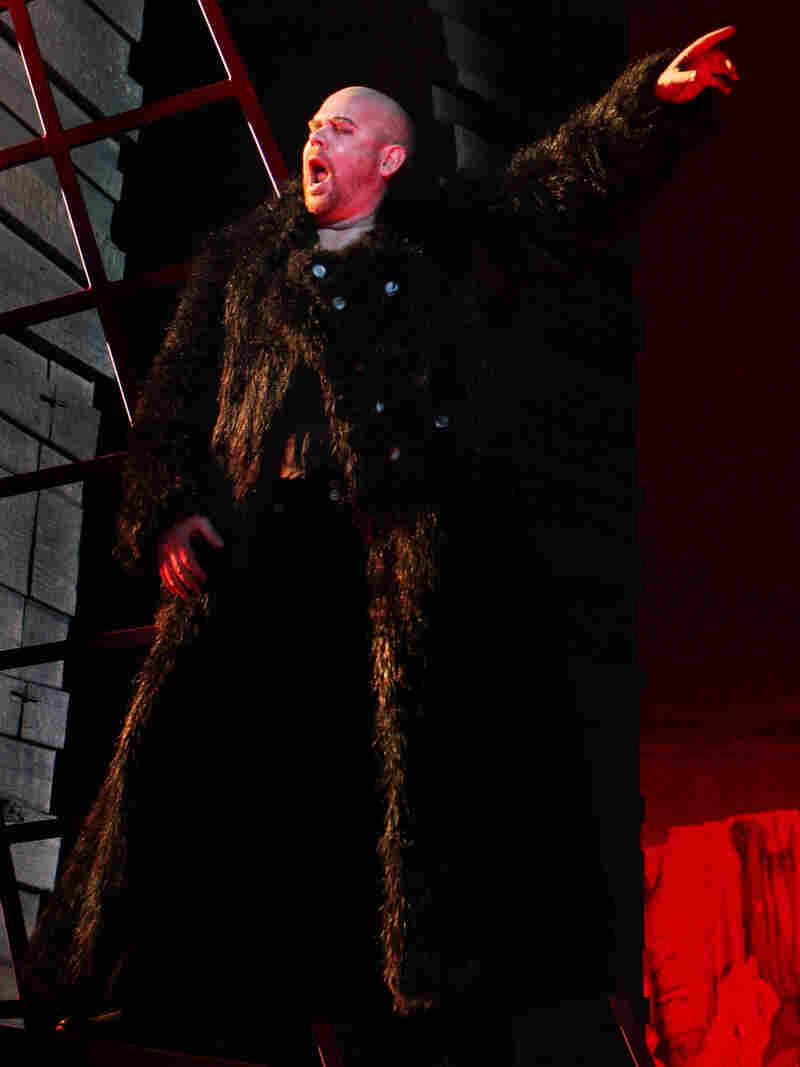 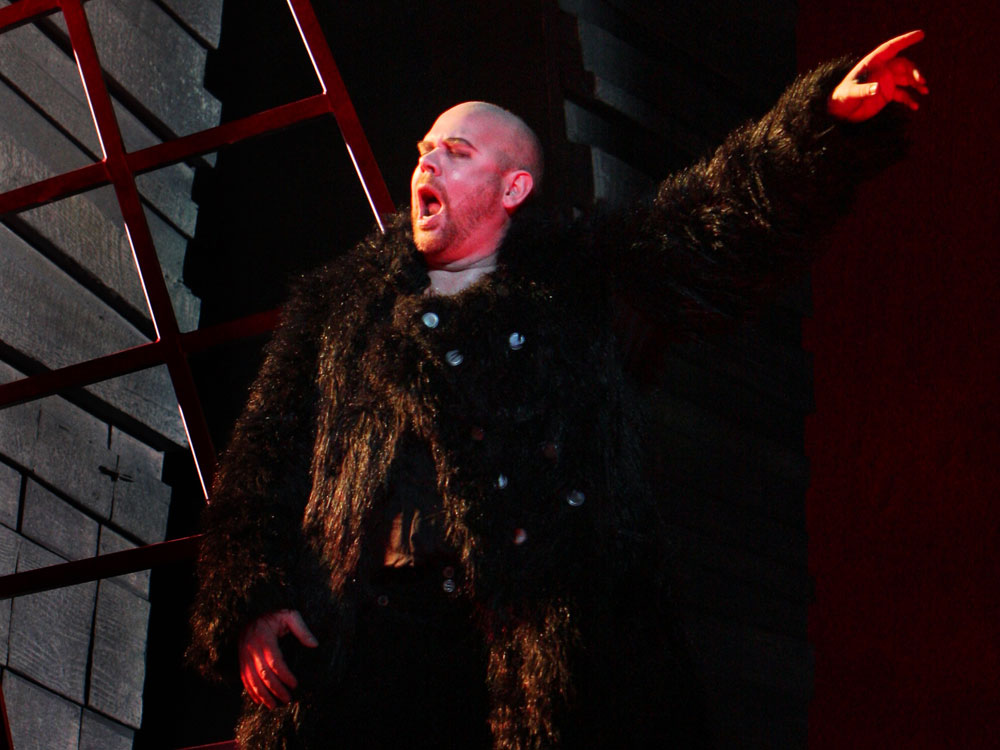 The Flying Dutchman (Alan Held) hopes to escape the dark ship on which he's cursed to sail forever.

When the Dutchman professes his love, Senta agrees to marry him. She swears she'll be faithful to him forever, and the Dutchman dares to think that he has finally beaten the curse.

In port, we again see two ships — the worn and gloomy ship of the Dutchman, and Daland's bright, white-sailed vessel. From the shore, local women and the men from Daland's crew call to the dark ship and, gradually, its crew appears. They're a grim collection of men who share their captain's fate — to sail the seas for eternity.

On shore, Erik comes to Senta. He reminds her of old times, and begs her to reconsider her love for the Dutchman. When she refuses, he accuses her of infidelity. The Dutchman has been listening in secret. Assuming that he has lost Senta's love, he returns to his ship and prepares to set sail. Senta is determined to save him and follows, while others try to restrain her.

As his ship is leaving, Senta frees herself, and climbs to the top of a bluff. Again, she declares that she'll be faithful to the Dutchman until death, and proves it by leaping into the sea. The curse is broken. The Dutchman's ship crumbles and sinks. A vision of Senta and the Dutchman is seen over the water, and the music reveals the story's ending: Senta's sacrifice has brought the Dutchman his peace.