Accessibility links
After Health Care Vote, GOP Targets Abortion Republican leaders introduced legislation that would permanently bar any taxpayer subsidies for abortion. But supporters of abortion rights say the new GOP majority is overplaying its hand by making the bill a top priority. 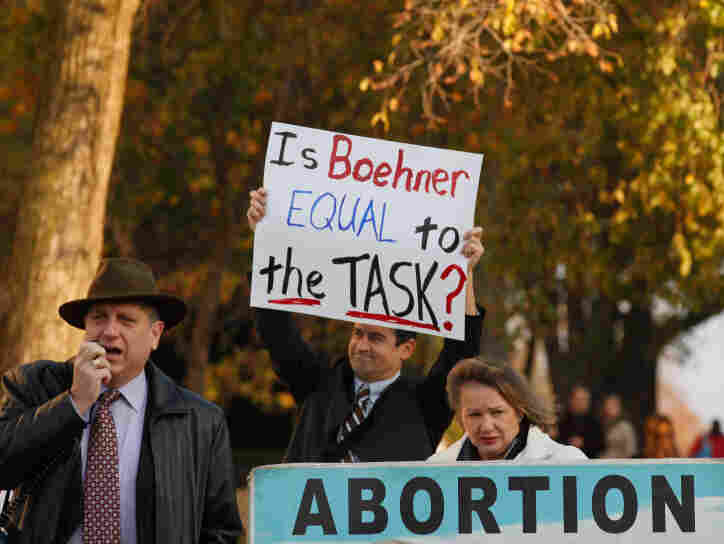 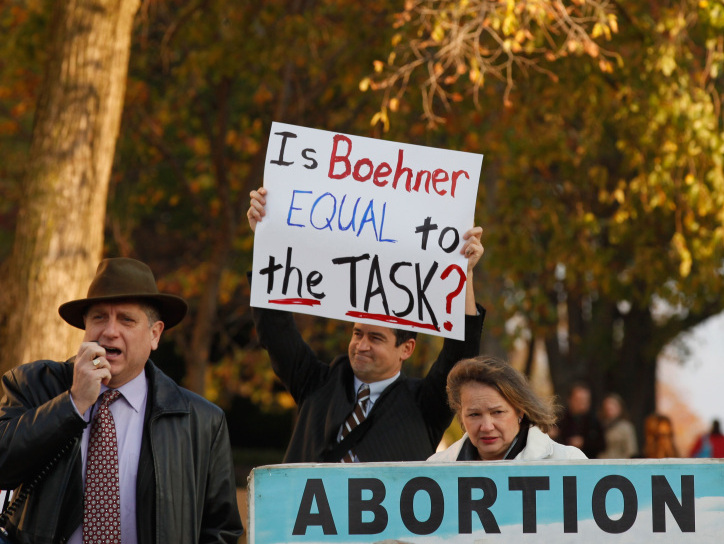 Abortion, the issue so contentious that it almost prevented the health law from passing last year, is back. But this time, Republican leaders are raising it on purpose. And if another divisive debate helps further weaken the health law they would like to see repealed, that would be an added bonus.

Just one day after Republican leaders pushed through the House a measure to repeal the entire health law, a measure unlikely to even be considered by the Senate, they were back before the cameras, introducing legislation that would permanently bar any taxpayer subsidies for abortion.

The legislation, called the "No Taxpayer Funding for Abortion Act," is sponsored by Rep. Chris Smith (R-NJ), the longtime chairman of the House Pro-Life Caucus.

Smith says the bill would write into permanent law existing abortion restrictions that Congress has to currently renew every year.

"Our new bill is designed to permanently end any U.S. government financial support for abortion, whether it be direct funding or by tax credits or any other subsidy," he said.

This isn't the first time Smith has tried to make permanent various annual abortion restrictions. But this year is different. His bill has been officially designated HR 3, signaling that it's a top priority for the GOP leadership.

"The 2010 elections were about jobs and the economy," said Nancy Keenan, president of NARAL Pro-Choice America. "It was not an endorsement of an anti-choice agenda."

Both the federal court in Virginia and the Ohio Elections Commission determined that the claim that the [health law] funds abortion is false. So the question is not whether we're going to strip abortion funding from health care reform. The question is how much further Congress is willing to go to remove tax subsidies for abortion coverage that is currently available.

But Smith's bill isn't even the only major piece of abortion legislation that is likely to get an early vote in the House. Rep Joe Pitts (R-PA), another longtime abortion opponent, now leads the health subcommittee of the House Energy and Commerce Committee. He has a bill, the "Protect Life Act," that he says would close loopholes in the health law that allow abortion funding.

"They've opened the proverbial floodgates for federal money to pour into abortion services, and with it they've incentivized an extremely controversial practice," Pitts said at a separate news conference Thursday. "This is simply not acceptable."

But whether the health law actually does allow federal abortion funding is still the subject of a heated debate. While abortion opponents say it does, abortion-rights groups say it does not. Not only that — supporters of abortion rights say the law actually puts new restrictions on the procedure. That's because it requires women to buy separate insurance policies if they want abortion coverage provided by their insurance plan.

"Eighty-seven percent of plans sold in this country today do include abortion coverage as a standard benefit," said Donna Crane, NARAL's policy director. "It's basically sort of the industry standard."

Other surveys have found abortion coverage less pervasive than that, but still widespread.

And it's not just abortion-rights groups that say the law didn't expand abortion access. Timothy Jost, a law professor at Washington and Lee University and a prominent anti-abortion voice, says what many Republicans are saying about the law and abortion is simply not so.

"Both the federal court in Virginia and the Ohio Elections Commission determined that the claim that the [health law] funds abortion is false," Jost said. "So the question is not whether we're going to strip abortion funding from health care reform. The question is how much further Congress is willing to go to remove tax subsidies for abortion coverage that is currently available."

Jost is referring to the fact that Smith's bill would do more than just write into law existing abortion restrictions. It would also eliminate tax benefits for insurance policies that cover abortion — even abortions in most cases of medical necessity.

NARAL's Crane says the effect could be far-reaching.

Unlike the bill to repeal the entire health law, which is given basically no chance of passing the Senate, anti-abortion legislation is seen as having a good chance. That's because many Democrats in that chamber oppose abortion rights, too.