Accessibility links
'No Strings Attached': Corny, Contrived, Conservative In No Strings Attached, Natalie Portman plays a medical resident who wants to sleep with her friend, played by Ashton Kutcher, with none of the messy emotions that come with a relationship. Critic David Edelstein says the film is calculated — and not particularly good. 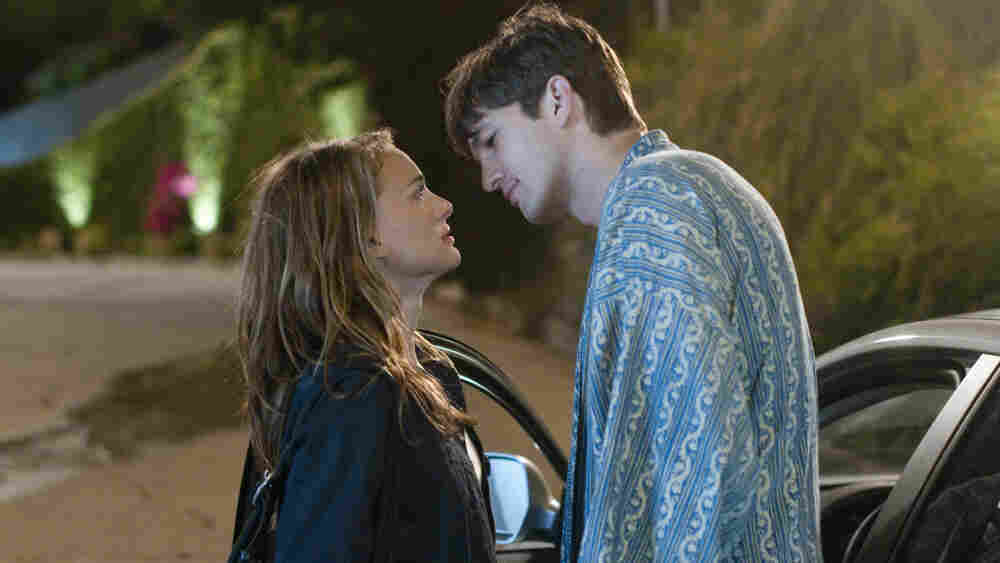 Emma (Natalie Portman) just wants to sleep with Adam (Ashton Kutcher) — she doesn't expect him to fall in love with her. Dale Robinette/Paramount Pictures hide caption 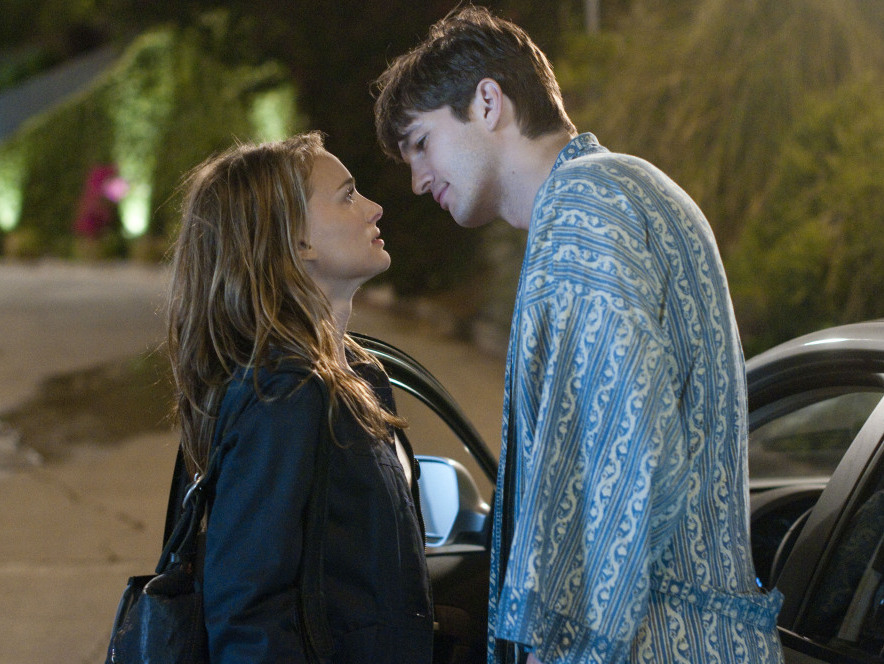 Emma (Natalie Portman) just wants to sleep with Adam (Ashton Kutcher) — she doesn't expect him to fall in love with her.

Rated R for sexual content, language and some drug material.

'Did I Have Sex With Anyone?'

'Did I Have Sex With Anyone?'

I've heard the perpetrators of No Strings Attached pat themselves on the back for making a comedy that's "edgy," yet I've seen movies from the early 1930s — before the rise of restrictive Hollywood codes — that had less old-fashioned ideas about casual sex.

The gimmick here is that Natalie Portman's brainy medical resident Emma is "allergic to serious relationships" and wants a special guy friend for regular trysts — just the job, she thinks, for her old summer-camp acquaintance Adam, a down-to-earth TV production assistant played by the tall and rangy Ashton Kutcher. The scheme is hatched in her bedroom after a spontaneous and highly satisfying quickie.

Adam says it would be fun, but it's instantly clear that he wants flowers and romance and a relationship, which drives Emma crazy for no logical reason apart from the script's high concept. Adam is handsome, funny, kind, talented and even rich — his dad, played by Kevin Kline, is a famous actor. When they meet five years before the main action, he wears a backward cap and talks like a stoner dude, but by the time he and Emma get together there's no indication they're intellectually mismatched.

Although the snappy script is by a woman, Elizabeth Meriwether, and has a supposedly feminist veneer — it's the brusque female professional and the clingy male bimbo — No Strings Attached never makes the case for Emma's point of view. It's almost a feminist-backlash movie.

And it didn't have to be. There are plenty of reasons for brilliant young women — especially with the stress of a medical career — to approach time- and emotion-consuming relationships warily. But Emma just seems psychologically off. Natalie Portman plays her high-strung and brittle, careering from chill cerebral detachment to messy babbling emotional spew. She's OK, but she never fills the character in. The "why, why, why" of Emma's peculiar "allergy" goes unanswered, so you never like her.

Portman gets no help from Ivan Reitman, the heavy-handed director. Reitman was lucky enough in the '70s to fall in with a bunch of geniuses affiliated with the National Lampoon, with whom he made Meatballs and Ghostbusters. Lately, he has paved the way for his son, Jason, who won a slew of Oscar nominations for supposedly edgy comedies like Juno and Up in the Air. No Strings Attached is like the father trying to get in on the son's action — which is what Adam's father actually does in the movie.

The elder Reitman, though, has none of his son's feel for the Zeitgeist, and the commercial scaffolding shows. There's the wisecracking gay guy, the wisecracking black guy and the bubbly blond friend of the heroine played by indie pin-up-girl Greta Gerwig — who as Emma's roommate has little to do except smirk sympathetically. The movie is so calculated I felt that if the camera pulled back a foot from the bed while the actors pretended to make love, their agents would be standing there glowing like proud parents.

We should be grateful there is sex, though, which is more than you can say for something like the 2003 Hollywood romantic comedy How to Lose A Guy in 10 Days, which was founded on the premise that even the most beautiful woman could drive a man off by sleeping with him instantly and then getting clingy — except the studio allegedly balked at the sex part for fear the audience would think she's a slut, so the whole premise made no sense. No Strings Attached is corny and contrived and conservative, in that in the end it argues that the no-strings-attached plan can't work. But at least Emma isn't made out to be a slut for wanting the same kind of pleasure that guys do. She's just portrayed as kind of crazy.