Accessibility links
S. Korean Commandos Battle Pirates In Rare Raid In a top-secret operation reportedly lasting five hours, South Korean special forces scrambled up a ladder onto a hijacked vessel in the Arabian Sea at dawn and saved all 21 crew members aboard the Samho Jewelry. Eight Somali pirates were killed and five were captured alive. 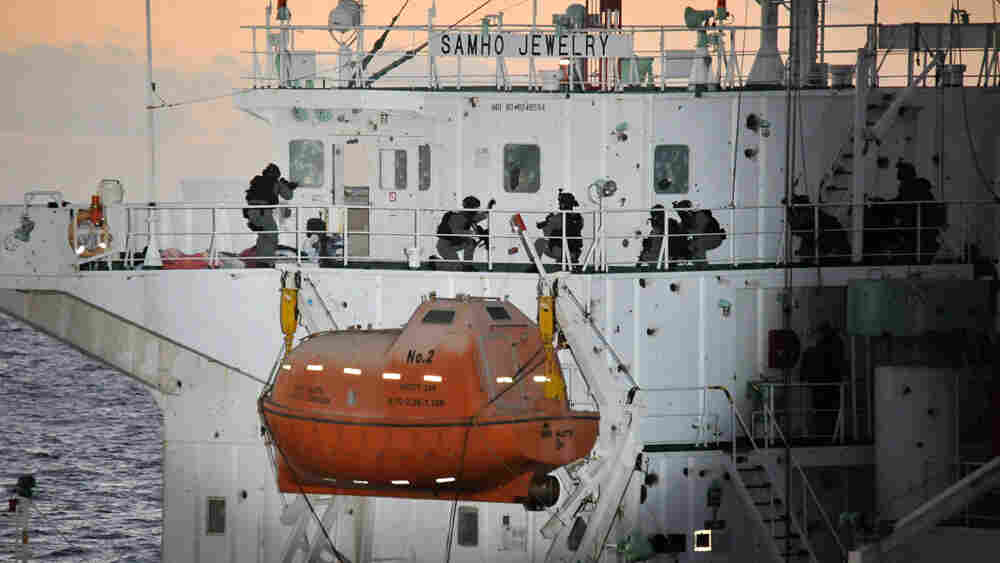 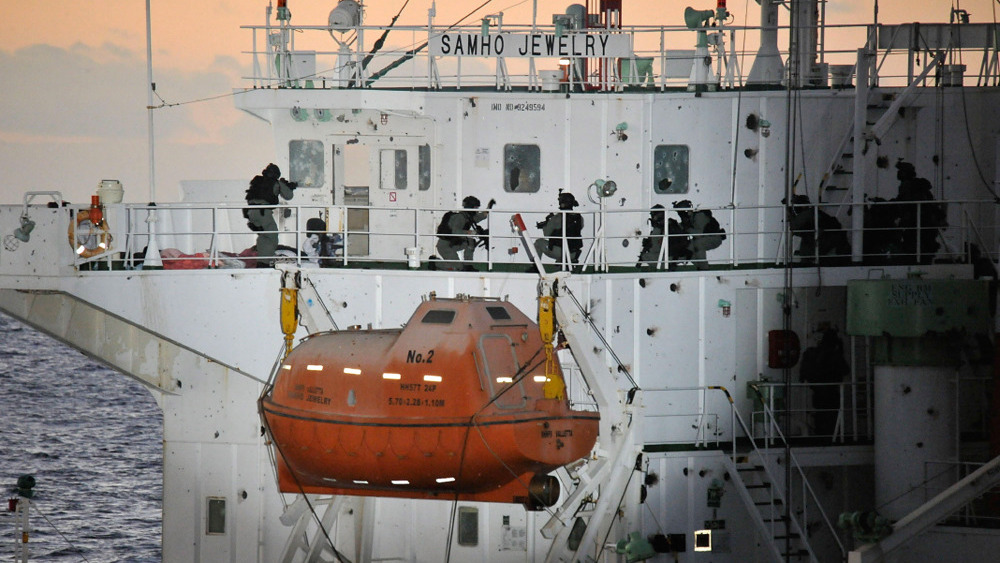 Members of South Korean naval forces board the hijacked cargo ship Samho Jewelry to rescue crew members on Friday in the Arabian Sea.

The top-secret operation reportedly lasted about five hours, and photographs from the raid show commandos crouching on the deck of the Samho Jewelry, which was captured by pirates on Jan. 15. Commandos scrambled up a ladder onto the ship, aboard which the pirates were armed with AK assault rifles and antitank missiles. A South Korean destroyer and hovering Lynx helicopter provided covering fire.

Pockmarks from artillery fire blanketed the ship's bridge. One of the hostages was wounded — the captain suffered a gunshot wound — but all were alive in a remarkable ending for a risky rescue.

We will not tolerate any behavior that threatens the lives and safety of our people in the future.

Five Somali pirates were captured alive during the raid.

A wife of one of the South Korean crew cried in gratitude as the weeklong hijacking came to an end. "Family members couldn't sleep or eat well and prayed for a safe return. I am very relieved," she said, according to Yonhap news agency.

South Korean President Lee Myung-bak called the operation "perfect," and analysts said he likely will win political points for taking such an aggressive stance. Lee and his administration took heat in November after North Korea shelled a South-held border island, killing four people. Critics said the military's response was too slow and soft.

"We will not tolerate any behavior that threatens the lives and safety of our people in the future," Lee said in a brief televised statement.

Friday's operation was unprecedented for South Korea, which has been growing increasingly concerned about the threat from pirates who have long tormented shipping in the waters between Africa and the Arabian peninsula.

It also marked the first rescue operation by a South Korean navy vessel that has been deployed in the Gulf of Aden to help fight piracy since 2009. South Korea's Joint Chiefs of Staff said the destroyer was accompanying the vessel to a safe area; it didn't elaborate.

Other countries' special forces have launched several raids to rescue pirated ships in the past few months, but as soon as they were assured — and never before they confirmed — that the crew was locked in a safe room, commonly referred to as a "citadel."

The raid on the Samho Jewelry in waters between Oman and Africa was rare because it happened a week after the Somali attackers seized the 11,500-ton chemical carrier as it was sailing from the United Arab Emirates to Sri Lanka.

Militaries are usually reluctant to launch such raids because of the risk of harm to hostages. A French rescue in 2009 that came two days after a sailboat was taken left one hostage dead.

Countries have different criteria for deciding whether to launch raids, said Graeme Gibbon-Brooks, the head of Dryad Maritime Intelligence, which provides information about piracy to shipping companies. Some countries are aggressive, but others consider that the risk of hostages being caught in a crossfire is greater than the risk of waiting out the hijackers.

But Gibbon-Brooks said it's unlikely the pirates would try to retaliate by harming other crews.

That "would be spectacularly unwise. Somalis are known for being good business people, and I think that that would lead to very a quick collapse of their business model," he said.

Somalia has not had a functioning government since 1991, during which time piracy has flourished off its coast, sometimes yielding multimillion-dollar ransoms. The ransoms the pirates get are among the few sources of income for small businesses that supply the pirates with food and other goods.

The Bahrain-based U.S. 5th Fleet referred all questions to South Korea, although it said the U.S. Navy was aware of the rescue. Samho Shipping did not respond to a request for comment Friday.

The Samho Jewelry was the second vessel from South Korea-based Samho Shipping to be hijacked in the past several months.

In November, Somali pirates freed the supertanker Samho Dream and its 24 crew — five South Koreans and 19 Filipinos — after seven months of captivity.

In April 2009, a French navy commando team stormed the yacht Tanit. The shootout killed two pirates and one French hostage and freed four French citizens. The order for the rescue came after the pirates threatened to kill the hostages.

In the same year, U.S. navy snipers also shot three pirates who were holding an American captain hostage in a lifeboat after they had abandoned a larger ship, the Maersk Alabama.

With reporting for NPR from Michael Rhee in Seoul, and material from The Associated Press.