Accessibility links
'Why Leaders Lie,' Whether You Believe It Or Not When is it all right for leaders to lie to other leaders, other nations — or their own? Political scientist John Mearsheimer poses the provocative question in his new book. 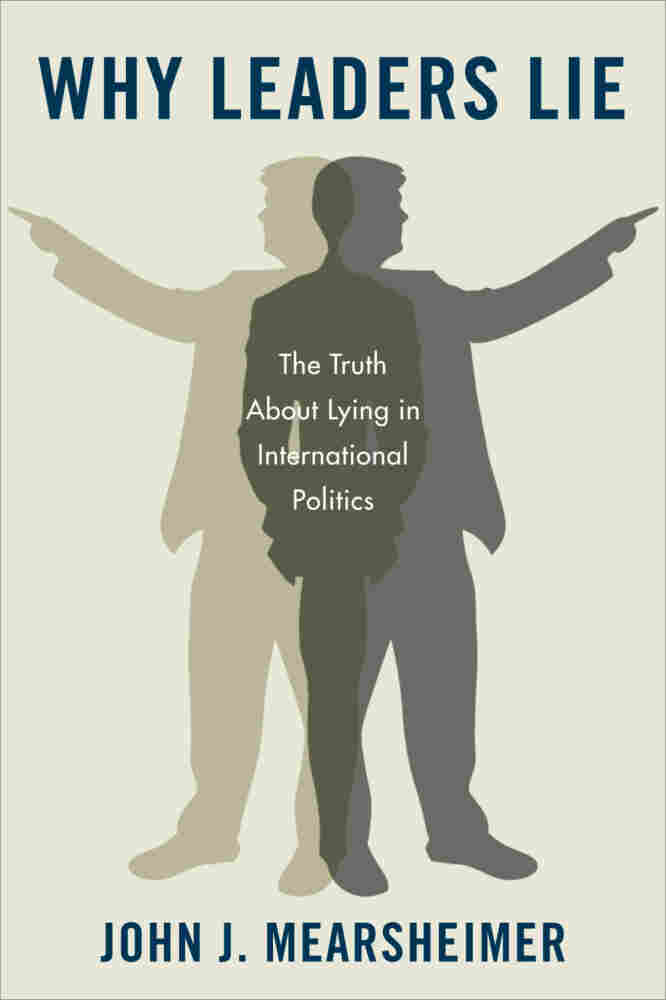 When is it all right for leaders to lie to other leaders, other nations or their own? Political scientist John Mearsheimer poses that provocative question in his new book, Why Leaders Lie: The Truth About Lying in International Politics.

"The fact is that strategic lying is a useful tool of statecraft," Mearsheimer tells Weekend Edition host Scott Simon.

Even so, Mearsheimer, who teaches political science at the University of Chicago, says there aren't actually many cases of what he calls "strategic deception" to be found.

Most people don't believe Mearsheimer, either. "They tell me I'm just not looking hard enough." It's an irony he bears with pragmatism.

"It pains me to make the argument that lying is sometimes a good thing," he says. "But international politics, as you know, this is a rough business — and sometimes it makes very good sense to lie."

Before defining lying, spinning, and concealment, it makes good sense to define deception, the general category that includes those three behaviors, as well as truth telling, which is the direct opposite of deception.

Truth telling is when an individual does his best to state the facts and tell a story in a straightforward and honest way. Every person invariably has limited knowledge about the details of any case and biases as well. Memories can also be faulty and it is impossible to relate every fact one knows when telling a story. The key point, however, is that a truth teller makes a serious effort to overcome any biases or selfish interests that he might have and report the relevant facts in as fair-minded a way as he can. Deception, in contrast, is where an individual purposely takes steps that are designed to prevent others from knowing the full truth — as that individual understands it — about a particular matter. The deliberate aim, in other words, is not to provide a straightforward or comprehensive description of events.

Lying is when a person makes a statement that he knows or suspects to be false in the hope that others will think it is true. A lie is a positive action designed to deceive the target audience. Lying can involve making up facts that one knows to be false or denying facts that one knows to be true. But lying is not only about the truthfulness of particular facts. It can also involve the disingenuous arrangement of facts to tell a fictitious story. Specifically, a person is lying when he uses facts — even true facts — to imply that something is true, when he knows that it is not true. In such cases, the liar is purposely leading the listener to a false conclusion without explicitly stating that conclusion.

There is always the possibility, of course, that a person who thinks that he is telling a lie has the facts wrong and is inadvertently telling the truth. The reverse might be true as well: a person who believes that he is telling the truth might have his facts wrong. This problem, however, is irrelevant for my purposes, because I am interested in determining whether a person is being truthful — stating facts or telling a story that he believes to be true — not whether he ultimately proves to be right or wrong about the facts. Simply put, my concern is with truthfulness, not the truth.

Spinning is different from lying, although there will be some cases where the distinction is murky. Spinning is when a person telling a story emphasizes certain facts and links them together in ways that play to his advantage, while, at the same time, downplaying or ignoring inconvenient facts. Spinning is all about interpreting the known facts in a way that allows the spinner to tell a favorable story. It is all about emphasizing and deemphasizing particular facts to portray one's position in a positive light. With spinning, no attempt is made to render a completely accurate account of events. The basic story being told is distorted, but the facts are not put together so as to tell a false story, which would be a lie. Spinning is exaggeration or distortion, not prevarication. Tiger Woods captured the essence of spinning when he told an interviewer from Sports Illustrated in 2000, "I've learned you can always tell the truth, but you don't have to tell the whole truth."

What usually happens in an American courtroom provides a good way of illustrating the difference between lying and spinning. When a witness is called to the stand he is sworn to tell "the truth, the whole truth and nothing but the truth" and then he is asked a series of questions, which he is expected to answer truthfully. The person in the docket could lie, but the key point is that he is required by law to tell what he believes to be the truth. The attorneys for the plaintiff and the defendant, on the other hand, are primarily interested in winning the case for their clients, not determining the full truth about what happened in the dispute at hand. Accordingly, each makes an opening and closing statement in which he spins the facts of the case in ways that puts his client in the most favorable light. The rival lawyers invariably tell two different stories, but neither is allowed to lie. The American Bar Association, for example, stipulates in its rules of conduct that "a lawyer shall not knowingly make a false statement of fact or law to a tribunal." Spinning, however, is not only permissible; it is what lawyers routinely do for their clients.

The third kind of deception is concealment, which involves withholding information that might undermine or weaken one's position. In cases of this sort, the individual simply remains silent about the evidence, because he wants to hide it from others. Of course, if he is asked a question about the matter and lies to conceal it, that behavior fits my definition of lying. A good example of concealment is the Bush administration's decision not to tell the public before the Iraq War began in March 2003 that two key Al Qaeda figures — Khalid Sheikh Mohammed and Abu Zabaydah — had separately told their American interrogators that Osama bin Laden had thought about asking Saddam Hussein to form an alliance against the United States, but then decided against it. If these facts had been made public, they would have undermined the Bush administration's claim that bin Laden and Saddam were collaborating with each other, which was important for winning public and congressional support for the war. This behavior was certainly deceptive, but it was not lying, at least according to my definition, because it did not involve taking a positive step to deceive someone. In short, when a person spins a story or conceals facts, he is not lying, but neither is he being completely truthful.

Lying, as emphasized, is usually considered deplorable behavior, whereas most people seem to believe that it is acceptable to spin and conceal, even though these behaviors are designed to deceive. One possible reason for this difference is that lying is more difficult to detect and protect against than either spinning or concealment. Liars make false assertions in ways that are designed not to raise any doubts about the truthfulness of their claims. Skillful liars present false assertions with an air of certainty that makes it especially difficult for the target audience to figure out that it is being bamboozled.

With spinning, however, the listeners are much more likely to be able to recognize that they are not getting a complete and accurate picture, and then rectify the problem by filling in the missing pieces of the story. Specifically, the target audience can compare the spinner's motives with how the spinner put his story together, i.e., what he might have left out, what he emphasized, and what he deemphasized. If there is reason to be suspicious of the spinner's story, the listeners can ask the spinner for additional information, do independent research on the spinner's story, or listen to counter-spinners, who are usually not in short supply when it comes to foreign policy.

The target audience should also be able to defend itself reasonably well against concealment. In particular, it can always ask if there is information available on specific aspects of the subject at hand, and it should expect to be told the truth. None of this is to deny, however, that the target audience might not know all the relevant lines of inquiry. After all, sometimes you do not know what you do not know, and therefore do not know what questions to ask.

To reinforce the point that lying is considered shameful because it is so difficult to detect, let us look at one of the few realms in our daily life where it is acceptable to lie: commercial negotiations where buyers and sellers are trying to reach a price agreement. Consider, for example, a case in which two individuals are bargaining over a commodity like a car or a house. Each person is allowed to lie about his "reservation price," which is the price above or below which he would no longer agree to a deal. Both the buyer and the seller understand that lying — the euphemism is "bluffing" — is part of the game; thus neither side gains an unfair advantage when it lies about the selling price or the purchase price. In essence, we are talking about a fair fight in which neither side can claim that it was wrongly bamboozled by the other side.

Not surprisingly, there is hardly any stigma attached to lying about one's reservation price in business dealings. Indeed, one might argue that this kind of bluffing is not lying, because, to quote the British statesman Henry Taylor, a "falsehood ceases to be a falsehood when it is understood on all sides that the truth is not expected to be spoken." I reject that logic, however, because both the buyer and seller are telling falsehoods that are intended to deceive the other side, which is the essence of lying.

In sum, lying, spinning, and withholding information are all forms of deception, and all three can be contrasted with truth telling. The subsequent discussion focuses on how lies are used to deceive others in the foreign-policy realm. But in practice, deception campaigns invariably involve spinning and concealment as well as lying. In fact, given the opprobrium attached to most kinds of lying, leaders who think that they have good reason to deceive another state or their own public usually prefer spinning and concealment to lying. Nobody wants to be called a liar, even if it is for a good cause. This preference is reinforced by the fact that it is often difficult to lie without getting caught red-handed. Of course, leaders sometimes conclude that they have no choice but to lie for their countries and that circumstances make it feasible to do so. In general, however, lying will be the option of last resort for leaders seeking to deceive another country. 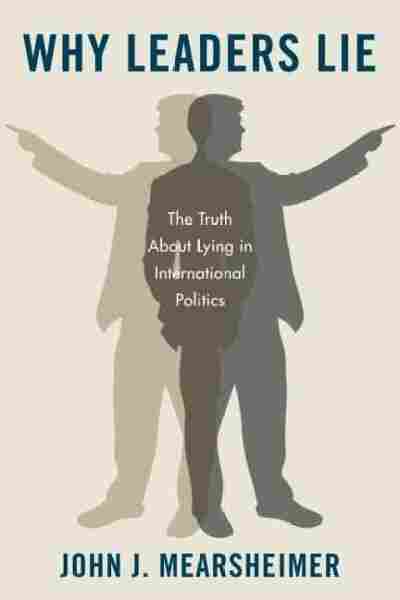 The Truth About Lying in International Politics