Accessibility links
The Charge To GE's CEO: Amp Up U.S. Economy President Obama says he wants to put the economy into overdrive in the next two years. To help in that task, he's called on the CEO of General Electric to lead a new business advisory board. Jeffrey Immelt's assignment is to look for ways to encourage private employers to hire more workers. 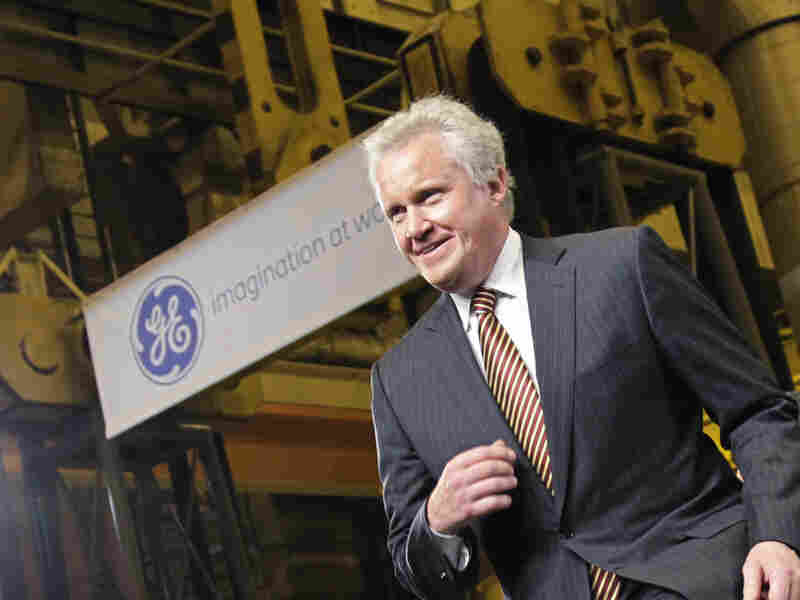 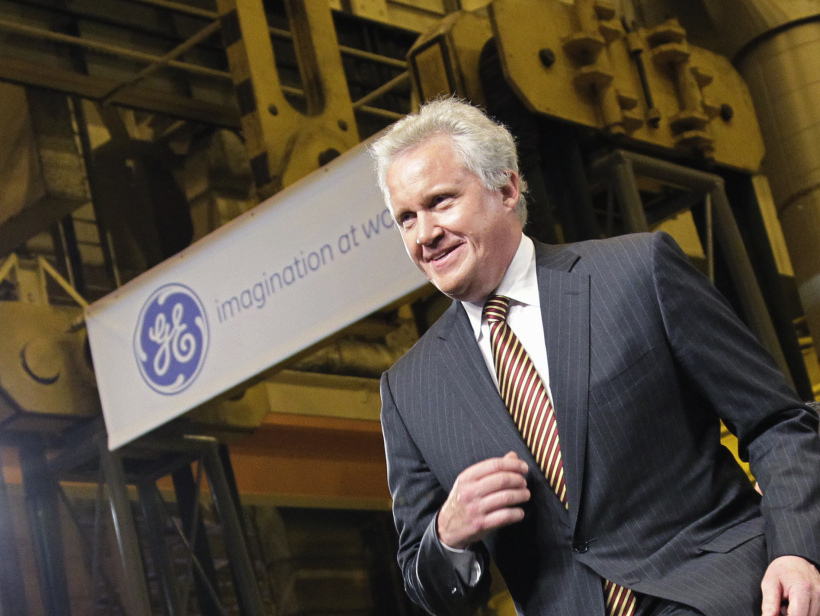 GE CEO Jeffrey Immelt strides to the stage at the GE plant in Schenectady, N.Y., to introduce President Obama on Friday.

President Obama says his job in the next two years is to put the economy into overdrive. To help in that task, he's called on the CEO of General Electric to lead a new business advisory board.

Jeffrey Immelt's assignment is to look for ways to encourage private employers to hire more workers.

Immelt has already been working closely with the White House. He served on an earlier advisory board, and late last year, Immelt joined the president on a trade mission to Mumbai, India, where the GE chief executive expressed great interest in that country's fast-growing demand for electric generators.

Immelt came home from that trip with a contract worth $755 million to supply electric turbines to an Indian power company. Much of the work is being done at a GE factory in Schenectady, N.Y. Obama toured the plant Friday and was excited to see that 90 percent of the factory's output is headed overseas.

"As I was walking through the plant, you guys had put up some handy signs so I knew what I was looking at," he said. "And I noticed on all of them, they said, 'This is going to Kuwait. This is going to India. This is going to Saudi Arabia.' That's where the customers are. And we want to sell them products made here in America."

Boosting exports is a key part of the president's plan to grow the economy, without sending U.S. consumers deeper into debt. He says the Indian contract alone helps to support some 1,600 jobs in Schenectady. But while GE has been adding to its workforce, many other companies have not. Obama says it's great that the economy is growing again, but it's time to translate that growth into more jobs.

"Our challenge is to do everything we can to make it easier for folks to bring products to market, and to start and expand new businesses, and to grow and hire new workers," he said. "I want plants like this all across America. You guys are a model of what's possible."

Toward that end, Obama has appointed Immelt to lead a new President's Council on Jobs and Competitiveness, with the goal of boosting private sector hiring. Immelt wrote an op-ed column for Friday's Washington Post, saying the panel will focus on manufacturing, exports and innovation.

Stock analyst Daniel Holland, who follows GE for Morningstar, says Immelt's own record in those areas is encouraging.

"Most people view him as a thoughtful manager, somebody that's prudent, making sure that the company is able to grow within itself, you know, and doesn't take massive risks with the core franchise," Holland says.

The company that Thomas Edison founded continues to invest a healthy chunk of its money in research and development. And Obama noted that GE is spending millions of dollars on advanced equipment for its Schenectady plant, taking advantage of a new tax break.

The president wants the government to keep making similar investments in long-term growth, even as he looks for ways to cut spending elsewhere in the federal budget. Speaking to his workers in New York on Friday, Immelt said he feels a responsibility to make the United States the most competitive country in the world.

"We know in GE, the future is given to no one. We have to compete. We have to win. And I know that this team can compete with anybody in the world," he said. "We can absolutely do what it takes."

The president says he'll soon be announcing other members of the advisory panel, including labor leaders, economists and other business people. He'll also have more to say about jobs and global competition in next week's State of the Union speech.