Accessibility links
Taking A Walk Into the Lives Of India's Street Kids More than 300,000 children are believed to live on the streets of New Delhi. A walking tour of the area around the railway station introduces tourists to the plight of such children and the efforts of a local nonprofit to help them and, if possible, to reunite them with their families. 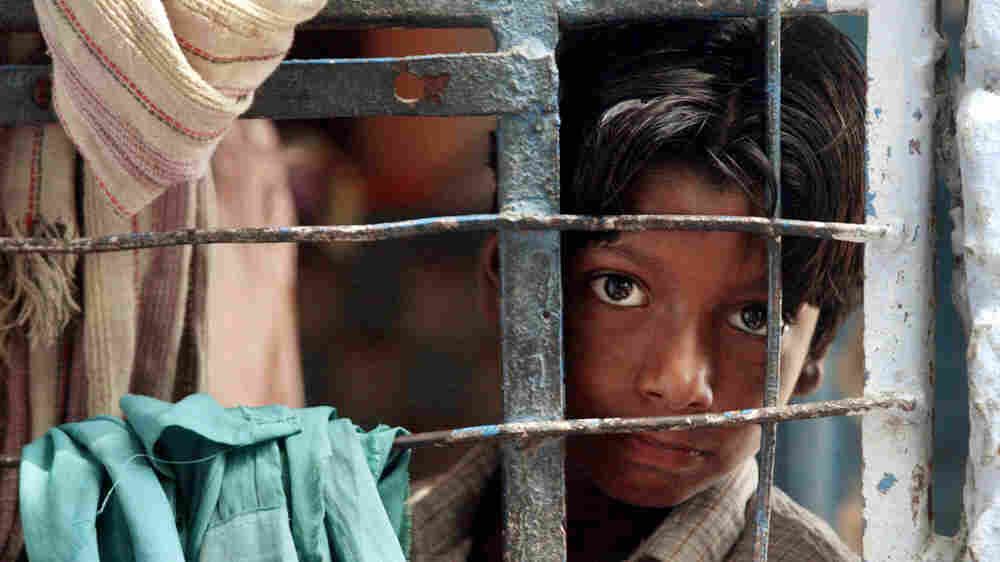 It's noisy, smoky, smelly, crowded and chaotic — not a part of New Delhi that you'd consider a tourist destination. But every morning, a young Indian guide shepherds a dozen or so visitors into the maze of alleys that surrounds the New Delhi railway station.

It's a tour called City Walk, onto the turf of the scruffy kids who beg, steal, shine shoes and smear car windows in an effort to make a few rupees.

The 18-year-old guide, Satender Sharma, is a former street kid himself, so he knows firsthand about the perils and freedoms of living by your wits in the city.

"In this walk," he promises, "I will tell you more about the street life, how children comes on the street, what they are doing." He does it with a deadpan, teasing wit that only fades when he tells how he ran away from home at the age of 11 to escape an abusive father.

"My father used to beated up all our family," he says. "He is taking alcohol. One day he beated my mom very badly, and he killed her."

Like many of the kids who end up on the streets, Sharma stowed away aboard a train and ended up, alone and penniless, at a railway station in New Delhi. 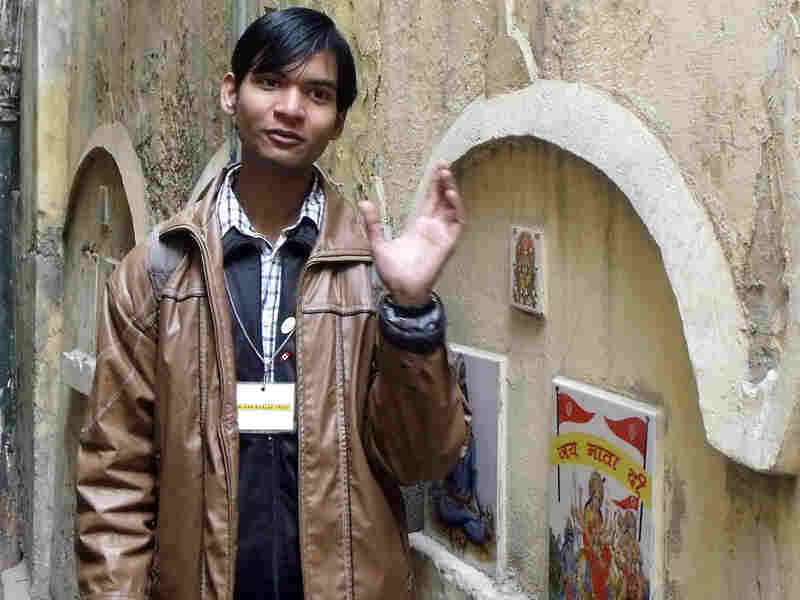 Satender Sharma, 18, is a former street kid who now, as a tour guide for the Salaam Baalak Trust, leads visitors through the narrow alleys where he grew up in New Delhi. Courtesy of Claire Flintoff hide caption

Children in India's railway stations face predators of all kinds, but Sharma learned that boys, at least, can earn a precarious living if they're quick and bold.

Life On The Streets

He leads the tour into a small square, and a scene that could be straight out of Charles Dickens' Oliver Twist. Boys are emptying filthy sacks onto the ground outside the shop of a trash recycler. They're selling bottles and cans that they've scavenged around the neighborhood.

Glass whiskey bottles are the best, he says, fetching about 3 rupees apiece.

"Boys, living on the street, they have many jobs to do — pick-pocketing, begging, working on fruit stall, cleaning cars, shoe shining and selling rubbish," he says. "Doing these jobs, they can earn more than 200 rupees per day."

That's about $4.50, a lot of money in a country where about 80 percent of the population lives on less than $2 a day.

But there's a catch, Sharma says. Street children have no place to keep the money they earn where it won't be stolen — by adults, by bigger kids, and sometimes by corrupt police. They have to spend everything they earn every day.

"Do you know what they spend it on?" he asks. Several of the tourists venture a guess — "Food?" — but Sharma shakes his head. Food isn't a problem.

The kids can get free food at a nearby Sikh temple that feeds the homeless, or steal it from the railway kitchens. There are two main things the street boys spend money on, Sharma explains: drugs and entertainment.

Across from the recycling center, there's a grimy shop with two battered video game consoles. A boy who looks 8 or 9 toggles a pair of karate fighters across the washed-out screen.

"I am expert," says Sharma, who admits to spending thousands of rupees on the games. "I can win any video game."

Another favorite entertainment is the movies, especially on Fridays, when the new Bollywood releases come out. Kids can watch three features in a row, sleep and avoid the police.

They also can do their drugs of choice, sniffing glue and typewriter correction fluid. Sharma explains that kids who do inhalants are usually dead before they reach their late teens.

The fate of girls on the streets is even grimmer than that of boys. Almost all are quickly scooped up by brokers who sell them into prostitution. 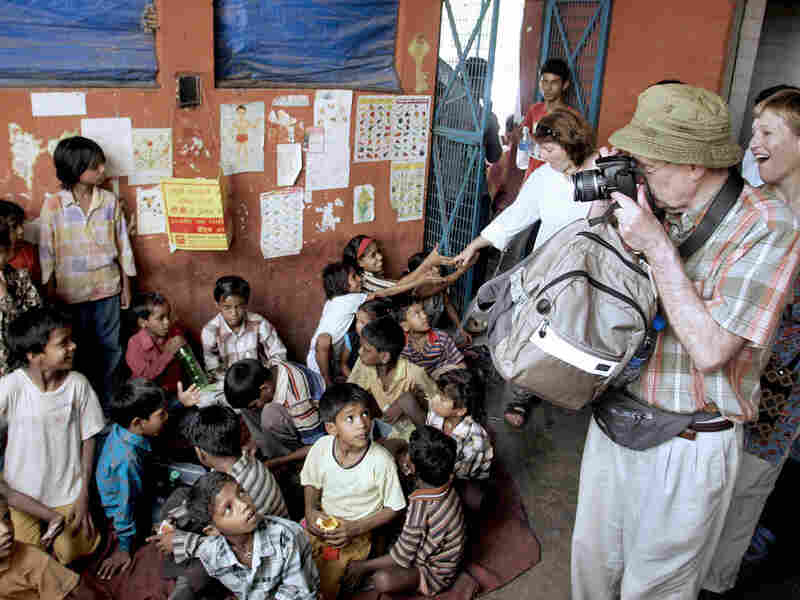 Tourists take photographs of street children at the railway station in New Delhi in May 2006. Salaam Baalak Trust runs two-hour guided tours that take visitors through the chaos of the area. Manan Vatsyayana/AFP/Getty Images hide caption

Sharma takes his tour group to one of the trust's contact points next to the New Delhi train station. It's a minishelter where kids can come for a meal or a place to sleep.

Half a dozen grimy boys huddle over a game board, snapping checker-like pieces into a pile. Sharma says that for many of these kids, life on the street is better than what they left behind, and it offers them a kind of freedom that's hard to give up.

What that amounts to appears to be something between the Lost Boys in Peter Pan and the young savages in Lord of the Flies. It's the freedom not to bathe or go to school, to play video games or go to movies, to stay out until all hours.

The counselors don't pressure the kids to come in off the street until they're ready, says P.N. Mishra, a member of Salaam Baalak's executive board. Some of them, he says, eventually opt to go home.

"And then we are trying to restore them back to their family. Every year we restore 600 to 700 children in different part of India. When the child is ready, we contact his parents," Mishra says.

Mishra says Salaam Baalak, one of a number of groups helping street kids in India, serves about 3,000 children a year. But that's just a fraction of the more than 300,000 believed to live on the streets of New Delhi. Some estimates put the total number of street children in India as high as 18 million. Government programs don't reach many such children because they don't have documents and are invisible to the system.

No Shame, Just Living Their Lives

There are two categories of street children, Mishra says. Many children on the street are part of homeless families. He says Salaam Baalak focuses on the other category, children "completely with parents, without anchor."

Kids who can't or won't go home can move into one of Salaam Baalak's shelters.

Sharma leads his tour upstairs to the community center where he spent six months, before he trusted the counselors enough to tell them where he came from.

This day is TV day, and about two dozen boys huddle like puppies under blankets while they watch cartoons.

Mishra says the kids can get some schooling there, and medical attention as well. When they're ready for the next step, they can go to one of Salaam Baalak's five homes, two for girls and three for boys.

The tour ends, and very few people who take the walk seem to find it a depressing experience. Most, like American Catherine Farnsworth, say they were heartened by the kids' resilience and spirit.

"There's no shame involved or anything, they're just telling their stories and living their lives," she says.

Sensitizing Visitors To The Children's Plight

Schroeder is the elementary school librarian at the American Embassy School in New Delhi. She has traveled a lot by train during her eight years in India, and she says she was curious about the lives of the children she saw foraging there.

"I always wondered — how do they get there? Where do they go at night? Where are their parents? What do they eat? Why are they not in school?" she says.

When she decided to answer those questions in a novel, she says, her research led her to Salaam Baalak and its tour.

Mishra says the idea for the tour came from a British volunteer who worked at the shelter in 2008. The volunteer conceived of the tours as a way for the older kids to improve their English and gain confidence in dealing with people.

But Mishra says it has helped sensitize visitors, foreign and Indian alike, to the problems of street children.

He says street kids who have gone through the trust's programs have gone on to a variety of jobs, ranging from highway toll collectors to engineers, and they include a Bollywood movie actor and an internationally known photographer.