Accessibility links
The Dismemberment Plan: Back In Business The indie-rock band spent much of the '90s in vans before breaking up in 2003. Now, the much-beloved Dismemberment Plan has reunited with a newly reissued Emergency & I on vinyl and a better sense of its own achievements. 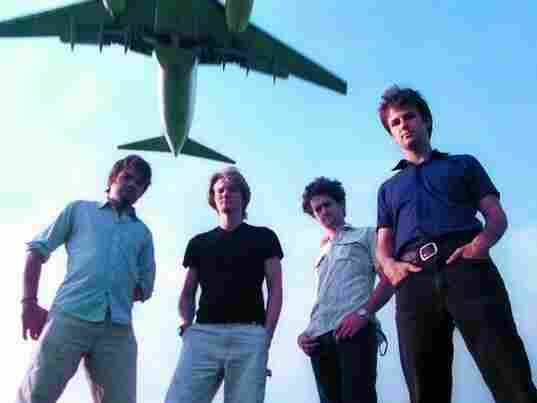 The Dismemberment Plan Courtesy of the artist hide caption 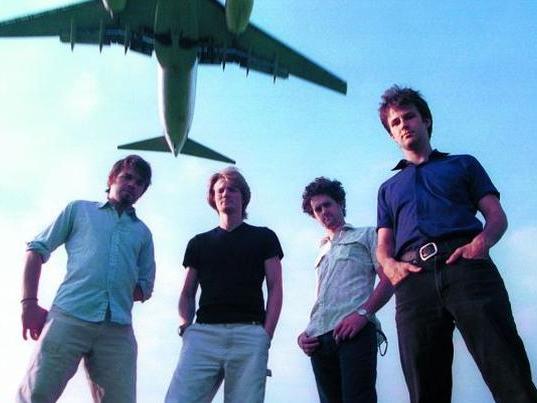 The Washington, D.C.-based indie-rock band The Dismemberment Plan released four albums and toured the world, including an opening stint with Pearl Jam. By 2000, its members had quit their day jobs to keep up with their dedicated following on tour.

But in 2003, 10 years after forming, The Dismemberment Plan broke up, and its members drifted back into the workaday world. Drummer Joe Easley became an engineer at NASA, bassist Eric Axelson works with Rock the Vote's high-school civics program, singer Travis Morrison has a job at The Huffington Post, and guitarist Jason Caddell does freelance audio work.

But it appears that civilian life was too tame. The Dismemberment Plan has reunited with a small number of sold-out tour dates in D.C., Philadelphia, Boston and New York City.

In an interview with Weekend Edition Sunday host Liane Hansen, Caddell says revisiting these old songs has reminded him of his old guitar style.

"There are a thousand little details that you don't ever notice about your playing and your communication until you've been away from them for a long time," Caddell says. "To hear us play now — and we've been using the record as a reference — compared to then, it is a pretty astounding difference. I do feel like my priorities as a musician are so much different than they were then."

The band also just reissued its most popular album, Emergency & I, on vinyl.

"Records do sound different than CDs, but frankly, I don't think any of us are sitting at home in our cardigans with our pipes in front of the hi-fi," Caddell says, laughing. "There's so much about vinyl records that's more than it happens to be an analog sine wave as opposed to a bunch of bits in a row. There is that echo — 'This is what music used to be' — that I think is emotionally resonant with some people."

So no more jewel cases, then?

"You're pushing on these little plastic things in the middle with your thumb to make it pop out," Morrison says. "You might crack the CD. It's a hard, shiny, plastic, unpleasant, unhappy little medium."

There are so many moving parts in any Dismemberment Plan song — bits of punk, hip-hop and R&B. How does a song like Emergency & I's "Back and Forth" go from inception to creation?

"It's a miracle," Morrison says, laughing.

Morrison says the verse structure in "Back and Forth" is based on "It's Alright Ma (I'm Only Bleeding)" by Bob Dylan.

"The chorus — I was walking to work and I started singing it to myself," Morrison says. "And it was almost like I had this feeling of a song, but I didn't know how it sounded. I didn't know what it was. Then I went to work. Then we had rehearsal that day. I walked in, and Eric [Axelson] and Joe [Easley] were playing the groove. It was almost like walking into a space where they had been playing it for all eternity. And I was like, 'That's the song I was writing.' "

Morrison says he may come up with an idea at home, but when the band gets together, it all gets thrown out the window in the name of "collective creation."

"We still are four nerds that love music and love to bounce it off each other," Caddell says.

On The Cusp Of Club Life

At the time in 2003, it seemed like The Dismemberment Plan was going to finally break out, which is why the breakup seemed surprising.

"The truth of the matter is that we had been doing it for 10 years, and it's a lot of work," Caddell says.

When the band members returned to the working world, they didn't come back to standing ovations every time they did something well. But Morrison says band life is harder anyway.

"I've never had co-workers that rode me as hard as my bandmates," Morrison says, laughing. "Everything that I've had to deal with in business — I'm in computer programming for advertising, which is hectic and insane and the clients freaking out. You know what? I was in a van driving 25 hours overnight to get from Seattle to Fargo to open up for Veruca Salt, so you can't tell me nothing."

For Caddell, the transition was solidified by the band's achievements.

"By the time 2003 rolled around, I think what I personally needed was a direct feedback loop of accomplishment," Caddell says. "There's a far distance — between standing on stage and reading record reviews and having people buy your music — there's a big difference between that and directly knowing that you've done a good job, you've achieved something, and that your bank account is starting to get out of the emergency zone. Those things are hugely important.

"It's extraordinarily ironic, because people who haven't done it think, 'Oh, you must feel so fulfilled and lauded,' " he adds. "On the one hand, I do feel very much like we've — and not to get crazy about it — but we've done good things in the world, the four of us. I think we have that as an achievement. Now, it's time to do the next thing."