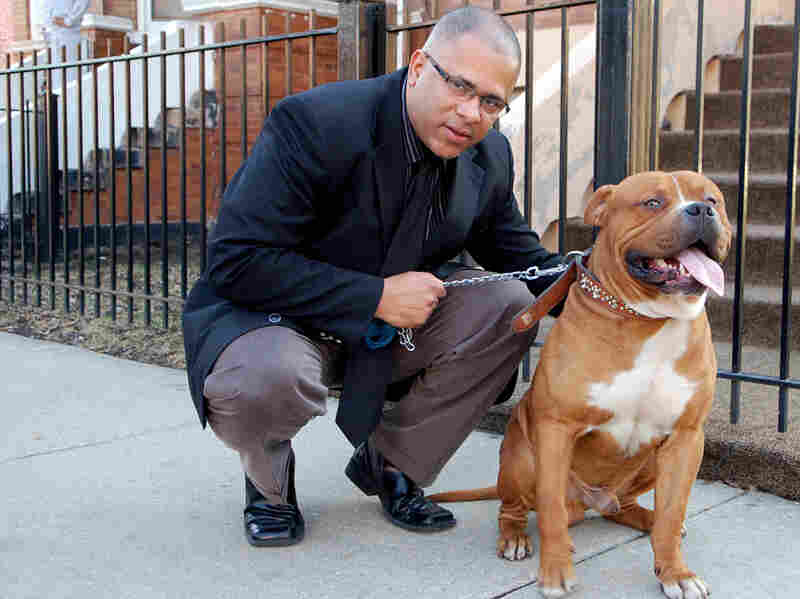 Tio Hardiman grew up in the projects on Chicago's West Side and helped set up the End Dogfighting program about five years ago. Courtesy of Tio Hardiman hide caption

Philadelphia will be the newest city to launch the Humane Society of the United States' anti-dogfighting program, thanks in part to a recent donation by the Philadelphia Eagles, the team that picked up convicted dog fighter Michael Vick.

On Chicago's West Side, about a dozen people — many of them kids with dogs in tow — attend a recent pit bull training class. Terrence Murphy, 14, kept his gray and white pit bull, Cookie Monster, close by. Like Murphy, about 40 percent of the people in the weekly class used to fight dogs.

"The guys that be on the block, they used to go in abandoned houses and fight dogs, and me and my cousins used to go in there and watch them, so we thought it was cool, so then we started getting dogs and started fighting dogs," Murphy says.

Murphy has been bringing Cookie Monster here for about eight months, and before that, he brought another dog named Elmo.

"We used to fight dogs, and the ones [with] the most injuries, we used to just hang them and kill them, beat it to death, set it on fire, drown it — all of that unhumane stuff," Murphy says.

He says one day an outreach worker told him about the pit bull training team and convinced him to give it a shot. He says now he likes how Cookie Monster respects him.

Another former dog fighter, Anthony Pickett, says he quit after he agreed to fight a dog named White Boy, a dog his kids loved.

From WHYY: Combatting dogfighting in Chicago, a model for Philadelphia

"He won, but he came out real bloody and I couldn't take him back home to the girls, and they asked about this dog for a month, almost two months. But I had to hide him and sew him back up. That stopped me right in my tracks," Pickett says. "I didn't want to hurt my kids. That was their favorite dog."

Pickett says White Boy wasn't what he used to be after that fight.

"His ear was damaged, around his face was damaged, his tail was almost broke off from fighting — because everything happens in fights: Eyes get gouged out, ears get torn off, legs," Pickett says.

Now, Pickett works for the End Dogfighting campaign, traveling neighborhoods recruiting pit bull owners for the program. It's a tough job because many of the fighters are making money and suspect he's with the police.

'A World Of Opportunity'

Tio Hardiman grew up in the projects on Chicago's West Side and helped set up the End Dogfighting program about five years ago.

He says kids like Terrence Murphy might win $100 during a dogfight, but in a high-end operation similar to what Vick was involved in, the sums can be much larger.

Hardiman says Vick represents a lot of young people across the country who are growing up in a culture of violence.

"He's giving his testimony to young men and women across America and educating these guys, saying, 'Look, I fell from a high place in society, and you normally don't get a second chance.' "

Hardiman says there's a connection between fighting pit bulls and struggling to live in a violent society. He says keeping guys out of the world of dogfighting is good for them, their dogs, their families and the rest of the community.

"Now this guy is making sure his dog gets his shots, he's making sure it's eating a balanced diet. All these things are very important. These guys are making sure the dogs get the proper exercise. It opens up a world of opportunity for these young men," Hardiman says.

Back at the training class in Chicago, trainer Jeff Jenkins leads the class and lays out the ground rules. Among the rules is no hitting, kicking, screaming or yelling at dogs.

The dog owners are lined up along the walls, the dogs at their sides. Orange cones and some hurdles for the dogs to jump over are set up around the room.

Murphy leads Cookie Monster through the routine with ease. Murphy is proud of the dog, and Jenkins is proud of both of them.

Jenkins says it isn't easy to get kids like Murphy to come to the program. But once they try it, he says, it can change their lives. He hopes the skills Murphy and the other dog owners learn in class will help them excel in school, with their friends, and in other real-life situations.