Accessibility links
Moms Who Can't Breast-Feed Find Milk Donors Online Health officials say that moms participating in milk exchanges like those organized on Facebook are endangering their babies' health. But the moms say they're giving their children the healthiest possible start in life. 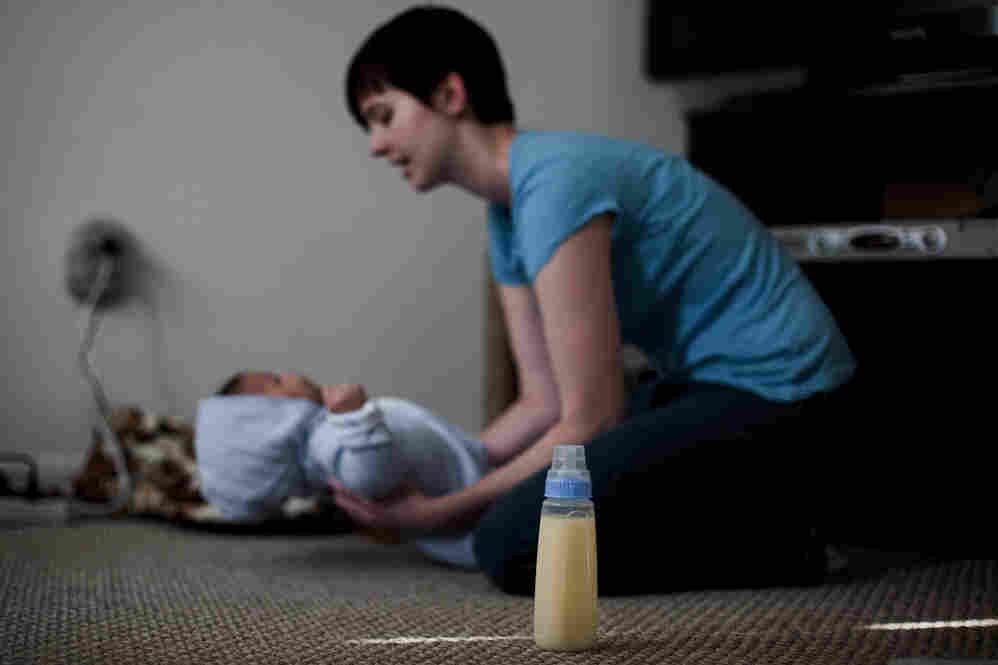 Lindsey Ward dresses her 4-month-old son, Joshua, in her home in Woodbridge, Va., before making a "milk run" to receive donated breast milk from another mother. Ward believes that breast milk has greater health benefits for her son than does formula, but she is unable to pump adequate amounts of breast milk for him. Jonathan Makiri/NPR hide caption

New mothers are told again and again that breast milk is the healthiest food for babies. But not all mothers are able to nurse.

Some of them have discovered they can still give their babies the benefits of breast milk by feeding them milk donated by other moms. And they're finding those moms on Facebook. The federal government thinks that's a bad idea, but that's not stopping the milk-sharing. 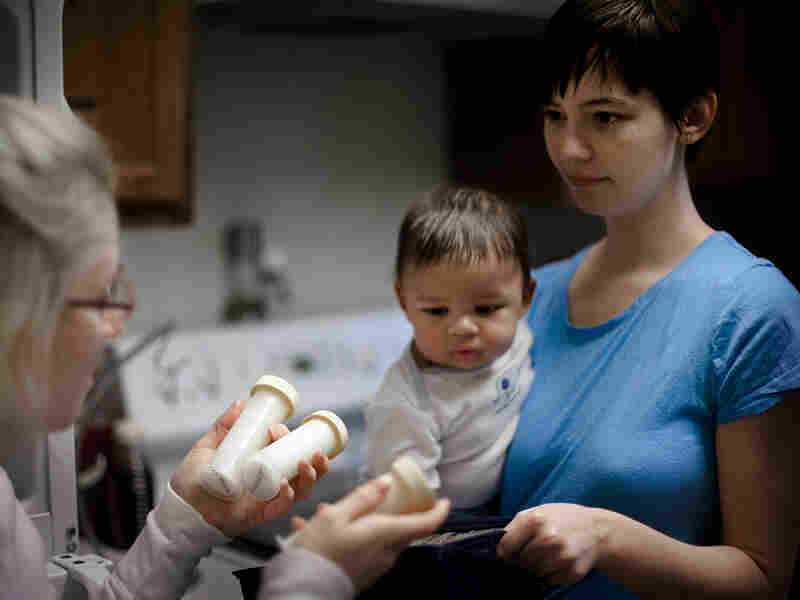 Ward picks up her donated breast milk from fellow mother Natalie Erdossy in Reston, Va., on Jan. 12. Erdossy is one of more than eight nursing mothers who have donated milk to Ward. Jonathan Makiri/NPR hide caption 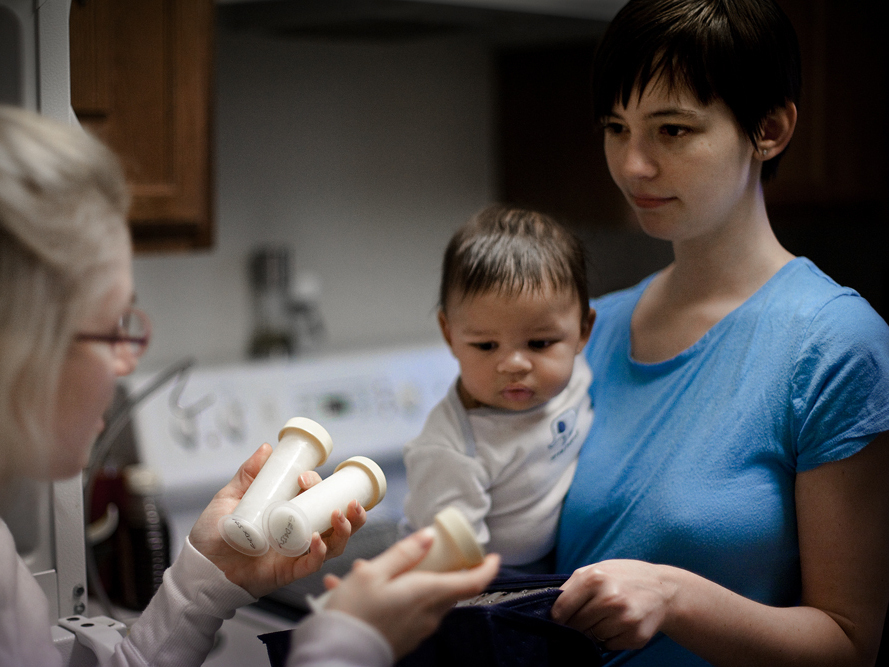 Ward picks up her donated breast milk from fellow mother Natalie Erdossy in Reston, Va., on Jan. 12. Erdossy is one of more than eight nursing mothers who have donated milk to Ward.

Lindsey Ward fed her first child with formula, but she was determined to nurse her second. Despite her determination, and plenty of help and advice, breast-feeding was a struggle. "I fought through the pain, and it still didn't work," she says. By the time Joshua was a month old, he had gained just 1 ounce.

So Ward, a 23-year-old, got online and started looking for help. She found a Facebook group called Eats on Feets.

The group was started in July 2010 by Shell Walker, a midwife in Phoenix, who had helped clients find breast-milk donors when they had a health crisis or other problem that kept them from nursing. There are now more than 110 local Eats on Feets discussion groups on Facebook, so that women can meet other mothers in their area who are interested in milk-sharing.

The goal is for women to share milk without being paid. Sometimes mothers receiving donated milk offer to pay for milk bottles.

For most doctors — including those who advise the American Academy of Pediatrics — there is little question that breast milk is superior to infant formula because of its health benefits to newborns. Breast milk is believed to have immunity-boosting properties that formula lacks, and children who are breast fed seem to have slightly higher IQs than those on formula. The length of time a child is breast fed also seems to matter. A national nutrition survey by the U.S. Centers for Disease Control and Prevention showed that American infants who were exclusively breast fed for more than six months had lower risk of pneumonia and ear infections than those breast fed for four to six months.

Breast milk reigns within the medical community, but many women prefer formula or are required to use it for health and other reasons. And some women feel guilty about it. But according to the Mayo Clinic, formula is just fine for healthy babies who have typical dietary needs. As a controversial 2009 article published in The Atlantic last year arguing against breast-feeding pointed out, "the breast is probably best. But not so much better that formula deserves the label of 'public health menace.'"

Within a few days after Ward posted a message asking for help, women started offering milk. The mothers had pumped milk for their own babies and had extra. Ward started driving to women's houses with a cooler in the trunk to get the frozen milk safely home.

One night, she drove to a rest area on I-95 to meet a truck driver from West Virginia. His wife had a freezer full of breast milk, and the trucker had offered to make a milk run. "This is kind of awkward and not exactly safe," she remembers thinking. Then, she saw the big red truck with logs on the back pull in.

The trucker gave her a cooler with 706.5 ounces of human milk — more than 5 gallons. "I gave him a big ole hug because I was very thankful," Ward says. "Before I started driving I got on my cell phone on Facebook and messaged his wife, and said, 'I hugged your husband. I hope that's OK!'"

But the Food and Drug Administration and the American Academy of Pediatrics take a dimmer view of the breast-milk-sharing phenomenon. They say that informal breast-milk sharing puts babies at risk of HIV, hepatitis B and other infectious diseases.

"We cannot recommend the sharing of breast milk over the Internet," says Lori Feldman-Winter, an associate professor of pediatrics at the University of Medicine and Dentistry of New Jersey, and a spokeswoman for the American Academy of Pediatrics. Instead, Feldman-Winter says, mothers in need should turn to one of the country's 11 breast-milk banks.

Breast-milk banks take donations from nursing mothers who have been tested to make sure they don't have infectious diseases. The donated milk is pasteurized to further ensure its safety. Premature babies get first dibs on the milk because human milk gives them a host of benefits — including protection against necrotizing enterocolitis, a serious intestinal disorder. Parents of full-term babies can also get breast-milk bank but it's expensive.

Ward did contact a milk bank in North Carolina in her search for breast milk for Joshua.

Ward knows that there are health risks in using milk that comes directly from donors. She asks potential donors about their health and lifestyle. 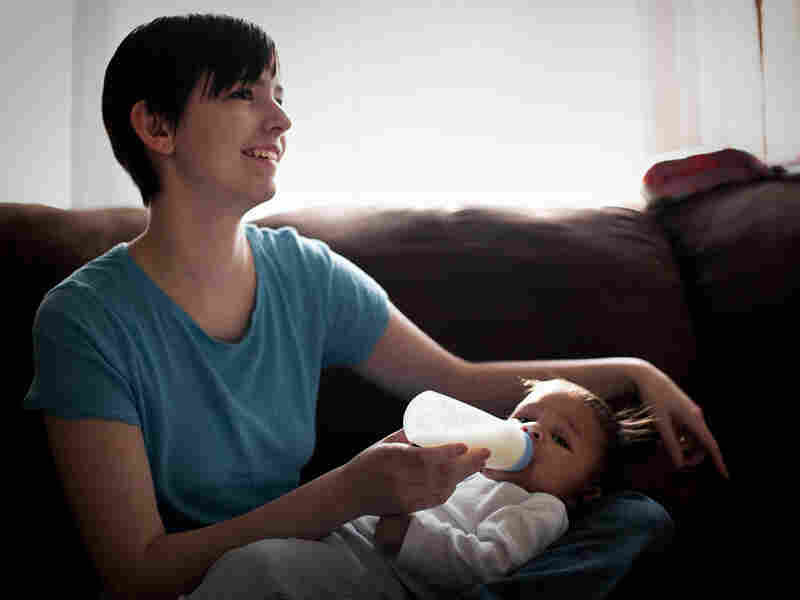 "I felt so relieved that he was able to get breast milk," Ward says. "I felt like a failure because my body wasn't doing what it was supposed to do." Jonathan Makiri/NPR hide caption 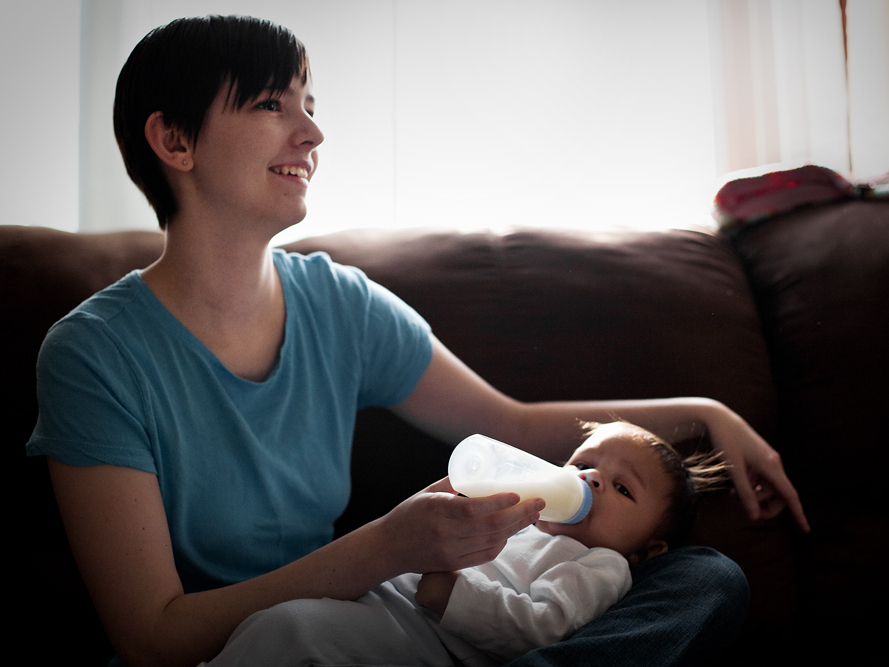 "I felt so relieved that he was able to get breast milk," Ward says. "I felt like a failure because my body wasn't doing what it was supposed to do."

"I ask if they consume alcohol, if they have a history of STDs," she says. "Anything I think is a safety concern. Anything that I wouldn't do while I was breast-feeding." The ultimate assurance, she says, is that these women are feeding their own babies with this milk.

Many women who seek donated milk for their babies ask the donors for the results of blood tests proving that they don't have infectious diseases, Walker says.

"We talk about safety a lot on the forums," she adds. "On top of that we have the first-hand contact with the moms to see." Ultimately, she says, "A mom donating milk doesn't want to be responsible for a sick baby."

Natalie Erdossy is one of those donors. She met Ward briefly through their midwife and later learned about her quest for donor milk on Facebook. "I have oversupply anyway," says Erdossy, 28, of Reston, Va. "I figured I have extra, and she needed it. There's no point throwing it away. That's just crazy."

Ward's milk runs have been so successful that the chest freezer she and her husband, Adam, bought to store the milk is full to the brim. And Joshua is thriving.