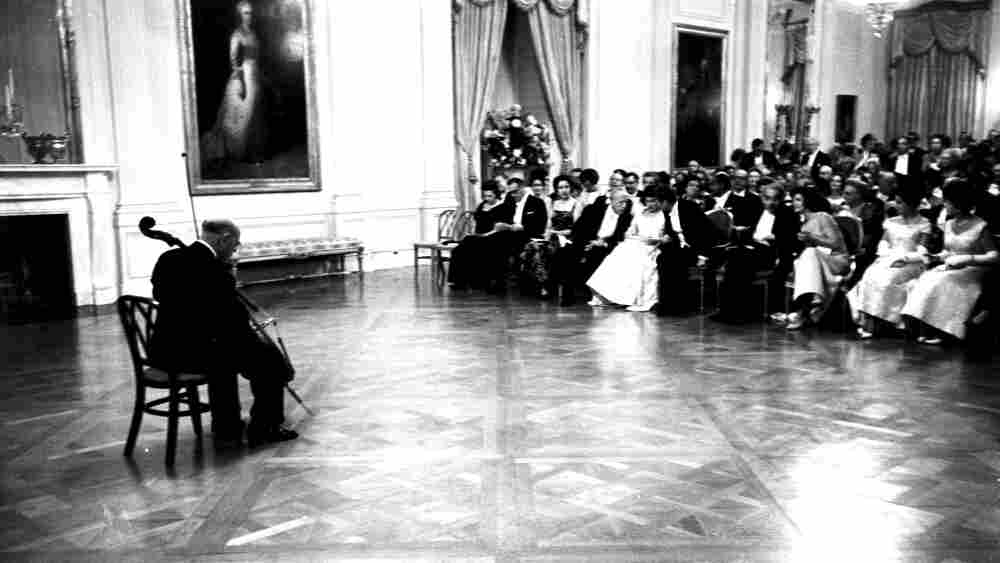 In the first year of John F. Kennedy's administration, cellist Pablo Casals famously performed "The Song of the Birds," a traditional Spanish folk melody that had long been his signature. He told Kennedy it symbolized his hopes for freedom and peace in the world. Cecil Stoughton/John F. Kennedy Presidential Library hide caption

Perhaps no president in American history celebrated the arts more visibly than John F. Kennedy. So it seems only natural that the performing-arts center that bears his name is staging a star-studded arts festival to commemorate the 50th anniversary of his inauguration.

For those of a certain age, the image of that day 50 years ago is tattooed on memory. A blizzard had whitewashed the city and nearly ground traffic to a halt. The sky was so crystal clear, the white snow so dazzling and the glare of the sun so blinding that poet laureate Robert Frost couldn't read the poem he had composed for the event. So he put aside the wind-ruffled pages and recited from memory another of his poems, "The Gift Outright."

Frost was the first poet asked to recite at an inaugural — a harbinger of things to come. 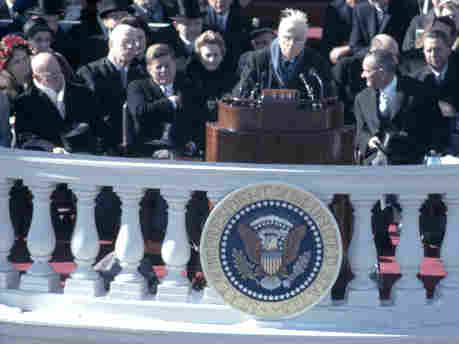 Robert Frost recited his poem "The Gift Outright" at President Kennedy's inauguration — a dazzling winter's day in Washington, so bright and windy the poet laureate had to forgo his prepared text and work from memory. B. Anthony Stewart/National Geographic/Getty Images hide caption 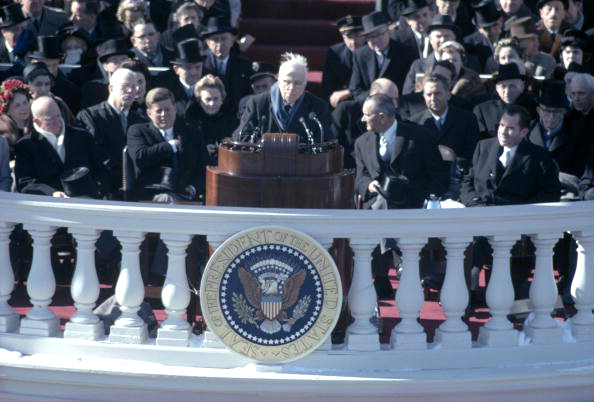 Robert Frost recited his poem "The Gift Outright" at President Kennedy's inauguration — a dazzling winter's day in Washington, so bright and windy the poet laureate had to forgo his prepared text and work from memory.

'Our Contribution To The Human Spirit'

"I am certain that after the dust of centuries has passed over our cities, we, too, will be remembered not for the victories or defeats in battle or politics, but for our contribution to the human spirit," President Kennedy said in November 1962, in one of his many speeches promoting the arts. And then almost a year later, less than a month before his death: "I look forward to an America which will reward achievement in the arts as we reward achievement in business and statecraft."

"The Kennedys really believed that the people who make art, the people who write books, the people who have great scientific thoughts, had a very important role to play in society, and they honored them by focusing on them and putting a spotlight on them," observes Kennedy Center President Michael Kaiser.

This was a time, remember, when there were almost no regional theaters in America — or dance companies, or operas. There was no government support for the arts or humanities, no National Endowment for the Arts. Indeed, in the nation's capital, Congress had only just appropriated money to build a cultural center — a center that would, when it came to fruition years later, be called the John F. Kennedy Center for the Performing Arts.

Now, 50 years later, the center is celebrating that pivotal moment for arts in America. The project, which continues through Feb. 6, has been on the drawing board for five years.

The Kennedy Center's Kaiser says that in planning such a festival, there is no point in being "encyclopedic." Rather, the aim is to hit artistic highlights, from jazz to classical music, from ballet to tap dance.

The events in this particular sampler include a new symphonic work featuring the words of President Kennedy, with Morgan Freeman and Richard Dreyfuss narrating. There are performances by the American Ballet Theater — the organization that Jacqueline Kennedy Onassis chaired until her death — and exhibits featuring the work of artists with disabilities, because the Kennedys were such proponents of opportunity for the disabled. There are events featuring young artists, as well as established ones. 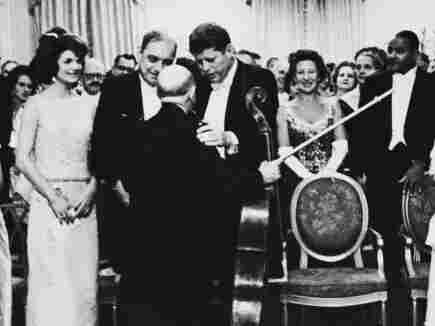 Casals (speaking to President John F. Kennedy, center, with First Lady Jacqueline Kennedy at left) was at 85 one of the world's greatest living musicians — and a Spanish exile who had long refused to play publicly in countries that recognized Spain's authoritarian government. He accepted Kennedy's White House invitation after much soul-searching, as a signal of his hopes for the new president's administration. Keystone/Hulton Archive/Getty Images hide caption

'The Most Glamorous Event Of The Year'

Though the Kennedy presidency would be just a shooting star in the firmament of U.S. history, it would light up the arts in America as never before. And no event would more symbolize that than the 1961 White House concert played by cellist Pablo Casals, by then almost 85 years old.

From The White House Concert

A Spaniard in exile, Casals had refused for years to play publicly in the United States, or any country, that recognized the Spanish government of dictator Francisco Franco. But in the first year of his presidency, Kennedy sent an emissary to Casals' home in Puerto Rico to see if the cellist would relent and play at the White House.

Casals widow Marta Casals Istomin says her late husband struggled with the invitation. Finally, he sent a letter to the president declaring, "May the music that I will play for you and for your friends symbolize my deep feelings for the American people and the faith and confidence we all have in you as leader of the free world."

And so, on a November night in 1961, a glittering audience of women in ball gowns and men in white tie and tails gathered at 1600 Pennsylvania Avenue. Among the guests was Alice Roosevelt Longworth, daughter of Teddy Roosevelt — the last president for whom Casals had performed, nearly 60 years earlier at the dawn of the 20th century.

There were all the big names in American music: composers from Leonard Bernstein to Aaron Copland, conductors from Eugene Ormandy to Leopold Stokowski.

"There was electricity," says Casals' widow. "There was something [in the air] — that people were here for something important."

She admits she was nervous.

"Casals was 85 years old, and although I knew he was all right — you know, these emotions can sometimes affect you."

Then he put bow to string.

"When I heard the first few notes," Marta Casals Istomin says, "I knew it was going to be all right."

At the end of the program, there was silence, then explosive applause. Casals walked over to President Kennedy and said, "Now I will play for you the 'Song of the Birds,' which for me means my nostalgia for my country, and my hope for freedom and peace."

The Spanish folk song was Casals' signature piece, one he had played at many benefits and humanitarian concerts over the decades. Sung at Christmas in Spain, it was traditionally a cheerful song, its tempo fast. But Casals had slowed it down, transforming it into a heartbreakingly mournful ode. On a recording of the White House concert, you can hear that emotion — not just in the music, but occasionally in a tiny sound Casals himself makes, a sound close to a small cry.

The next morning, a photograph of the concert would be emblazoned across the front page of The New York Times. The Kennedy Center's Michael Kaiser was a boy then, but he remembers the excitement the evening generated.

"It affected the way all of us viewed culture," Kaiser says. "This was the most glamorous event of the year." And, he says in amazement, "It was a cello recital!"

ABC's Diane Sawyer, in Washington for the opening of the Kennedy Center festival last week, remembered the huge buzz caused by the Casals recital. It penetrated even her teenage consciousness in Kentucky, though she confessed she had no idea then who Casals was.

Tuesday night, the pieces Casals hand-picked for that night in 1961 — music of Couperin, Schumann, Mendelssohn and Beethoven, plus of course that melancholy Spanish song — will sound again within earshot of the great bronze bust of the late president that stands watch in the Kennedy Center foyer. Emanuel Ax will be at the piano, on a bill with the Kalichstein-Laredo-Robinson Trio. And the man bowing the cello? Yo-Yo Ma.