Accessibility links
Foreign Policy: Tunisia Teaches Us About Democracy As Tunisia struggles to establish a new government after the upheaval of dictator Zine el-Abidine Ben Ali, Steven Heydemann of Foreign Policy argues that the U.S. must face the fact that efforts to promote democracy in Arab societies have not paid off. 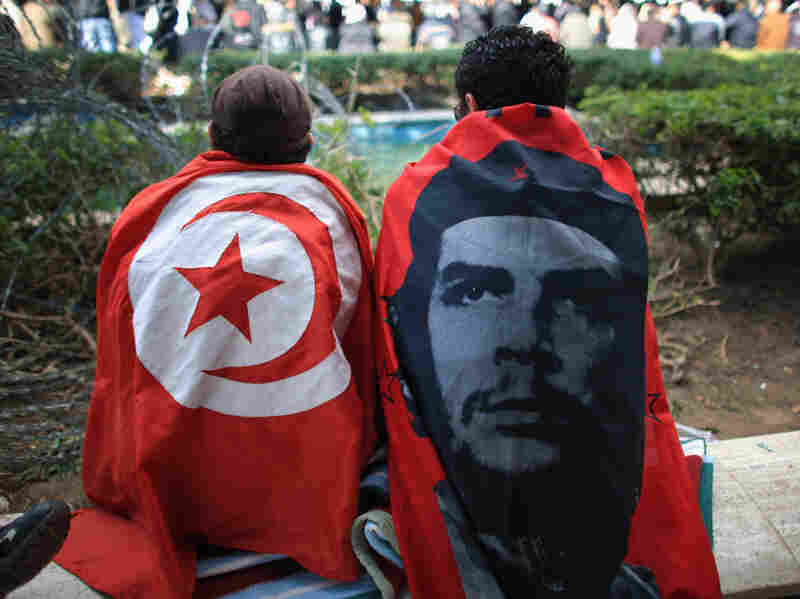 Protesters draped in flags rest outside the Tunisian prime minister's office in Tunis, Tunisia. This month, Tunisia overthrew their dictator, Zine el-Abidine Ben Ali. Since then, the country has been struggling to establish a new government. Christopher Furlong/Getty Images hide caption 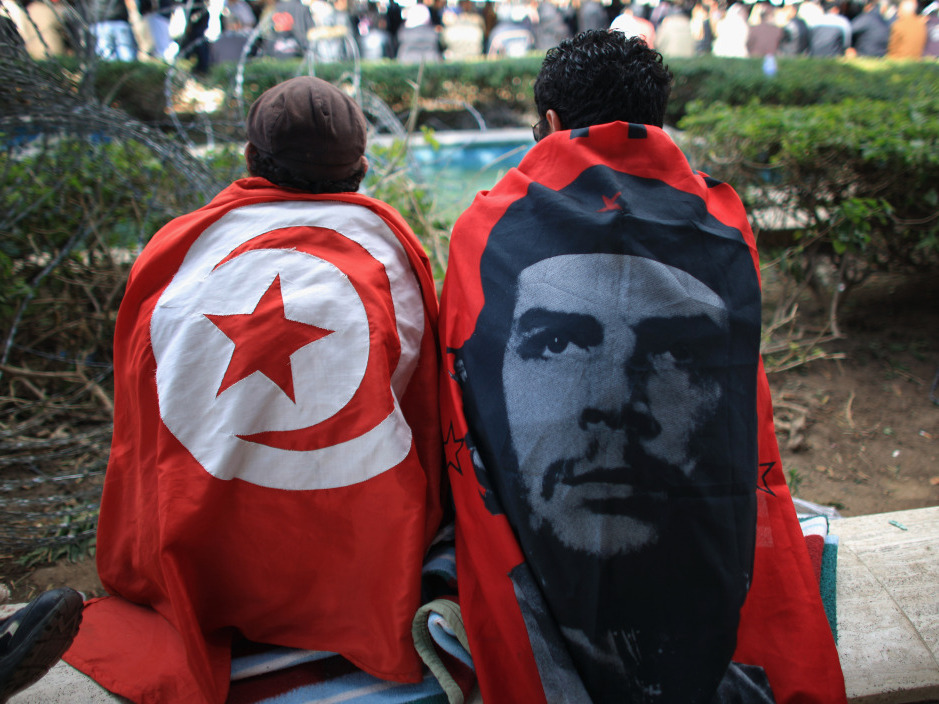 Protesters draped in flags rest outside the Tunisian prime minister's office in Tunis, Tunisia. This month, Tunisia overthrew their dictator, Zine el-Abidine Ben Ali. Since then, the country has been struggling to establish a new government.

Steven Heydemann is a senior vice president at the United States Institute of Peace.

Even as Tunisians struggle to create a new political order, the popular overthrow of Tunisia's dictator, Zine el-Abidine Ben Ali, is reshaping politics across the Middle East. That's the bad news. Arab regimes have often been criticized as sclerotic and archaic; they are neither. Over the past two decades, they have confronted and overcome a wide range of challenges that have caused authoritarian governments to collapse in many other world regions. Arab regimes have demonstrated their resilience in the past, and they continue to do so in the wake of the Tunisian uprising. If the United States and its allies wish to exploit the Tunisian example to widen processes of democratic change in the Arab world, they will need to adapt as well. Tunisia holds lessons both for Arab autocrats and for Western promoters of democracy. Which lessons turn out to be decisive will depend, if only in part, on whether democracy promoters demonstrate the same flexibility and responsiveness shown by Arab regimes.

Authoritarian regimes in the Arab world have shown remarkable agility over the past two decades. They have absorbed and survived the shock of the political transformations of 1989, the democratization of Eastern Europe and the collapse of the Soviet Union. Through trial and error, they have developed strategies for managing pressures for political reform and fending off the democracy promoters of the West, in part by appropriating the rhetoric of democracy and turning it to their own advantage. They have learned how to control Islamist political participation, regulate new media technologies, and broker new divisions of labor between state and market in pursuit of economic development. In several cases, including Syria, they have safely navigated leadership successions that were seen as moments of vulnerability for regimes that built huge personality cults around their leaders.

Like their democracy-promoting adversaries, authoritarian regimes too have built capacity, honed their best practices, and assessed lessons learned. In the process, they have insulated themselves from a Tunisia-like scenario. They remain repressive but are more permissive toward political oppositions than was Tunisia under Ben Ali. They have created space for moderate Islamist movements to participate in electoral politics, as long as they don't do too well. They regulate the media, both new and old, but offer more scope for political expression. Access to economic opportunity is politicized and personalized, corruption is widespread and corrosive, and inequality is high and growing. Yet in contrast to Tunisia, other Arab regimes have made it possible for larger segments of society to benefit from market-oriented economic reforms.

Now, the challenge to Arab regimes comes from within, a popular uprising that forced a long-ruling, brother autocrat out of power with shocking speed. Not only has every other regime in the region been shaken by Ben Ali's rout and his humiliating search for refuge — they have already begun to respond. Across the Arab world, regimes are already taking preliminary steps to mitigate the anger of marginalized youth and address unemployment rates that are among the world's highest. Algeria's government has increased its purchases of wheat to prevent bread shortages that might incite protests. In Kuwait, the government is giving every citizen $3,500 (1,000 Kuwaiti dinars) to counter the effects of rising food prices. In Egypt, the government has embargoed new economic reforms that might further erode its already tattered social safety nets. Small-scale protests over working conditions and wage grievances are receiving prompt attention. Presidential hopeful, Gamal Mubarak, who still views himself as the most likely successor to his father, gave a speech calling on the government to do more to raise living standards for Egyptians. In Syria, France's refusal to grant Ben Ali refuge, as well as the West's support for regime change, is being spun in a self-serving fashion as an object lesson for any Arab leader foolish enough to think of the West as a reliable protector. Whom could they have in mind? Saad Hariri perhaps?

Less visible reactions to Tunisia are no doubt under way, as well. It would not be surprising to learn of conversations between Arab regimes and Western capitals, both offering and seeking reassurance, like the widely reported call last week between Presidents Mubarak and Obama. Nor would it be surprising to learn that Arab regimes are undertaking their own risk assessments and adopting strategies to reduce their vulnerability to a Tunisia-like scenario.

These measures are only the beginning. There is little question that we will see further and more sustained reactions from Arab regimes in the months and years ahead. As in the past, these may lead to real changes in patterns of authoritarian governance and, perhaps, real improvements in the living standards of Arab citizens. What these early indicators clearly signal, however, is that Arab regimes are determined that Tunisia not become the trigger for a regionwide process of authoritarian collapse.

If Arab regimes are learning from and adapting to events in Tunisia, is the Obama administration doing the same? What lessons does Tunisia hold for U.S. efforts to promote democratic change in the Arab world? It is early days yet in Tunisia's uncertain path from the breakdown of an authoritarian regime to real democratization. Yet it is already becoming clear that the success of Ben Ali's regime in crushing and fragmenting opposition forces has created enormous obstacles to the construction of a new political order. In so thoroughly dominating a political space, the immediate legacy of Ben Ali's regime — and a leading threat to its democratic prospects — is the incoherence and inexperience of his opponents and their flailing attempts to navigate between the Scylla of the old order's restoration and the Charybdis of a descent into chaos that might provoke direct military intervention. If Tunisia is an extreme instance of the weakness of opposition forces, it is hardly alone; other Arab regimes suffer from similar deficits.

For more than two decades, the United States has worked to overcome these gaps, investing heavily in civil society capacity building and political party development. Unfortunately, as the Tunisian experience has revealed all too clearly, these investments have not paid off. What might improve the opposition's odds in other Arab states? One necessary step is a shift in the focus of democracy promotion programs. However painful it might be, it is long past time to acknowledge that efforts to build the democratic capacity of Arab societies has largely failed. Building democratic capacity cannot, on its own, create the openings that are needed for opposition movements to operate, gain experience, and establish themselves as credible alternatives to current regimes. It is time to change course and adopt a strategy aimed at containing the arbitrary power of authoritarian regimes.

To date, the United States has been reluctant to adopt such a strategy, preferring to promote reform in ways that are less likely to antagonize so-called Arab moderates. Such approaches have their value, but they are far from sufficient; we can see their consequences in the stumbling of Tunisia's opposition as it struggles to construct a democratic political order.

There are a number of ways that a containment-oriented strategy could be implemented, but one linchpin of such a strategy should be a concerted effort by the United States to secure the removal of emergency laws and security courts that give legal cover to the arbitrary exercise of political power by Arab autocrats. Egypt has lived under emergency laws since 1981, Algeria since 1992. They have been in effect in Syria since 1962. In Jordan, powerful state security courts were established in 1991 when martial law was abolished. Democracy promotion may not be sufficient to bring about the next Tunisia, but what it can do — by pushing harder to create space for oppositions to develop — is ensure that if and when the next Tunisia happens, there will an experienced and credible opposition ready to step in and complete the transition from authoritarianism to democracy. That would be good news, indeed.