Accessibility links
Oscar Nominations: 'King's Speech' Takes 12, To Nobody's Surprise This morning's Oscar nominations were headed up by The King's Speech with 12, followed by True Grit with 10. There weren't many surprises, although Inception missed out on one major award. 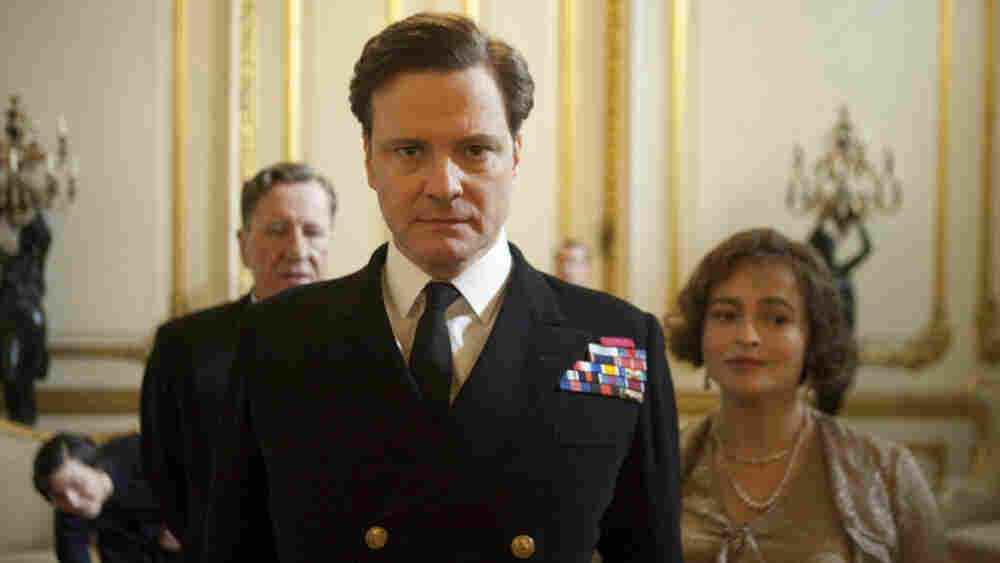 Geoffrey Rush, Colin Firth and Helena Bonham Carter were all nominated for their work in The King's Speech, which led this morning's Oscar nominations with 12. /The Weinstein Co. hide caption

Last year's Academy Award nominations were contentious in some quarters — making room for 10 Best Picture nominees led to claims that some didn't belong there, while others argued that worthy pictures (everything from Star Trek to A Single Man) had been unfairly overlooked.

There will be less of a flap about this year's nominations, which went largely as expected this morning. Those 10 Best Picture slots went to 127 Hours, The Kids Are All Right, The King's Speech, Black Swan, The Social Network, Inception, The Fighter, Winter's Bone, Toy Story 3, and True Grit. Still, for a set of nominations that delivered so few surprises, they managed to do a reasonably good job of recognizing very fine films and actors. (Here's a list of the major nominees.)

The King's Speech led with 12 nominations, including major-category nods for its screenplay; actors Colin Firth, Helena Bonham Carter, and Geoffrey Rush; and its director, Tom Hooper. Behind it were True Grit with 10 nominations, and Inception and The Social Network, both with eight.

Also making a strong showing was the Boston boxing film The Fighter, which had seven nominations, all in prominent categories — three for its acting (Christian Bale, Melissa Leo, and Amy Adams, all in supporting categories — nothing for lead Mark Wahlberg), one for its screenplay, one for its director, and one for its editing, in addition to Best Picture.

In particularly good news, the marvelous, disquietingly still Ozarks-based drama Winter's Bone, a film that seemed at risk of being nudged out of a bunch of different categories and forgotten, wound up earning four nominations. And they're all big ones: Best Picture, Best Adapted Screenplay, Best Actress (for near-rookie Jennifer Lawrence), and Best Supporting Actor candidate John Hawkes — an intriguing actor you may well know from a large backlog of character work on television (including a late run on Lost), whether you recognize his name or not.

One minor surprise was that Joel and Ethan Coen were nominated for Best Director for True Grit, alongside David O. Russell (The Fighter), Darren Aronofsky (Black Swan), David Fincher (The Social Network), and Hooper. That nudged out expected nominee Christopher Nolan, who directed the infernally complex Inception. Also showing up a little less than some expected was Ben Affleck's film The Town, which pulled in only a Supporting Actor nomination for Jeremy Renner after being talked up for a possible Best Picture spot.

The least familiar acting nominee to the audience watching on Oscar night may be Jacki Weaver, nominated as Best Supporting Actress for Animal Kingdom, an Australian crime film. She'll face Helena Bonham Carter, Adams and Leo from The Fighter, and Hailee Steinfeld from True Grit — but back to that in a bit.

Perhaps the biggest shocker was over in Best Documentary, where one of the most-discussed docs of the year, Waiting For Superman, didn't make it, although two other buzzed-about films, Exit Through The Gift Shop and Restrepo, did.

As for snubs, there are a couple of things I found disappointing, but none of them are at all unexpected: I'd have liked to see more recognition for Blue Valentine, but the nomination for Williams is something. I also hoped Tangled might grab a Best Animated Feature nomination, but since I can't argue with Toy Story 3 and didn't see the other two (How To Train Your Dragon and The Illusionist), I'm in no position to complain. Furthermore, for the second year in a row, the expanded field allowed the big Pixar animated film of the summer to be nominated for Best Picture — last year, it was Up, this year, it was Toy Story 3.

I'd certainly have put Andrew Garfield up for Best Supporting Actor in The Social Network, but that's smaller and less aggressive acting, which, especially from a new-ish actor, can easily and not particularly objectionably be outshone by bigger performances (like Bale in The Fighter) or ones from actors who have been around longer (like Rush in The King's Speech). Matt Damon did some very nice work in True Grit, but if I could only have that nomination or the one for Hawkes in Winter's Bone, I'd take the nominations we got.

It does seem a little odd that Nolan was snubbed for Inception, but other than my sneaking sense that The Fighter is not quite the film it's made out to be aside from a couple of very big performances, I'm not sure who I'd bump out. I was not entirely sold on Black Swan, but I can't take anything away from the careful buildup of its creepy/ridiculous tone, which I do think is well-controlled, and that's partly to the credit of the director. (Interestingly, Black Swan was the one Best Picture nominee not to see its screenplay nominated.)

There's also the fairly dopey decision to shove young Hailee Steinfeld into Best Supporting Actress for what is unambiguously a leading performance in True Grit, but Academy politics being what they are, perhaps that was her best shot at being nominated at all. I wouldn't have had any trouble with her taking the Best Actress spots held by Portman or Bening, both of whom were very good but not as interesting as Steinfeld for my money, but neither of those things was ever going to happen.

You can always sit back and find oddities in the nominations — Blue Valentine has the same number of nominations as Tron: Legacy! — but while both The Social Network and Inception have their detractors, neither of them seems to have as many as The Blind Side and (to a lesser extent) Avatar did last year.

Bottom line? These nominations are likely to be significantly less controversial than the ones that came out a year ago — and to do more to advance the idea that this 10-contender Best Picture field may turn out to be a pretty good idea after all.