Accessibility links
Marines To Secretary Gates: 'We're Relevant' Defense Secretary Robert Gates canceled the Marine Corps amphibious troop carrier and stopped the Corps from going ahead with its stealthy warplane. He's also suggested reducing the Corps by some 15,000 to 20,000 in the coming years. But Marines say they're not only busier than ever — they're irreplaceable. 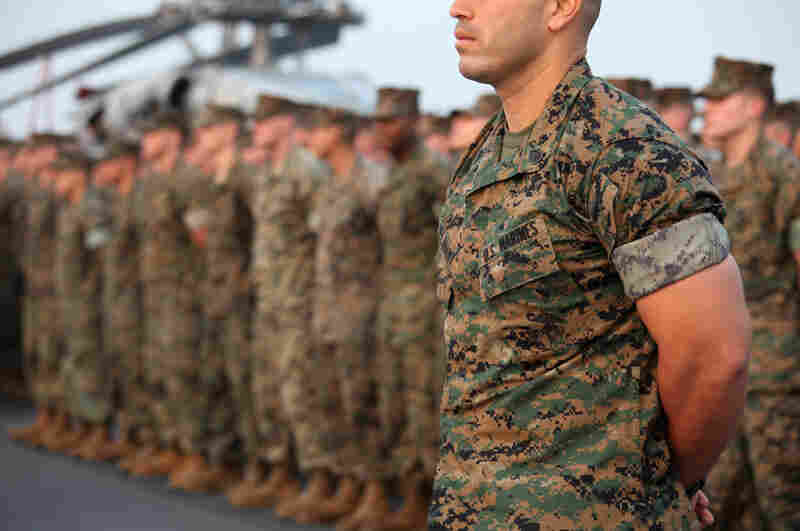 U.S. Marines attend a role call on the flight deck of the USS Essex, a multipurpose amphibious assault ship, in November. Defense Secretary Robert Gates says he wants to reduce the Marine Corps by 15,000 to 20,000 in the coming years. Ed Jones/Getty Images hide caption 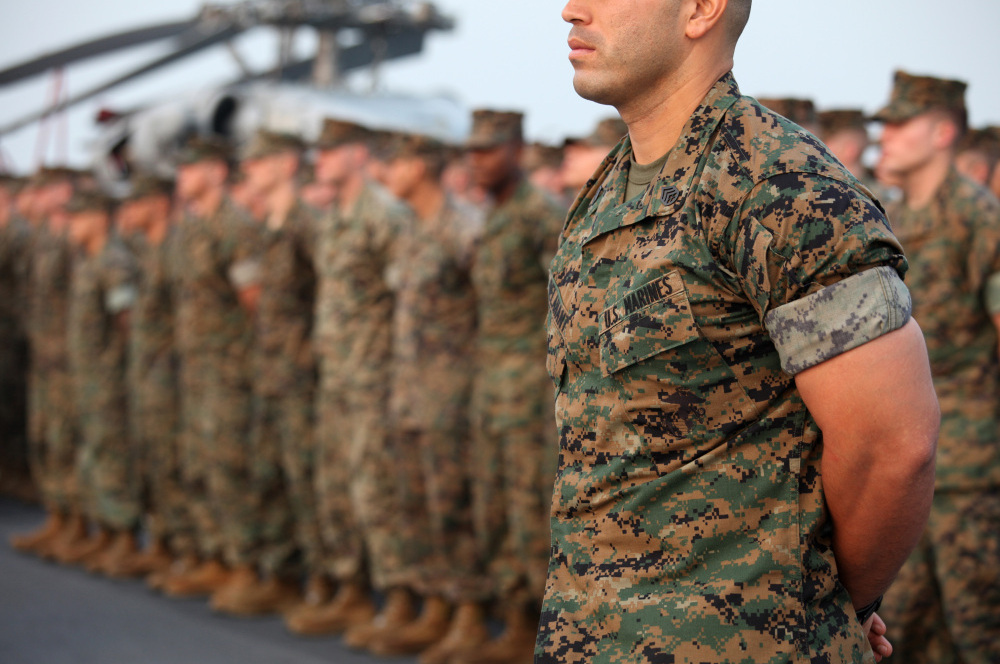 U.S. Marines attend a role call on the flight deck of the USS Essex, a multipurpose amphibious assault ship, in November. Defense Secretary Robert Gates says he wants to reduce the Marine Corps by 15,000 to 20,000 in the coming years.

The Marine Corps is at a crossroads.

The "Soldiers of the Sea" have been fighting on land for a decade in Iraq and Afghanistan.The Corps' amphibious troop carrier has just been canceled; its new fighter jet was postponed.

No More Landing On Enemy Beaches

The Marine Corps has made a name for itself storming beaches: Barbary Coast and Veracruz, Iwo Jima and Inchon.

"For many years now, its core mission has been forcible entry, meaning going ashore in the face of hostile fire to claim enemy beaches and then push inland quickly before defenders regain their balance," says defense analyst Loren Thompson. He says those days may be over.

That's because Defense Secretary Robert Gates has done something that pirates in the 19th century and Japanese troops in World War II couldn't do — he has the Marine Corps reeling.

If the Marine Corps is no longer going to do opposed landing on enemy beaches in the face of hostile fire, then its role will be significantly diminished in the future.

Gates stopped the Marines from going ahead with their Joint Strike Fighter, a stealthy warplane. And he canceled the Marines' amphibious troop carrier, known as the Expeditionary Fighting Vehicle or EFV.

"The EFV, originally conceived during the Reagan administration, has already consumed more than $3 billion to develop, and will cost another $12 billion to build, all for a fleet with the capacity to put 4,000 troops ashore," he said.

That's a lot of money to get a few thousand Marines on the beach. So the Marines will update their decades-old amphibious troop carrier instead.

The cuts and delays to the Marine Corps' budget are symbolic of a larger debate about the role of the Marine Corps in future warfare. Many potential adversaries have sophisticated long-range missiles that could strike the Marines in their landing craft long before they reach the shores.

So Gates already has said it's unlikely the Marines will be hitting the beaches like they did at Iwo Jima.

And Thompson says that raises questions about the relevance of the Marines.

"If the Marine Corps is no longer going to do opposed landing on enemy beaches in the face of hostile fire, then its role will be significantly diminished in the future," he says.

The Marines publicly dismiss talk they're becoming less relevant, and say that attacking enemy beaches is just one of their jobs. Their senior officer, Gen. James Amos, said recently they've been busier than ever.

"Since 9/11, U.S. amphibious forces have responded to crises and contingencies at least 50 times, a response rate more than double during the entire period of the Cold War," Amos says.

That includes everything, from Marines fighting Taliban fighters 10 years ago, to helping Pakistanis caught up in massive flooding last fall.

And the Marines' physical presence, Krulak argues, cannot be replaced by high-tech weapons.

The Marines may argue they're irreplaceable. But Gates has suggested cutting their numbers — not just their weapons. Gates wants to reduce the Corps by some 15,000 to 20,000 in the coming years.

Defense analyst Gordon Adams says that's a higher proportion than the cuts Gates has called for in the Army.

"My view would be that the Army deserves to be significantly cut rather than the Marine Corps," Adams says.

Adams worked on Pentagon budgets in the Clinton administration and thinks Gates' cuts are ill conceived.

"His decisions have by and large been driven largely by technology, costs and efficiency," Adams says.

But not by strategy, he adds. Adams says the Marines are more agile than the Army and cost less. They can handle a range of missions — everything from delivering humanitarian assistance to training foreign militaries to fighting insurgents.

The Marines have no trouble speaking for themselves. In the coming weeks, they'll outline to Gates why they're still relevant.