Accessibility links
'Angry Birds' Flies Toward The Game Board The wildly popular digital game Angry Birds has been downloaded more than 50 million times in the past year. In May, Mattel plans to release a board game that aims to capture the same spirit of revenge and the joy of knocking things over.

Listen
'Angry Birds' Flies Toward The Game Board

Watch a video about the Angry Birds digital game.

Angry birds are migrating out of the digital realm.

The wildly popular game Angry Birds, where players can channel loads of avian aggression into a harmless digital diversion, is about to become a board game.

In May, Mattel plans to release Angry Birds Knock On Wood. It's based on the digital version, which has been downloaded more than 50 million times in the past year.

Whenever Chris Clark, an industrial electronics repairman from Birmingham, Ala., fires up his iPhone or iPad, he's on autopilot. His fingers invariably go to the same place — the game folder containing the Angry Birds app.

Clark has easily more than 100 games downloaded to his devices, but after solitaire, Angry Birds is his favorite. He's not the only one: In 2010, Angry Birds was Apple's best-selling iPhone app. It's also available on Android.

Clark plays Angry Birds during downtime at work, on the sofa, waiting in line and just about anytime he can. In other words, he's addicted.

"You keep retrying the harder levels until you get it, and then you're like, 'OK, next! Next! Come on!' " Clark says. "And you just keep going and, you stop when somebody yells, 'Dinner!' or it's time to go to work."

Part of what makes it so addictive, Clark says, is that it's easy. The player basically hurls birds through a slingshot at a castle. Inside the castle, there are ugly green pigs who stole the birds' eggs.

The Joy Of Knocking Things Down

So the object of the game is revenge. There's also the simple pleasure of breaking things.

Mattel kept this in mind when it designed the board game. 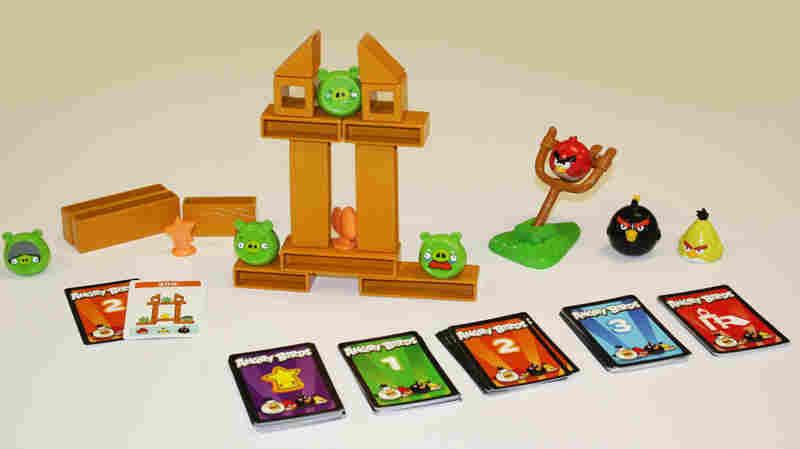 This spring, Mattel plans to release Angry Birds Knock On Wood, a board game based on the wildly popular Angry Birds digital game. Courtesy of Mattel hide caption 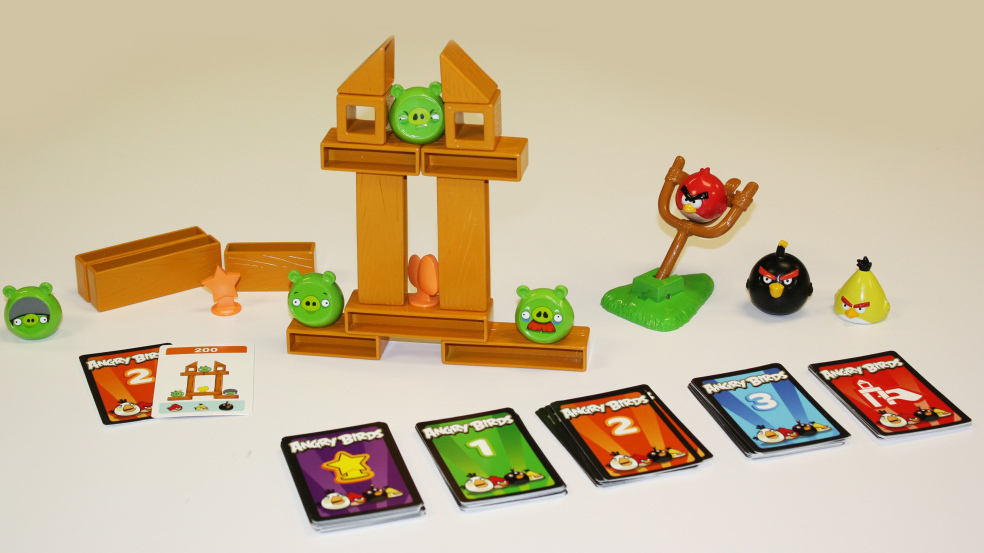 This spring, Mattel plans to release Angry Birds Knock On Wood, a board game based on the wildly popular Angry Birds digital game.

"People love building things so that they could go and knock them down," says Raymond Adler, Mattel's marketing manager for games and puzzles.

The game will sell for about $15 in the spring.

"This is sort of our first venture into bringing things from the digital space into the physical space," Adler says.

Keeping A Foot In Each World

He says Mattel still sells tons of board games, but there's a lot more competition out there. Games played on computers, mobile devices and all sorts of gadgets take away market share from Mattel.

"Some of the ways that we're trying to combat that is exactly with things like Angry Birds," Adler says.

It's a way for Mattel to keep a foot in each world. The challenge in going from digital to board game isn't unlike what a screenwriter faces when making a film out of a book.

True to the digital game, there will be a slingshot. Only in the board game version — and this may come as a disappointment to some — the birds will not come apart and explode on impact with the castle, which players build out of blocks. 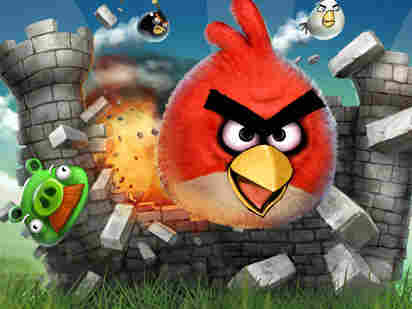 "The birds stay in one piece so that you can play over and over again," Adler says.

The company wouldn't say how much it invested in the Angry Birds board game, but analysts say it can't be much. After all, Rovio, the company that developed the Angry Birds app, pretty much provided the framework.

"They don't have to go out and develop a whole lot of intellectual property to create a new board game," says Paul Swinand, an analyst for Morningstar. "If it's not a success, it's not going to be a black eye or probably even a loss for them because they probably have very good margins on it."

If it sells at all, it'll have been a good experiment for Mattel — a nice way to dip the company's toes into the world of digital apps.

Still, even Adler says it's pretty unlikely that the Angry Birds board game will ever outsell toys like Barbies and Matchbox cars. But, he says, it's definitely a risk worth taking.