Accessibility links
Seeing Movies In The Right Place The practice of actually going out to the movies seems to be taking a hit with some folks, who'd rather stay at home and avoid the crowds and the expense. But there might be hope yet, if you can find just the right place to go.

Seeing Movies In The Right Place

Seeing Movies In The Right Place 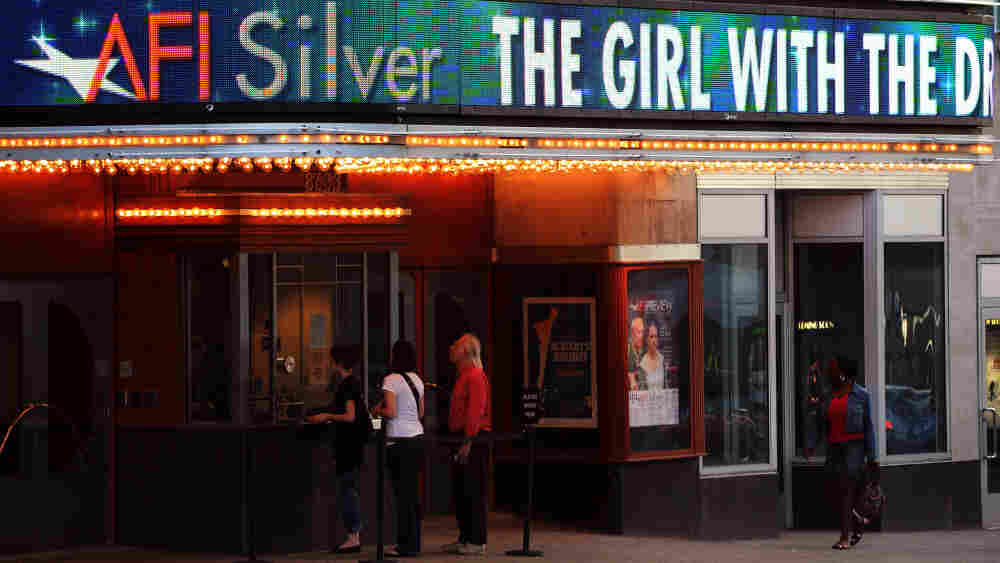 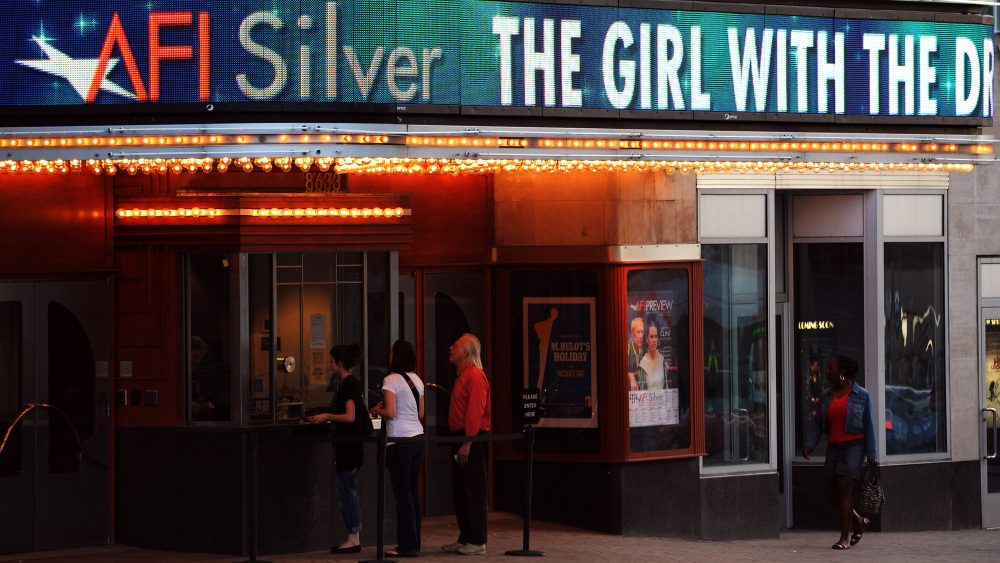 This March 2010 photo shows people in line for the Environmental Film Festival at the AFI Silver Theater.

When I realized this morning that I had actually seen all ten of the Oscar nominees for Best Picture, it felt like something of an accomplishment. Of course, Oscar nominations are not a perfect measure of how good a movie is, and being ten-for-ten doesn't mean you're seeing everything worth seeing — not by any stretch of the imagination. But it means I see more than I did for a while.

And of these ten, I saw nine in theaters. And the one I didn't see in the theater, Winter's Bone, I wish I had.

I like Netflix, I love on-demand movies, I love online streaming, and I'm crazy about the convenience factor of watching at home. But if given the chance, I will still go out and sit in a dark theater.

Yes, I will go, with the four-dollar drinks and the eleven-dollar tickets and, of course, the curse of other human beings and their unpredictability. Sometimes they talk, like the toddler near whom I inadvertently attended True Grit, who would apparently have nominated the film for Outstanding Achievement In BAH BAH A-NUH A-NUH. (This led to my only half-joking suggestion that there should be a new MPAA rating "C," meaning "No one who has to be carried into the theater can be admitted.") Sometimes they attempt to participate (some of you may remember Battlestar Wheaton Shirt from last year's Best Picture Showcase), and sometimes they climb over me ten minutes into the movie, and what is with that, anyway?

But time and again, I make the time and put aside the money (I don't get to nearly enough press screenings to avoid funding the great majority of my moviegoing habit out of my own pocket) to go and sit in a theater. I've watched a lot of films in a lot of settings, and as much as I like a big-screen TV and a comfortable couch and I can see the charm of that, it just doesn't replace sitting in the dark and giving the movie your attention, which is almost impossible when you don't remove yourself from your home environment. The reason to try to keep your phone in your pocket at the movies — and it's hard, I know — is not only to avoid bothering other people. It's to avoid constantly yanking your attention back and forth from the movie to whomever you're texting.

The ritual of settling into a seat, maybe putting a drink in the armrest, and not knowing what's going to happen has not lost its charm for me. It is only at a movie in a theater that I have quite the sort of experience I have when the first few seconds of anything — even something I've already seen — appear. I can feel myself trying to settle, trying to plug into the film. It can be odd; it can even be disorienting. In the opening moments of 127 Hours, I wondered whether I had wandered into the wrong movie, even though it was so thoroughly Danny Boyle that I couldn't have. I still love that; I love it, and it doesn't happen at home. I still would rather do this than sit in a living room with friends, no matter how great the screen and the sound. There's no such thing as home theater, not really: if you're at home, you're not at a theater.

I'm not really all that picky. I used to go to a perfectly respectable movie theater in college where there was a big stain on the screen. (True story!) Every movie starred the stain. (I remember the stain was very good in Parenthood.) I'd still rather go and sit in a theater than sit at home.

But the more I talk to people, the more I think that's partly because I happen to be very fortunate, movie-theater-wise, and the more I wonder whether I'd be so romantic about it if I weren't near, among other places, the AFI Silver. I've talked about this theater before, because that's where they do the summertime '80s movies. I saw Footloose there. I saw Ghostbusters there. And yes, I saw Breakin'.

It's also where I saw 127 Hours, The Kids Are All Right, and Black Swan — not to mention Blue Valentine.

As much as I love having access to one place that will show Ghostbusters and Blue Valentine, a Ginger Rogers retrospective and an Alfred Hitchcock retrospective and a series of screen romances (and that's all just in the month of February), I think I treasure it most because the people who go there like movies.

That's my objection to yelling out during the movie, or bringing your two-year-old. I always think ... don't you like the movie? Don't you want to watch it? Don't you want to give it a chance to be good? That's what you get, I think, from a place where you're surrounded mostly by people who really, really like movies. They're there to give it the best possible chance.

Every time I go, I see this little promo they use to ask people to become members.

I will tell you a secret: I have seen this many, many times, and I still watched it three times while putting this post together. Doesn't it seem ... positive about movies? Charmingly upbeat? Some classics, some oddities, and a little South Park? Not too dreary, not too flaky? It always, always makes me think, "Hey, I need to see a lot more movies."

I still go to the multiplex for multiplex-type movies. I happen to have a pretty good multiplex, too, as those things go. But there's a marked difference in audiences. The AFI audience, on the whole, seems to lay down money to watch the movie. You almost never hear people talking during the show. They generally don't bring babies, and they don't take calls.

The multiplex audience, on the other hand, seems to lay down money for the right to sit in front of the movie and do whatever they want. That's different, and I don't like it as much. It's colder. I don't think it's that the people are any better or any worse; I think it has to do with how much they love being at the movies. And for me to love being at the movies, I have to be with other people who love being there, too.

You probably don't have my theater, but maybe you have a theater. And if you can find one, it might not be time to give up on actually taking yourself out to the movies just yet. It might be that you just need a home — a place where the people come to see a show, and they're ready to put everything else on hold while they get one.