Accessibility links
Ohio's Gov. Kasich: 'Put On The Seat Belt' By mid-March, Ohio's new governor, John Kasich, has to find ways to account for a projected $8 billion budget shortfall. As he looks for cuts, nothing is off the table, he says, except tax hikes. "Get ready for an exciting time," Kasich says. 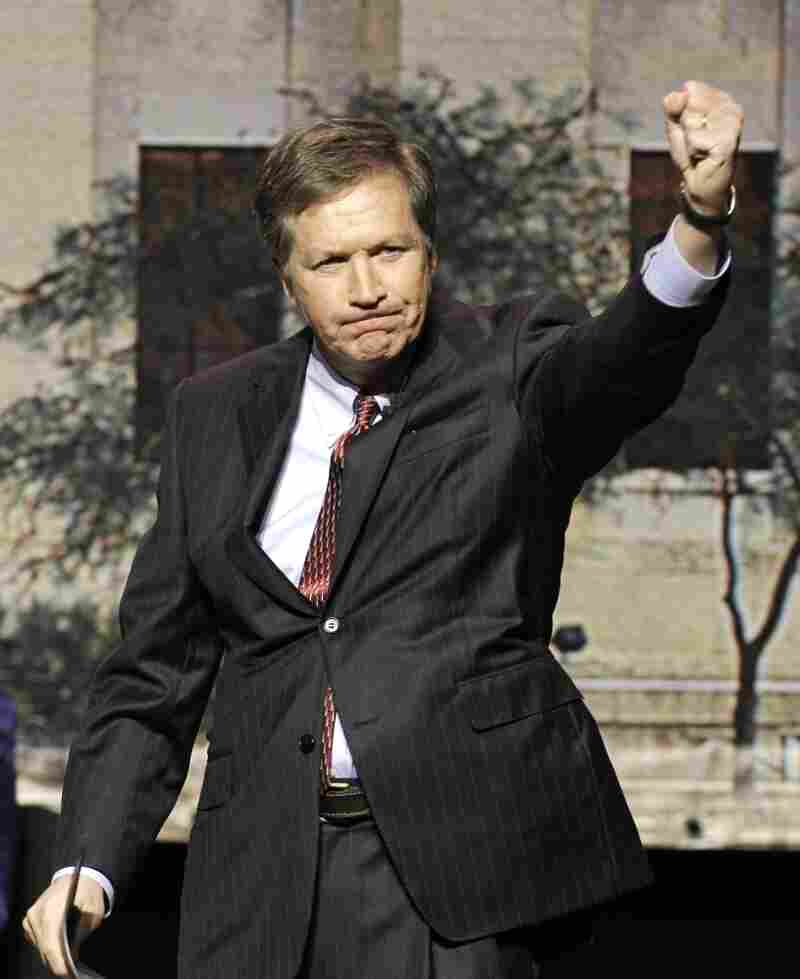 In his inaugural address on Jan. 10, Ohio Gov. Kasich said: "Get ready for an exciting time. Put on the seat belt because we're going." Kasich has to find ways to account for a projected $8 billion shortfall by mid-March. Tony Dejak/AP hide caption 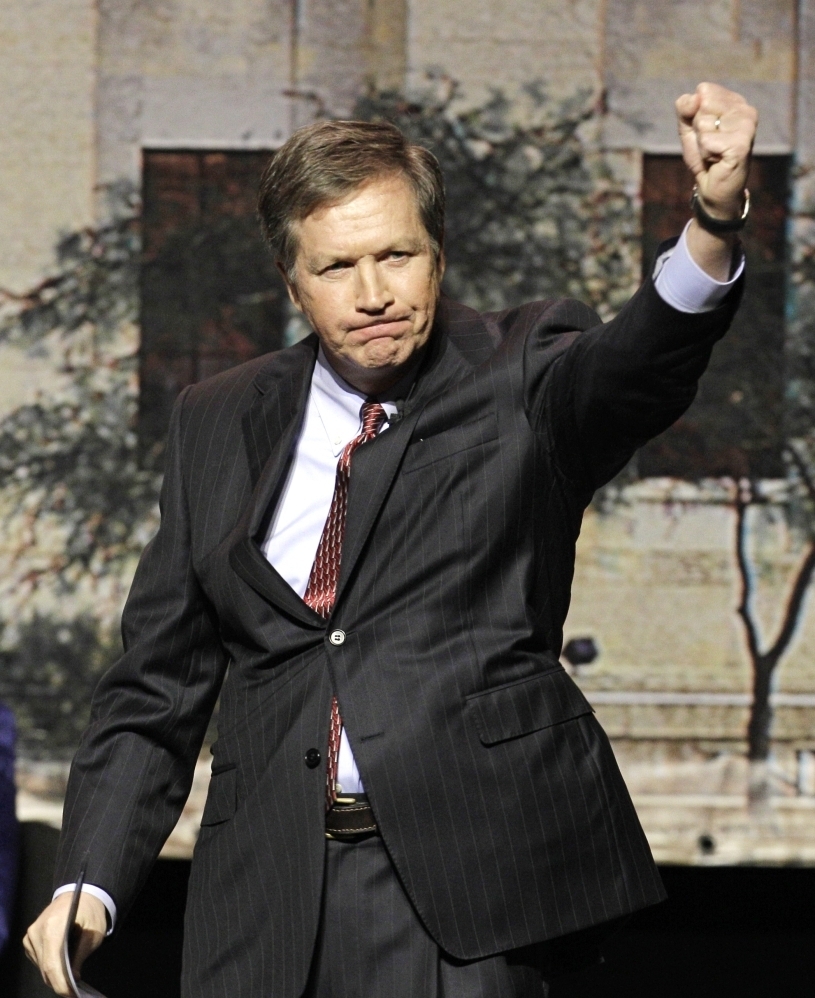 In his inaugural address on Jan. 10, Ohio Gov. Kasich said: "Get ready for an exciting time. Put on the seat belt because we're going." Kasich has to find ways to account for a projected $8 billion shortfall by mid-March.

Ohio's new governor, Republican John Kasich, has just a couple of months to deal with the worst budget deficit the state has ever faced.

Even before he took office, Kasich signaled a blunt approach in dealing with the deficit and in public relations.

Already a deadline looms: Ohio's fiscal year begins July 1. The law requires Kasich to submit a balanced budget and a proposed new spending plan by mid-March to account for a projected $8 billion shortfall.

Still, Kasich says this is what governing is all about, and in his inaugural address earlier this month, he seemed to relish the challenge.

"Get ready for an exciting time," Kasich said. "Put on the seat belt, because we're going."

Kasich spent nine terms in the U.S. House of Representatives, where he chaired the budget committee. After leaving Congress a decade ago, he went to work for the now-bankrupt investment firm Lehman Brothers. Kasich also once hosted a weekly show on the Fox News Channel.

He got elected with just 49 percent of the vote, ousting Democratic incumbent Ted Strickland. Candidate Kasich tapped into long-term economic anxiety in Ohio, where the jobless rate is just below 10 percent and was in double digits for most of 2009 and 2010.

'Everything' Is On The Chopping Block

Ohio State University's Paul Beck says you have to go back to the 1930s to find a budget crisis so serious in Ohio.

"It's a real challenge," he says. "It would have been a challenge for any governor. I think it's a big challenge for Gov. Kasich in particular, because he's already said he isn't going to raise taxes."

There are just no options that are off the table except tax increases 'cause we can't stomach 'em.

The state of the economy, coupled with the nearly 400,000 manufacturing jobs lost in the past decade, have hurt revenues and driven up demand for services in Ohio.

Kasich says government can work better with less. As for what is on the chopping block, Kasich says the government will look at "everything."

"We look at privatization, we look at killing things that don't work," he says. "There are just no options that are off the table, except tax increases, because we can't stomach them."

Under scrutiny is aid to cities, funding for education, possibly privatizing the Ohio lottery or leasing out the Ohio Turnpike. That's just a partial list. Kasich also thinks that huge savings can be obtained through changes to Medicaid. And he promises to take on public employee unions and their pension and benefit plans.

"And of course, the need to have civil service reform, which is bankrupting a lot of our cities through things like binding arbitration," he says.

The push back has already begun. About 300 people representing a coalition of groups, including unions, protested outside the state capitol recently. They argued that slashing programs puts the burden on working people.

Gov. Scott, Ex-CEO, Aims To Run Fla. Like A Business

"To the victor go the spoils, and I understand that," says State Rep. Bob Hagan, a Democrat from the struggling blue-collar city of Youngstown.

Republicans control the Ohio House and Senate. Hagan says given the budget situation, it's wrong to continue to give big tax breaks to higher income residents when they've benefited so much from big tax cuts over the past decade. Hagan has a message for the governor.

"I think he has to be reminded he only got 49 percent of the vote — that's not quite a mandate," Hagan says. "I really want him to understand that there are a lot of people that could really be hurt and devastated by this."

At a statehouse luncheon for Ohio lawmakers from both parties, Kasich asked for Democrats to work with him on the budget — but he also stated a political reality.

"Let's just be honest. Many of you are not gonna go for this budget we're gonna do," he said. "OK, I got that. That's cool. Republicans are gonna probably carry most of the load. I hope I'm gonna be wrong."

Kasich did say to lawmakers that he'd never let political differences get personal. But that doesn't mean Ohio isn't in for some bruising political battles — and they may begin right away.