Accessibility links
In Age Of Tweets, NFL Learns 140 Characters Hurt While Chicago Bears quarterback Jay Cutler sat on the sidelines of last weekend's championship game with an injured knee, his peers were blasting him in Twitter messages that essentially called him a quitter. The hurtful tweets have set off a debate about sportsmanship in the digital age. 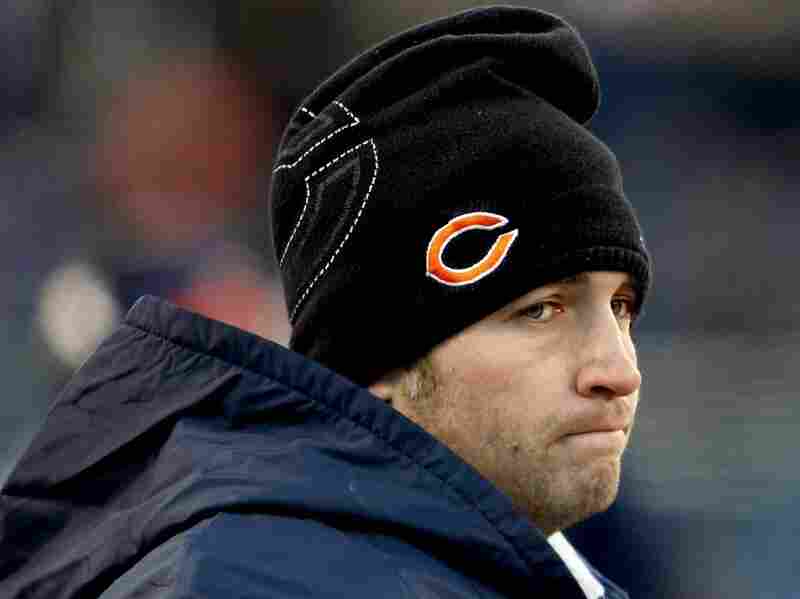 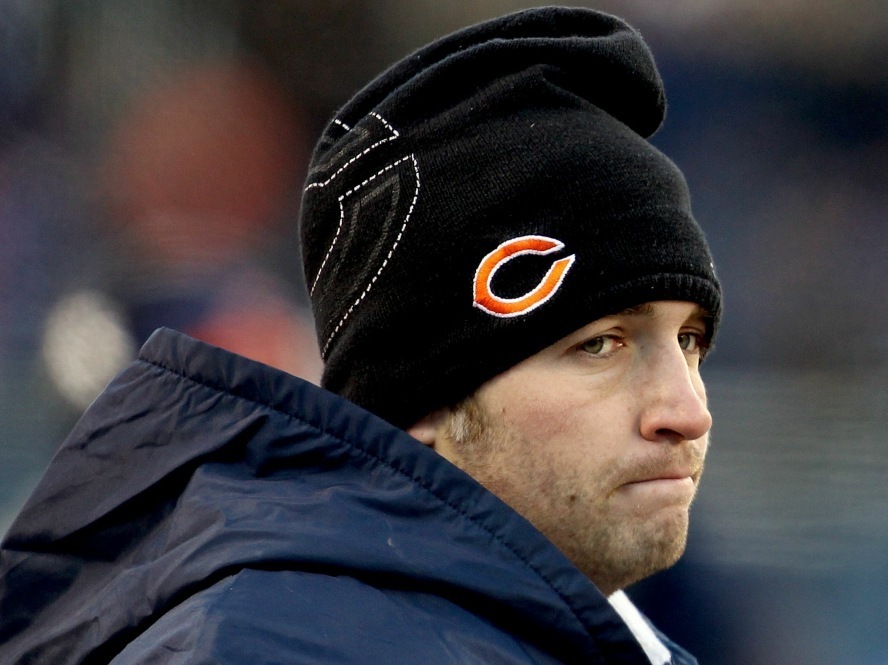 Chicago Bears quarterback Jay Cutler stands on the sideline in the third quarter after leaving the game with an injury against the Green Bay Packers on Sunday. His decision to sit out of the remainder of the game, which Chicago lost, made Cutler the target of critical Tweets from his peers in the National Football League.

It's been a tough week for one of Chicago's most prominent public figures: Chicago Bears quarterback Jay Cutler injured his knee during Sunday's NFC Championship game. He didn't play in the second half of what turned out to be a Bears loss to the Green Bay Packers.

Adding insult to injury, Cutler got blasted by his peers in a storm of Tweets that essentially said he quit on his team, setting off a debate about the messages — and how they were delivered.

For the most part, says Jeff Pearlman, an author and columnist for SportsIllustrated.com, the marriage between athletes and Twitter has been a success.

"I almost think more than ... really good tickets, what fans want is really good access," he says. "Nobody cares if I'm eating Cheerios for breakfast. But for some reason, people really find it interesting that Shaq is eating Honey Nut Cheerios for breakfast or Lebron is thinking this or he's going to that club. It gives fans a very, very good taste of what an athlete's life is and what they're going through."

In return, Twitter gives athletes a marketing tool. For the estimated 500 National Football League players with Twitter accounts, it's a chance to reveal a personality often obscured by pads and helmets. But NFL agent Donald Yee doesn't endorse it with his guys.

"It's not really an issue for us because we counsel them on these kinds of things and try to get them to understand the importance of their words," Yee says.

On Sunday, a bunch of NFL players, current and former, discovered just how their words, even in 140 characters or fewer, can wreak havoc.

Arizona defensive back Kerry Rhodes Watched the Chicago-Green Bay game, as the television audience did, with the same — selective — camera shots. He saw images of Cutler with a hang-dog look, out of the game and seemingly removed from his teammates — all while a third-string quarterback tried to rescue the Bears.

Rhodes tweeted, "Cmon cutler u have to come back. This is the NFC championship if u didn't know!"

Then the Seattle Seahawks' Raheem Brock tweeted. "Cutler u little sissy," he wrote.

The comments were startling for several reasons. NFL players know how hard the game is. Cutler may not be the most popular guy, but his toughness is pretty widely accepted. And, Yee says, only Cutler knew how his knee felt.

Historically, athletes haven't said much of anything publicly — a reality immortalized in the 1988 baseball film Bull Durham, where veteran Crash Davis tutors rookie "Nuke" LaLoosh on the art of the sports cliché.

But Sunday proved how, in the raw, unedited world of Twitter, athletes can be anything but boring, even if it means violating the code of never publicly criticizing a fellow athlete.

Is raw better than boring? Fans and reporters might say so, but even some of the players who tweeted Sunday apologized later. True remorse or more marketing? We don't know. But Pearlman, who at 38 says he straddles the social media generation gap, says he knows how the NFL players could have avoided trouble in the first place.

"I feel like the one thing that's missing in communication these days is the process of putting a letter in an envelope and putting a stamp on it," he says, "which gives you a little time to think about what you're saying before you say it."

A letter may seem a little quaint — and not much solace for Cutler, who was asked about the tweets after Sunday's game. Sitting in front of his locker, Cutler pleaded no comment. Then, according to one reporter's account, Cutler bit his lip as tears welled.