Accessibility links
In Tunisia, Women Play Equal Role In Revolution Tunisian women have access to birth control and abortion. They have the same rights to divorce as their male counterparts. And they are playing just as vital of a role in the country's revolution. Now, they must continue their fight to keep religion out of politics. 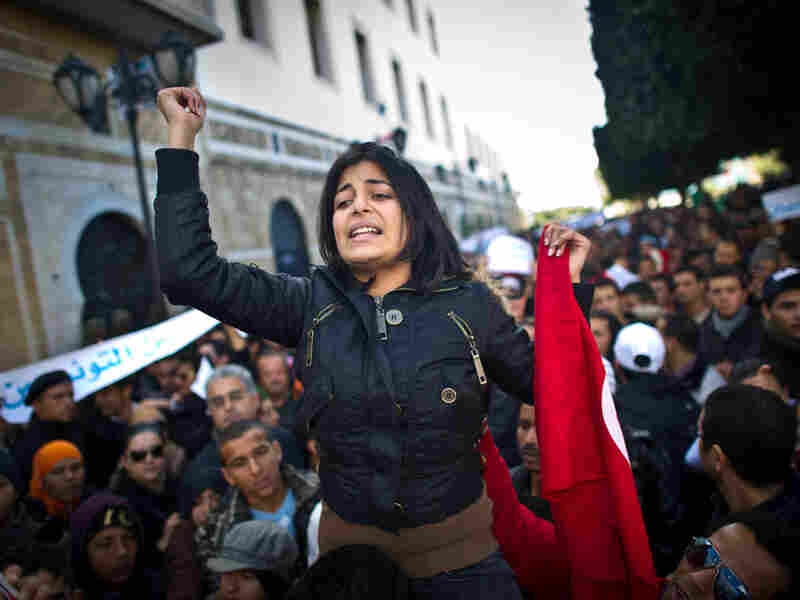 A woman participates in a demonstration in Tunis on January 22, 2011. Martin Bureau /AFP/Getty Images hide caption

Women in Tunisia are unique in the Arab world for enjoying near equality with men. And they are anxious to maintain their status.

In Tunis, old ladies, young girls and women in black judges robes marched down the streets demanding that the dictator leave.

Hardly anyone wears the Muslim headscarf in the capital, and women seem to be everywhere, taking part in everything, alongside men.

Irgui Najet, 36, argues with a group of men on the sidewalk, defending the country's provisional leaders. She does more than hold her own. The men are so impressed with her knowledge, they tell her she should run for president. No one seems to think being a woman is a hindrance.

Najet, a criminal lawyer, explains the difference between Tunisian women and their sisters in the rest of the Arab world.

"We feel more free and more civilized than other Arab women," she says. "And especially since our revolution, we pity the women in neighboring countries. Look at Libya where they have to wear headscarves and can't even talk with men. This is a catastrophe."

Soon Najet meets up with her lawyer colleagues and everyone is absorbed in heady conversation about Tunisia's revolution. One-third of the country's judges are said to be female.

Just look at how Tunisian women stood side-by-side with Tunisian men. They came out to the streets to protest in headscarves. They came out in miniskirts. It doesn't matter. They were there.

Many Tunisian women now say they are concerned about the potential return of Islamist parties banned under Ben Ali. But Asma Belkassem, a 31-year-old lawyer, says she's not scared.

"What is sure is that we women have rights in Tunisia," she says. "And no one can take them away now. Not the Islamists or anybody else."

Tunisian women credit a 1956 civil rights code for their many freedoms and equality, as well as an excellent education system that is open to all.

They also thank former President Habib Bourguiba, their founding father who led the independence struggle from France and wanted women to play a full role in Tunisian society. No one gives an ounce of credit to Ben Ali.

Khadija Cherif, a long-time feminist activist, says Ben Ali pretended to support women's rights to please the West. The return of Islamist parties to Tunisian politics could pose a threat, she says, but women will remain vigilant. 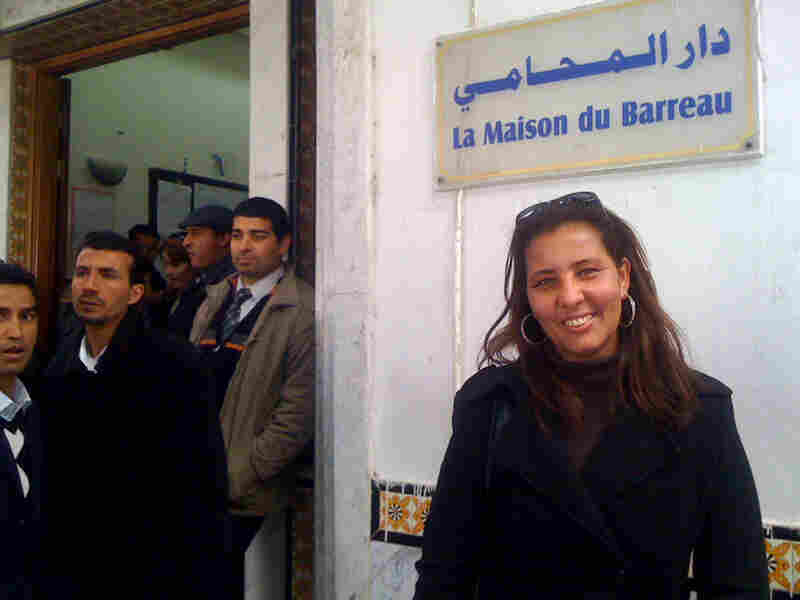 Irgui Najet stands in front of the Bar Association. Women in Tunisia are unique in the Arab world for enjoying near equality with men. And they are anxious to maintain their status. Eleanor Beardsley/NPR hide caption

"The force of the Tunisian feminist movement is that we've never separated it from the fight for democracy and a secular society," she says. "We will continue our combat, which is to make sure that religion remains completely separate from politics."

Back at the courthouse, lawyer Bilel Larbi has joined his female colleagues. He says the best way to measure relations between the sexes in Tunisia is to look at the demonstrations over the last month.

"Just look at how Tunisian women stood side-by-side with Tunisian men," he says. "They came out to the streets to protest in headscarves. They came out in miniskirts. It doesn't matter. They were there."

Larbi says after rising up to overthrow the dictator together, Tunisian men aren't about to let anyone take away the freedoms of Tunisian women.