Accessibility links
Censors and Sensibility: RIP, Comics Code Authority Seal Of Approval, 1954 - 2011 In 1954, comic book publishers created the Comics Code to stave off government censorship. Last week, it was finally abandoned. Our comics blogger takes a look at the long, strange history of the mysterious set of rules behind the comics you grew up with. 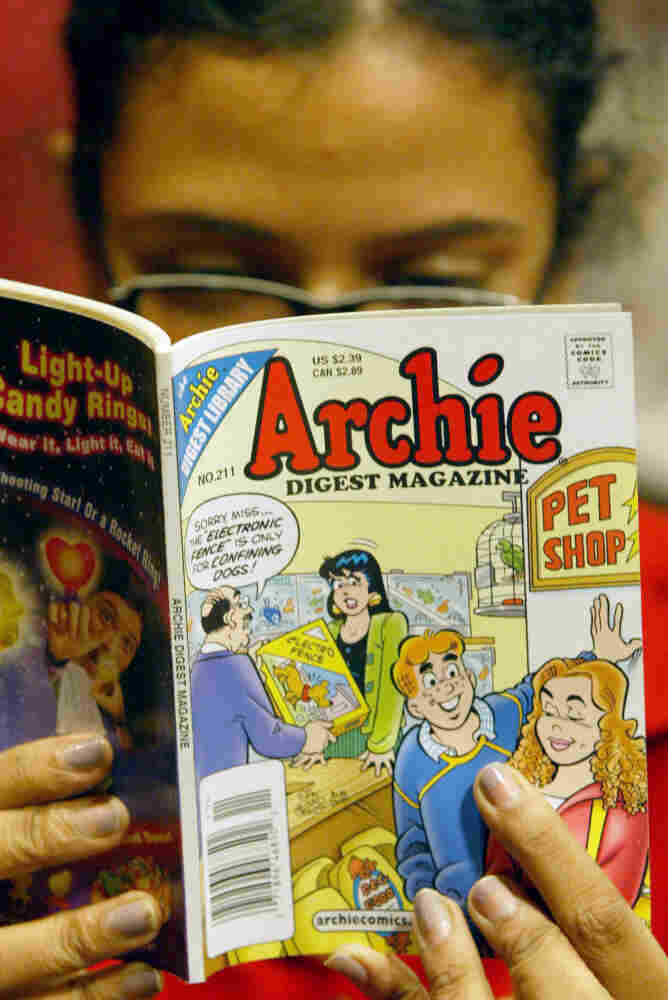 An enthusiast reads an Archie comic at Oxford Book Shop in Calcutta, India, Monday, May 7, 2007. Do you see, up in the corner? The upper right corner of the cover? See that tiny thing you can barely make out? That's the Comics Code Seal Of Approval. Bikas Das/Associated Press hide caption 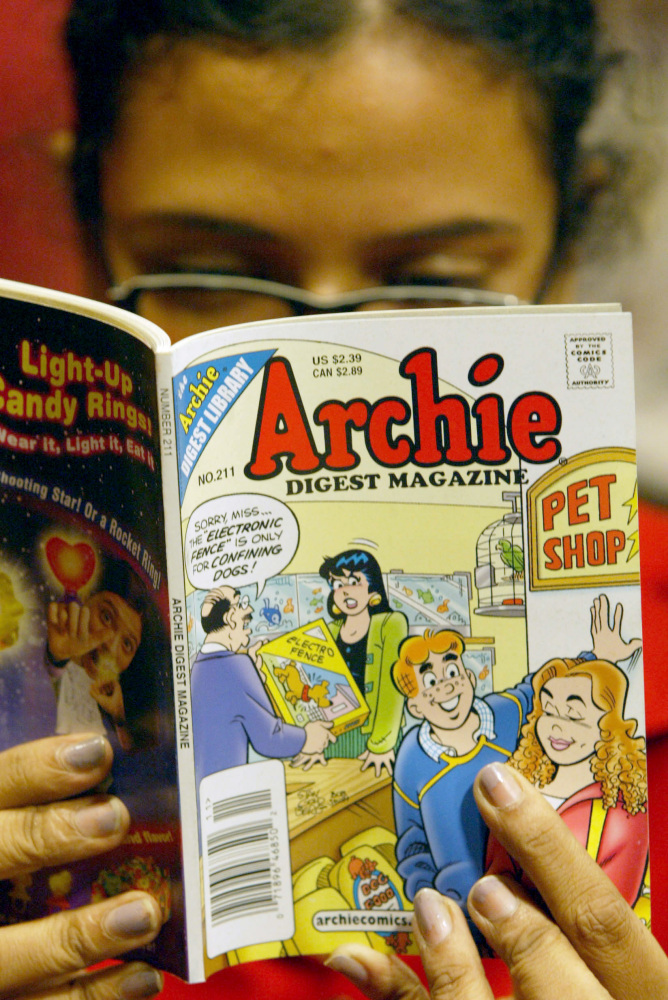 An enthusiast reads an Archie comic at Oxford Book Shop in Calcutta, India, Monday, May 7, 2007. Do you see, up in the corner? The upper right corner of the cover? See that tiny thing you can barely make out? That's the Comics Code Seal Of Approval.

I come to bury the Comics Magazine Association of America, not to praise it.

The evil that mysterious self-censoring publishing associations do lives after them, the good is oft interred with their bones — so let it be with the CCMA.

So are you, uh ... You gonna keep that up? Through this whole thing? 'Cause I've got some Friend Requests to get to.

Last Friday, Archie Comics Publications, Inc. announced that it would no longer feature the Comics Code Authority's Seal of Approval on the covers of its comics. Just a day before that, DC Comics made a similar announcement.

So much for The Comics Magazine Association of America, which for over 50 years served as the comics industry's self-regulating (read: self-censoring) arm.

It's the end of an era that began back in 1954, when various comics publishers came together and created the CCMA in an attempt to preempt a government crackdown on their product.

A government crackdown? Come on.

Well, first, you have to understand: Comics were everywhere, at that time. They were sold in five and dimes, department stores, grocery stores, train stations, bookstores, everywhere. And American kids bought them by the tens of millions; they reached more homes than Howdy Doody.

Yeah, never mind. The point is, when it came to comic books, two conditions coexisted: 1. They were omnipresent and 2. Kids loved them. This, in the eyes of adults, made them Highly! Suspect!

Anyway: Parents groups protested, as they do. Scientists and academics ran over each other as they stampeded for the nearest soapbox to intone dire threats about Our Childrens' Future, as they do. In 1954, the guy who ran fastest and intoned loudest was psychiatrist Dr. Fredric Wertham.

"Won't somebody PLEASE think of the children?" Heh. Right?

Even Helen Lovejoy at her most Helenic had nothin' on Wertham.

He was by all accounts sincerely motivated by a desire to keep kids from psychological harm, and he did a lot of good in his life. But in comics circles, he will be forever remembered for his 1954 book Seduction of the Innocent, which placed the blame for the nation's juvenile delinquency squarely on funnybooks.

One can quibble with his reasoning, here: In his book, Wertham interviewed juvenile delinquents and asked them if they read comic books; most said yes.

But, remember: Most every kid read comics back then, whether or not they smoked Lucky Strikes behind the boys' gym. It'd be like asking everyone who has experienced suicidal thoughts if they had ever watched The Phantom Menace.

To be fair, the guy had a point about the violence. The heyday of the superhero was fading by then, and in their place came Western comics, war comics, and — especially — crime and horror comics. Which could be gruesome, in a gleefully unapologetic way.

Yes, the Code. As I said, by 1954 things were coming to a head. There were congressional hearings on the scourge of juvenile delinquency and comics. Church groups were holding mass comic book burnings. Consumer groups urged parents to complain to their local grocers about the comics they stocked, in a bid to make those grocers conclude that the lousy pennies' worth of profit they were making off of a comic wasn't worth the headache.

So the publishers decided they'd rather self-police their wares than let the gummint tell them what was what. They created a Comics Code (technically, they added much stricter regulations to a loose set of guidelines they'd created a few years earlier).

The new code was to comics what the Hays Code was to movies — an attempt to ensure that the content was wholesome and morally upright. Crime would not pay, and iniquity and turpitude would be punished.

For years after that, publishers would submit their comics to the CCMA prior to publication and the CCMA would make recommendations for changes. The CCMA had no legal authority, but it could decide not to put its seal of approval on a book — and many distributors and stores would not stock a comic book without that seal, for fear of the Helen Lovejoys and Fred Werthams of the world.

Did that shut Wertham up?

No, not particularly. He saw the Code as a cynical half-measure; he wanted comic books gone. Turns out it wasn't just the subject matter he objected to — he maintained that the form itself was harmful to Our Nation's Youth.

He asserted that the line-breaks necessary to fit comic-book dialogue into word balloons would wreak havoc on a child's ability to read long, unbroken passages of prose. Likewise, he didn't like the fact that comic books used only capital letters.

"WON'T SOMEBODY PLEASE THINK OF THE CHILDREN?"

Exactly. And remember, he was an academic. "Publish or perish," and all that. So he kept publishing, and kept not-perishing.

When "perish" won out.

But the Code kept going strong?

Well, it kept going, anyway. A publisher that produced comics expressly for kids — Dell, which published Disney comics in the 1950s — didn't particularly need to bother with the CCMA, as it had its own internal editorial guidelines, which were plenty strict. The folks at Classics Illustrated never followed the Code guidelines, as they were adapting (non-Code-approved) classic fiction.

And of course the underground comics movement of the 60s and 70s rejected everything the CCMA stood for; that was practically its organizing principle.

What about the Big Two?

Marvel and DC were dealing with a comics audience that was growing steadily older. Their writers were now looking to tell grittier stories in the pursuit of "relevance" — and starting chafing under the (self-imposed) yoke. Technically, for example, the Code didn't look kindly on any depiction of drug use, even when said drug use led to a (dun dun DUN) tragic end.

This eventually prompted the CCMA to start making some periodic revisions to the code, but the group, and the code, never had much of a public face — and the one that it did have was inscrutable. Which is notably odd, because the CCMA was ostensibly a comics trade organization with a mission of outreach, such as programs to get comics into more outlets.

A generation of parents came of age only dimly aware of what the Comics Code Seal on the cover of their kids' comics was, much less what it stood for.

And still the bulk of the comic book audience grew older and began to abandon the grocery store spinner-rack for the comic book shop. Eventually, publishers began creating separate lines of comics intended for mature audiences, and these lines didn't bear the seal. In 2001, Marvel decided it could create an MPAA-like ratings system — and stop paying for the privilege of having its comics reviewed by a panel of scolds.

Now? With DC and Archie — the last two publishers out the door — saying a big "Thanks, but no thanks, we're good?" The era of the Code is at an end.

Which is just as it should be.

The code was an absurd relic of the Dragnet era, when no episode could end until Jack Webb's Sgt. Joe Friday upbraided the ne'er-do-wells he arrested in a condescending monotone — and supplied viewers at home with a reassuring weekly dose of normative morality.

For years, the Code has been an appendix, a vestigial tail, a holdover from a time when comics were written for children.

And as you may have heard, because it's been in all the papers (EVERY LAST FRIGGIN' ONE OF THEM): Comics? Aren't just for kids anymore.

NOTE: Gigantic thanks to blogger, comics historian and Comics Buyer's Guide Senior Editor Maggie Thompson for sharing her (manifold! prodigious!) insights on the history of the Code. Any mistakes you find above are mine, any bits you like are hers. As Pop Culture Happy Hour listeners know, Maggie is also NPR Music Editor Stephen Thompson's mom, and thus is, on top of everything else, one very brave and patient woman.