Accessibility links
The Weekly Standard: Why Egypt Is Really Protesting This week, Egyptians took to the streets in several cities to protest the rule of President Hosni Mubarak, who has governed the country for three decades. But Lee Smith of The Weekly Standard argues that the demonstrations aren't so much against the rule of Mubarak as they are about the succession of his son, Gamal.

The Weekly Standard: Why Egypt Is Really Protesting

The Weekly Standard: Why Egypt Is Really Protesting 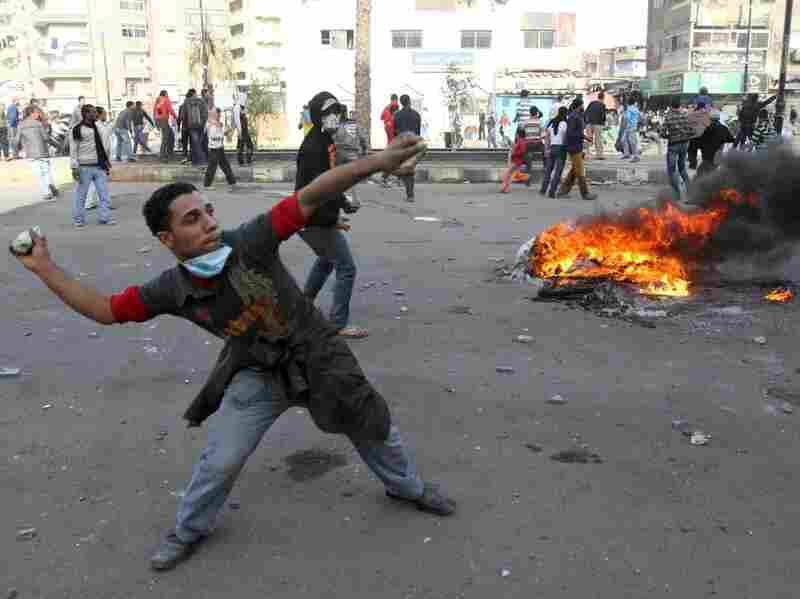 Egyptian demonstrators throw stones at Egyptian police during demonstration in Suez demanding the ouster of President Hosni Mubarak. Mubarak has been ruling the country for nearly three decades, and is expected to pass the presidency to his son, Gamal. Khaled Desouki /AFP/Getty Images hide caption 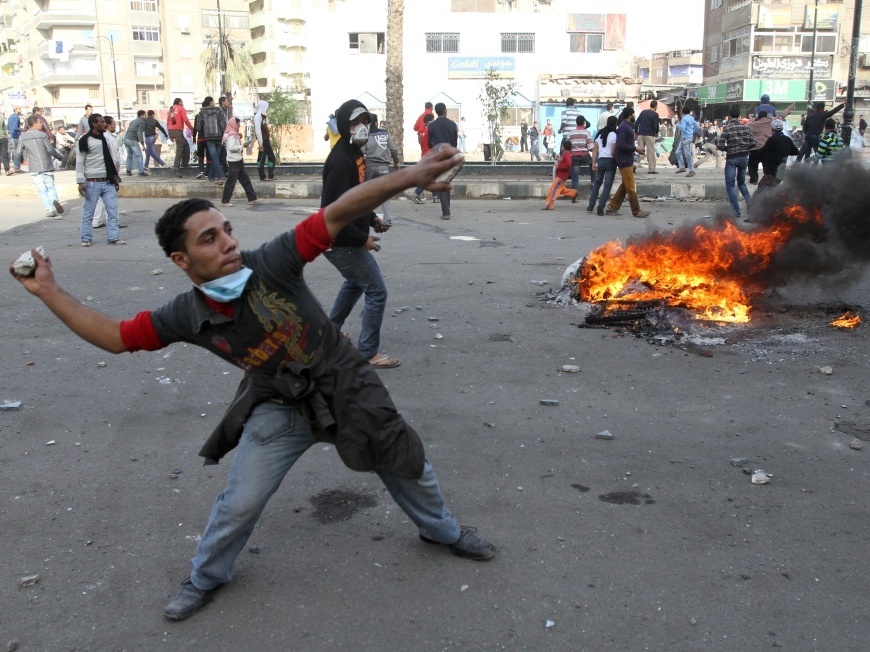 Egyptian demonstrators throw stones at Egyptian police during demonstration in Suez demanding the ouster of President Hosni Mubarak. Mubarak has been ruling the country for nearly three decades, and is expected to pass the presidency to his son, Gamal.

Lee Smith is a senior editor at The Weekly Standard. He is the author of The Strong Horse: Power, Politics, and the Clash of Arab Civilizations.

Egyptian sources are dismissing reports that Gamal Mubarak and his family have left Cairo for London. If those earlier accounts were not outright propaganda, they seem to have been based more on wishful thinking than reality. The Mubarak regime is not as brittle as that of Tunisia's erstwhile president-for-life, Zine El Abidine Ben Ali, and right now seems to be in little danger of falling. However, it does seem to be the case that the protests erupting throughout Egypt's major cities are less about President Hosni Mubarak's 29-year-long reign than they are about the succession of the man who seems to be his chosen heir, his 47-year-old son Gamal.

The test of an Arab dictator is not the virtue of his rule, but the length of it, and to be followed by his progeny extends his name further into the future. In this regard Arab presidents are no different from Arab monarchs — Bashar al-Assad inherited the presidential palace from his father Hafez; Qaddafi's son Saif al-Islam will rule Libya once his father is gone; and Saddam's boys would have shared his father's spoils until one had figured out how to murder the other. Hosni Mubarak would seem to be an exception insofar as it is rumored that it is his wife Suzanne who most wants Gamal to be the next ruler of Egypt. If the president himself is less enthusiastic that is perhaps because he understands that the nature of the regime and the career of his son are not an ideal fit.

To the IMF and the World Bank, a few European capitals, and even certain sectors of Washington, Gamal looks like the future of the Arab world: a Western-educated, pro-business technocrat who worked as a banker in London and has surrounded himself with a cadre of young businessmen responsible for liberal reforms that have grown the Egyptian economy for more than half a decade. Never mind that little of this has trickled down to the Egyptian masses, 60 percent of which live on less than $2 a day. The real question is how much of this money will it take to ensure the loyalty of the military and security officials who are responsible for the day-to-day operations, and security, of the Egyptian government.

It seems that Ben Ali lost Tunisia because his wife's family had a hand in every business in the country, including those that the military was accustomed to profiting from. Thus last week the Tunisian army made the only logical decision when it chose not to fire on civilians: perhaps they would shed the blood of innocents to protect their own interests, but certainly not to secure the stake of precisely those people who are taking money out of their wallets. What we are seeing in the streets of Egypt is perhaps something similar. Cairo's military and security apparatus is using the demonstrations as leverage in order to improve its position; the men who run Egypt are deciding whether or not they want Gamal to be the next president, and if so what it will cost him.

If Gamal goes, the likely successor will be intelligence chief Omar Suleiman, the man rumored to be the young Mubarak's chief rival, or alternately, the future power behind Gamal's throne. Gamal's problem is that he has no military experience whatsoever, a liability for the prospective head of a regime whose coherence and internal legitimacy is based on nothing other than its symbiotic relationship with the military. Nonetheless, even if Gamal really were to leave for London and even if his father stepped down, or just decided not to run for president later this year, the Mubarak regime would not fall because in reality there is no Mubarak regime as such. Rather, it is a Free Officers regime, one that has lasted almost half a century, or dating back to the 1952 coup that deposed King Farouk. During that period, the regime has survived 3 wars with Israel and another in Yemen. And that's not all: almost as bad as Gamal abdel Nasser's public humiliation after losing the six-day war in 1967 was the regional isolation imposed on Cairo after Anwar Sadat's peace treaty with Jerusalem. But the regime survived both, as well as Sadat's assassination and a subsequent civil war throughout the 1980s and 1990s with armed Islamists, many of whom went on to form the leadership of al Qaeda. A regime that has been tested under that kind of fire is unlikely to fold in the face of 50,000 protesters throwing rocks.

For all the excitement surrounding the demonstrations, it's worth remembering that the nominally docile Egyptian masses take to the streets with some regularity, especially when it involves food prices and living wages. More to the point, it is an unfortunate fact of modern Egyptian history that its people are often susceptible to ideological politics. For instance, Nasser led the country to disaster and yet compared to Sadat the peacemaker or Mubarak the stolid pharaoh who has kept the country stable, if static, it is Nasser who owns the affections of the Egyptian masses. That is to say, we don't know exactly what the protestors want. There are those who hate the regime because it jails and tortures bloggers and those who hate it because it won't make war on Israel. No doubt some of the young are just fed up they have never known another Egyptian ruler in their lifetimes. Some of the youth are democrats and others are decidedly not.

It is not always a good thing when people go to the streets; indeed the history of revolutionary action shows that people go to the streets to shed blood more often than they do to demand democratic reforms. Perhaps it is an appetite for activist politics that explains why so many Western observers are now captured by the moment. Otherwise, it would be hard to explain why it seems as if no one had learned from the failures of the Bush administration's freedom agenda — namely the Palestinian Authority elections that empowered Hamas — or could remember its successes. The Iraqis and Lebanese went to the streets, too, and our allies there are under pressure and ignored not only by the Obama administration, but also by a press corps and intelligentsia that mostly seems just fascinated by the spectacle of Arabs throwing themselves against a wall, regardless of the outcome.