Accessibility links
Ant Farm: The Big Chill And Tunnels Of Love Ant farm co-creator Milton Levine died this month, leaving behind a legacy of bug-loving kids. Laurel Dalrymple brought home a habitat and learned, among other things, not to put it in the freezer.

Ant Farm: The Big Chill And Tunnels Of Love

Ant Farm: The Big Chill And Tunnels Of Love 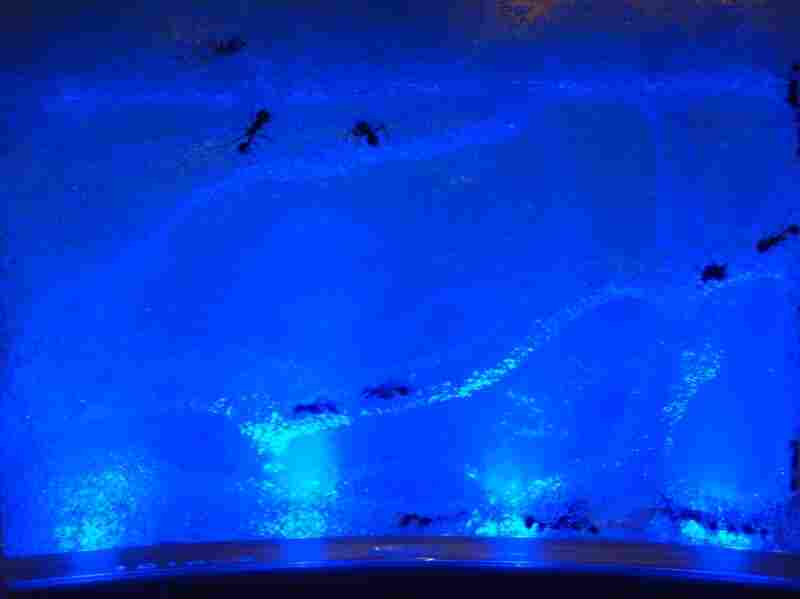 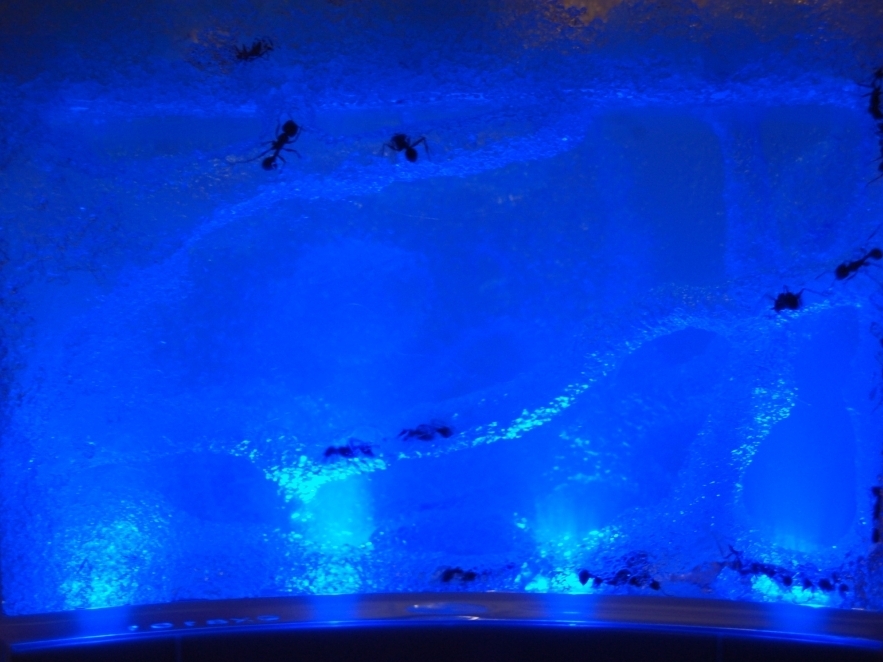 The ants build tunnels through their space-age habitat.

Laurel Dalrymple is a home page editor at NPR.org

Despite the Xbox 360s, lifelike squawking hamsters and remote-controlled flying fairies now on the market, my 8-year-old daughter asked for just one thing last Christmas: an ant farm.

I found that bizarre, but cost-effective. So after some shopping around, I decided on the low-maintenance AntWorks Illuminated Space Age Ant Habitat, which could very well be the Xbox 360 version of ant farms. Blue LEDs give it a galactic glow, and a NASA-tested gel comes with all of the nutrients needed to sustain an ant colony.

I then ordered online a vial of 50 harvester ants, which seemed the perfect size both for the habitat and for viewing, and had them set to be delivered on Dec. 26, so we could put them immediately into the habitat. Unfortunately, the ants arrived three days early, stuffed in a tiny vial and looking quite irritated about it.

This aura of ant desperation triggered an immediate hunt under the tree for the wrapped ant farm. After half-opening various presents and basically ruining any Christmas morning surprises, we finally found it and presented it to my daughter. "An ant farm?" she exclaimed, as if this was the first she'd ever heard of it.

Within a few minutes, the ant farm was in full working order, illuminated and bustling with 50 healthy ants who were walking gingerly on the gel like they'd just landed on the moon. Over the next few days, we watched, fascinated, as they began to tunnel and work together in shifts to connect their passageways into an elaborate interstate system. 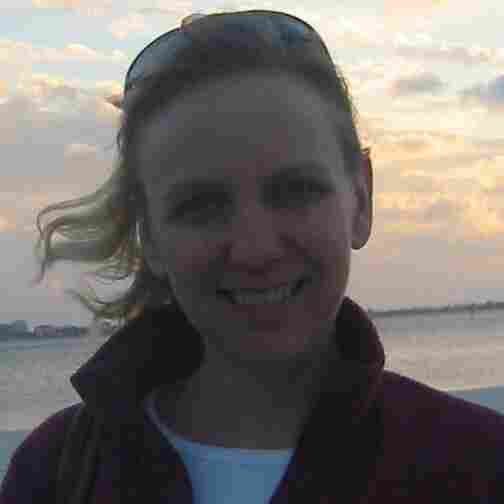 Laurel Dalrymple lives in Virginia with her husband, two kids, two dogs and 18 ants. They are still working to get their family off the ants' most-wanted list. Courtesy of Laurel Dalrymple hide caption 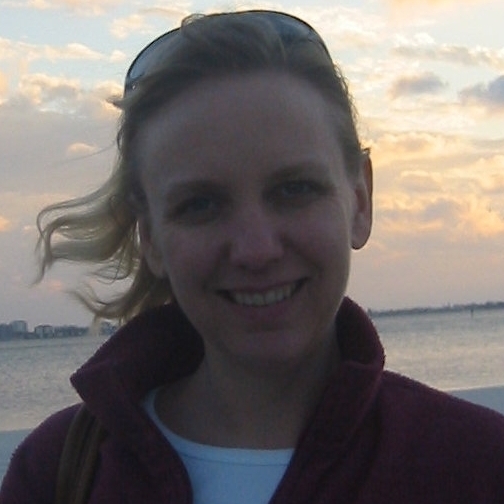 Laurel Dalrymple lives in Virginia with her husband, two kids, two dogs and 18 ants. They are still working to get their family off the ants' most-wanted list.

Then, one of the ants died. This sent the colony into a tizzy. Some of the ants wanted to plant the body at the bottom of a tunnel, while other ants wanted to store the body on the surface. We watched as one team of ants moved the body up and a rival team pushed it back down. For hours, they were as gridlocked as the federal government. Eventually the tunnelers won, and the carcass was stored at the top of the farm in the corner. All body parts and carcasses henceforth were collected, piled in the morgue and smothered with space gel. My kids and I couldn't get enough of this.

The directions said to remove all carcasses immediately to help stop the spread of disease in the colony. I read online that the ants bite and to refrigerate them for a few minutes to make them slow to react when opening the farm. We were having a busy day, and I set my husband to the task.

The next morning, I awoke in panic and ran to the top of the stairs, peering down at the empty shelf where the ant farm had resided. I heard my husband in the shower and ran into the bathroom.

Read About Laurel's Adventures Playing Truth Or Dare As A Teenager

Plucked from the freezer, the colony looked like an eerie little insect version of Pompeii.

My husband sighed and headed downstairs with the ant farm to dispose of it.

It then dawned on me that if my daughter happened to pop up and find her half-naked father on the stairs holding her frozen ant farm, it would give a whole new definition to the phrase "scar for life." Our $25 gift would quickly turn into $25,000 in therapy.

Fortunately, that did not happen. But we did have to explain to our kids that we killed their ants. My daughter said nothing, just marched into the den and drew a sign with a picture of an ant and a crossed-out freezer: "Ants go in the refrigerator," it said in bright red marker. She slapped the sign on the kitchen wall.

We'd had so much fun with the first batch before we slaughtered them that I ordered another ant farm and set of ants. There should probably be a law against this.

It then dawned on me that if my daughter happened to pop up and find her half-naked father on the stairs holding her frozen ant farm, it would give a whole new definition to the phrase 'scar for life.'

This time, the ants arrived before the habitat, so we transferred them to a Mason jar with holes in the lid and a little sugar water and celery. Even though we had found no scientific evidence indicating that this was a bad plan, they proceeded to die at the rate of about five per day. By the time the ant farm arrived, only half of the ants were left. Trying to extricate live biting ants from the Mason jar mass grave turned out to be quite an ordeal, with more than a few casualties, and my daughter ended up chasing escapees around the kitchen with her bug vac.

Out of 50 ants, only 18 live ones made it to the farm, and they were clearly traumatized. They wandered around aimlessly for days with no energy or social interaction or interest in digging. Two more died, and another morgue was formed in the corner. Then, miraculously, they started huddling in groups, communicating with their little feelers, forming little ant caucuses. Eventually, one of the groups began to dig. They grabbed tiny pieces of gel in their mandibles, painstakingly moving each morsel to the top. Within hours, they'd created a nest at the bottom of the farm, where the weaker ants relocated. Some worked while others rested. It fascinated us that in spite of their troubles — displaced, sold on the market, badly treated — they found a way to work together, compensate for each other and keep on going. It was a testament to both insect and human spirit: We are kindred souls!

Two weeks later, they are still thriving, this small band of ragtag survivors. Inspired, I bought another ant farm for a friend's daughter. Her ants have tunneled but are now spring-loaded at the top like they are hatching a prison break. We've discovered that each colony, while similar, seems to have its own personality, like Southern ants and Northern ants. 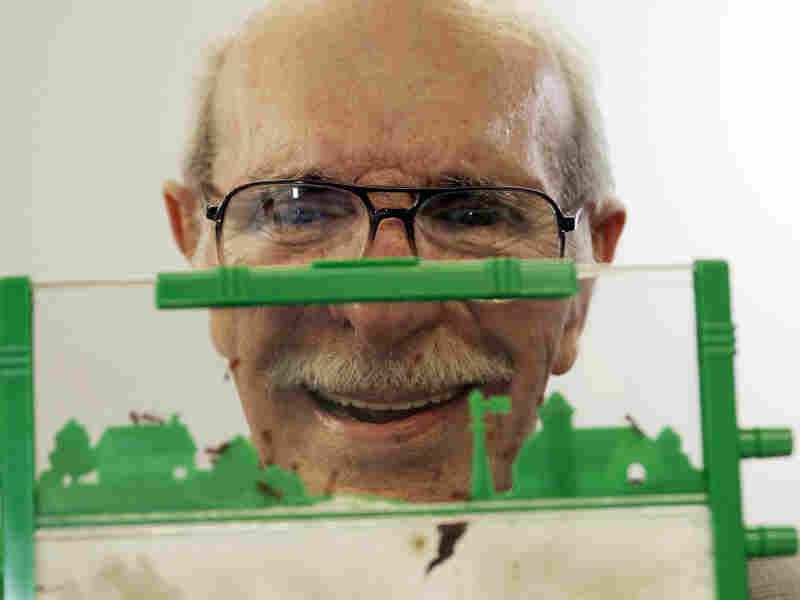 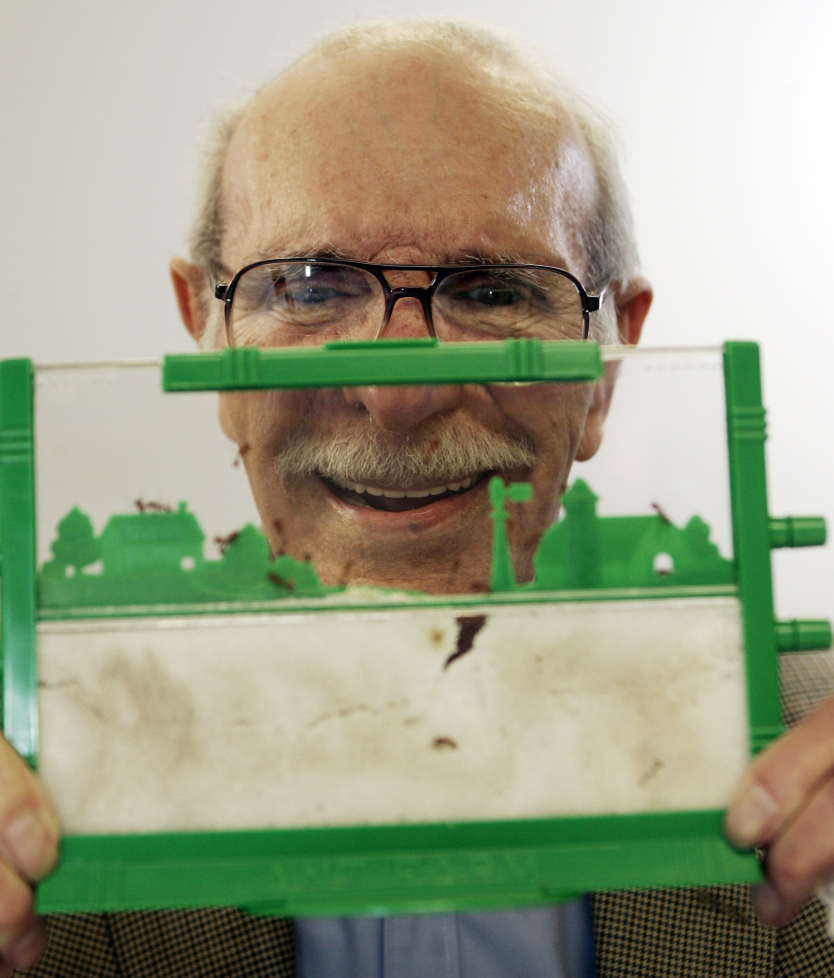 I'd have to admit that of all the Christmas presents this year, the ant farm has been the best. There are many times when my daughter, son and I will sit in front of it just staring. As for my husband, the ant killer, he's been given a restraining order, but occasionally, after the kids are asleep, I'll catch him gazing at the farm. It's just too hard not to watch these resourceful little creatures work together to build their world.

When I told my kids that Milton Levine, co-inventor of the ant farm, died this month, their reaction was priceless.

"He died?" my son said, incredulously. "On your birthday?" As if that were somehow sacrilege.

"Will they keep making ant farms?" asked my daughter, clearly worried that her father might break his restraining order.

They didn't even show that kind of emotion when their Wii console broke.

So thank you, Mr. Levine. Your simple inspiration in 1956 still lives on in our home. Just not in our freezer.