Accessibility links
Iraqi Women Wed To Insurgents Find Little Hope In a country with millions of orphans and widows, officials say it's tough to make women who are seen as criminals a priority, which means they're basically ignored by everyone. 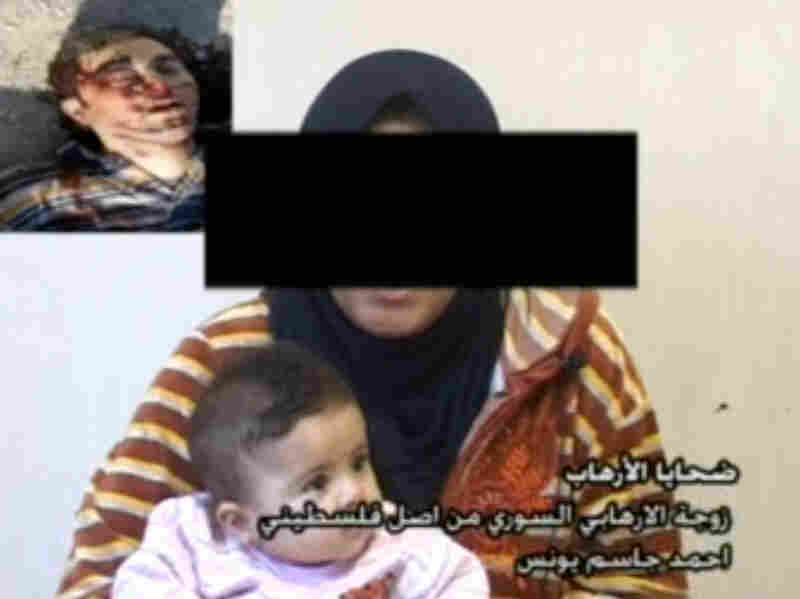 The Iraqi government recently launched an anti-al-Qaida media campaign that urges women not to marry insurgents. Seen here is a screen grab from a government video of one woman who married an insurgent. Her daughter, also pictured, is the child of a Palestinian-Syrian al-Qaida fighter who was killed by Iraqi forces. He is seen, dead, in the upper left of the screen. Iraq Ministry of Defense hide caption

A spate of attacks around Iraq last week showed that the Sunni insurgency is still a force to be reckoned with.

The movement started with Saddam loyalists and militants from neighboring countries whose aim was to fight Americans. Then they turned on their Shiite countrymen.

Now they seek to destabilize what they see as a U.S.-backed, Shiite-led government.

Caught up in all of this are the wives: the women who provide the insurgents with food, shelter, children — and sometimes help. Now that militants have been caught or killed, it's the women who are left behind.

At first, the young mother is leery. Twenty-one years old and stubborn, Um Salah comes from a traditional tribal village in Diyala province, a former al-Qaida stronghold about an hour north of Baghdad. She refuses to provide her full name.

When we ask about her husband, she has only praise.

"He was a good guy," she says. "No one would criticize him for anything."

But we know different. We know Um Salah's husband was a high-ranking member of the Islamic State of Iraq, the local branch of al-Qaida.

We also know he was accused of helping kill Um Salah's father, and that he was handed over to authorities by her own brother.

Eventually, Um Salah admits that her husband was part of what she calls the resistance.

She shows us a record of her marriage. It was performed by a religious cleric. But the record is only a stained piece of notebook paper, with no date and no signature.

What this means is that Um Salah is not legally married — and that her 2 1/2-year-old boy, Salah, is not registered with the government. No registration means no food-ration card, no right to visit the hospital, no school.

Um Salah says that with her husband now in jail and accused of being a terrorist, she has no money and no hope. While she talks, the boy hangs on her shoulder. She starts to cry, and her mother interrupts: "Sometimes when she is so fed up with her situation, she would just pray ... 'God, take my life, OK, let me die, with my son, now,' " her mother says.

Aid groups say there are more than a hundred women like Um Salah in Diyala province alone.

The program, broadcast on state TV, featured two women who said they were forced to marry foreign fighters. One woman says her uncle arranged a marriage with a Palestinian-born militant from Syria. The man was was later killed in a raid by Iraqi troops.

About 20 women who once were married to militants have recently been detained. Ministry of Defense spokesman Mohammad al Askari says he finds it hard to believe that any of them are totally innocent.

"If you live with someone ... you know his reactions, his mentality, his ideology, the way he reacts. So you should know something about him," he says.

Um Mohammad, who declined to give her full name for fear of bringing shame to her family, agrees. She is also from Diyala province. And she was also married to an insurgent.

She says the people in her village willingly joined the insurgency because fighters promised to rid Iraq of the American invaders.

"Those guys had a very sweet talk," she says. "They were all pious people who prayed and fasted."

Um Mohammad says the women naturally helped these men, whom they saw as holy.

"They would hide men," she says. "When the men wanted to move, they would disguise them in women's clothes and help them. If someone would come and ask, 'Where is he?' they would say, 'Oh, we don't know,' while he is hiding in her house."

What the government is not doing is providing any kind of social services to the women like Um Mohammad who have been left behind, whether they're guilty of collaborating with the insurgency or not.

In a country with millions of orphans and widows, officials say it's tough to make women who are seen as criminals a priority — which means they're basically ignored by everyone, says Hana Adwar, who heads a local women's rights group.

"They are not recognized in respecting their dignity. I mean that they miss housing, they miss health protections, they miss education," Adwar says.

The only way out for most of these women is to marry again, she adds.

Rawaa Ismael is from Anbar province, another former al-Qaida stronghold. One day, insurgents showed up at her house and forced her to marry one of them.

"We didn't have a bedroom — like a real bedroom. They just put me in a room and I was raped, in the real sense of the word," she says.

After that, Rawaa and her mother fled. They were considering going to a women's shelter, but they were afraid the militants would come after them.

Since then, they've been moving from house to house, relative to relative. Even their own people are ashamed of them.

Now Rawaa is staying with her sister, who is married. At least now, she says, there's a man in the house to take care of her.