Accessibility links
Bachmann Speech, Live On CNN, Creates A Buzz Minnesota Rep. Michele Bachmann didn't deliver the official Republican response to President Obama's State of the Union address. But it was her Tea Party-sponsored speech — and CNN's decision to air it live — that had the world of politics and media buzzing. 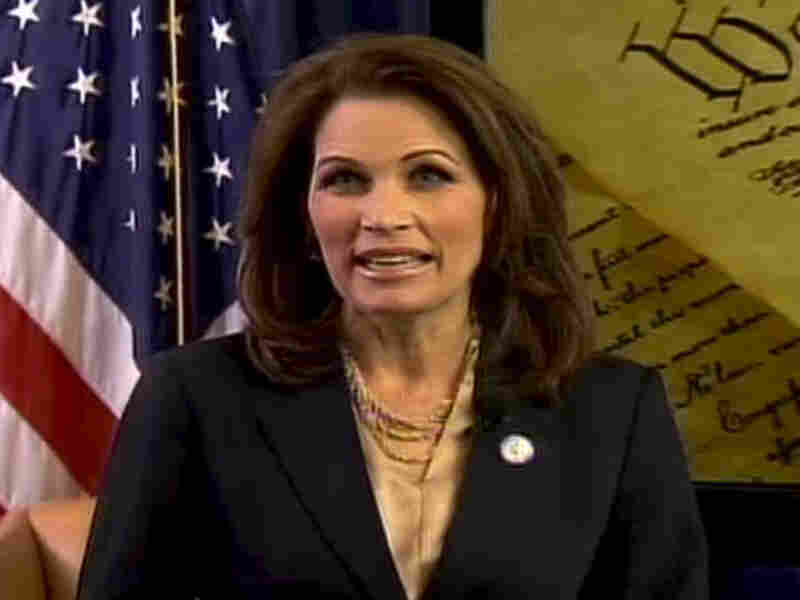 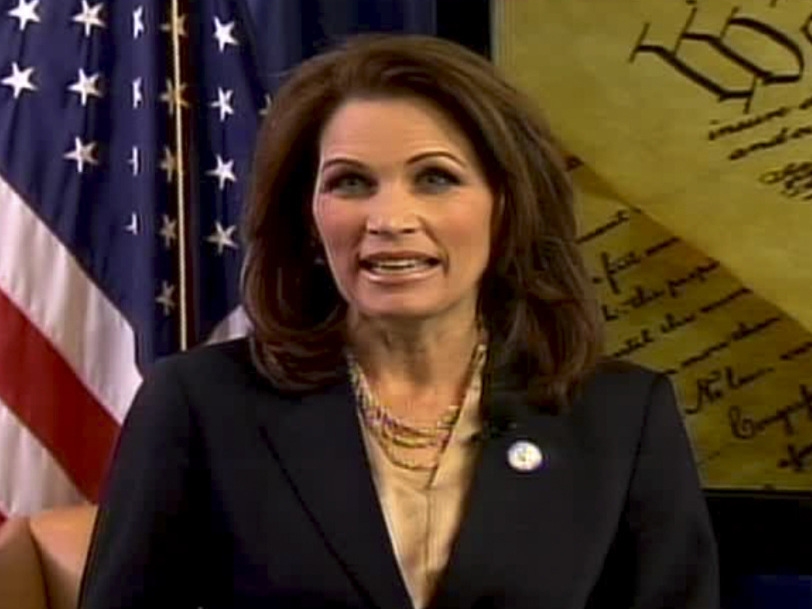 Minnesota Rep. Michele Bachmann didn't deliver the official Republican response to President Obama's State of the Union address, but it was her speech that had the world of politics and media buzzing Wednesday.

Bachmann's rebuttal message, hosted by the Tea Party Express, drew less attention for its substance than for CNN's decision to air it live.

Some media watchers criticized CNN for being the only network to do that, and they raised questions about a potential conflict of interest: CNN is partnering with the Tea Party Express to produce a Republican presidential candidates' debate this fall.

"I can't figure how you can partner with a political action committee and claim to be neutral," says Kelly McBride, who teaches media ethics at the Poynter Institute, a journalism training center.

In an interview, Sam Feist, CNN's political director and vice president of Washington-based programming, said any suggestion that CNN couldn't cover the debate impartially is "ludicrous. It reveals a lack of understanding by the people bringing this up. Almost all debates are partnerships with other organizations. In every case, we maintain editorial control."

Bachmann's address originally was scheduled to be streamed only on the Tea Party Express website. But CNN announced Monday that it would carry the speech in addition to the official Republican response, delivered by Rep. Paul Ryan of Wisconsin. The decision drew rebukes from Republicans, liberals and others in Washington who suggested that Bachmann's political stature didn't warrant such a platform.

The furor prompted Feist to defend the decision on Tuesday before the speech.

"The Tea Party has become a major force in American politics and within the Republican Party," Feist said. "Hearing the Tea Party's perspective on the State of the Union is something we believe CNN's viewers will be interested in."

Fox News broadcast her speech on a delay. NBC anchor Brian Williams interviewed her live after she delivered her response. MSNBC aired clips. NPR broadcast Ryan's response live, but did not air Bachmann's.

Since founding the Tea Party caucus in the House last year, Bachmann has used her strong support within the movement to raise her national profile. Her recent visit to Iowa, an important early presidential caucus state, fueled speculation that she's considering a presidential bid.

But Bachmann's style — and history of making inflammatory remarks — has kept her from rising within the House leadership. Despite her aggressive lobbying, she was passed over for a House leadership post and key committee appointments in the new Congress.

In a subtle snub of Bachmann on Wednesday, House Speaker John Boehner (R-OH) told reporters that he didn't watch her speech.

More From The Morning After

Democrats delighted in her address. Many of them say it reflects an ongoing power struggle between Tea Party activists and GOP standard bearers over the direction of the party.

"It was a very nice dream for the Democrats because it shows disunity within the Republican Party," Democratic strategist Peter Fenn said Wednesday.

In their reactions to the speech, many Republicans sought to downplay any suggestion that the congresswoman is stoking an intraparty squabble.

"A lot of people are reading too much into this, though because it's on the national stage I can understand some peoples' reservation," Ford O'Connell, a Republican strategist and chairman of the conservative CivicForumPac, said Wednesday. "The Tea Party is saying, 'We are beyond the traditional two parties.' "

A number of media critics praised CNN for airing the speech because Bachmann represents an increasingly influential group in Congress that has distinguished itself as an independent voice.

"I thought they made a smart decision. I was a little surprised that the other networks didn't do that. The tension in the Republican Party between the movement we call the Tea Party and the establishment party is a major story," said Jay Rosen, a media critic who writes the PressThink blog. "It probably promised to be good television … and it's better than listening to pundits talk about positioning."

In the cable television news realm, CNN has positioned itself as the centrist alternative to Fox News, which provides the most welcoming platform for conservatives, and the liberal-leaning MSNBC. But the network's decision to broadcast the Bachmann speech marks its latest effort to aggressively increase its coverage of the Tea Party movement.

Poynter's McBride said CNN made a "business decision. I have not talked to anyone at CNN about this, but when I see this decision I think this is a strategic play for Fox's audience."

CNN And The Tea Party Express

Some political strategists and media critics believe CNN helped legitimize what had been a nascent but disorganized assortment of local movements. Or, as Slate.com blogger Dave Weigel put it: "CNN has a longstanding romance with the Tea Party Express, the PAC that's putting on the Bachmann speech."

Weigel was referring to the Tea Party group's political action committee, which will partner with CNN to host a Republican presidential candidates' debate in September. The arrangement has left McBride and others saying CNN faces a conflict of interest by co-sponsoring an event with a political group that endorses and raises money for candidates whom CNN purports to cover without bias.

"It may gain credibility with a certain segment of the audience," McBride said of politically conservative viewers, "but it undermines CNN's independence with a broader audience."

On her show Tuesday night, MSNBC host Rachel Maddow lambasted CNN's broadcast of the Bachmann speech as a "remarkable act of journalistic intervention to elevate, in effect, a group with which they are co-sponsoring a presidential debate."

CNN host Piers Morgan, whose new show competes with Maddow's in the same time slot, fired back in a tweet, dismissing her criticism as "nonsense."