Accessibility links
Wanda Jackson: Getting The 'Party' Started The Queen of Rockabilly has just released a new album with Jack White of The White Stripes. In 2003, Jackson sat down with Terry Gross to explain why she switched from country to rock. 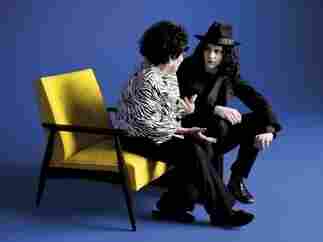 Wanda Jackson and The Party Ain't Over producer Jack White. Courtesy of the artist hide caption

This interview was originally broadcast on Nov. 3, 2003.

Wanda Jackson has been called the Queen of Rockabilly. But when she started singing in the 1950s, there weren't a whole lot of women rockers who could have been in line for the crown.

Jackson toured with Elvis Presley in the '50s. In fact, it was The King himself who encouraged her to try to cross over from country to rock 'n' roll. Her biggest rock hit was a song that Elvis recorded first, "Let's Have a Party."

In 2003, Jackson spoke to Terry Gross about her 2003 album Heart Troubles, which featured the singer performing with Elvis Costello, Dave Alvin and Rosie Flores.

"I'd heard of Elvis Costello, and I'm sure I'd heard some of his recordings," Jackson says. "But when I met him in the studio, I brought him my number-one box set. And when I said, 'I'd like for you to have this,' he took one look and he said, 'Oh, I already have that one, and I have the number-two box set, too.' So ... I figured he must really be a fan, and we just had no problem singing together."

Wanda Jackson: Her Party Ain't Over

"I was excited for him. And, of course, I was 17 and 18 years old, so I was a fan of his, as well as a friend. And I was thrilled to death at his success. He was very concerned and disturbed all the time about the things being said to him about his gyrations and things like that, and it really upset him; it hurt him. He was a very sensitive guy, I think. Somewhere along there, about '56, he was getting so popular, they had to stop him from autographing or meeting with his fans. And that really hurt him, because he loved his fans and wanted to shake their hands or what have you. But, you know, they were already pulling his coat off and tie and things when I was working with him, and it just got worse. And they said, 'Someone's going to get hurt if we don't stop you from this autographing.' So I remember that."

On Her Stage Attire

"I've never been able to wear a full skirt; haven't to this day. And the cowboy hats and those little clubby boots. And I just didn't like it. I didn't feel like that was me, because I was a big fan of Marilyn Monroe and Elizabeth Taylor, and I wanted to look like them. I used to go to all the musicals with paper and pen, and when I'd see a dress I liked, I'd sketch it down, you know, real fast. And so we copied one dress off of Betty Grable and one off of Marilyn. And it's kind of funny when I look back at the old pictures and say, 'Oh, I remember where I found that type of dress.' "

On Traveling To Concerts With Her Father

"It was very important that my reputation stay intact. And I'm sure that was probably the main reason that he traveled with me. So I wasn't able to ever go from city to city in the car with Elvis. You know, Dad had to drive me; I had to be in my car. And, you know, he didn't allow me to sit on someone's lap, and I couldn't lay my head on someone's shoulder if I was sleepy and they were riding with us, you know. And he was pretty strict in those things. But it did keep my reputation intact."