Accessibility links
Astronaut's Brother Recalls A Man Who Dreamed Big Ronald McNair was one of the astronauts killed 25 years ago on Jan. 28, when the space shuttle Challenger exploded. As his brother recalls, McNair's life was all about exploring boundaries — and exceeding them. 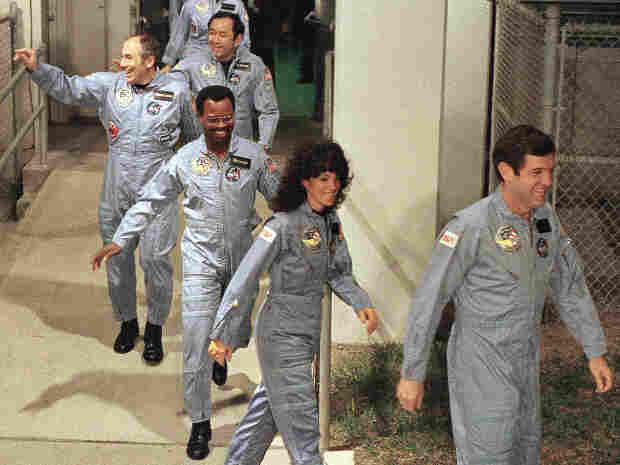 Ronald McNair (third in line) and his fellow Challenger astronauts head to the launch pad at Kennedy Space Center to board the space shuttle on Jan. 27, 1986. Steve Helber/AP hide caption 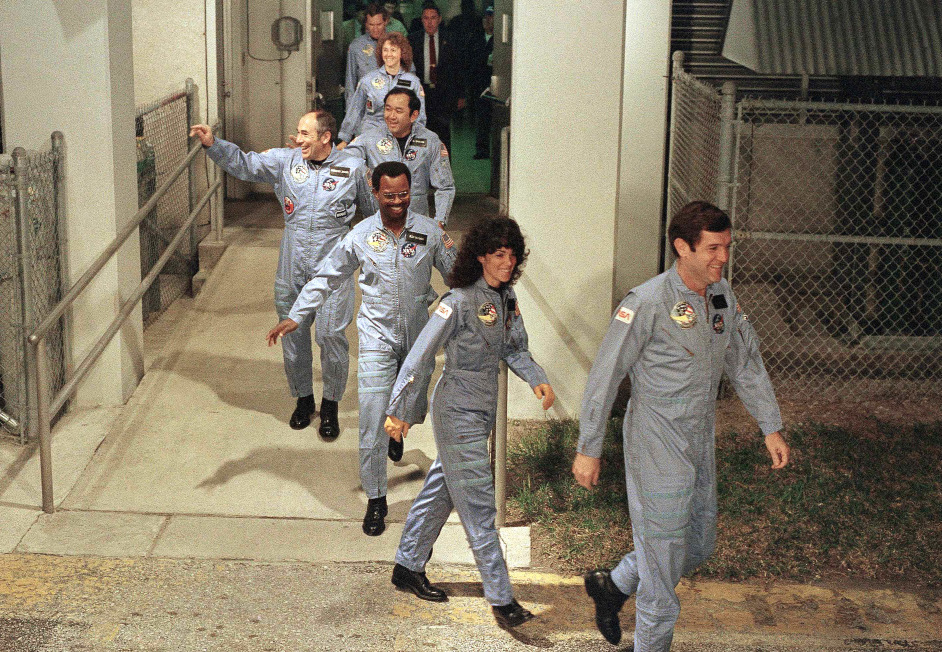 Ronald McNair (third in line) and his fellow Challenger astronauts head to the launch pad at Kennedy Space Center to board the space shuttle on Jan. 27, 1986.

Ronald McNair was one of the astronauts killed 25 years ago on Jan. 28, when the space shuttle Challenger exploded. As his brother recalls, McNair's life was all about exploring boundaries — and exceeding them.

McNair was only the second African-American to visit space. He'd been there once before, aboard a Challenger mission in 1984. On that trip, he played his saxophone while in orbit.

As his older brother, Carl, recalls, McNair started dreaming about space in South Carolina, where he grew up. And he wanted to study science. But first, he needed to get his hands on some advanced books. And that was a problem.

"When he was 9 years old, Ron, without my parents or myself knowing his whereabouts, decided to take a mile walk from our home down to the library," Carl tells his friend Vernon Skipper.

The library was public, Carl says — "but not so public for black folks, when you're talking about 1959."

"So, as he was walking in there, all these folks were staring at him — because they were white folk only — and they were looking at him and saying, you know, 'Who is this Negro?'

"So, he politely positioned himself in line to check out his books.

"Well, this old librarian, she says, 'This library is not for coloreds.' He said, 'Well, I would like to check out these books.' 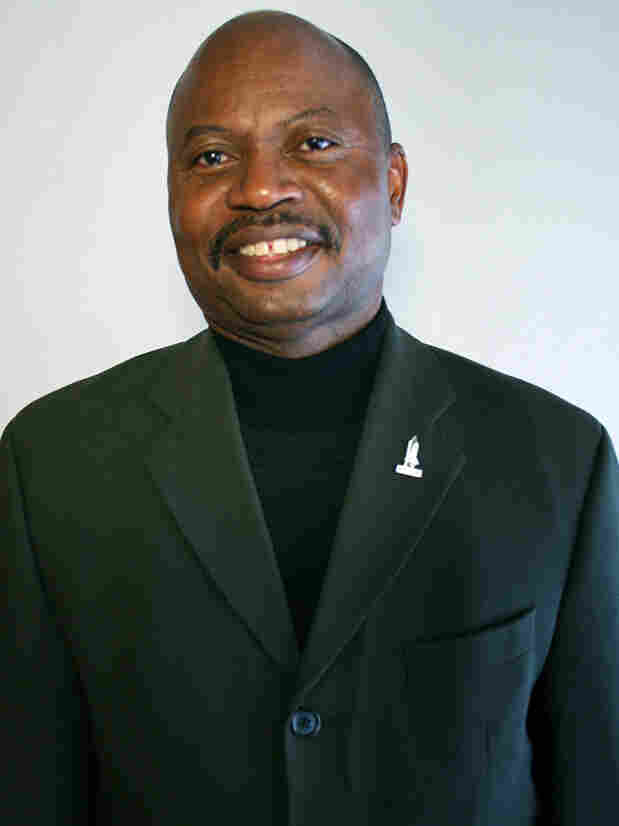 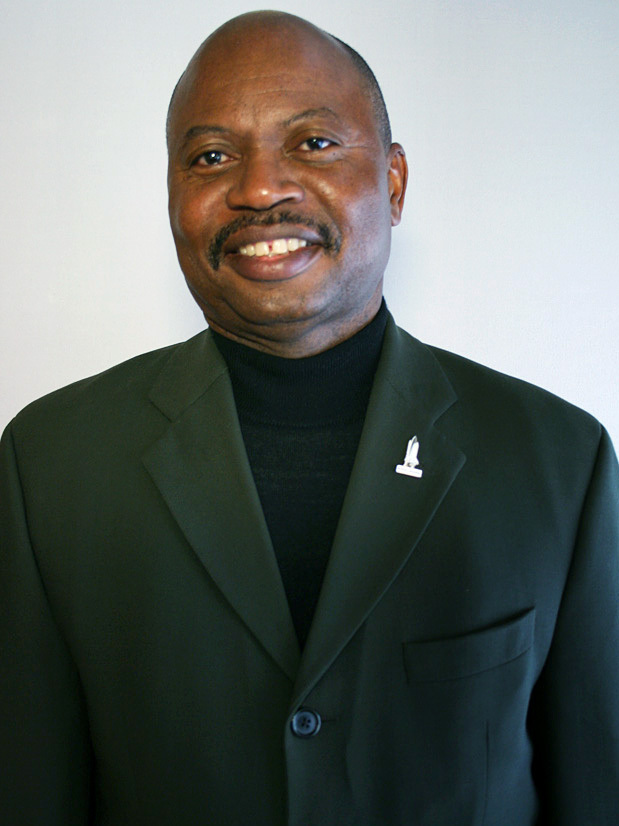 "So he just propped himself up on the counter, and sat there, and said, 'I'll wait.' "

The librarian called the police — and McNair's mother, Pearl.

When the police got to the library, Carl says, "Two burly guys come in and say, 'Well, where's the disturbance?'

"And she pointed to the little 9-year-old boy sitting up on the counter.

By then, the boys' mother was on her way, Carl says.

"She comes down there praying the whole way there: 'Lordy, Jesus, please don't let them put my child in jail.' And my mother asks the librarian, 'What's the problem?' "

"He wanted to check out the books and, you know, your son shouldn't be down here," the librarian said, according to Carl.

"And the police officer said, 'You know, why don't you just give the kid the books?'

So, the librarian reluctantly handed over the books. And then, Carl says, "my mother said, 'What do you say?' "

And Ron answered, "Thank you, ma'am."

Eventually, Ronald McNair graduated from North Carolina A&T State University. And in 1976, he earned a Ph.D. from MIT, in physics. Soon after that, he applied to join NASA's astronaut program.

For Carl McNair, watching his brother's career was like seeing something from the TV shows of his youth.

"As youngsters, a show came on TV called Star Trek," he says. "Now, Star Trek showed the future — where there were black folk and white folk working together."

And back in the 1960s, that premise didn't seem believable, Carl says.

"I just looked at it as science fiction, 'cause that wasn't going to happen, really," he says. "But Ronald saw it as science possibility."

In that era, NASA's astronauts were celebrities — people like Neil Armstrong.

"So how was a colored boy from South Carolina — wearing glasses, never flew a plane — how was he gonna become an astronaut?" Carl says.

"But Ron was one who didn't accept societal norms as being his norm, you know? That was for other people. And he got to be aboard his own Starship Enterprise."

Ronald McNair was 35 at the time of the Challenger tragedy. To mark the anniversary of his death, a ceremony will be held in Lake City on Friday, in which the building that housed McNair's childhood library will be named after him.

The list of people whose lives McNair touched includes Charles Bolden. Like McNair, Bolden grew up in South Carolina, pursued a career in science and became an astronaut. Bolden is now the administrator of NASA.