Financial Crisis Report Seen As Too Little, Too Late

Financial Crisis Report Seen As Too Little, Too Late 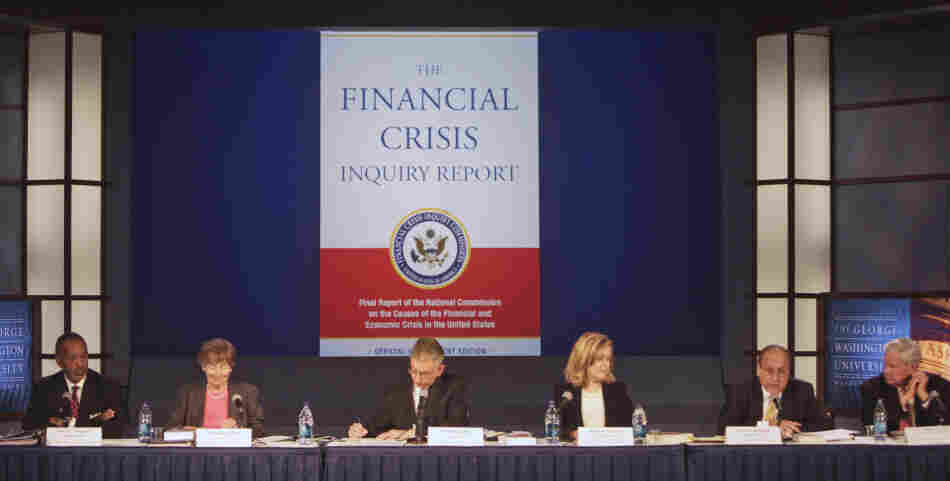 Members of the Financial Crisis Inquiry Commission speak in Washington, D.C., Thursday about the panel's report on the causes of the financial and economic crisis. Jacquelyn Martin/AP hide caption 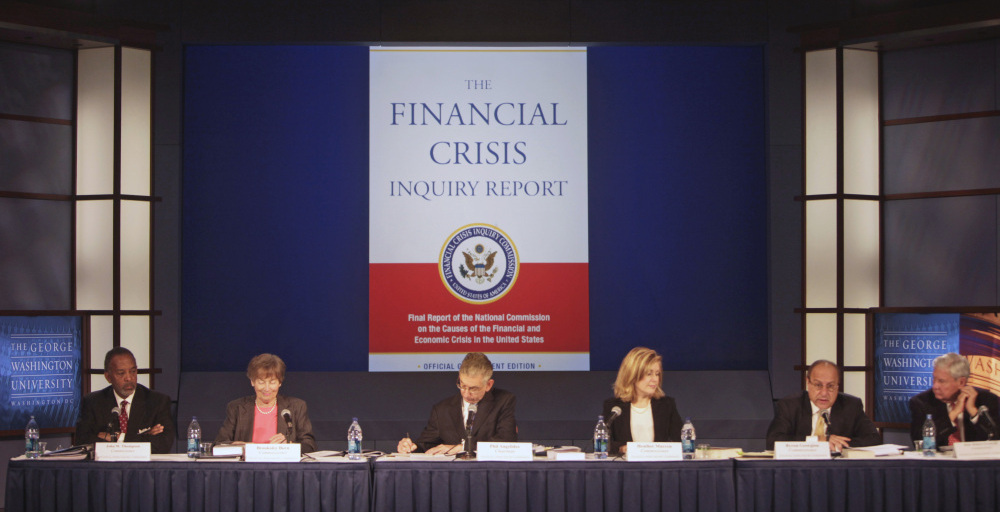 Members of the Financial Crisis Inquiry Commission speak in Washington, D.C., Thursday about the panel's report on the causes of the financial and economic crisis.

A new report on the causes of the nation's 2008 financial crisis has ignited a classic Washington round of political finger-pointing and blame-gaming.

But the Financial Crisis Inquiry Commission report released Thursday and its anti-climactic finding — that the subprime mortgage-fueled disaster was avoidable and that many bear responsibility — has prompted a collective shrug among many analysts and those in the financial community.

"I don't want to denigrate the very hard work and obvious dedication of the commissioners," says David John, a financial markets expert at the Heritage Foundation. "But this is too late, really, to impact this discussion."

The report, financial experts say, not only constitutes a rehash of ground already fully plumbed by myriad books, speeches and seminars, but comes more than six months after Congress passed the so-called Dodd-Frank regulatory overhaul bill designed to address sins that led to the meltdown.

The findings, in the eyes of many analysts, are a day late and a dollar short.

"The opportunity for the report to be really effective largely ended when the president signed the financial reform bill into law," says Scott Talbott, chief lobbyist for The Financial Services Roundtable, which represents the industry.

And the report provides no blueprint to address the bottom-line issue that the crisis laid bare: What should be the future of home financing through government-backed mortgage behemoths Fannie Mae and Freddie Mac?

In fact, that dilemma and the role of those government-sponsored mortgage entities divided the independent commission that was appointed by Congress. Its four Republicans refused to sign on with the majority Democrats' report, and issued two lengthy dissents about who was culpable for the meltdown and why.

"Unfortunately, the politics now are such that this has turned into a pissing match between the New Dealers and the conservatives," says Chris Whelan, a risk management expert and former Wall Street investment banker. "But at least we have it out there, and we'll have a continuing debate."

Whelan says the majority report is flawed because it glosses over the government's role in supporting the mortgage-backed securities that ultimately fueled the financial crisis.

"You cannot divorce the government from the fraud in the private sector," he said.

The Treasury Department this week delayed until February its report on the future of Fannie Mae and Freddie Mac. The highly anticipated report — Treasury Secretary Timothy Geithner has said he'd submit a proposal for comprehensive reform — was originally due by the end of January, according to provisions of the Dodd-Frank law.

Lobbying on all sides has intensified. Sheila Crowley, president of the National Low Income Housing Coalition, is among those who say that the government has to stay involved in backing mortgages; Whelan and others want the government out of the home-financing business.

"There's an awful lot we know about what happened at Fannie and Freddie," says Bert Ely, a Virginia-based financial institutions and monetary policy consultant. "The key questions now are: What do you evolve to, and how do you transition from the situation today, where the government backs almost all mortgages?"

The White House-friendly Center for American Progress on Thursday proposed a system under which the government would provide guarantees for qualified mortgage-backed securities. But the guarantees would be limited, explicit and paid for.

Talbott, of The Financial Services Roundtable, says that organization endorses a system under which private companies could purchase government insurance, and pay premiums for government-backed securities.

"It envisions a targeted, limited and well-defined role for government," he says, "and provides a series of protections before taxpayer dollars are at risk."

That debate over the future of Fannie and Freddie was already firmly on Washington's radar.

"I don't see the report influencing this much — it's all noise and chatter," Ely says, adding that the value of the commission's report may be for historians, somewhere down the line.

John, of the Heritage Foundation, says the commission may have been doomed from the start.

"If you look at the three reports — the majority report and the two Republican alternatives — you'll find some truth in all of them," he says. "But this is just going to be an interesting footnote."