Accessibility links
The Root: When Cutting Budgets, Remember The Poor In the State of the Union, Obama stated that there would be sweeping budget cuts, even in programs such as Medicare, to reduce the national debt. Cynthia Gordy of The Root analyzes the Congressional Black Caucus budget commission's stance on the deficit, and says that the U.S. must be also be aware to the needs of the poor and minority communities.

The Root: When Cutting Budgets, Remember The Poor

The Root: When Cutting Budgets, Remember The Poor 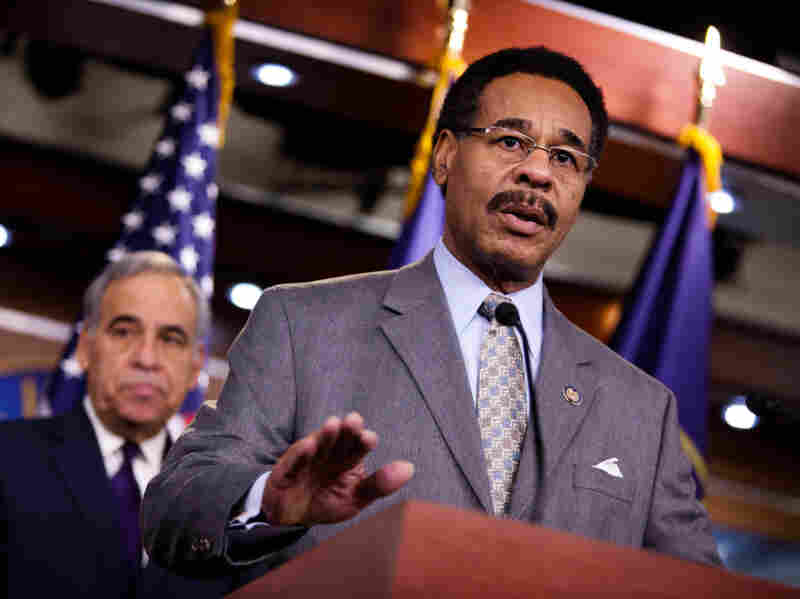 Rep. Emanuel Cleaver (D-MO) speaks at a news conference on the impact of a health care repeal on minority communities in Washington, D.C. Cleaver says that the national deficit is taking money away from crucial programs that minorities and other vulnerable communities need. Brendan Hoffman/Getty Images hide caption 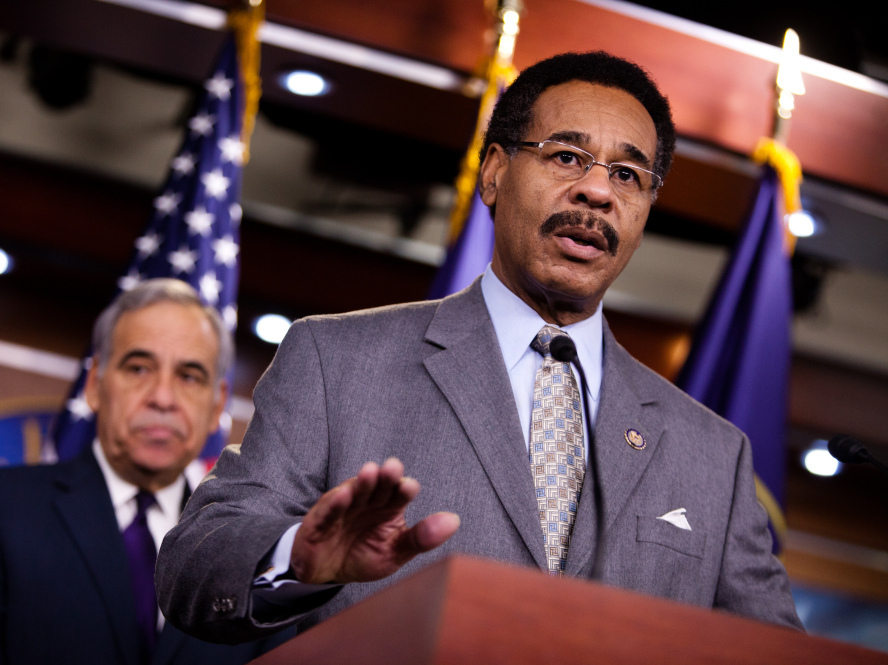 Rep. Emanuel Cleaver (D-MO) speaks at a news conference on the impact of a health care repeal on minority communities in Washington, D.C. Cleaver says that the national deficit is taking money away from crucial programs that minorities and other vulnerable communities need.

Cynthia Gordy is the Washington reporter for The Root.

Just about everyone in Washington these days is busying themselves talking about America's debt, plugging their ideas as the surefire solution to trim the deficit. In Tuesday's State of the Union address, President Obama offered belt-tightening proposals based on the recommendations of his bipartisan fiscal commission. Last week, House Republicans introduced a bill to sharply curb federal spending. But — despite those photos from countless Tea Party demonstrations, of children holding signs gloomily bemoaning their future debt — for most Americans, budget deficits aren't high on their list of concerns.

According to a November CBS News poll, only 4 percent of Americans consider the deficit to be the country's most pressing issue. Yet Missouri Rep. Emanuel Cleaver, chairman of the Congressional Black Caucus, says that for African Americans in particular, the federal deficit and debt are downright critical. "Right now our national debt payment is erasing money from programs that vulnerable populations desperately need," he told The Root in an exclusive interview, framing the issue as one that determines government provision for things like safe infrastructure, food programs for the poor and health care for seniors.

The CBC is bringing this perspective to the debate through the creation of its first-ever budget commission. Composed of top African-American economists from around the country, the Commission on the Budget Deficit, Economic Crisis, and Wealth Creation convenes today on Capitol Hill with recommendations for addressing the growing deficit without harming low-income communities. The CBC will use the commission's findings for a caucus budget plan that it will submit to Congress and the Obama administration.

"It is extremely important to have a budget proposal that comes from the vantage point of poor people," said Cleaver, arguing that most budget reports make wholesale spending cuts without considering how they affect the economically disadvantaged. "Despite the fact that you don't hear much about minorities and poor people in Washington anymore, you can expect the CBC to still talk about what happens to them."

Although the CBC presents an alternative budget on the House floor every year, this time around it's taking special care to publicly state its priorities in advance of the president's budget, which comes out in three weeks. "We're going to proactively deal with the issue before it is front-page news around the nation," said Cleaver, who is getting additional legislation-drafting support thanks to the new position of CBC policy director, held by 32-year-old Brandon Garrett. "This year we just can't afford to be reactionary."

That said, the CBC budget commission is certainly responding to the federal spending bill introduced by House Republicans. Buoyed by new statistics from the Congressional Budget Office, which on Wednesday estimated that the country will have a $1.5 trillion deficit in 2011, GOP members are pushing their plan to cut all nondefense discretionary spending down to 2008 levels for the rest of the year. This would drastically shrink funding for vital social services, according to Darrell Gaskin, an associate professor at the Johns Hopkins Bloomberg School of Public Health and a member of the CBC budget commission.

"It always seems that when it comes time to cut, the most vulnerable — the poor, children and senior citizens — end up being the first to have their services reduced," said Gaskin. For him, Republicans lost all credibility for handling the deficit by insisting on tax breaks for the wealthiest Americans, which he says will only add to the nation's debt. "It never seems to be a shared sacrifice. The rhetoric is always to try to demonize people who are struggling."

Putting it bluntly, Gaskin says that given extreme economic hardships in the country, people shouldn't even be talking about actually balancing the budget now. "Most economists would argue that when the government pulls back on spending during a recession, all it does is make the situation worse," he says. "We should try to get the economy back in line by getting demand up, improving consumer confidence, investing in our infrastructure and improving our manufacturing base."

Cleaver adds that the CBC will not support Republicans' proposed across-the-board cuts, especially to the departments of Education, Labor and Transportation, because investments in those areas are critical to job creation and preparation. "We approved the stimulus act, not because we wanted to go to our home districts and get cussed out at town-hall meetings, but because the economy needed to be stimulated," said Cleaver. "This is not the time to go in and start ransacking, for example, the Labor Department's budget. We've got to create jobs for Americans."

The CBC chairman is also none too happy with President Obama's pitch, announced during his State of the Union speech, to reduce health care costs in programs like Medicare and Medicaid — among the biggest areas of the federal budget. "To make further progress, we have to stop pretending that cutting [discretionary] spending alone will be enough," Obama said on Tuesday evening to lukewarm applause. The president further declared that, if we're serious about tackling the problem, cuts would also have to be made in defense spending.

Cleaver is particularly against cuts to Medicare, even reductions that are unrelated to the actual administration of services. With House Republicans wielding the potential to vote against funding the health care reform law — which includes billions of dollars for community health centers in underserved communities — he's simply unwilling to tamper with the program designed to help senior citizens. Besides, in many states, such as his native Missouri, funding shortages have the program in trouble. "With all these uncertainties," he said, "why in the world would we want to start cutting Medicare?"

What federal programs, then, is the Congressional Black Caucus willing to cut back on? The caucus is holding off on giving an official position until its budget commission presents its recommendations, but Cleaver offered his personal view that there are numerous excesses in the defense budget.

"If we're spending $10 billion to $14 billion a month on wars in Afghanistan and Iraq, it doesn't take much imagination to see what's dragging us down," said Cleaver, who has voted against funding both wars. As an example of what he considers to be wasteful defense spending, he cited Congress' continued votes to fund new C-17 transport planes — despite the fact that the Air Force has repeatedly stated that it doesn't want them. "We have enough bombs to destroy the world twice, but there are people who would like us to be able to do it 12 times," he quipped.

Whatever suggestions the Congressional Black Caucus (or Rep. Cleaver, for that matter) ultimately has for the federal budget, the body knows it will be a gargantuan task to see its priorities represented in a House of Representatives controlled by an overwhelming Republican majority. Cleaver is frustrated by the quandary of being outnumbered, but maintained that it will not dampen the caucus' commitment to having its say, and saying it loudly.

"I'll tell you this," he said. "One of the things that we are going to do at the CBC is make sure people around the country know whose side we're on."