Accessibility links
The New Republic: The U.S. Could Learn From Finland In his State of the Union address, Obama talked about raising the standards for education in the United States. Samuel E. Abrams of The New Republic argues that perhaps Finland could teach the U.S. a thing or two in about education reform.

The New Republic: The U.S. Could Learn From Finland

The New Republic: The U.S. Could Learn From Finland 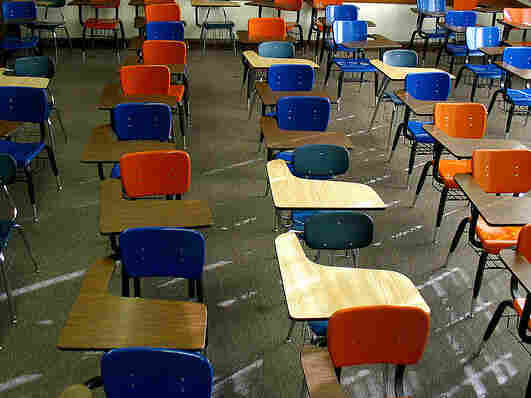 In the 2009 Program for International Student Assessment exam results, Finland scored among the top. The United States sat in the middle. Christopher Sessums/flickr hide caption 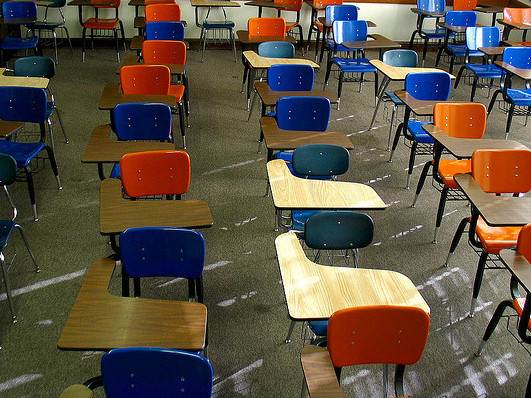 In the 2009 Program for International Student Assessment exam results, Finland scored among the top. The United States sat in the middle.

Samuel E. Abrams is a visiting scholar at Teachers College, Columbia University, and he is writing a book on school reform.

While observing recess outside the Kallahti Comprehensive School on the eastern edge of Helsinki on a chilly day in April 2009, I asked Principal Timo Heikkinen if students go out when it's very cold. Heikkinen said they do. I then asked Heikkinen if they go out when it's very, very cold. Heikkinen smiled and said, "If minus 15 [Celsius] and windy, maybe not, but otherwise, yes. The children can't learn if they don't play. The children must play."

In comparison to the United States and many other industrialized nations, the Finns have implemented a radically different model of educational reform — based on a balanced curriculum and professionalization, not testing. Not only do Finnish educational authorities provide students with far more recess than their U.S. counterparts — 75 minutes a day in Finnish elementary schools versus an average of 27 minutes in the U.S. — but they also mandate lots of arts and crafts, more learning by doing, rigorous standards for teacher certification, higher teacher pay, and attractive working conditions. This is a far cry from the U.S. concentration on testing in reading and math since the enactment of No Child Left Behind in 2002, which has led school districts across the country, according to a survey by the Center on Education Policy, to significantly narrow their curricula. And the Finns' efforts are paying off: In December, the results from the 2009 Program for International Student Assessment (PISA), an exam in reading, math, and science given every three years since 2000 to approximately 5,000 15-year-olds in nations around the world, revealed that, for the fourth consecutive time, Finnish students posted stellar scores. The United States, meanwhile, lagged in the middle of the pack.

In his State of the Union address, President Obama outlined his plans for reforming U.S. public education, including distributing competitive grants, raising test scores, and holding teachers accountable for student achievement. But there is much Finland can teach America's reformers, and the rest of the world, about what outside of testing and rigid modes of management and assessment can make a nation's schools truly excellent.

Finland's schools weren't always so successful. In the 1960s, they were middling at best. In 1971, a government commission concluded that, poor as the nation was in natural resources, it had to modernize its economy and could only do so by first improving its schools. To that end, the government agreed to reduce class size, boost teacher pay, and require that, by 1979, all teachers complete a rigorous master's program.

Today, teaching is such a desirable profession that only one in ten applicants to the country's eight master's programs in education is accepted. In the United States, on the other hand, college graduates may become teachers without earning a master's. What's more, Finnish teachers earn very competitive salaries: High school teachers with 15 years of experience make 102 percent of what their fellow university graduates do. In the United States, by contrast, they earn just 65 percent.

Though, unlike U.S. education reformers, Finnish authorities haven't outsourced school management to for-profit or non-profit organizations, implemented merit pay, or ranked teachers and schools according to test results, they've made excellent use of business strategies. They've won the war for talent by making teaching so appealing. In choosing principals, superintendents, and policymakers from inside the education world rather than looking outside it, Finnish authorities have likewise taken a page from the corporate playbook: Great organizations, as the business historian Alfred Chandler documented, cultivate talent from within. Of the many officials I interviewed at the Finnish Ministry of Education, the National Board of Education, the Education Evaluation Council, and the Helsinki Department of Education, all had been teachers for at least four years.

The Finnish approach to pedagogy is also distinct. In grades seven through nine, for instance, classes in science — the subject in which Finnish students have done especially well on PISA — are capped at 16 so students may do labs each lesson. And students in grades one through nine spend from four to eleven periods each week taking classes in art, music, cooking, carpentry, metalwork, and textiles. These classes provide natural venues for learning math and science, nurture critical cooperative skills, and implicitly cultivate respect for people who make their living working with their hands.

But perhaps most striking on the list of what makes Finland's school system unique is that the country has deliberately rejected the prevailing standardization movement. While nations around the world introduced heavy standardized testing regimes in the 1990s, the Finnish National Board of Education concluded that such tests would consume too much instructional time, cost too much to construct, proctor, and grade, and generate undue stress. The Finnish answer to standardized tests has been to give exams to small but statistically significant samples of students and to trust teachers — so much so that the National Board of Education closed its inspectorate in 1991. Teachers in Finland design their own courses, using a national curriculum as a guide, not a blueprint, and spend about 80 percent as much time leading classes as their U.S. counterparts do, so that they have sufficient opportunity to plan lessons and collaborate with colleagues. The only point at which all Finnish students take standardized exams is as high school seniors if they wish to go to university.

Regard for students' well-being is evident in more subtle ways, as well. Since 1985, students have not been tracked (or grouped by ability) until the tenth grade. Furthermore, since 1991, authorities have rejected the practice of holding back underachievers, concluding that the consequences of grade repetition were too stigmatizing to be effective and that students would be better off being tutored by learning specialists in areas of academic weakness.

The Finnish business community and conservative members of the country's parliament criticized the end of tracking as a recipe for mass mediocrity — but they went silent following the publication of the 2000 PISA results. "PISA was a lucky gift for Finnish educators," said Kari Louhivuori, the principal of the Kirkkojärvi Comprehensive School in Espoo, who began his career as a teacher in 1974. "We were under attack from traditional forces and needed outside validation of our new way." (Some testing is thus ultimately necessary, Louhivuori conceded, if only to prove that regular testing is not.) What's more, there is now strong proof of the economic benefits of the Finnish educational reformation, particularly in the country's high-tech sector, which is distinguished by Nokia in telecommunications, Orion in medical diagnostics and pharmaceuticals, Polar in heart-rate monitors, Vaisala in meteorological measurement, and VTI in accelerometers. Flanking highways out of Helsinki are research centers for these companies, as well as ones for Ericsson, IBM, and SAP.

The reflexive critique of comparing the Finnish and U.S. educational systems is to say that Finland's PISA results are consequences of the country being a much smaller, more homogeneous nation (5.3 million people, only 4 percent of whom are foreign-born). How could it possibly offer lessons to a country the size of the United States? The answer is next door. Norway is also small (4.8 million people) and nearly as homogeneous (10 percent foreign-born), but it is more akin to the United States than to Finland in its approach to education: Teachers don't need master's degrees; high school teachers with 15 years of experience earn only 70 percent of what fellow university graduates make; and in 2006, authorities implemented a national system of standardized testing. The need for talent in the classroom is now so great that the Norwegian government is spending $3.3 million on an ad campaign to attract people to teaching and, last year, launched its own version of Teach for America in collaboration with Statoil — called Teach First Norway — to recruit teachers of math and science.

Moreover, much as in the United States, classes in Norway are typically too large and equipment too scarce to run science labs. A science teacher at a middle school in Oslo told me that labs are unfortunately the exception, not the rule, and that she couldn't recall doing any labs as a student a decade ago. Unsurprisingly, much as in 2000, 2003, and 2006, Norway in 2009 posted mediocre PISA scores, indicating that it is not necessarily size and homogeneity but, rather, policy choices that lead to a country's educational success.

The Finns have made clear that, in any country, no matter its size or composition, there is much wisdom to minimizing testing and instead investing in broader curricula, smaller classes, and better training, pay, and treatment of teachers. The United States should take heed.