Accessibility links
The Weekly Standard: Imagining Egypt During Bush On Thursday night, Vice President Joe Biden stated on PBS "NewsHour" that Hosni Mubarak, the Egyptian president who has inspired the civil unrest in recent days, is not a dictator. Lee Smith of The Weekly Standard argues how different the conflicts in Egypt would have played out during the presidency of George W. Bush. 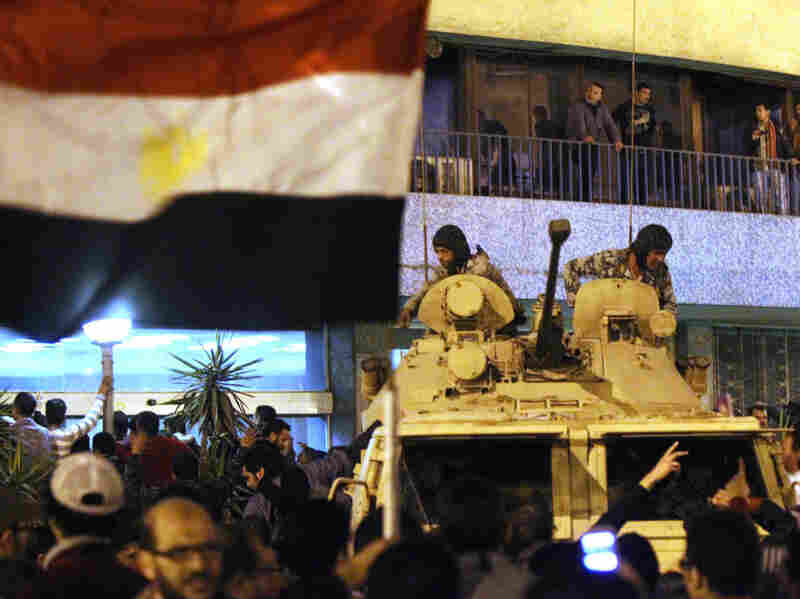 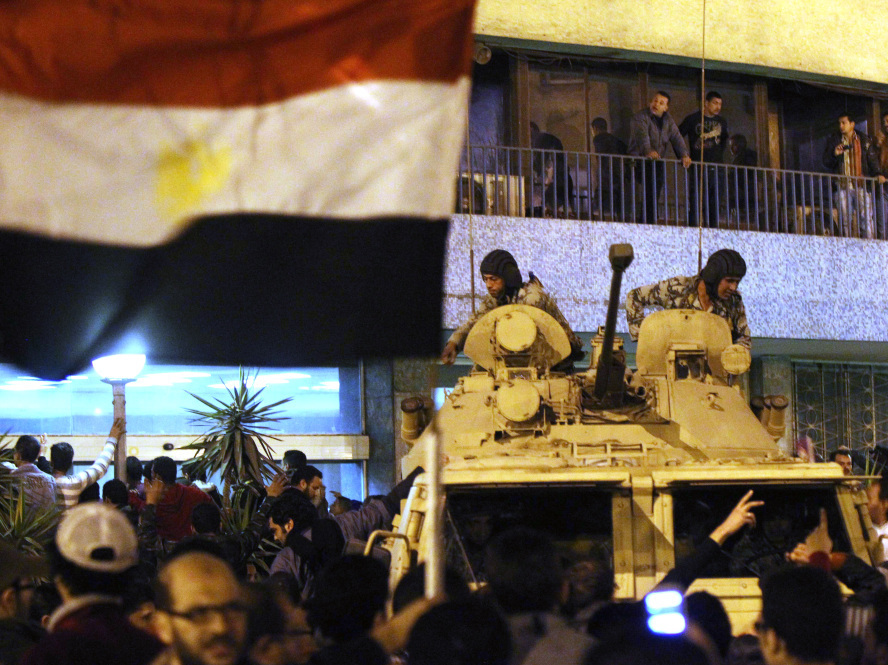 Egyptian demonstrators demanding the ouster of President Hosni Mubarak gather around the national television building guarded by members of the Presidential guard in Cairo. Friday marks the fourth consecutive day of protests in Egypt.

Lee Smith is a senior editor at The Weekly Standard. He is the author of The Strong Horse: Power, Politics, and the Clash of Arab Civilizations.

Reports from Egypt say that protests across the country's major cities are getting violent. And now the ruling National Democratic Party's headquarters are on fire in Cairo (follow the live stream here). But even before the demonstrations that were held after Friday prayers today turned volatile, Egyptian authorities had turned up the heat. Here's a disturbing YouTube video of a lone protestor shot in the back, presumably by security officials.

What's changed in the last 24 hours is that Mubarak has called out the army to work in tandem with the Central Security Forces. It's worth recalling that the country's last wide-scale riots in 1986 were essentially instigated by the Central Security Forces when it demanded a hike in wages. Central Security Forces officers are generally drawn from the same socio-economic strata of Egypt that's taken to the streets of Cairo, Alexandria, etc., whereas the military is more like a sequestered elite. In addition, there are longstanding rivalries between Egypt's internal security apparatus and its foreign intelligence services aligned with the military. The arrival of the army suggests that it has now earned some leverage in whatever internal struggles are taking place in the regime.

On Thursday night Vice President Biden told PBS's "Newshour" that Mubarak wasn't a dictator, which is probably going to anger a lot of those same Muslim masses his boss has been courting ever since he delivered that Cairo speech in 2009. No doubt Biden's remarks are drawing chuckles from the Bush administration, which loathed Mubarak. It is interesting to wonder what might have happened had these same protests erupted 5 years ago when the Bush White House was feeling its oats with victories for the freedom agenda in Iraq and then Lebanon. Mubarak pushed back with the 2005 parliamentary elections when he awarded the Muslim Brotherhood some 20 percent of the seats — if you want democracy, the Egyptian president seemed to be warning the White House, I'll stick Osama bin Laden's friends in parliament. Under little pressure from the Obama administration to democratize, Mubarak felt no reason to frighten Washington during the latest round of parliamentary elections this fall, when as Jennifer Rubin, reported in our December 20 issue, the Brotherhood won only one seat.

Read Another Opinion On The Protests In Egypt

The Bush NSC was constantly at odds over Egypt with the State Department, where the bureau of Near East affairs, headed then by one-time ambassador to Cairo David Welch, argued that Mubarak was a pillar of regional stability. Whether or not Mubarak is good for U.S. national interests, the Bush White House is now proven right in at least this one regard: The regional status quo is not stable. Who knows what might have happened 5 years ago, had the streets of Cairo been burning and Bush had suggested to the Egyptian president that it was time to step aside?

The best English-language news sources right now, for up to the minute coverage of the breaking news from Egypt, with videos and live feeds, are Al Jazeera English, Al Arabiya English, and the independently owned Egyptian daily Al Masry Al Youm.