Accessibility links
Despite Good News, Ford Has Long Road Ahead Ford Motor Co. earned $6.6 billion in 2010 — its highest profit in a decade. Still, the company is not out of the woods. It's stock price dropped 13 percent on Friday, it's trying to climb out of debt, and it could face tough union negotiations just as it's trying to secure a foothold in the Chinese car market. 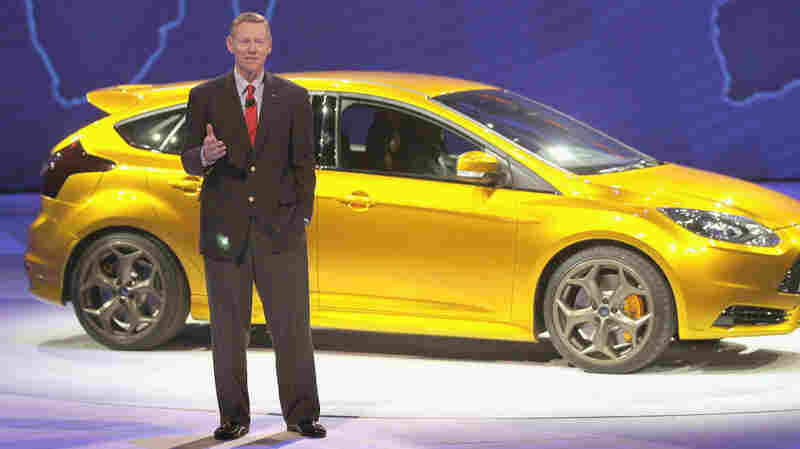 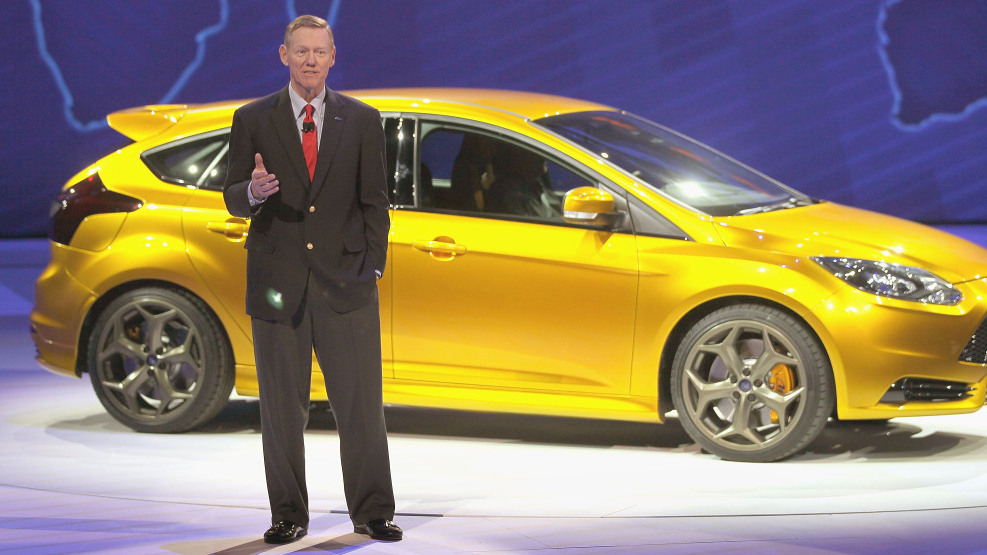 Ford CEO Alan Mulally, pictured with the 2011 Ford Focus, is credited with turning the company around. But analysts say the automaker still faces formidable challenges ahead.

Ford Motor Co. announced its biggest profits in a decade on Friday.

But despite the upbeat news, Ford's stock price fell more than 13 percent on Friday. Even though 2010 was the company's most profitable year since 1999, many analysts had hoped the numbers would be even better.

The Man Behind The Turnaround

Mulally came to the automaker from Boeing in 2006. Analysts say he is the force behind the company's recent turnaround.

Ford also announced Friday that it will pay an average of $5,000 in profit sharing to nearly 41,000 eligible hourly employees in the U.S.

"You think about back then and now — this is a complete transformation of Ford," Mulally said.

The year 1999 is ancient history for the auto industry. It was before gas prices spiked, before the economic collapse and before the deep recession.

Gary Bradshaw, a portfolio manager with Hodges Capital Management, says Ford was able to capitalize on its chief competitors' misfortunes during the past decade.

"The consumer has come back in a big way at the time that General Motors has [stubbed] their toe by going into bankruptcy," Bradshaw says. "And that's left a sour taste in the consumer's mouth."

Bradshaw and other analysts say Ford has been benefiting from a halo effect. By introducing new products and offering incentives, Ford was able to take market share from General Motors and Toyota.

GM is struggling to get out from under the "Government Motors" tag, while Toyota faces depressed sales, in part because of its product recalls.

In recent years, Ford dropped foreign luxury brands Jaguar, Land Rover and Volvo. It also shuttered Mercury to focus on the Ford and Lincoln brands. All those cuts reduced costs and added to the company's bottom line.

But Ford still has some problems. Analysts say the automaker needs to attract more customers overseas, and especially in China, where it sold only a half-million vehicles.

Ford also needs to take advantage of any trade pact that the U.S. and South Korea sign, analysts say.

Instead of filing for bankruptcy, Ford went into debt. David Whiston, an investment analyst with Morningstar, says the company's debt could pose a problem. "Their credit is less than ideal," he says. "And it's getting better, which is good. But it's not there yet. So, they do pay a higher funding cost than, say, Toyota's."

CEO Mulally says the company is committed to paying down the debt by year's end. When Ford pays its debt, the company will be able to reach investment status, which will allow the company's captive finance arm — Ford Motor Credit — to borrow and lend money at a lower interest rate.

Analysts say that could mean billions in revenue in the next year.

Ford is the only one of Detroit's Big Three that does not have a no-strike clause in its contract with the United Auto Workers union. GM and Chrysler both struck deals with the UAW as a part of the bankruptcy process.

George Magliano, an analyst with IHS Automotive, says Ford's profits could put it in a tough negotiating position. "It is paramount that they get this union contract nailed down," he says. "And get it nailed down peaceably."

Ford relies heavily on its popular F-150 truck. If gas once again hits $4 a gallon, that could cause a severe drop in sales.

"And that's going to weigh heavy on the consumer's mind again," Bradshaw says. "And will he be buying the new F-150 trucks or the diesel trucks where they have better profit margins?"

A previous Web version of this story incorrectly said North Korea instead of South Korea in reference to possible trade pacts.