Accessibility links
Egyptian President Asks Cabinet To Resign President Hosni Mubarak defended the actions of Egyptian security forces against protesters during a televised address. Armored military vehicles rumbled through the streets of the Egyptian capital on Friday during a countrywide crackdown on the anti-government protesters, who went head to head with riot police.

Egyptian President Hosni Mubarak said he has asked his Cabinet to resign in his first appearance on television since protests erupted demanding his ouster. 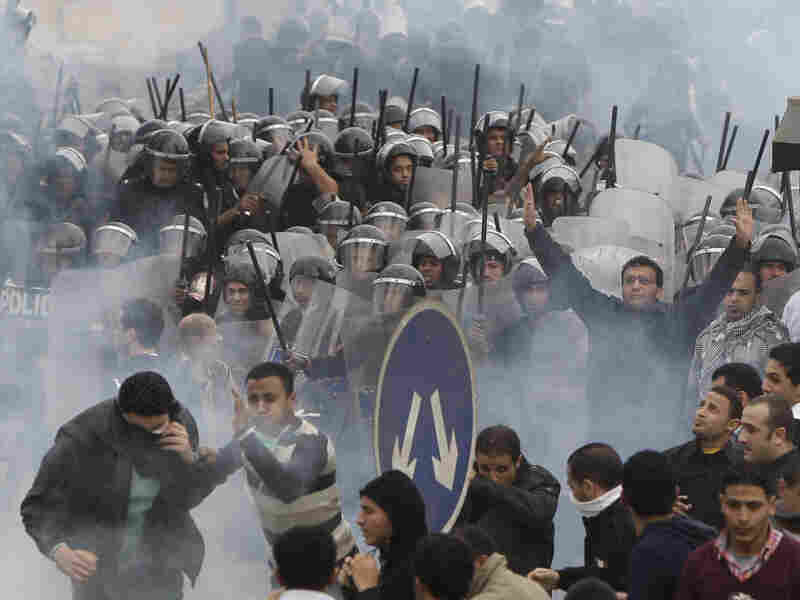 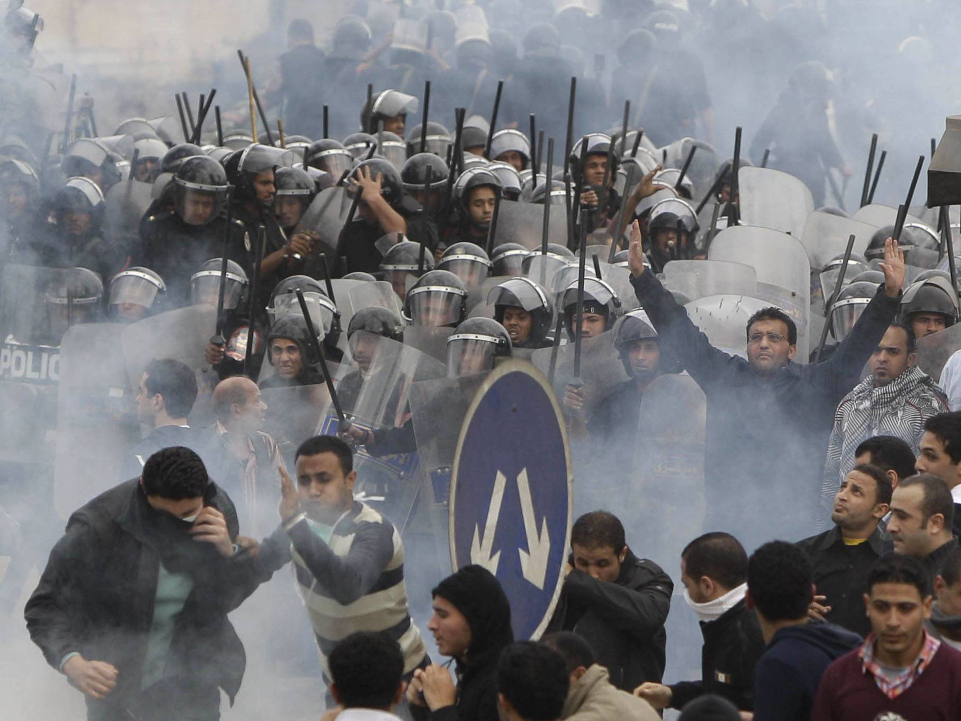 Mubarak said he would press ahead with social, economic and political reforms, but he defended the actions of Egyptian security forces against protesters.

"We want more democracy, more efforts to combat unemployment and poverty and combat corruption," a somber-looking Mubarak said, calling the protests "part of a bigger plot to shake the stability and destroy the legitimacy" of the political system.

Armored military vehicles rumbled through the streets of the Egyptian capital on Friday during a countrywide crackdown on the anti-government protesters, who went head to head with riot police and set fire to the ruling party headquarters.

TV broadcasts showed armored personnel carriers at key intersections in Cairo on a day of protests that saw stones hurled by demonstrators met by rubber bullets, tear gas and water cannons from police. The ruling party headquarters in the capital was set ablaze and the country's main opposition leader was placed under house arrest as part of the crackdown.

President Obama said he had spoken with Mubarak after the Egyptian president's speech and pressed him to take action on his pledges of reform.

Many protesters, however, were infuriated by Mubarak's speech.

"We want Mubarak to go and instead he is digging in further," protester Kamal Mohammad said. "He thinks it is calming down the situation but he is just angering people more."

Security officials said there were protests in at least 11 of Egypt's 28 provinces. The scenes of chaos were a near replay of the violence that swept through another North African country, Tunisia, earlier this month and forced out the autocratic government.

Egypt's national carrier, EgyptAir, said it had suspended its flights from Cairo for 12 hours.

Mubarak ordered a nationwide nightly curfew from 6 p.m. to 7 a.m. He told the military to work in tandem with police to enforce the dusk-to-dawn lockdown.

In Cairo, riot police wearing helmets and carrying shields moved in early Friday to intercept anti-government demonstrators heading to Tahrir Square, which had become center stage for the protests in the capital.

The protesters marched across the Kasr Al Nile Bridge and were moving toward the square when police began firing tear gas and water cannons into the crowd.

Tahrir has become "sort of the symbolic flashpoint, if you will, for both sides," said NPR's Soraya Sarhaddi Nelson, reporting from a hotel overlooking the square.

She said protesters made their way toward the square despite a nonstop barrage of tear gas — "wearing headscarves or rubbing onion onto their nostrils and their eyes."

But after the army moved in, Nelson said, things changed. "There are still protesters out there, but everyone is quite peaceful and calm."

Earlier in the afternoon, Nelson said she saw "many protesters carrying other protesters that were bloodied and injured."

Al-Jazeera said at least one person was killed. The Qatar-based news channel also said that Ayman Nour, a contender in Egypt's 2005 presidential race, was among the dozens wounded in Tahrir Square.

Nobel Peace Prize laureate and pro-democracy advocate Mohamed ElBaradei joined protesters early in the day but was later placed under house arrest at his suburban Cairo home a day after he returned to Egypt vowing to push for regime change.

ElBaradei was among those who were hit by water cannons during the protest. Some of his supporters were beaten by police after forming a barrier with their bodies in an effort to protect him. ElBaradei was later forced to hole up inside a mosque while hundreds of riot police laid siege to it, firing tear gas in the surrounding streets so no one could leave.

At the upscale Mohandiseen district, at least 10,000 people marched toward the city center chanting "Down, down with Mubarak!" The crowd later swelled to about 20,000 as they made their way through residential areas.

The Egyptian protesters wanted "Mr. Mubarak to step down, his regime to go, his Cabinet to leave [and] the Parliament that was elected in controversial elections" in 2005 to be dissolved, Nelson reported.

The protesters also gained the backing of the country's biggest opposition group, the Islamic fundamentalist Muslim Brotherhood, which called on its supporters to join the demonstrations.

Earlier, authorities shut down Internet and cell phone services nationwide in an apparent effort to disrupt the protests that have quickly grown into the biggest-ever challenge to Mubarak in his three decades of rule.

Mubarak, 82, is Washington's closest Arab ally. But the United States has publicly counseled him to introduce reform and refrain from using violence against the protesters.

White House press secretary Robert Gibbs told reporters Friday afternoon that the United States "will be reviewing our assistance posture based on events in the coming days" in Egypt, but did not offer specifics.

Secretary of State Hillary Clinton called on the Egyptian government "to do everything in its power to restrain security forces" but noted that "protesters should also refrain from violence and express themselves peacefully."

"We want to continue to partner with the Egyptian government and the Egyptian people. What will eventually happen in Egypt is still up to Egyptians," Clinton told reporters in Washington.

Daniel Kurtzer, U.S. ambassador to Egypt from 1997 until 2001, told NPR that Mubarak's decision to ask his government to step down is a "short-term pacifier." Whether it works will depend, in part, on whom Mubarak chooses for the Cabinet, Kurtzer said.

"On the one hand, he's defiant; he is indicating that he has no intention to take personal responsibility, as it were, for what the demonstrators are claiming is the malfeasance of the regime," Kurtzer said. "On the other hand, he has indicated a willingness to what he called dialogue and communications."