Accessibility links
Gang Of Four: New 'Content,' Same Classic Sound Content is Gang of Four's first studio record in 16 years. Within its first moments, the classic sound of angular but danceable post-punk is instantly recognizable. Singer Jon King says it's a privilege to have "inspired other musicians to make great music." 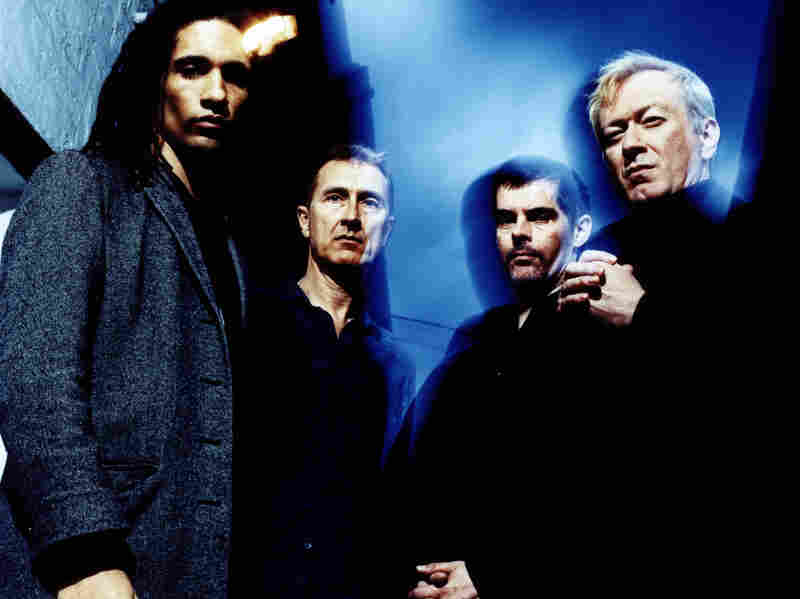 Gang of Four singer Jon King (second from left) says it's a privilege to have "inspired other musicians to make great music." Steve Gullick/Courtesy of the artist hide caption

Gang of Four singer Jon King (second from left) says it's a privilege to have "inspired other musicians to make great music."

She Said You Made A Thing Of Me

You'll Never Pay For The Farm

Content is Gang of Four's first studio record in 16 years. Within its first moments, the classic sound of angular but danceable post-punk is instantly recognizable. Vocalist Jon King says the new songs were written when the band was touring with its classic material (namely, Entertainment! and Solid Gold), but was Gang of Four looking to update its original sound?

"I wouldn't date it so much — it's just that that's the sound that we have developed for ourselves," King tells Weekend All Things Considered host Guy Raz. "I think once you've got something that you think is yours, and that you own, you're likely to go into those same territories."

Sharp political commentary has long been part of Gang of Four's modus operandi, and King doesn't let up on Content, notably in "You'll Never Pay for the Farm."

" 'You'll Never Pay for the Farm' " was the first track that we'd written," King says. "This is about two years old, this song. There had been a catastrophic collapse in the financial world caused by these gambling criminals who've made gigantic profits from other people's misery and expected us all to fund their gambling. This is one of those songs that you've got an element of reverse engineering about it, because the line, 'You'll never pay for the farm' was something that I thought was interesting. Soldiers in combat since the Second World War often used the phrase when someone got killed: 'He bought the farm.' What we all struggle to do as we go along in our lives is to pay for the farm. The irony since the collapse of finance is that we spend the whole time on this drudging treadmill to pay for the farm, but anytime you get to pay for the farm is when you've bought the farm."

King's lyrics have always meant different things to different people. Some see his words as a reaction to Margaret Thatcher, unemployment in early-'80s Britain or the unraveling of the unions. But King says he was more interested in "changing the meaning of things by the label."

"I remember when I was 15, I got incredibly excited when I found some grubby old book in a secondhand bookshop about the revolution in Paris in 1968," King says. "There was a picture, which I still cherish — it was a photograph for some kind of perfume and a very glamorous-looking woman on this poster, and someone had written on it in French: 'I'm now exploiting you, but I'm not doing it on purpose.' I got terribly excited by the fact ... you can change the meaning of things by the label. That predated Thatcher's arrival by a few years. When I was at the university, the things that I was very interested in were this approach. I wondered how one could play around with these sorts of ideas in music. That said, there is no better time to be a musician — when you have a reactionary and oppressive government who are trying to grind the faces of the poor and the underprivileged into the dirt like we have at the moment in [the U.K.]."

Hear A Montage Of Bands Influenced By Gang Of Four

Many bands have pointed to Gang of Four as a major influence. In their interview, NPR's Guy Raz plays Jon King a montage of songs by Franz Ferdinand, !!!, The Futureheads, The Rapture, Radio 4 and Bloc Party.

"I think it's a great privilege to have somehow or other inspired other musicians to make great music," King says of these bands. "[I'm] pompously comparing ourselves to Led Zeppelin, but Led Zeppelin probably feel the same [about the] infinitely varied use of the drum intro to 'Black Dog' by every hip-hop band in history. It must be quite fun. There's something there that was so vibrant, and in itself, it was worth other musicians quoting. That's a tremendous compliment."

A huge part of Gang of Four's fan base wasn't even born when Entertainment! was first released in 1979. King recalls the story of when he took his 15-year-old daughter to see Gang of Four perform a sold-out concert at Shepherd's Bush Empire. The next two compartments of the London Underground train were full of her classmates, all waiting to see Gang of Four.

"I think it's because we are an oppositional band," King says. "I think people are sick of the commercial bands, the karaoke acts you see on American Idol and X-Factor. I've always had the great luxury of never being commercially successful, so we can do what we like."