Accessibility links
For Many Companies, Low Taxes Key To Profits The tax system is broken, President Obama said during his State of the Union address. Some companies pay no taxes at all, he said, while others pay among the highest tax rates in the world. Obama is only the latest government CEO to call for a fairer system. 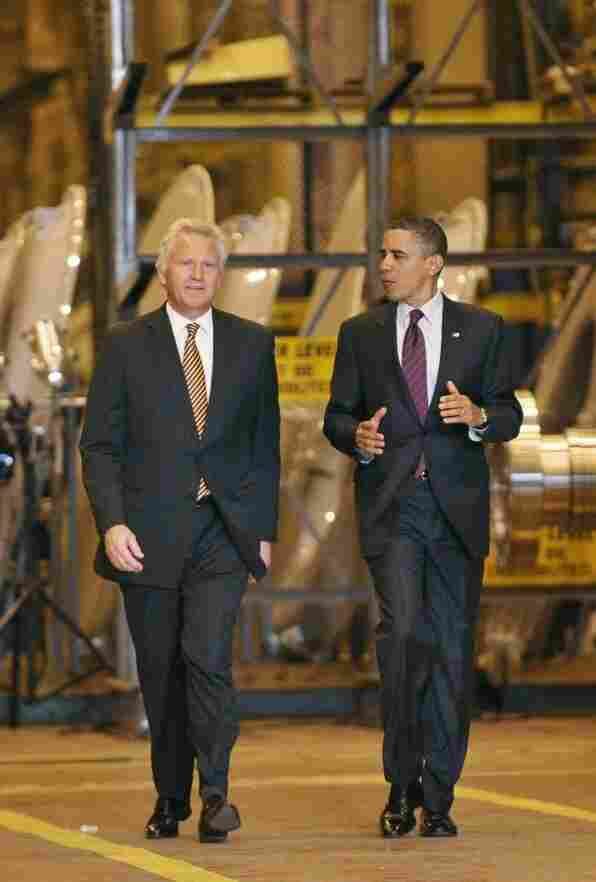 President Obama tours a General Electric plant in in Schenectady, N.Y., with GE Chairman and CEO Jeffrey Immelt on Jan. 21. GE paid 3.6 cents on the dollar in corporate taxes in the past three years. Mandel Ngan/AFP/Getty Images hide caption 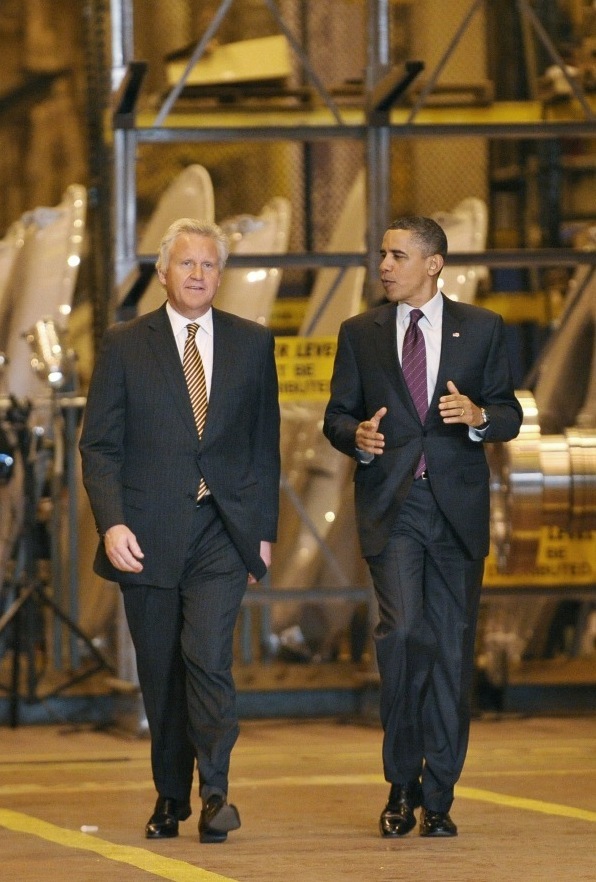 President Obama tours a General Electric plant in in Schenectady, N.Y., with GE Chairman and CEO Jeffrey Immelt on Jan. 21. GE paid 3.6 cents on the dollar in corporate taxes in the past three years.

During his State of the Union address, President Obama said the current tax system is broken.

"Those with accountants or lawyers to work the system can end up paying no taxes at all," he said. "But all the rest are hit with one of the highest corporate tax rates in the world. It makes no sense, and it has to change."

Just how broken is the corporate tax system? Consider the tax rate paid by two of America's biggest companies — Wal-Mart and General Electric. Wal-Mart paid 34 cents in taxes for every dollar of profit it made in the past three years. General Electric paid just 3.6 cents on the dollar.

Welcome to the mysterious world of the corporate income tax, says tax expert Len Burman at Syracuse University. "There are big companies that consider their tax departments to be profit centers," he says.

That's right; instead of concentrating on making light bulbs, power plants or whatnot, companies use the tax system to boost their profits.

How do they do it?

Burman says it helps to be large and have lots of overseas subsidiaries.

"They make money by moving income overseas or in different kinds of activities or adjusting their accounting in such a way that they can pay less taxes than their competitors do," he says.

Winners And Losers Under The Current Tax Code

Low effective tax rates are common in the pharmaceutical and computer equipment industries. But in other industries that are more dependent on domestic customers and services, the opportunities for reducing taxes are more limited.

Tax rates are an average of three years, as presented in the most recent company annual reports.

Companies say their behavior is driven by the fact that corporate taxes in United States are among the highest in the world.

True — but there are other ways to look at it, says Roberton Williams of the Tax Policy Center in Washington.

That's around 25 percent or so.

And when companies work aggressively to minimize their U.S. taxes, they leave billions of dollars in profits parked overseas.

For example, Burman says, think about a company that moves its pharmaceutical plant from New Jersey to Ireland for tax purposes. In addition to the loss of American jobs, there are other costs to consider.

"The company might say, 'Well, it's worth incurring the transportation costs, hauling all the medicines back overseas from Ireland to the U.S., because of all the money they save on taxes, but that's just a pure waste."

Pharmaceutical and biotech companies pay some of the lowest tax rates around — in the low single digits, according to research from New York University.

"Right now, we have the tax code that provides incentives for you to do this type of behavior or that type of behavior," says Rachelle Bernstein, the tax counsel for the National Retail Federation. "The better way to do it [is to] lower the rates, broaden the base and let businesses make the right decisions without the tax code in the way."

There are big companies that consider their tax departments to be profit centers.

Congress has showered the pharmaceutical and biotech industries with tax write-offs for research and development. Meanwhile, energy companies get tax breaks for exploration.

But retailers and many companies that don't do much business overseas tend to get very few write-offs.

Obama didn't lay out a detailed plan for reforming the corporate tax in his State of the Union speech.

He said only that he wants to weed out the loopholes so that overall rates can be lower for everyone while raising the same amount of money.

Yet Another Try At Tax Overhaul

There is a precedent for the kind of tax overhaul he's proposing.

Back in 1986, President Reagan reached a deal with Congress that cleaned out many loopholes.

"There was a turning point when a bunch of corporate CEOs came to Washington and said, 'Well, we really like this proposal even though you're going to hammer our companies because we personally are going to pay a whole lot less in income tax.' "

But in the current fiscal environment, there may not be enough money to buy off CEOs with yet another round of tax cuts.