Accessibility links
In Haiti, Cellphones Serve As Debit Cards The systems have the potential to let Haitians receive remittances from abroad, send cash to relatives across the country, buy groceries or pay for a bus ride with a few taps of their fingers. 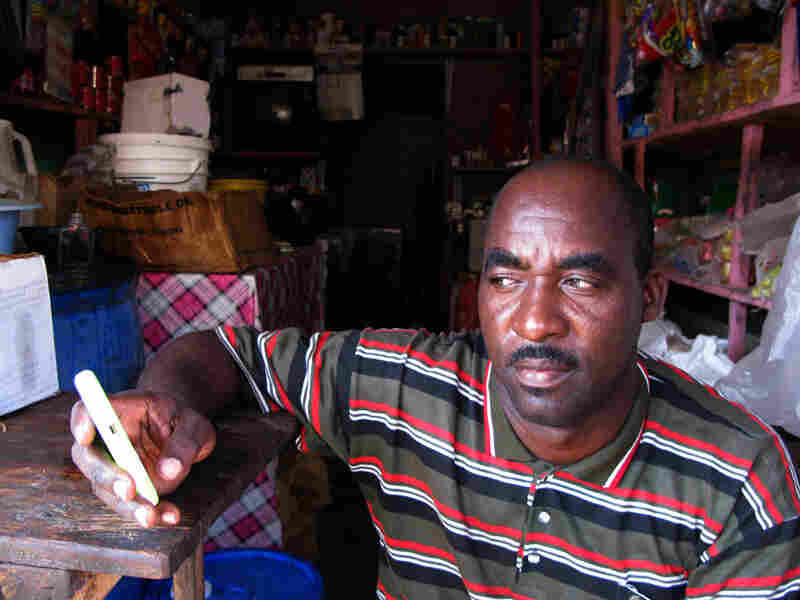 Larousse Dorcent runs a small grocery store out of a shipping container in the Haitian port city of Saint Marc. In December, Dorcent started accepting payments at his shop by cell phone. Jason Beaubien/NPR hide caption 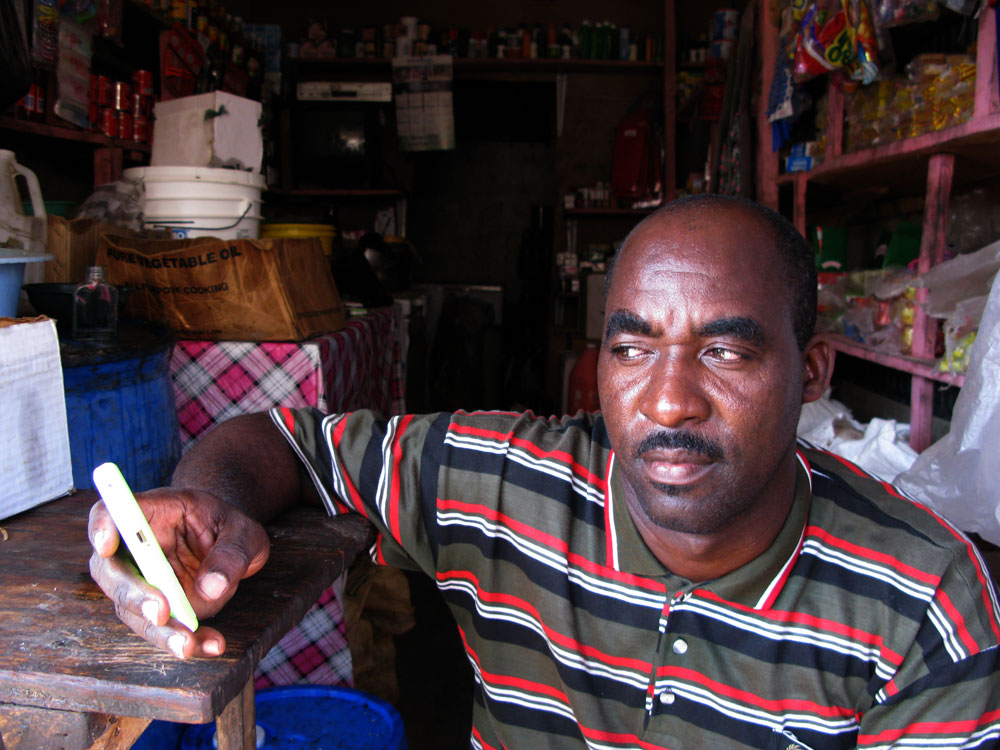 Larousse Dorcent runs a small grocery store out of a shipping container in the Haitian port city of Saint Marc. In December, Dorcent started accepting payments at his shop by cell phone.

The past year in Haiti has been marked by the slow pace of the earthquake recovery. But the poorest nation in the hemisphere is moving quickly on something else — setting up "mobile money" networks to allow cell phones to serve as debit cards.

The systems have the potential to allow Haitians to receive remittances from abroad, send cash to relatives across town or across the country, buy groceries and even pay for a bus ride all with a few taps on their cell phones.

Larousse Dorcent runs a small grocery store from a shipping container in a dusty slum above the Haitian port city of Saint Marc. Pigs and chickens wander freely through the neighborhood. It looks like a place that technology forgot — except that for the past two months, customers at Dorcent's shop have been able to pay by cell phone.

Dorcent punches a code into his own phone. Instantly he gets a message showing that he has 41,000 gourdes, or just over $1,000, in his account.

Dorcent says he likes that customers can pay from their phones straight to his.

"The first good reason I can give is when you're handling a lot of liquid cash, it's also being handled by a whole lot of other people throughout the country," he says. "And these days, with cholera, it's safer to not be in contact with currency that's making its way throughout the country."

What's happening here in Saint Marc is a test program for the T-Cash service that is being launched by the phone company Voila.

Voila is working with Mercy Corps to distribute aid to earthquake victims. Saint Marc is several hours' drive north of Port-au-Prince, and it wasn't heavily damaged in the quake. But according to the mayor, 30,000 earthquake survivors moved into this small city in the weeks after the disaster.

"What we're doing is we give nine months of food rations," says Andrew Lucas, manager of the assistance program for Mercy Corps in Saint Marc. "Each month, each family will receive around $40 in credit to buy four products. They can buy rice, oil, corn flour or beans."

Food aid like this is not distributed at all in the severely damaged capital. The goal here is to encourage people to migrate out of Port-au-Prince and, at the same time, to help the families that have taken them in.

Lucas says Mercy Corps used to hand out printed food vouchers. But now they're giving each family a cheap cell phone loaded with $40 worth of T-cash.

"For us, actually, the vouchers are difficult. It takes a lot of time to distribute them. We have to print them somewhere, distribute them each month, collect them," Lucas says.

But with T-cash, they can send out food aid to 300 families with the click of a keystroke. The system can also be used to pay employees, which, in Haiti, can involve huge stacks of currency or checks that employees then need to stand in long lines to cash.

Greta Greathouse is with the U.S. Agency for International Development (USAID), which is putting up millions of dollars to help get these systems going.

"We wanted it kick-started now," she says. "We didn't want to wait for three years."

Only 10 percent of Haitians have bank accounts. Mobile money has the potential to offer banking-type services — savings accounts, wire transfers, itemized account records — to millions of Haitians who don't have them.

"It costs less," she says. "The costs are less than going to the bank, and that's before you add in the cost of transport to go to the bank and the time it takes you. And it's safe."

"I envision a time when every Haitian will figure out that he'd prefer getting paid this way than any other method," Liautaud says.

Haitians are already accustomed to buying cell-phone minutes electronically from vendors on the street. A vendor uses his phone to put extra time on your phone. You instantly get a message on your handset showing your new balance. Then you can re-send that cell phone credit again via text message to someone else.

Liautaud says this was an important precursor to mobile money.

"It's an introduction not only to the technology but to the principle that I can send you something electronically that has value," he says.

A Piece Of The Pie

The cell phone companies stand to get a small slice — less than 1 percent of every financial transaction. Just in the money transfer business alone, there are huge opportunities. Haitians living abroad send roughly $2 billion a year to the island. Companies such as Western Union charge up to a 10 percent commission for that service. Viola's T-Cash system allows transfers of up to $250 for roughly 75 cents.

One major problem facing the migration of cash onto phones in Haiti is that Voila and its main rival Digicel are both rolling out separate mobile money programs, and so far the systems can't interact.

Voila's system is now up and running. Liautaud says already there are 300 shops where customers can put cash on or take cash off their phone accounts. By mid-February, Voila plans to have 1,500 merchants accepting payments by cell phone all across Haiti.