Accessibility links
Rising Food Prices Can Topple Governments, Too Political unrest has broken out in Tunisia, Yemen, Egypt and other Arab countries. Social media and governmental policies are getting most of the credit for spurring the turmoil, but there's another factor at play. 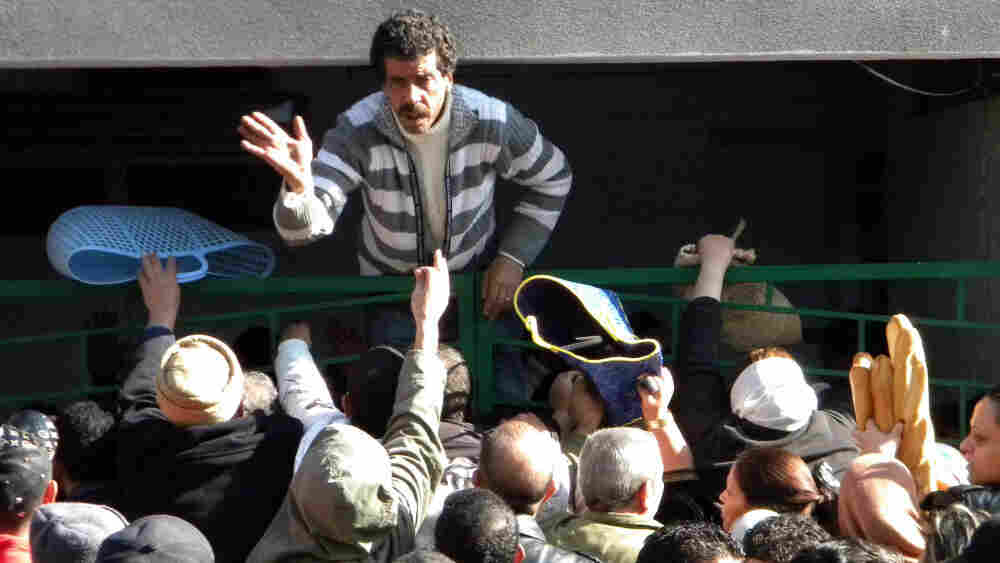 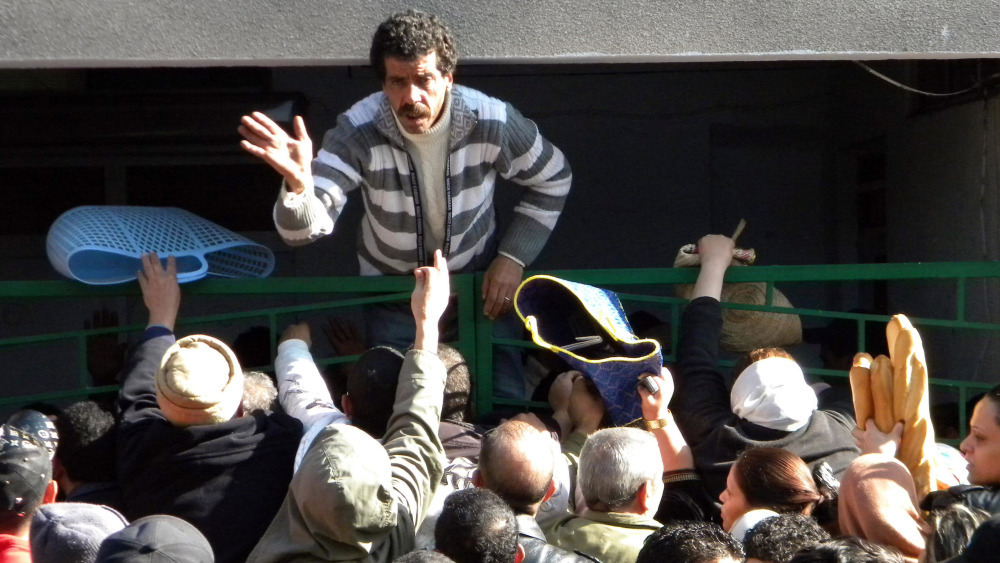 Tunisians wait outside a bakery to buy bread in Tunis earlier this month.

Political unrest has broken out in Tunisia, Yemen, Egypt and other Arab countries. Social media and governmental policies are getting most of the credit for spurring the turmoil, but there's another factor at play.

Many of the people protesting are also angry about dramatic price hikes for basic foodstuffs, such as rice, cereals, cooking oil and sugar.

Compared to average food prices between 2002 and 2004 (valued below at 100), the global price of food has been rising in the years since.

The Food and Agriculture Organization of the United Nations says its global food price index is at a record high, above even where it stood during the last food crisis three years ago. In early 2008, rising prices caused riots in dozens of countries — several of which are now seeing uprisings once again.

The problem is one of the top concerns among economists, political leaders and corporate executives at their annual gathering in Davos, Switzerland. At the event, which ends Sunday, participants expressed worries that rising crop and meat prices will further contribute to political instability in developing and impoverished countries.

Rising prices are "leading to riots, demonstrations and political instability," New York University economics professor Nouriel Roubini said during a panel discussion. "It's really something that can topple regimes, as we have seen in the Middle East."

And, the Davos experts warn, higher prices could hurt consumers and derail the economic recoveries under way in wealthier countries.

What Causes Food Prices To Rise

In large part, the food-price crisis reflects the simple law of supply and demand. The supply of food has been diminished by bad weather in many crucial crop-growing areas of the world. Russia, Ukraine and Argentina have had severe droughts, while Pakistan and Australia have had massive flooding.

At the same time, demand for food has been rising as people in fast-developing countries, such as India and China, have been buying more groceries.

In addition, production and transportation costs have been driven up by the rising price of oil. Other factors involve currency fluctuations, food trade policies and financial speculation in commodities markets. Energy policy also plays a role, because ethanol makers are using more corn to produce fuel.

In the United States, these factors have not significantly pushed up consumer prices — yet. The USDA released a new study that showed U.S. grocery store prices rose less than 1 percent last year.

The reason for the tame price environment in this country is that the cost of food itself is a relatively small part of what U.S. consumers pay at the cash register, according to Homi Kharas, senior fellow for the Global Economy and Development program at the Brookings Institution, a Washington-based think tank.

He says that when a U.S. consumer buys a box of cereal or a cup of Starbucks coffee, she is mostly paying for the packaging, marketing and attractive store fixtures. So the shopper is not greatly affected by the underlying commodity price the way poorer people are in other countries when they buy, say, a simple sack of rice.

"Take corn flakes," Kharas says. "Very little of the price of the box reflects the corn inside."

Also, U.S. food companies often lock in lower prices by using futures contracts, so the price of ingredients they are using today may have been set a year ago, before bad weather drove up crop prices, he says.

Still, the impact of higher grain, dairy and meat prices eventually will filter down to U.S. consumers, he says. The USDA is predicting grocery prices to rise between 2 and 3 percent this year.

Around the world, political leaders are looking for ways to slow price increases. In some poorer countries, government officials already have imposed price caps.

In the long run, economists say the only real solution will be to increase the supply of affordable food. They are urging governments in poorer countries to invest in roads and irrigation to support local agriculture and to reduce agricultural waste. More controversial proposals involve increasing the use of genetically modified seeds, controlling population and opening up more markets to global trade.