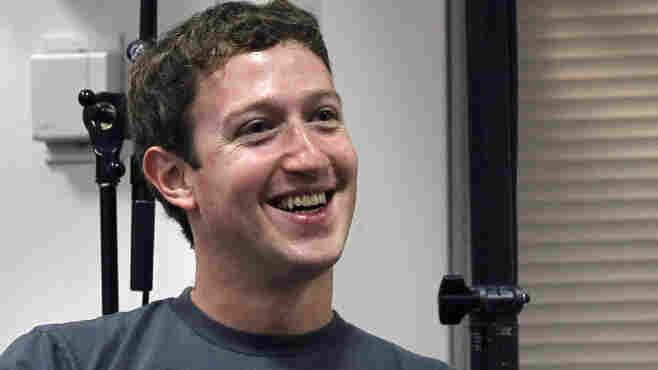 Say what you will about Saturday Night Live, the declaring dead of which has become a national pastime: now and then, they still catch a big fish.

Last night, it was Facebook founder Mark Zuckerberg, who showed up during host Jesse Eisenberg's monologue to come face-to-face with the actor, who was just nominated for an Oscar for playing Zuckerberg in The Social Network. Also in the picture was Andy Samberg, who plays Zuckerberg for SNL in a way he amusingly admits is pretty perfunctory, with the central role going to his hoodie.

Getting Zuckerberg and Eisenberg together for the first time (definitely the first time in public, and the first time period, as far as anyone knows) is something many, many outlets would have loved to do. But this is where it happened.

For as much as the quality of the appearance actually matters — which is to say, "not much" — Zuckerberg was awkward, smiling a little oddly at times. But honestly, Eisenberg wasn't especially comfortable in this format himself. If the appearance operated as a comment on the fairness of the movie version of Zuckerberg invented by screenwriter Aaron Sorkin, it did so by demonstrating that while the real Zuckerberg's awkwardness is obviously real, it contains an element of genuine attempts at affability and silliness, where the movie Zuckerberg is almost uniformly surly and flat.

But in the end, this kind of thing generally reflects well on everyone, and it's probably the smartest thing Zuckerberg has done, publicity-wise, in quite some time.