Accessibility links
McCain Calls Pentagon's 'Don't Ask' Study Flawed The Arizona Republican, who has helped block debate on the issue on the Senate floor, told a Senate hearing that repealing the ban may be premature. McCain, a decorated war veteran, also said it would be dangerous to allow gays to serve openly in the military during wartime. 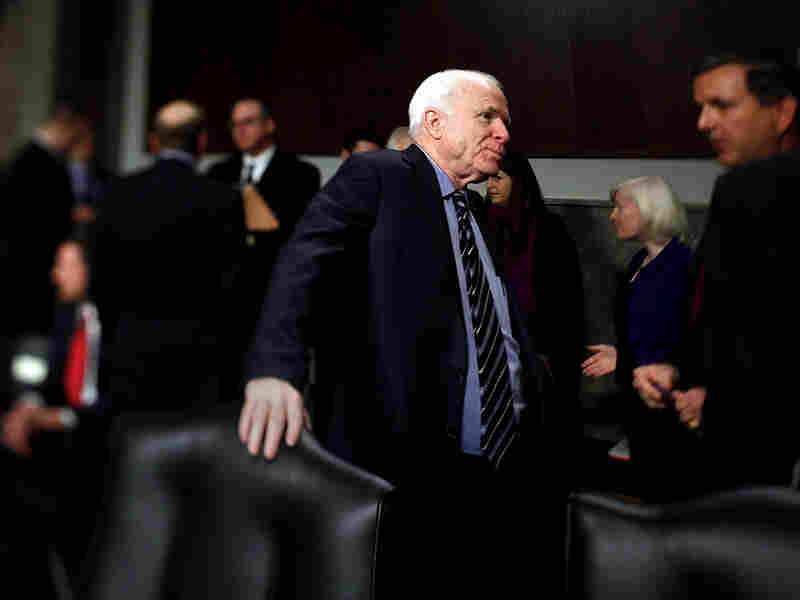 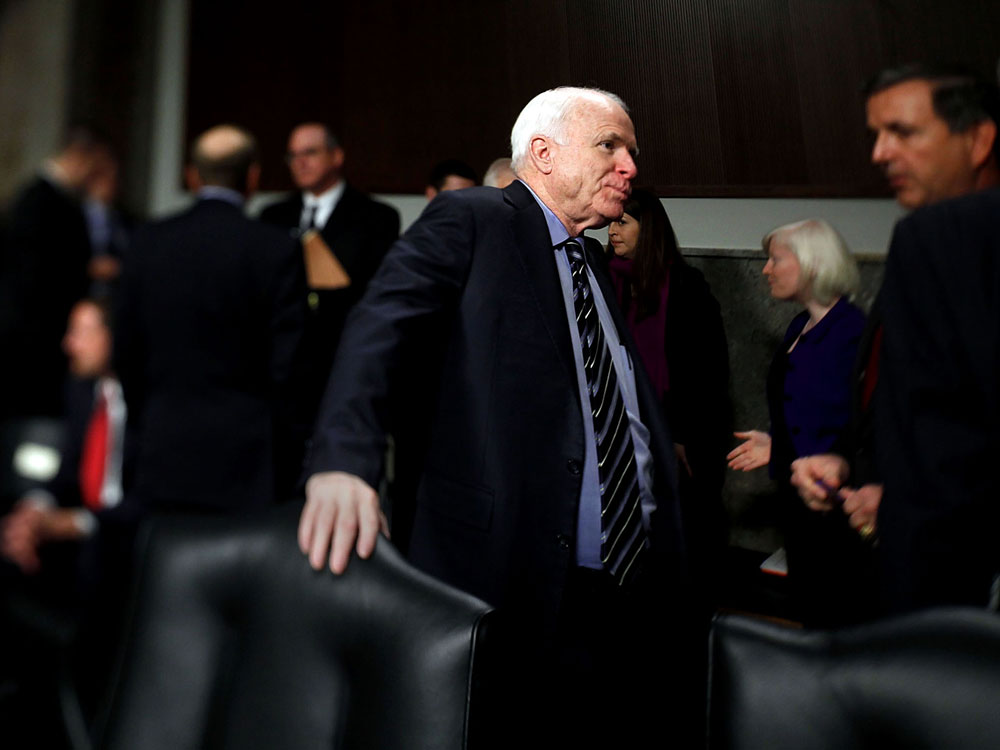 Sen. John McCain stands during a break at Thursday's hearing on the military's "don't ask, don't tell" policy. The Arizona Republican is the ranking member of the Senate Armed Services Committee.

Sen. John McCain rejected a Pentagon study on "don't ask, don't tell" as flawed and said it would be dangerous to allow gays to serve openly in the military during a time of war.

"I am not saying this law should never change. I am simply saying that it may be premature to make such a change at this time and in this manner," the Arizona Republican told Defense Secretary Robert Gates and Joint Chiefs Chairman Adm. Mike Mullen at a Senate hearing Thursday.

McCain, a decorated war veteran who has helped block debate on the issue on the Senate floor, said he was concerned that the majority of troops surveyed in Marine Corps and Army combat units thought repealing the 17-year-old law would adversely affect unit cohesion.

He also said the study failed to address a critical question.

What I want to know, and what it is the Congress' duty to determine, is not can our armed forces implement a repeal of this law, but whether the law should be repealed.

"What I want to know, and what it is the Congress' duty to determine, is not can our armed forces implement a repeal of this law, but whether the law should be repealed," said McCain, the ranking member of the Senate Armed Services Committee. "Unfortunately, that key issue was not the focus of this study. It is, however, the fundamental question that must be answered by Congress — not by the president or the courts, but by Congress."

Mullen countered that wartime is an ideal time for repeal, and that Congress should act before the courts do. "War does not stifle change; it demands it," he said. "It does not make it harder; it facilitates it."

Gates underscored the point, saying, "It is my worry about the unpredictability with the courts ... that gives me a sense of urgency about this."

Defense Department General Counsel Jeh Johnson, co-author of the Pentagon study, said he would continue to defend the law until such time as it is changed by Congress. "It is my job to enforce, defend the law as the Congress gives it to us," he said, responding to a question from Sen. Roger Wicker (R-MS). 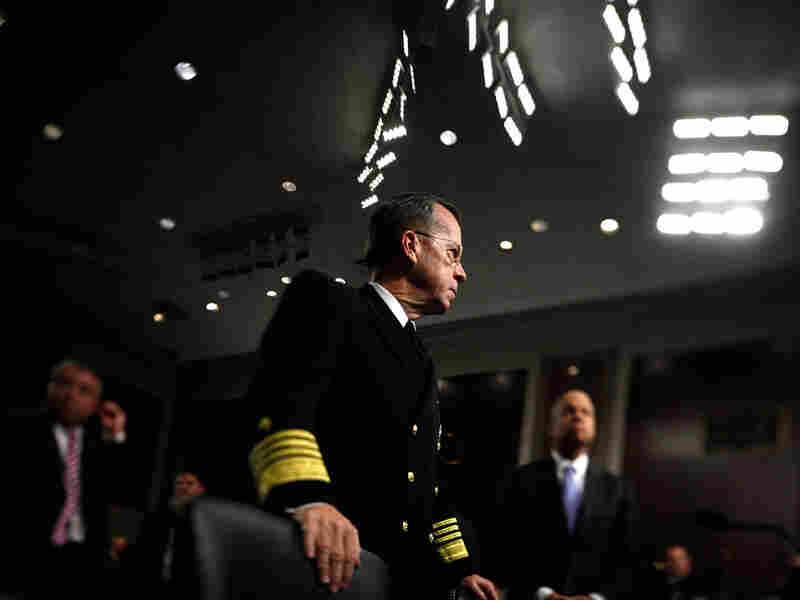 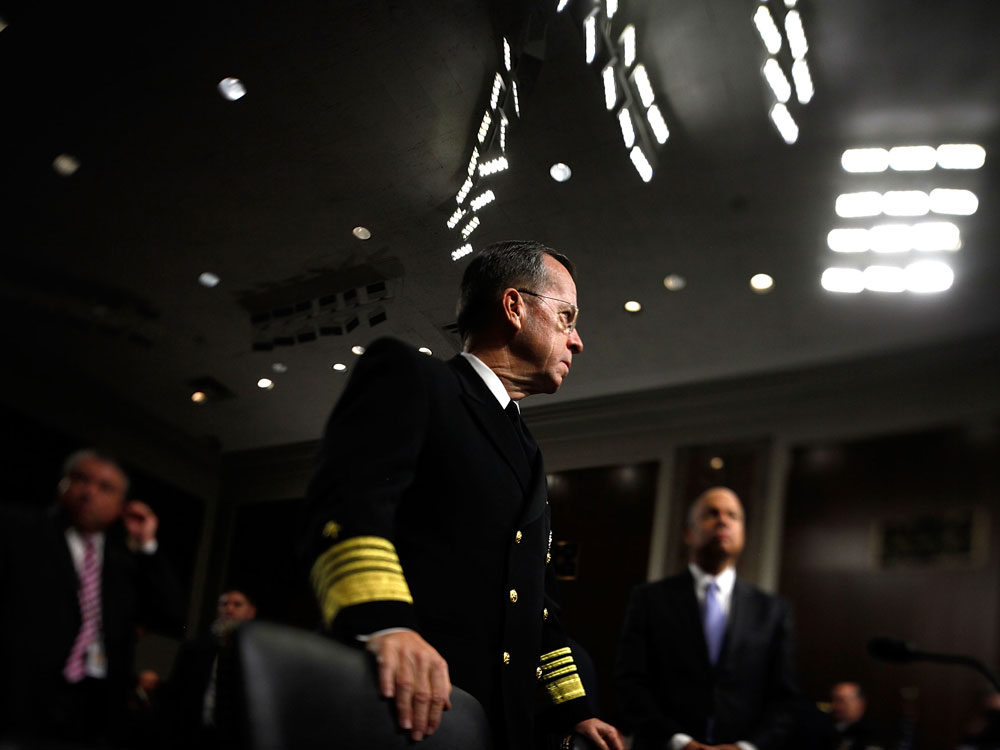 In his opening statement, Mullen seemed to issue a direct challenge to McCain, who has suggested that the opinion of the Joint Chiefs chairman carries less weight because he doesn't directly lead troops.

"For more than 40 years, I have made decisions that affected and even risked the lives of young men and women," Mullen said. "You do not have to agree with me on this issue. But don't think for one moment that I haven't carefully considered the impact of the advice I give on those who will have to live with the decisions that advice informs."

The Pentagon study released this week concluded that the overwhelming majority of U.S. troops were not against seeing don't ask repealed.

Don't think for one moment that I haven't carefully considered the impact of the advice I give on those who will have to live with the decisions that advice informs.

The first-of-its-kind survey found that two-thirds of the overall military force predicted that allowing gays to serve openly would have little impact on the military's ability to fight. But among those who did care, most were troops performing combat arms duties. Nearly 60 percent of those in the Marine Corps and in Army combat units said they thought repealing the law would hurt their units on the battlefield.

Mullen said the survey's results helped him square his personal and professional opinions.

"My personal views remain unchanged — I am convinced that the repeal of don't ask, don't tell is the right thing to do," he told the committee.

He said the survey, along with an examination of how gays have been integrated into the militaries in other nations, led him to believe that ending the policy would result in "less turbulence, even in the combat arms world, than some predict."

According to the Palm Center, a University of California, Santa Barbara-based think tank, 25 countries allowed gays to serve openly as of June 2009. Those countries include Canada, France, Germany, Israel, New Zealand, South Africa and the United Kingdom.

The U.S. ban, adopted in 1993 as a compromise, requires the military to expel gays and lesbians who are open about their sexual orientation. According to the Pentagon, about 13,000 have been discharged under the law.

Gates To Senate: End 'Don't Ask' Before Courts Do

Sen. Evan Bayh (D-IN) asked Gates whether some of the same concerns about repealing "don't ask" were raised when military units were racially integrated some six decades ago.

"We did have problems, racial problems inside the armed forces for a number of years after that," the defense secretary replied. "Ultimately, through discipline and training and professionalism, I think they've largely been eliminated."

Bayh also asked Gen. Carter Ham, the study's other co-author, if it was likely that gay Americans served at Valley Forge, Gettysburg and Normandy Beach.

Marine Gen. James Cartwright, the No. 2 officer on the Joint Chiefs of Staff, said in an interview that if Congress fails to act the military could handle an abrupt about-face mandated by the courts.

He, like the other Pentagon leaders, said that is by far the second choice and would be disruptive for forces currently cycling through the military's tightly planned rotation for wartime deployment.

"Bringing this into force quickly means that we have to do some of this in the battlefield. Probably doable, but it's a bigger challenge than we really want to have to take," Cartwright said.

Cartwright and the military chiefs of each service will testify before the same Senate panel on Friday. The focus will be on Marine Commandant Gen. James Amos because of the survey results showing high opposition to repeal among Marine combat troops.

NPR's Rachel Martin contributed to this report, which contains material from The Associated Press