Accessibility links
Could Egypt's ElBaradei Be A Hero Of The Revolution? Mohammed ElBaradei, a Nobel laureate for his work on arms control, has emerged as a leading player in the Egyptian revolution, anointed as a consensus figure whom opponents of President Hosni Mubarak can support and rally behind. But analysts say his role longer term is unclear. 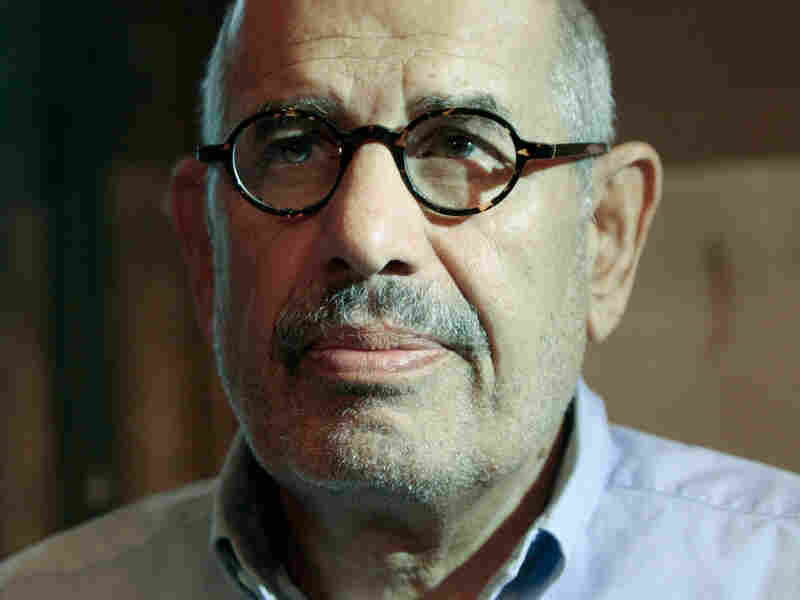 Mohammed ElBaradei, the Nobel Peace Prize winner and former chief of the IAEA, is seen here at a meeting marking the first year of his campaign to press for changes within Egyptian politics, in Cairo, Sept. 6, 2010. ElBaradei brought together a coalition of young activists and opposition groups to mark his first year in Egyptian politics. Amr Nabil/AP hide caption

On Sunday, Mohammed ElBaradei emerged as a leading player in the Egyptian revolution, anointed as a consensus figure whom opponents of President Hosni Mubarak can support and rally behind.

"He's sort of the anti-Mubarak right now," says Kenneth C. Brill, president of the Fund for Peace and former director of the State Department's Office of Egyptian Affairs. "Neither he nor his family are tied up with the regime in any way."

ElBaradei won a Nobel Peace Prize in 2005 as director general of the International Atomic Energy Agency. Following his retirement, he returned to Egypt last year and went into politics, but he failed to catch fire as an opposition leader.

In the current maelstrom, however, he has been recognized by secularists and the Islamist Muslim Brotherhood, which has long been the primary opposition force, as a voice who can lead the call for Mubarak to step down — and garner support from the international community.

Given the flux of events, it's far from clear what role ElBaradei will ultimately play. Geoffrey Aronson, research director at the Foundation for Middle East Peace in Washington, cautions that ElBaradei may be serving as "the pretty face" — holding the bullhorn at rallies but perhaps not acting as the ultimate arbiter behind the scenes.

"It would be a mistake to infer that because he is the face that we see, that he in fact holds the power," Aronson says. "You've got other institutions that will remain very probably still more powerful — the army and the military services and the Islamists."

Native Son Who Made Good

It would be a mistake to infer that because he is the face that we see, that he in fact holds the power.

ElBaradei, the son of a prominent Cairo attorney, entered his country's foreign service after completing his own legal education in Egypt and New York. He joined the IAEA in 1984, becoming its general director in 1997.

In that role, he sometimes battled with the Bush administration, challenging its claims about the existence of an Iraqi nuclear weapons program. Just before the U.S. invaded Iraq, he told the U.N. Security Council that documents the administration had produced portraying Iraq as trying to buy uranium from Niger were "in fact not authentic."

The Bush administration was unsuccessful in its efforts to block ElBaradei from winning a third term as chief of the IAEA in 2005. That year, he and the agency were awarded the Nobel Peace Prize.

"You're talking about somebody who had status because of the Nobel Prize he won and also because of standing up to the U.S.," says Anthony H. Cordesman, a former Defense Department official who is now at the Center for Strategic and International Studies.

A Threat As An Outsider

Because of his prominence, ElBaradei sought, after retiring from IAEA, to position himself as an alternative to Mubarak. He floated the idea of a presidential run and enjoyed some popular support at home, as well as laudatory profiles in Western media outlets.

But ElBaradei was unable to build a movement that could stand as anything like a real threat to Mubarak. Cordesman points out that it has long been incredibly difficult to try to set up any kind of opposition political structure in Egypt. But to the extent that the field was ripe for ElBaradei to do so, he did not manage to press his advantages.

Rather than challenge Mubarak, ElBaradei called for a boycott of the parliamentary elections last fall, based on justifiable concern that they would be rigged.

And he failed to perform the kind of spadework necessary to build an opposition party.

"He would not get involved in the dirty business of building a movement," says Marina Ottoway, director of the Middle East Program at the Carnegie Endowment for International Peace. "He would put out a statement, and expect other people to do it for him."

Ottoway says that some Egyptians had expressed disappointment in ElBaradei prior to the current upheaval. Once it started, he received some criticism because he was back in his longtime home of Vienna until two days of protests had already passed.

ElBaradei is a fluke to begin with. When hopes began to surround him a few months ago, it was because there was no one else.

"ElBaradei is a fluke to begin with," Ottoway says. "When hopes began to surround him a few months ago, it was because there was no one else."

A Man With Clean Hands

But what appeared to be ElBaradei's weaknesses may be turning into strengths.

Brill, who worked closely with ElBaradei as ambassador to the IAEA from 2001 to 2004, points out that ElBaradei bears none of the taint that would come from having been a player in Egyptian politics over the decades.

"He is someone who has demonstrated some success in projecting an image of reform within the country," Brill says.

On the other hand, what is appealing about him as an outside figure during the moment of revolution may not serve ElBaradei well over the long haul, should he come play a prominent role in a new government.

For now, he enjoys clean hands due to his lack of ties to the military or political elite. But ElBaradei has not lived full time in Egypt for decades. A deep understanding of the country's domestic politics and how to pull on the levers of power will be necessary if and when it comes time for an outsider to start governing.

"There are only two institutions with organizational capabilities in Egypt, the military and Mukhabarat — which are now in complete control of the new government and appear unlikely to go fish ElBaradei from the street — and the Muslim Brotherhood," says Camille Pecastaing, a professor of Middle East studies at the Johns Hopkins School of Advanced International Studies. "ElBaradei can use his fame to get interviews and make himself visible, but if he is to go anywhere near power, he will have to be carried by an institution or group or structure that actually wields power."

Cordesman, the CSIS analyst, cautions that many revolutions have ended up bringing new people to power — only to see them swept out within a year.

"Popular uprisings sometimes produce a new leader with virtually no warning — someone who wasn't in the power structure before, someone who isn't known or predictable," Cordesman says. "But, historically, more times than not, that initial choice gives way to somebody who can pull the strings of power more effectively over time."