Accessibility links
Afghan Villagers Return Home To Devastation The U.S. decided that Tarook Kalacha was so completely wired with bombs that the only way to save the village was to demolish it with airstrikes. Villagers say whether the U.S. ends up a friend or foe will depend on the rebuilding of their homes. 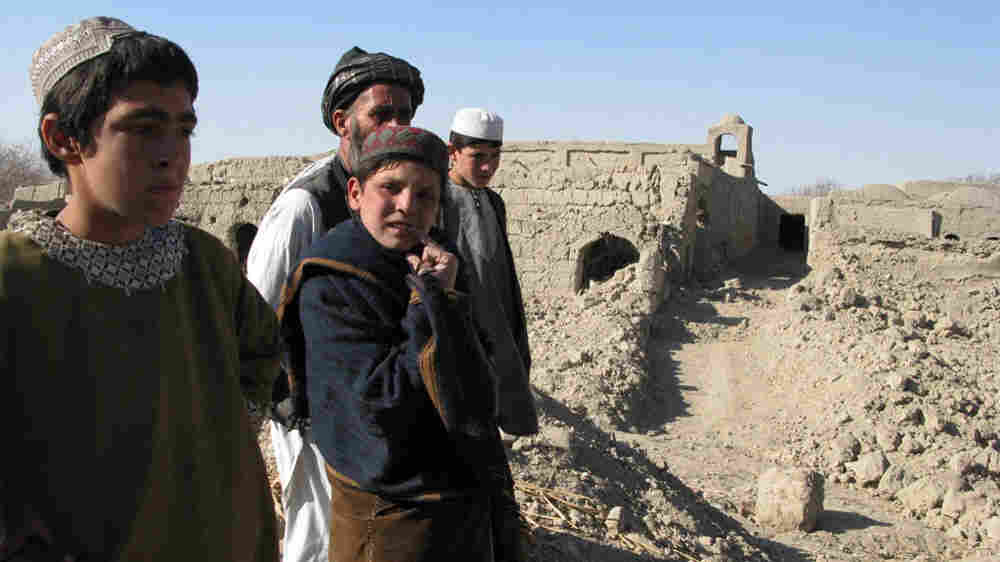 Children stand on the ruined wall of a house in a hamlet in Lower Khasro, Arghandab. Quil Lawrence/NPR hide caption 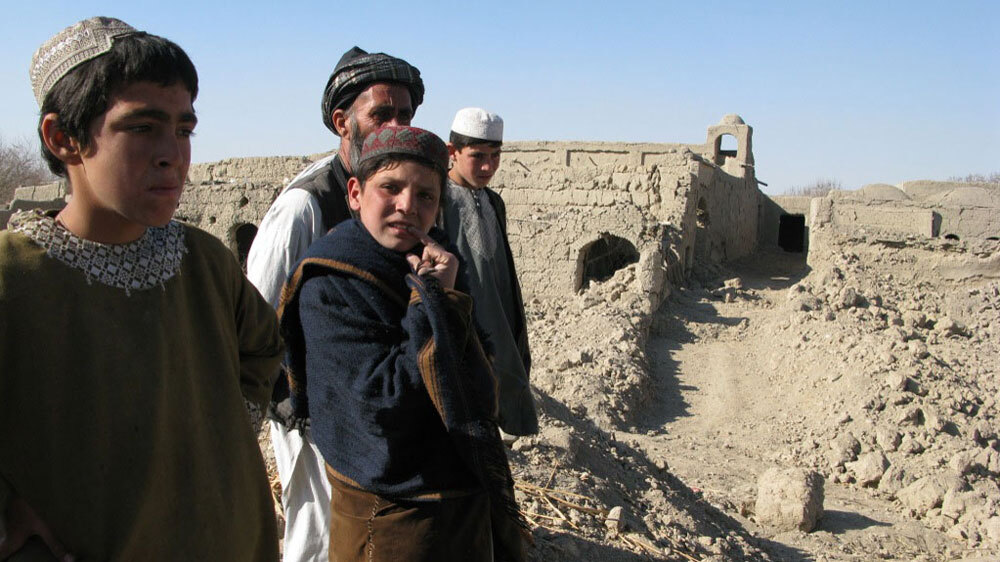 Children stand on the ruined wall of a house in a hamlet in Lower Khasro, Arghandab.

This summer, U.S. troops surged into southern Afghanistan, pushing into Taliban territory and setting off some of the fiercest fighting since the war began.

In the Arghandab River Valley, U.S. soldiers faced Taliban snipers and a plague of landmines and booby-traps that claimed hundreds of American and Afghan lives.

When U.S. troops fought in Arghandab, they had to unlearn one of their most basic instincts: When the took fire, they had to remember not to hit the dirt for cover. Arghandab was so full of homemade land mines — what the military calls IEDs — that lying down on the ground was more dangerous than standing up amid the bullets.

But Arghandab went quiet a couple of months ago, either because the U.S. troop surge finally drove the Taliban out or because the Taliban left, as the dense foliage they used as cover fell away for the winter.

Whatever the reason, Afghan police officer Khan Muhammad considered it safe enough to go home. When a drive to the village of Tarook Kalacha was proposed, he jumped at the chance to visit the house he hadn't seen for two years — or what's left of it.

A few months ago, Khan Muhammad says, the Americans decided that Tarook Kalacha was so completely wired with bombs that the only way to save the village was to demolish it with airstrikes.

The policeman says he hasn't had a chance to claim any compensation for his damaged house because the Americans insist he must come to the village to get it. He was too busy working to go and also too afraid.

Passing through the orchards, it's not hard to see why.

Khan Muhammad points out places along the road where bombs were defused, or where they claimed the lives of comrades, or where he himself was wounded. The low mud walls that Afghans use as grape arbors make perfect cover for snipers. When leaves and fruit cover the trees, the road may as well be a tunnel, a blind alley for a small army hiding in the orchard.

Khan Muhammad says it's not dangerous now, but he still asked five fellow cops to come along. He quotes the Pashtun proverb: "Even if your enemy is a jackal, prepare as if he were a lion."

But it looks like the Taliban fighters are gone, and the villagers are starting to pick up the pieces.

Half a mile outside Tarook Kalacha, a group of men use a two-man handsaw to make firewood out of a toppled mulberry tree that looks a hundred years old. American choppers fly high over a dusty vacant lot that was once an orchard. 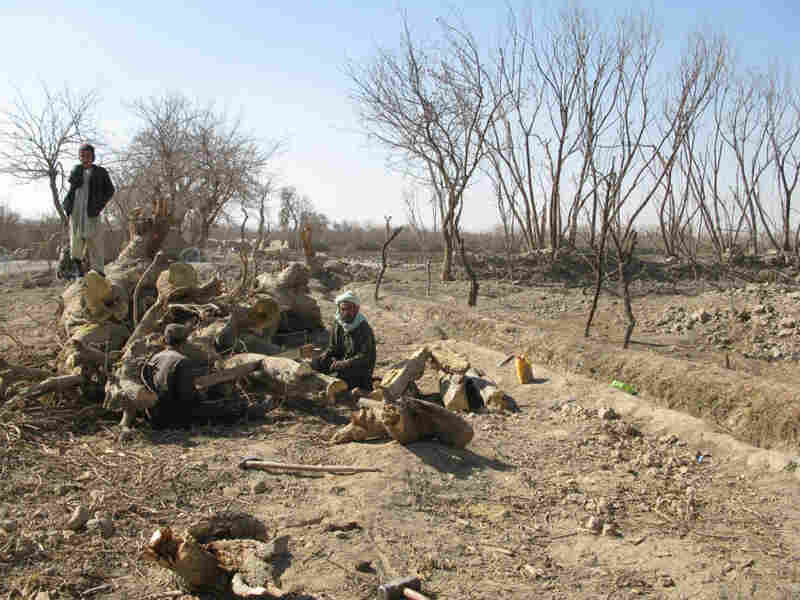 Villagers cut up a mulberry tree for firewood after the U.S. Army bombarded and bulldozed a section of their orchard. The Army says there were so many landmines in this part of Arghandab that they had to use air strikes to clear it. Quil Lawrence/NPR hide caption 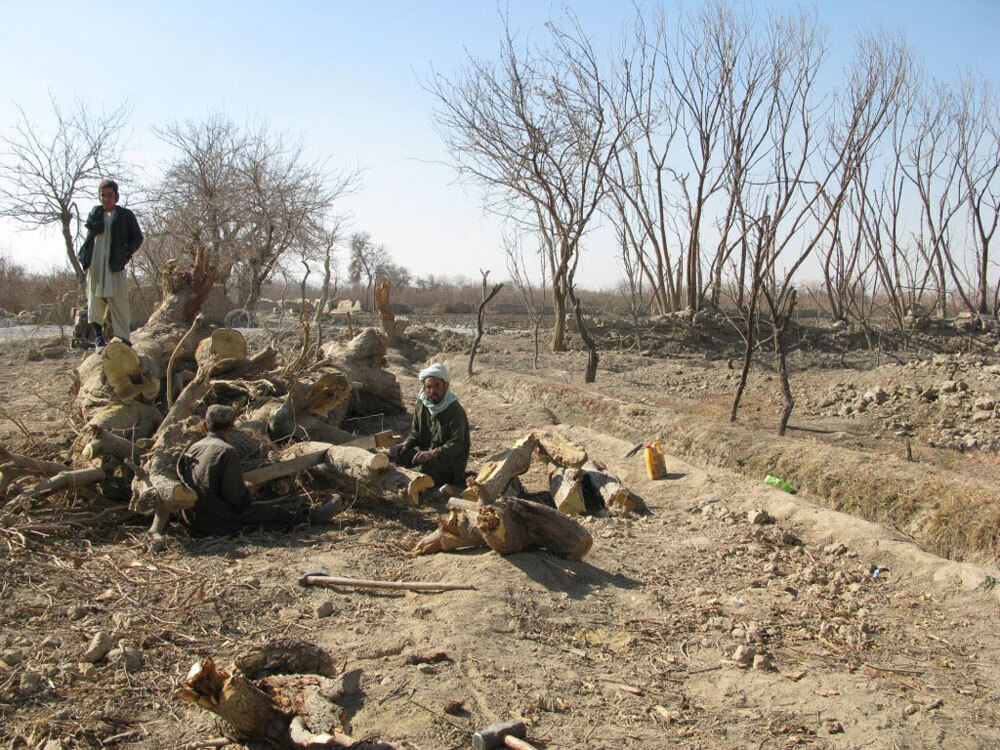 Villagers cut up a mulberry tree for firewood after the U.S. Army bombarded and bulldozed a section of their orchard. The Army says there were so many landmines in this part of Arghandab that they had to use air strikes to clear it.

Hajji Rozi Muhammad, the white-haired landowner, says there were 200 pomegranate trees here until the Americans bombed and bulldozed the orchard.

It's clear this was a battlefield. Muhammad points to bullet and shrapnel scars on the surviving trees. His house in Tarook Kalacha also was destroyed; in fact the Americans have built a base right on top of where it sat, he says.

"Of course, I'm very disappointed and very angry," says Muhammad. "This was the income of my family. We were just feeding our kids with that, our family with that."

He says he's not sure if the Americans had to bomb the area; he thinks with all of America's technology there must have been a way to remove the bombs without flattening the orchard. He's not sure whether he should blame the Americans or the Taliban for the destruction.

Muhammad gets in the car with the policeman and drives a short distance to what used to be a hamlet of 30 or 40 houses, Tarook Kalacha. It's a vast empty lot full of dust as dry as talcum powder. U.S. soldiers have built a small fort in the middle of it.

But reconstruction is under way; masons are building the stone foundation for a new mosque.

Looking To The Future

When asked about the demolition of the village, Pat McGuigan, the U.S. Army captain in charge of reconstruction in the area, says the whole point was to make it safe for Afghans to return and work the orchards again. He says mass production of "HME" — or homemade explosives — was going on in the village. 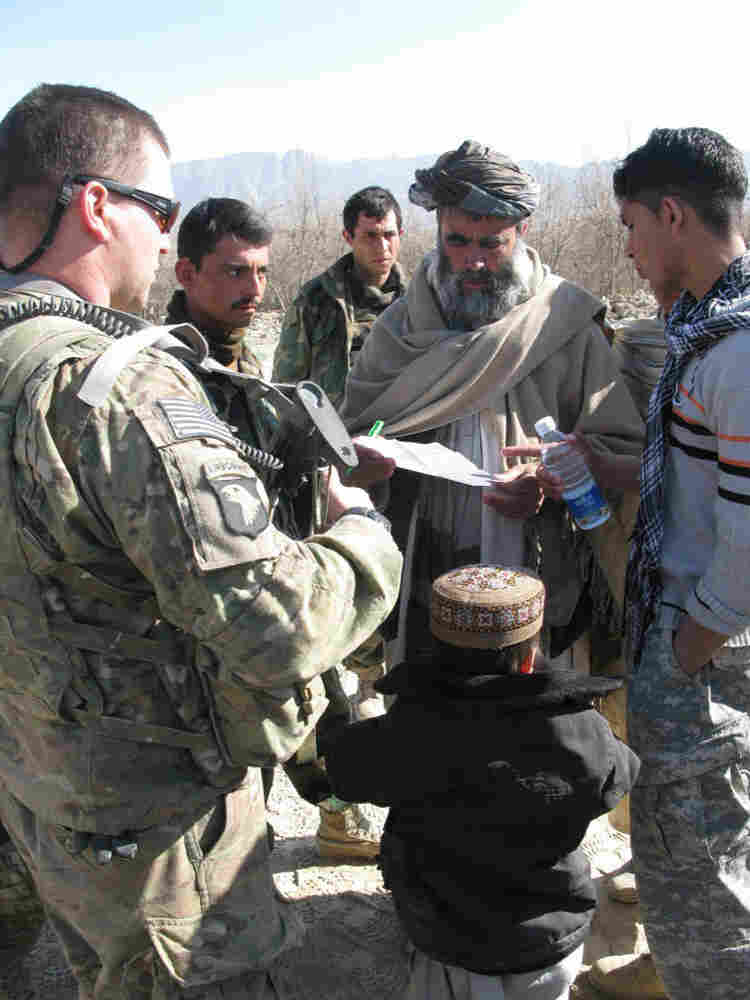 U.S. Army Capt. Pat McGuigan stands with a land-owner from Tarook Kalacha who has a hand-drawn plan of his house the Americans have promised to rebuild. Quil Lawrence/NPR hide caption

"The first option was not dropping bombs," McGuigan says. "That is not the course of action one. We tried to get down into the village. ... Every time we would get about 400 meters north of here … we'd be met by a colossal barrage of fire from the Taliban, or we would step on an IED and a soldier would lose his legs or his life."

He says village elders couldn't go home either. Now many are back to meet McGuigan with hand-drawn plans to rebuild their houses based on aerial photos the Army gave them.

McGuigan says fair compensation will be paid for the houses, the lost fruit harvest and rent for the land the base is on now. No one here has claimed that any civilians died in the bombing; everyone had already fled the fighting.

McGuigan says the village elders said they would come back only if the base stays to protect them.

But the men seem more nervous than excited, perhaps shell-shocked from looking at the dust that once was their homes. Most think the Taliban will have a hard time coming back here in the spring, but they've just heard the news that the elder they put in charge of reconstruction, Dad Karim, was assassinated in Kandahar city, after many threatening letters from the Taliban.

On the way back to town, Khan Muhammad, the police officer, finally gets to see his house. With a U.S. surveillance drone buzzing overhead, he kicks through the rubble of the house built after the Russians destroyed Tarook Kalacha in the 1980s.

He says he doesn't believe there were any bombs here, just maybe Taliban staying in the abandoned village. Standing on the ruins, Khan Muhammad says he's not sure what happens next.

"If the Americans rebuild this village and help us stand on our own feet, and keep the Taliban out, then they will be our good friends," he says. But he adds, "If they leave us like this for the Taliban, they are our worst enemy."

The villagers say only God knows which it's going to be.