Accessibility links
Lawlessness Could Hijack Egypt's Popular Uprising It's been nearly a week since Egyptians took to the streets in a popular uprising to oust President Mubarak. They've since turned the most populous Arab nation on its head. But rampant lawlessness threatens to hijack the movement. Thievery and vandalism are badly damaging Egypt's economy. 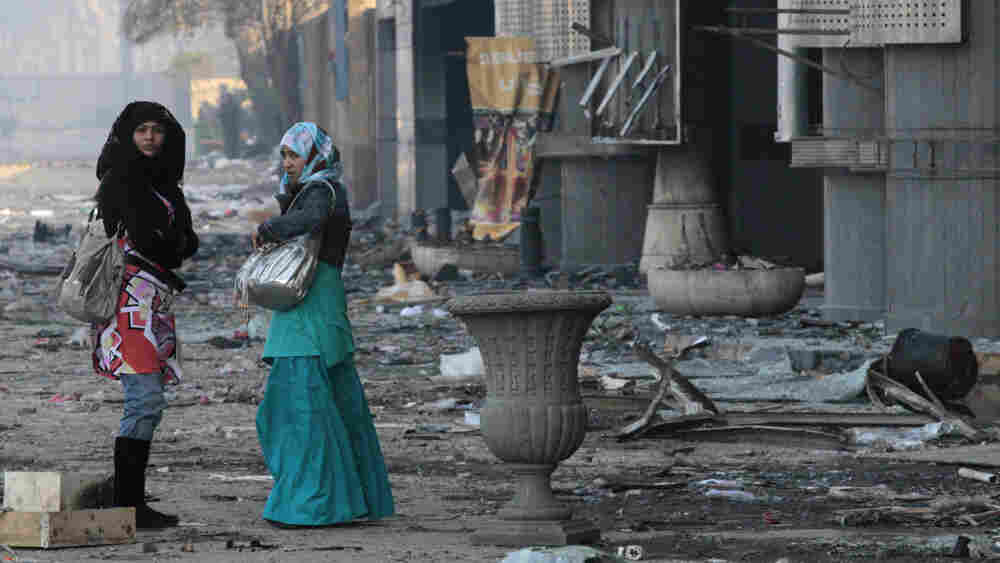 Women in Cairo walk past a shopping center Monday that was damaged during the anti-government uprising. Lefteris Pitarakis/AP hide caption 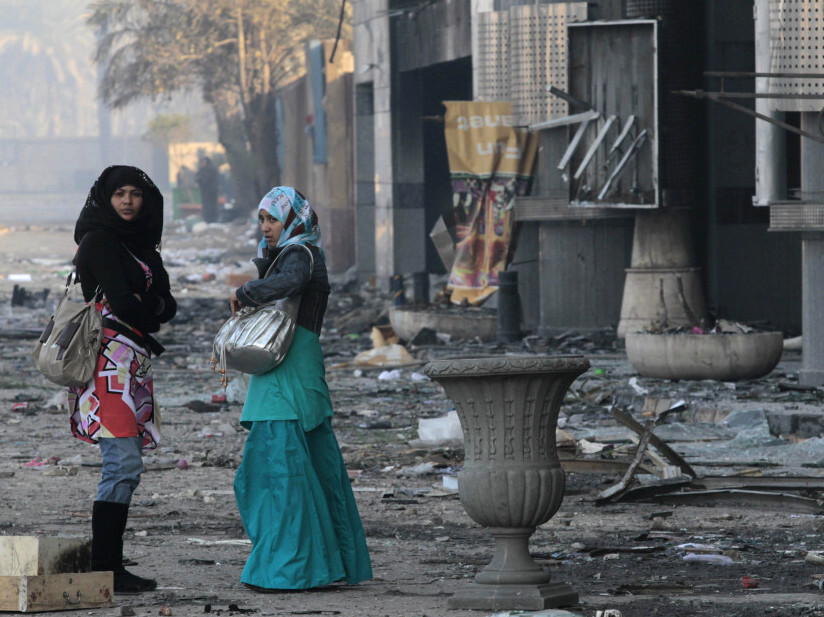 Women in Cairo walk past a shopping center Monday that was damaged during the anti-government uprising.

It's been nearly a week since Egyptians first took to the streets in a popular uprising to oust President Hosni Mubarak. They've since turned the most populous Arab nation on its head.

Not all the changes have been good. Rampant lawlessness threatens to hijack the movement. Thievery and vandalism coupled with a growing exodus from Cairo are badly damaging Egypt's economy, especially tourism. The country's banks and stock exchange remain closed.

The unprecedented nature of Egypt's ongoing protests was clear from the first few hours. In Cairo, chants that pronounced the people's determination to topple the government clearly sent a chill up officials' spines.

"It was only in 2003, 2005 that you started to hear people chanting about Hosni Mubarak, but actually ripping down his pictures and stuff in a very public way," says Joe Stork, deputy director for the Middle East and North Africa Division of Human Rights Watch. "The demand for Mubarak to resign, to get on the plane to Saudi Arabia, this is new."

Egyptian police and security forces were sent in to end the unrest. Then last Friday, the government took the unprecedented step of shutting down the Internet and cell phones across the country to stop protesters from communicating with each other or the outside world.

But the moves failed to end the uprising, and the number or protesters swelled in several major cities. Residents watching from their balconies and passersby on the streets below joined in.

"We need liberty, we need freedom," says Nagla Reze, who joined the protesters in Cairo. "The Internet is closed today [Friday] and mobile phones and we can't connect to anyone. This is freedom? Nothing, nothing is happening, just the image."

Historian Mahmoud Sabit says Mubarak was caught off guard. Reached on his cell phone after service was partially restored, he explained that by imposing continuous martial law and refusing to share power, Mubarak lost touch with the people he claims to represent.

"After 30 years of repressing the Egyptian people, perhaps the leadership is rather contemptuous of their people and maybe because of that, they may have underestimated them in all this but certainly it's a situation they need to address soon," Sabit added.

The government tried and failed with a final, violent crackdown at Cairo's now famous Tahrir Square.

Mubarak's announcement on television that he was dissolving his Cabinet but would remain in charge didn't satisfy protesters either.

The arrival of the army in Cairo's streets Saturday morning proved a turning point. The protesters were elated. And the soldiers quickly made it clear they were not there to interfere with the demonstrations.

Sabit and other observers say it cost Mubarak a heavy political price to have to ask the army for help. For one, he took the unprecedented step of appointing a vice president, Omar Suleiman. He's considered a Mubarak confidant but has close ties to the military.

Suleiman was widely viewed as the army's preferred successor to Mubarak over his son Gamal, whom the president is said to have wanted.

Also, the new prime minister named by Mubarak is a former air force commander. Some observers say at this point, the president is most likely negotiating a graceful exit rather than trying to regain control.

"[Mubarak's] got about a day or two, frankly, to make up his mind, really," Sabit said.

Analysts say there are signals from the government that a transfer of power could well be under way.

Some here say that ideally, the new vice president would head a caretaker government that incorporates some opposition figures.

The police are also being redeployed but have not clashed with protesters again, at least not yet. And it's clear the Egyptian military, with its vast presence here and repeated flyovers by jets and helicopters, remains in charge of the streets.