Accessibility links
New Cabinet Fails To Mollify Egyptian Protesters Hosni Mubarak swore in a new government to replace one dissolved as a concession to protesters. But opponents are going ahead with plans for mass protests Tuesday, which they hope will attract 1 million people to the streets.

Embattled Egyptian President Hosni Mubarak swore in a new Cabinet on Monday, a move that appeared unlikely to quell unrest as anti-government protesters geared up for a march aimed at toppling his regime.

In the most significant change, the interior minister — who heads internal security forces — was replaced. A retired police general, Mahmoud Wagdi, was named to replace Habib el-Adly, who is widely despised by protesters for the actions of his security forces.

But as news of the appointments broke, thousands massed in the protest's epicenter, Cairo's central Tahrir Square, breaking into chants of "We want the fall of the regime."

Reporting from Cairo, NPR's Lourdes Garcia-Navarro said the tens of thousands of people who are participating in the demonstrations have made one thing clear: reshuffling the Cabinet is not enough.

"No changes that Mr. Mubarak takes will appease them," she said. "The only thing that will satisfy them is his departure from office."

Opposition groups want 1 million people to march Tuesday on Cairo's streets. That march "would be, if indeed it takes place, the biggest march so far in the Egyptian capital," Garcia-Navarro said.

The march was called by a coalition of opposition groups, including students, online activists and opposition politicians. The Muslim Brotherhood, which wants to form an Islamist state in Egypt, has kept largely to the background but its members were participating in the demonstrations in increasing numbers. It is evidence of a rare cooperation among the disparate factions in Egyptian society.

In apparent reaction to the call for Tuesday's massive demonstration, state television broadcast a warning from the military against "the carrying out of any act that destabilizes security in the country."

The official death toll in the weeklong crisis was 97, with thousands injured, but many witnesses said the real count was much higher.

Despite using tear gas, water cannon and batons against protesters, Egyptian police and security forces have failed to turn back the angry crowds. On Friday, the government blocked Internet access and cell-phone service across the country to stop protesters from communicating with each other or the outside world.

Instead, the demonstrations have swelled in several major cities. Many protesters, such as Nagla Rezi of Cairo, expressed anger and outrage.

"We need liberty; we need freedom," she told NPR. "The Internet is closed today and mobile phones and we can't connect to anyone. This is freedom?"

Ahmed Nituali, a tour guide, said for the first time in 30 years, he is proud to call himself Egyptian. 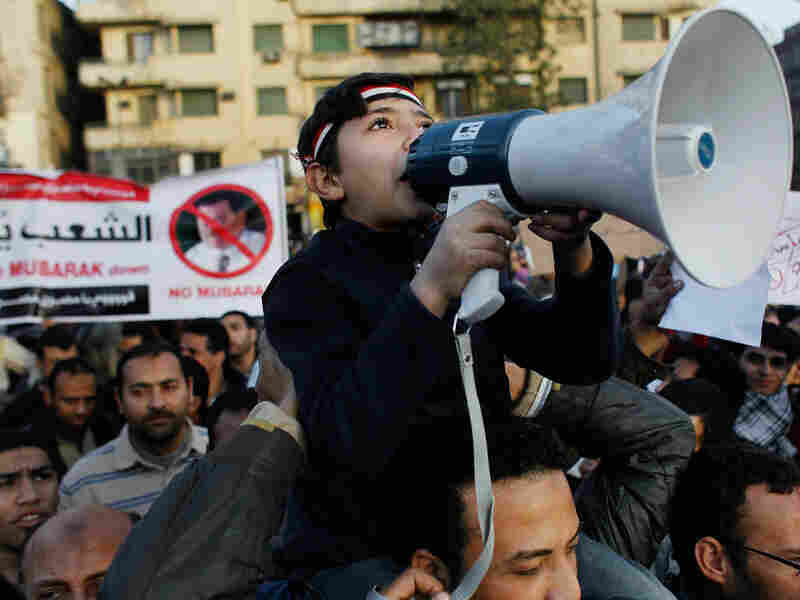 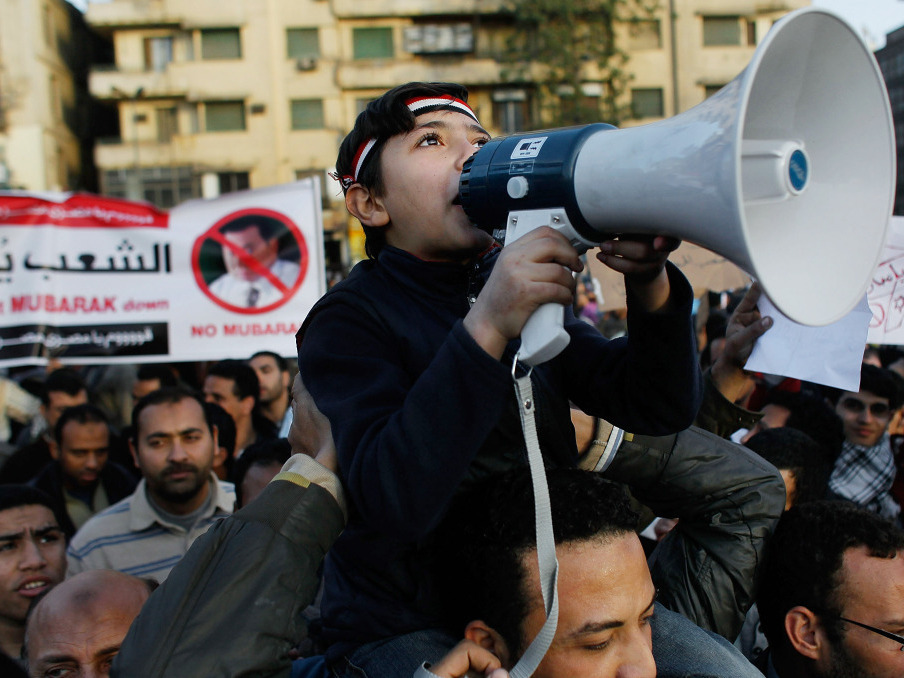 An Egyptian boy wields a megaphone as he chants anti-government slogans in Cairo's Tahrir Square on Monday afternoon.

"Today it's different. My head is high and I say out loud I am Egyptian and I'm proud to be so," he said.

Historian Mahmoud Sabit said Mubarak was caught off guard by the vehemence of the protests.

"After 30 years of repressing the Egyptian people, perhaps the leadership is rather contemptuous of their people and maybe because of that they may have underestimated them in all this," he told NPR.

Meanwhile, foreign tourists, including U.S. citizens, were being evacuated from Egypt as a safety precaution. The State Department said more than 2,400 Americans had contacted U.S. officials seeking government-chartered flights from Egypt; 1,200 had been evacuated.

Chaos and confusion reigned at Cairo's international airport Monday as thousands of foreigners sought to leave the unrest amid a shortage of outbound flights.

Shouting matches and even a few fistfights broke out inside Cairo airport's new Terminal 3.

Making matters worse, check-in counters were poorly staffed because many EgyptAir employees had been unable to get to work owing to a 3 p.m.-to-8 a.m. curfew and traffic breakdowns across the Egyptian capital.

"It's an absolute zoo — what a mess," said Justine Khanzadian, 23, a graduate student from the American University of Cairo who was among those waiting at the airport for hours to leave Egypt. "I decided to leave because of the protests. The government here is just not stable enough to stay."

Tanver Khalam, a visiting student from New York, said he had been told to evacuate. "It sucks. We were supposed to be in our first day of classes yesterday and I was looking forward to being here for a semester and now we are going to leave," he said.

Assistant Secretary of State Janice Jacobs said she expects there will be several flights over the next few days to evacuate families of U.S. diplomats as well as other Americans who need help leaving.

"We are employing every communications medium –- websites, e-mail, call centers, radio and TV — to get information out to U.S. citizens on the ground in Egypt, who are understandably worried," she said, acknowledging that Internet outages in Egypt have made it difficult to spread the word.

The U.S., which pours about $2 billion in aid into Egypt each year, has been walking a fine line — trying to encourage democratic reforms while being careful to stop short of calling for Mubarak's ouster.

"For the U.S., there are many unknowns out there," NPR's State Department correspondent Michele Kelemen said.

"This is a movement — the protesters — that is relatively leaderless at the moment, so I think there are a lot of worries for the U.S. about what comes next," Kelemen told Morning Edition.

The Obama administration said the Egyptian government has not gone far enough to meet the legitimate demands of the demonstrators, but White House spokesman Robert Gibbs stopped short of calling for Mubarak's removal.

"We're calling for a change in the way the country works," he said. "The determination as to when that change is met or how that change happens is not going to be determined or dictated by our country."

European governments were also navigating the same diplomatic terrain as Washington, seeking to distance themselves gently from Mubarak's regime.

On Monday, European Union foreign ministers meeting in Brussels called for "an orderly transition to a broad-based government, leading to a genuine process of essential democratic reforms."

Italian Foreign Minister Franco Frattini said the goal was to "help in a peaceful transition."

But Austrian Foreign Minister Michael Spindelegger acknowledged that he is worried about extremists coming to power if Mubarak's departure leaves a vacuum.

Soraya Sarhaddi Nelson and Lourdes Garcia-Navarro in Cairo, Teri Schultz in Brussels, Deborah Amos in Riyadh, and Michele Kelemen at the State Department contributed to this story, which also contains material from The Associated Press