Accessibility links
Colombian Bullfights Thrive Despite Danger, Death Every year, the Colombian bull festival known as Corralejas draws thousands of spectators and hundreds of participants. Although these bullfights are dangerous, for both the men and the bulls, they are embedded into Colombian culture, reflecting the country's rigid hierarchy between rich and poor. 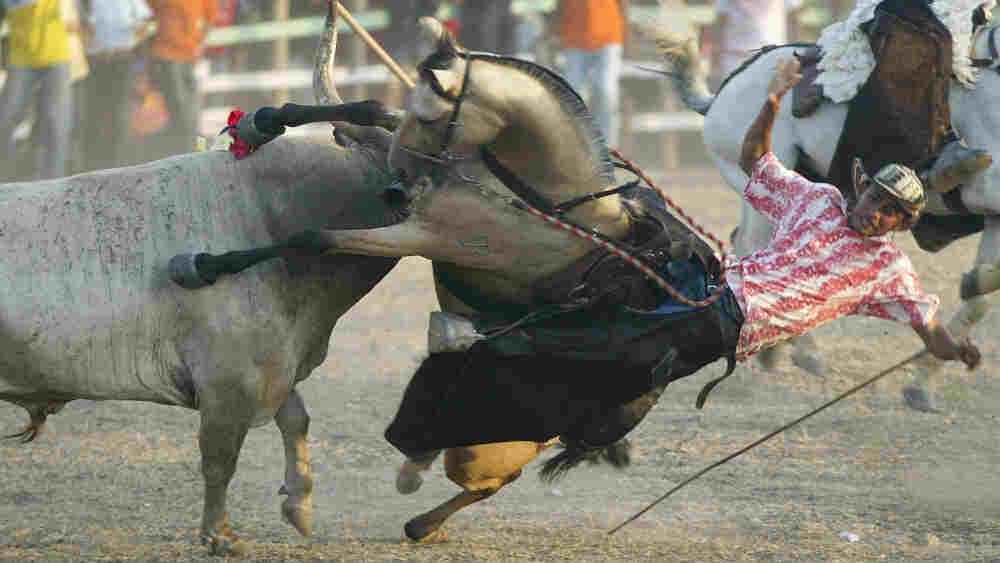 A horseman falls from a horse, after being gored by a bull during the 2007 Corralejas Bull Festival in Sincelejo, Colombia. William Fernando Martinez/AP hide caption 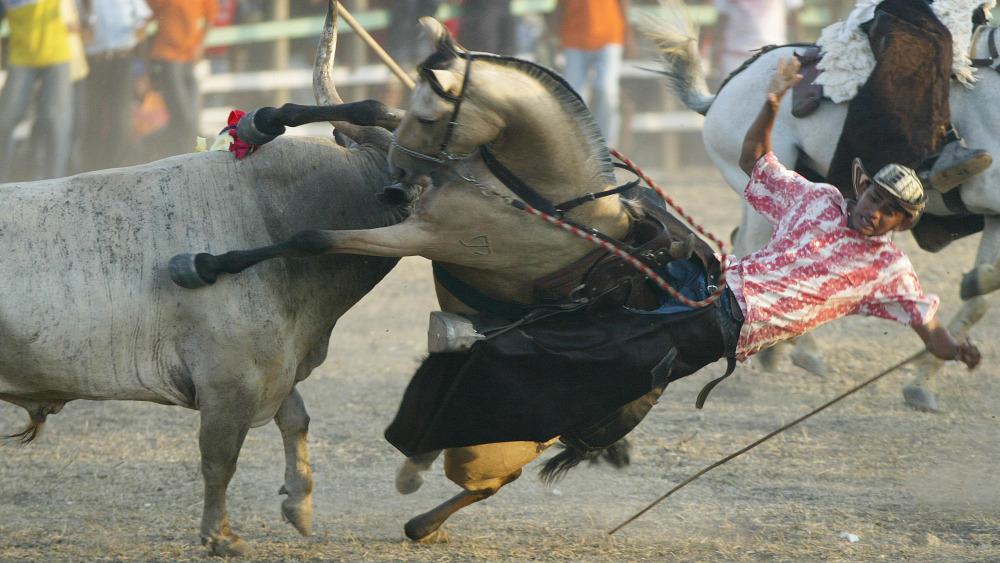 A horseman falls from a horse, after being gored by a bull during the 2007 Corralejas Bull Festival in Sincelejo, Colombia.

At 2 p.m. sharp, thousands fill the rickety, wooden stands in Sincelejo, Colombia. When the brass bands begin to warm up, everyone knows the action is about to begin.

Suddenly, a 900-pound bull charges into a ring filled with men, and participants are gored and sometimes even killed.

These bull festivals, known as Corralejas, take place in the first three months of the year. Although they are dangerous, Corralejas are embedded in Colombian culture and continue to live on.

The men taunt the bull with capes, some wield sticks and others try to rope it. Twenty horsemen chase after the bull, stabbing it with long, wooden pikes. The bull fights back, sometimes killing horses.

The bull is quickly spent — bleeding and exhausted. It's lassoed and led out. Some bulls die; others live to fight another day. Some of the men also leave the arena quite battered.

Jorge Luis Villegas says he's been gored six times, broken his rib and his collarbone. Yet on this day, he's back for more, along with his cape.

Bullfighting, he says, means money and no bosses. The money comes directly from the stands, from the wealthy cattlemen who come ready to give cash to those below.

Some of the bravest walk away with a few hundred dollars after the weeklong festival.

The spectacle reflects the rigid hierarchy of rural Colombia — the rich enjoy themselves in the stands while the poor risk their lives.

But Inis Amador defends the rituals. He's a lawyer and historian who helped revive the Corralejas after a rough patch in the 1980s.

He says the rituals were begun by workers, farmhands and even slaves. They took time off from backbreaking work by putting together makeshift bullfights.

There's not much difference between then and now.

Carlos Cumplido Oviedo, a cattleman, brought 20 of his bulls to fight on this day. He says he wants to breed ferocious bulls and see the matadors fight them off.

By day's end, 40 bulls had come and gone, lots of alcohol had been consumed and organizers tallied up the wounded from the week's festivities — nine people gored, two so seriously they were hospitalized. But no fatalities — not this time around.