Accessibility links
Hawaii's 'Big Wind' Power Project Stirs Up Fans, Foes In Hawaii, hearings begin Tuesday for the state's extensive windmill project. The plan is for a massive wind farm with hundreds of windmills on several islands. It's the largest renewable energy project for a state racing to get off oil. 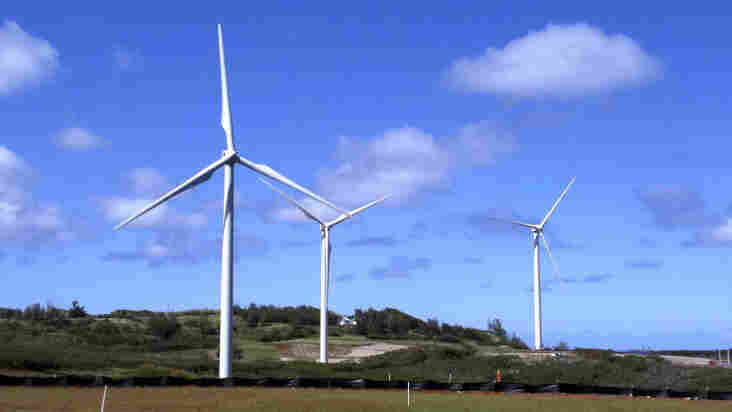 Windmills, like these standing near the ocean at Kahuku Wind Farm on Oahu, are at the center of Hawaii's efforts to cut its reliance on oil. Ben Markus/Hawaii Public Radio hide caption 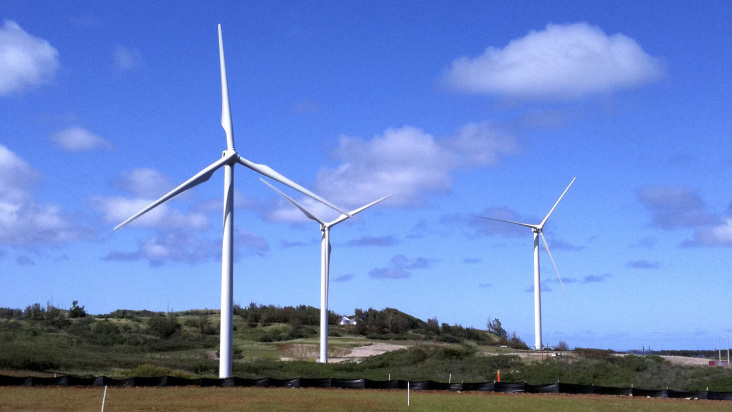 Windmills, like these standing near the ocean at Kahuku Wind Farm on Oahu, are at the center of Hawaii's efforts to cut its reliance on oil.

In Hawaii, hearings begin Tuesday for the state's Big Wind project. The plan is for a massive wind farm of hundreds windmills to span several islands. It's the largest renewable energy project for a state racing to get off oil.

Almost all of Hawaii's electricity now comes from a few massive generators, which burn oil imported on a never-ending line of tanker ships.

Hawaii would rather get electricity from wind — like that produced by the new 42-story windmill at the Kahuku Wind Farm on Oahu's North Shore.

"They're big but they're beautiful, they are," says Kekoa Kaluhiwa, who works for the company running this farm, First Wind.

Hawaii is hoping to build up to 200 more of these windmills on the small and windy islands of Lanai and Molokai. The power produced on the islands would then be sent to heavily populated Oahu through undersea cables.

The catalyst for Hawaii's unprecedented push to rid itself of oil came in 2008, when prices spiked. Hawaiians felt it at the gas pump, at the supermarket and in record-high electric bills — which even before the crisis were the highest in the nation.

"That was a very dark time in our relationship with our customers," says Robbie Alm, vice president of Hawaiian Electric, the state's largest utility. "And part of the problem for us was that we were completely helpless as a company, helpless as a state."

Josh Strickler, with the state's energy office, says of all the projects, none is bigger than the neighbor-island wind farms. "Without it, hitting our targets gets harder and harder to do," he says. Asked if that means it would be impossible, Strickler says, "It could be almost impossible."

By law, 70 percent of Hawaii's energy must come from renewable sources by 2030.

But, similar to the Cape Wind project in Massachusetts, not everyone here is welcoming the windmills.

Protesters gathered at a recent informal legislative meeting at the state capital.

Robin Kaye, with a group called Friends of Lanai, stood next to a scale model of the island. He pointed to the hundreds of miniature windmills that cover an area called Garden of the Gods.

"So you tell me, if that was in your backyard whether you'd object or not," Kaye said. "NIMBY is relative." Kaye and others are unwavering in their opposition, despite an effort to assemble a generous public benefits package — including a share of the wind farm's profits, not unlike the oil payments Alaskans get.

Walter Rittie, a longtime activist on Molokai, says that for native Hawaiians like himself, the wind is a revered god. "So until the state realizes what they're dealing with, that it's not a commodity, it's a cultural resource that Hawaiians have high regard for, part of our heritage, then we're in for a train wreck here," Rittie says.

Back at the wind farm on Oahu, First Wind's Kaluhiwa says getting power from the wind is perfectly suited to Hawaii's respect for the environment.

"Being from Hawaii, native Hawaiian, it's all about, to me anyway, how we tie in our values as a people, how we use today's technology with the values we've grown up with," Kaluhiwa says. "So this is a beautiful marriage of the two, I think."

He adds that the wind-power plan is pono — a Hawaiian word meaning "righteous" or "morally proper."

If everything falls into place, the first windmills could be up by 2016.