Accessibility links
Monster Snow And Megastorms, Oh My! Weather And Hype All of the talk of massive storms and "snowmageddon" just might serve a higher purpose — because sometimes, the talk is not hyperbole.

Monster Snow And Megastorms, Oh My!

Monster Snow And Megastorms, Oh My! 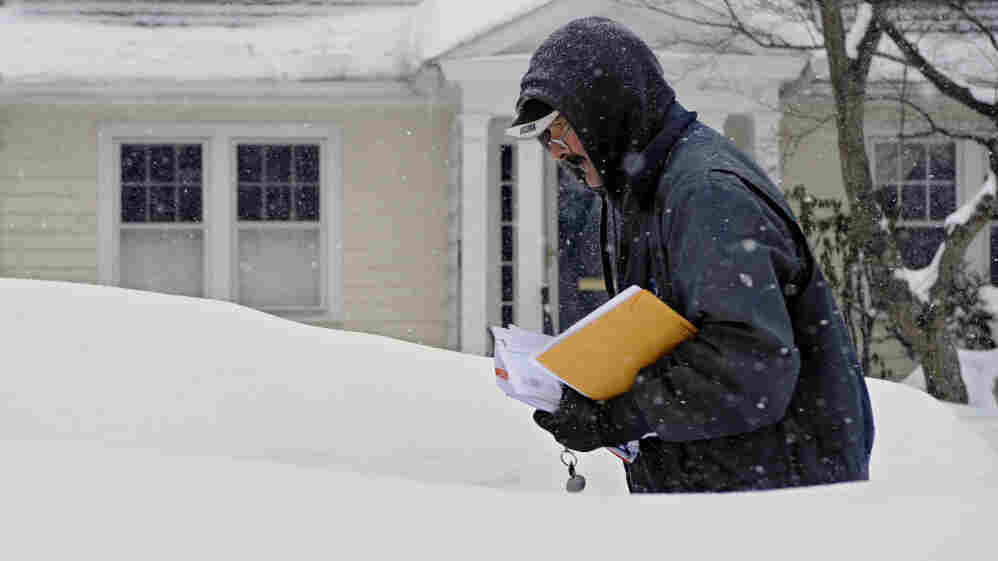 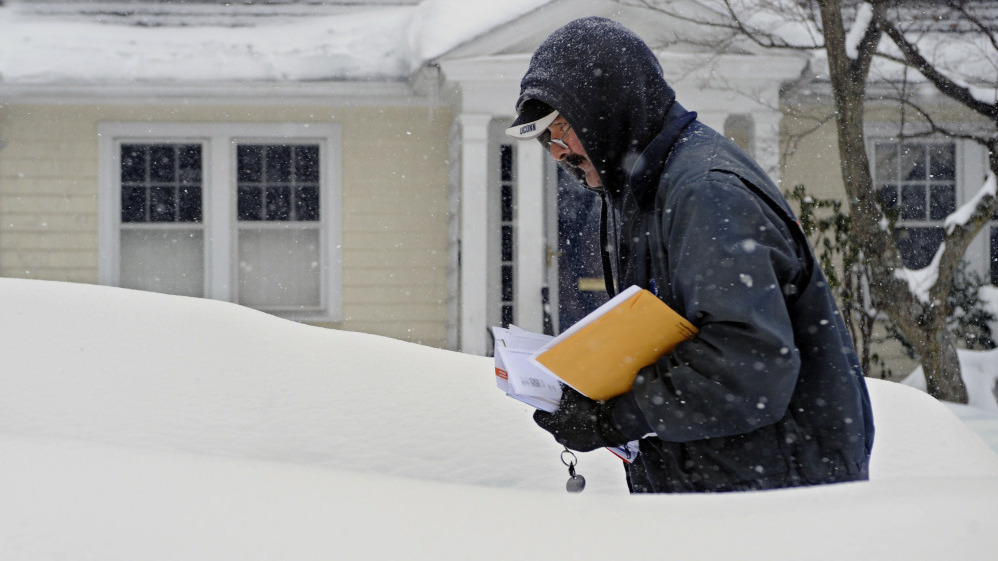 The nation is "freaking out over Midwest megastorm," according to MSNBC. Other alarming adjectives attached to the wintrified system — slip-sliding across America — include "monster" and "historic."

The Weather Channel deems it a "multi-day, dangerous, destructive winter storm" and warns: "ice, tornadoes, snow all on table."

If that's the case, it's going to be hard to tear ourselves away from the TV, radio or smart phone long enough to stock up on bread, milk and toilet paper. Or to make sure the windshield is protected. Or to wrap the fragile shrubs. Or to make sure everyone is safe.

Hmmm. Maybe that's the point. Maybe all of the supersaturated storm coverage — via various digital devices and 24-hour weather purveyors — works to inure or distract us when we really need to be paying attention and taking action. Is all this talk of monsters and megastorms and snowmageddon just irresponsible hyperbole?

She's responding to the monstrous monikers attached to winter storms these days, like Thunderslush, SnowJam and Commutegeddon.

Over-the-top storm names convey to viewers that they need to listen up, Amadeo says. 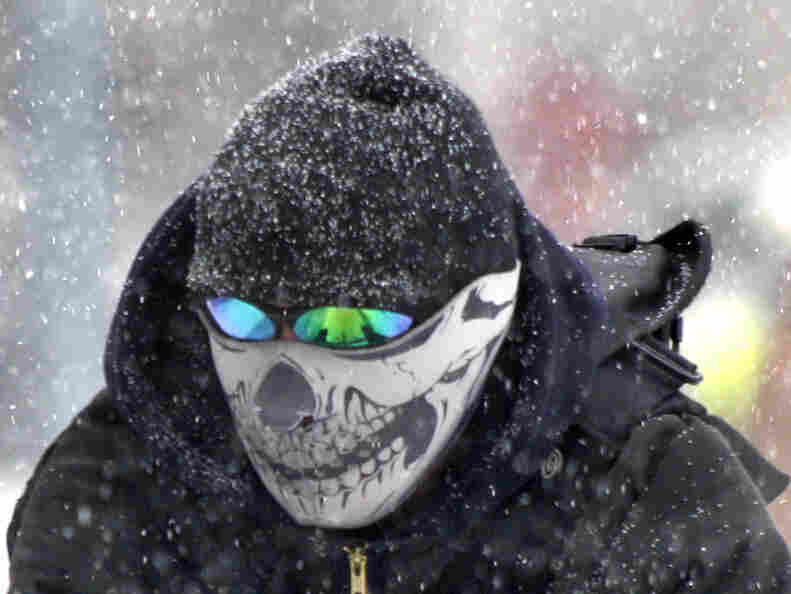 Perhaps this bicycle messenger in Pittsburgh, photographed during a snowstorm Jan. 11, is trying to tell us something. Keith Srakocic/AP hide caption 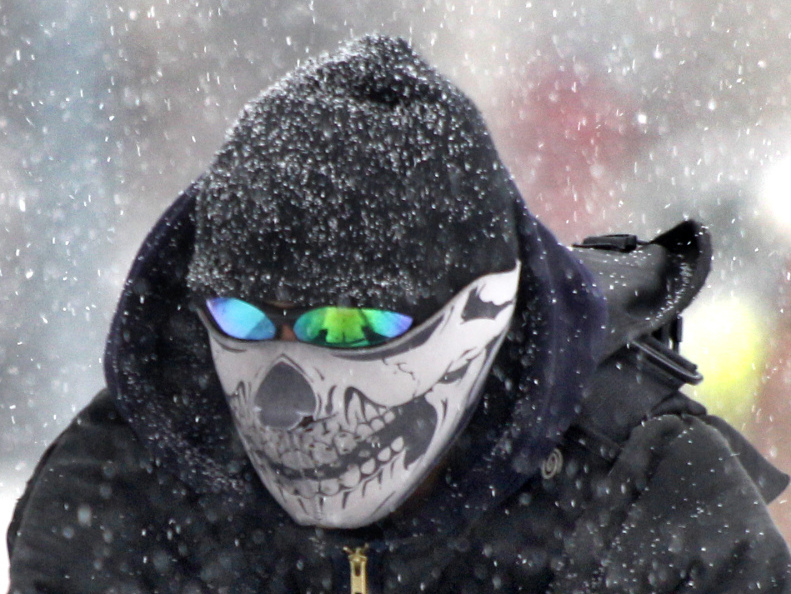 Perhaps this bicycle messenger in Pittsburgh, photographed during a snowstorm Jan. 11, is trying to tell us something.

"Just in passing I've overheard conversations about the intensity and danger of impending storms," she says. People refer to the storm systems by their TV names, "which lets me know that being creative gets people's attention."

Because of the available forecasting technology, Amadeo says, most of the time her predictions pan out and the warnings are warranted. Still it's hard to pinpoint when certain weather will occur, where it will happen and to what extent.

"Patterns change," she says, "or systems shift, which could mean the difference between snow and rain."

On the other hand, "if viewers weren't warned," Amadeo says, "you would hear, 'We didn't know. No one told us what to expect.' You have to be honest and give all possible scenarios. The one time that a storm is played down could possibly become the worst. Our job as meteorologists is to save lives."

A Brief History Of Weather

Humankind has not always been so breathless about the coming of wicked weather. In fact, it took centuries for anyone to be able to predict the weather at all.

In the 18th century, Benjamin Franklin was an amateur weather watcher. He discovered at some point that storms do not always travel in the same way that winds are blowing and was able to make conjectures about high-pressure and low-pressure systems. He also believed, and rightly so, though he had no way to prove it, that hail fell in the summertime because the upper atmosphere was cooler than the air at ground level. But predicting the weather remained pretty much impossible.

By the mid-19th century, Americans were beginning to understand the necessity of weather forecasting. In an unsigned essay in the Chicago Tribune on Jan. 12, 1864, a writer challenged U.S. meteorologists to take bad weather more seriously. The writer chastised scientists to learn from fish and other creatures that storms were coming. The essay is also remarkable because it contains what is perhaps the first reference to a "monster" snowstorm in American journalism.

"We shall do well to study and imitate, so as to mitigate, if not altogether to remove, the evils which inevitably result from a careless indifference to those natural laws which govern the alternations of heat and cold, of storm and calm, of summer and winter," the writer opined. "How many calamities might have been avoided, and how much real suffering might have been spared, if a few hours' warning had been given us of the approach of that terrific storm which ... swept over this continent with a fury almost unknown?"

Apparently a weekend snowstorm wreaked havoc in the Midwest. "Provided the executives of our railways had known during the afternoon of Thursday last that unless they stopped the trains on their way to this city they would almost to a certainty be overtaken with the fury of a monster storm which must involve the loss of thousands of dollars," the writer observed, "is it not clear that immediate and effectual steps would have been taken to ensure the safety of the trains with their passengers?"

He went on to extol the British for their meteorological advances. And to say: "We study with intense interest the slightest fluctuations of the monetary scale in Wall Street ... but are perfectly indifferent to the fluctuations [of the] barometric scale from which may be elicited information that would save hundreds of lives and hundreds of cargoes."

The writer added: "It is not simply foolish, it is culpable negligence, and the sooner we commence anew, the more intelligent, the more happy, and the more wealthy we shall become."

Yolanda Amadeo agrees. There are definitely more problems — potentially more lives lost, more property damaged — "when the severity of the storm is underplayed."

Viewers, she says, "trust you to guide them through impending storms and life-threatening weather. If you don't, you've let them down."

And that is a monster responsibility.