Accessibility links
Iraqis View Egypt Protests As Exciting, Bittersweet As with many things in Iraq, the reaction to the uprising in Egypt depends on whom you ask. Some are glad to see others looting in the midst of chaos. Others say it's bittersweet to watch the Egyptian people rise up, in light of a failed uprising against Saddam Hussein 20 years ago. 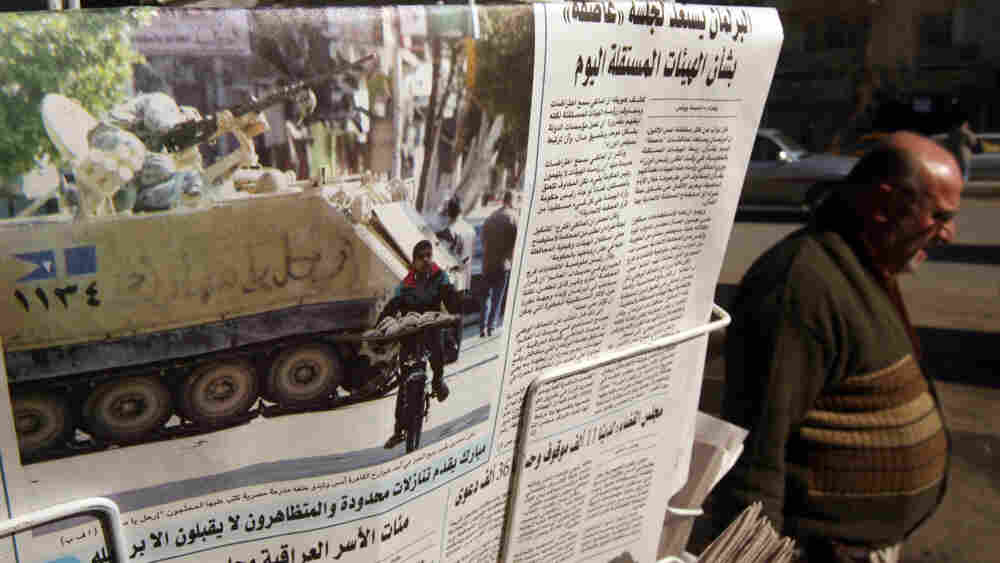 An Iraqi man walks past a stand showing a daily newspaper with an image from Egypt on the front page Tuesday. Ali al-Saadi/AFP/Getty Images hide caption 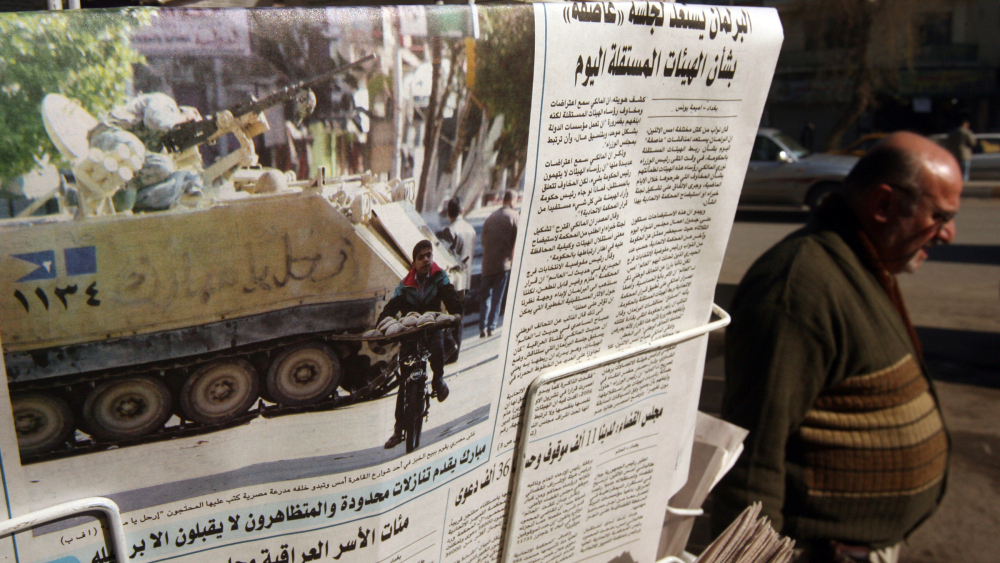 An Iraqi man walks past a stand showing a daily newspaper with an image from Egypt on the front page Tuesday.

Around Iraq, TVs in offices, cafes and homes are tuned to live feeds of the protests in Egypt. It seems like all of Iraq is talking about what it might look like if another longtime Arab dictator falls.

Yet, as with a lot of things in Iraq, the reaction to the uprising in Egypt depends on whom you ask.

In a Shiite neighborhood, amid the battery of checkpoints, one policeman says he figures he ought to be more polite now, because people might take to the streets and try to get the police fired.

And that sentiment goes beyond the checkpoints.

In local newspapers, one official warned of problems like a coming "unemployment volcano" and said the people could erupt at any time. Others pointed fingers at their rivals, blaming them for lack of services. Still others were quick to make promises to take better care of common people.

Reminders Of Iraq's Past

In the middle-class, mostly Shiite neighborhood of Karada, Iraqi guys sitting around and smoking sheesha say they're excited about what's happening in Egypt.

They say they're glad Iraqis aren't the only ones who looted in the midst of chaos. Now, they say, maybe Egyptians won't be so quick to judge. 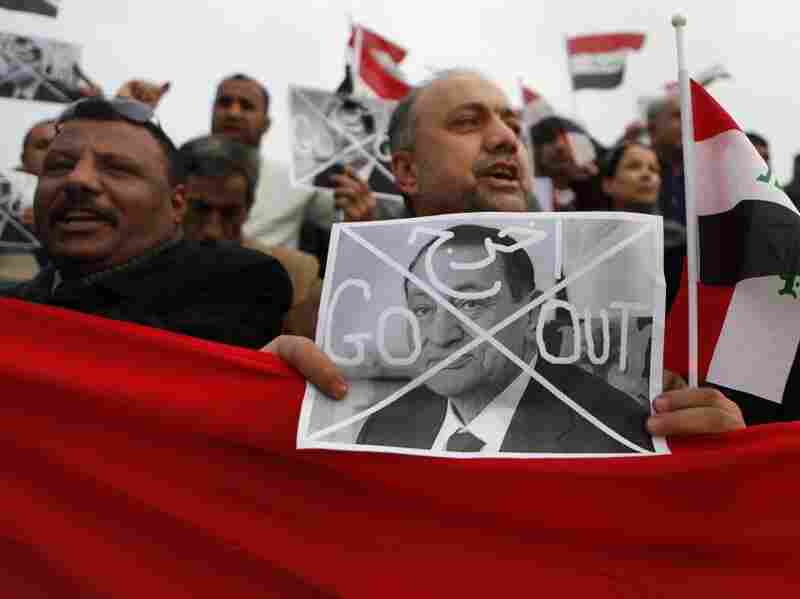 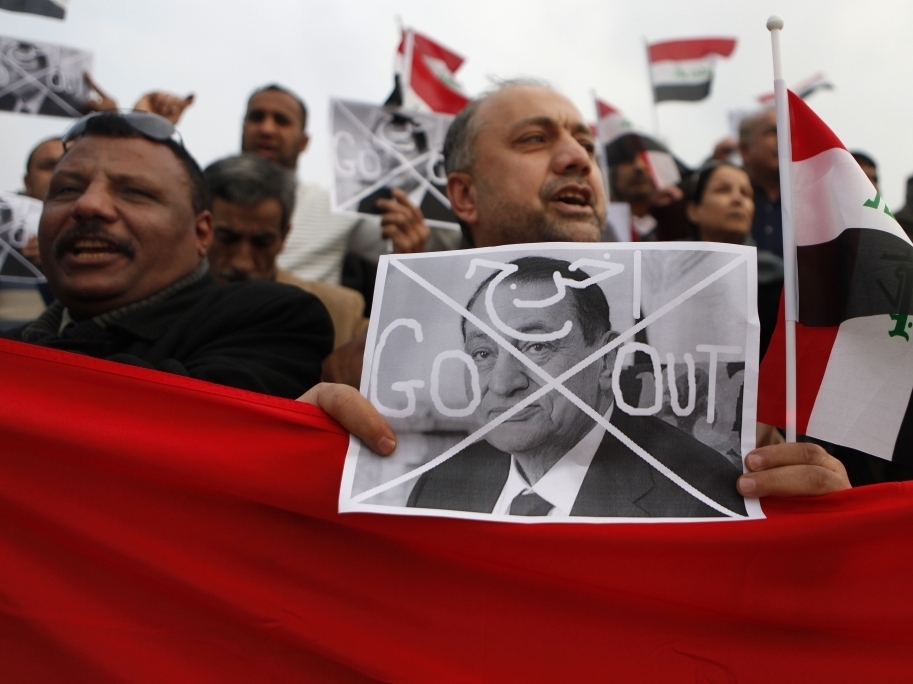 "They were criticizing us, accusing us of being Ali Baba, which means thieves," says Alaa Abdulkarim. "But now they are doing the same thing."

Down the street, some older, perhaps wiser, men are playing dominoes. When asked about Egypt, journalist and writer Sabah Hassan recites some Arabic poetry: "If the people want life, then destiny should respond."

But, he says, it's bittersweet to watch the Egyptian people rise up against a dictator. The Iraqi people did the same, he says, 20 years ago. This was after the first Gulf War, when protests swept the south and north of Iraq.

No live feeds on Al-Jazeera. Eventually, the uprising was suppressed. It was 12 more years before the dictator fell.

Across town is the mostly Sunni neighborhood of Mansour — where people were much more likely to be loyal to Saddam, and much more wary of the idea of regime change.

At a street stall, they are cooking hamburgers Iraqi-style, meaning that the meat is lamb and the french fries go inside the bun.

Owner Jassim al Hilli says it's galling to watch the Egyptian people do the job of toppling the strongman, when in Iraq it took an occupying force to bring him down.

Ibrahim Sumydai, an Iraqi political analyst, agrees that many Iraqis are still angry that they weren't the ones to topple Saddam. But he says he doubts the spirit of mass protest will spread here. At least not right now.

First, he says, Iraqi society is still divided. If Shiite leaders were to lead mass protests, Sunnis would probably sit out — and vice versa.

That said, there are things that unite Iraqis: anger at a continuing lack of electricity, which brought both Sunnis and Shiites to the streets last summer; unemployment despite rising oil revenues; and the ongoing lack of security.

"I think maybe we will face increasing calling for good services. But all the Iraqi people feel they are guilty because they brought [these] politicians in power," he says.

Right now, Sumydai says, Iraqis should focus on rebuilding the country, not breaking it down.

Like those of many others, his message to Egypt was simple: Be careful what you wish for.

Ghassan Adnan contributed to this report