Blizzard conditions stretching from Texas to Maine have paralyzed travel in major cities across the nation's midsection, closing airports and schools and leaving downtowns looking like snow-covered deserts.

The storm — billed as the worst in decades — unleashed much of its fury on the heartland, bringing Chicago and the rest of the Midwest to a standstill. As it churned into New England, a number of roofs collapsed as a foot or more of snow piled atop the remains of last month's blizzards.

Travelers at Boston's Logan Airport, which was closed temporarily Wednesday for the first time this season because of ice, continued to face cancellations and delays. The storm tested even the hardiest New Englanders, including snowplow driver Dave Mastrioni, who was clearing snow for everyone from churches to private businesses and the city of Newton, Mass.

"It's been about a hundred hours of plowing — that's about two years' worth," he said.

Mastrioni's was one of nearly 500 plows on the roads in Massachusetts alone, working days that stretched from before dawn to after dark. 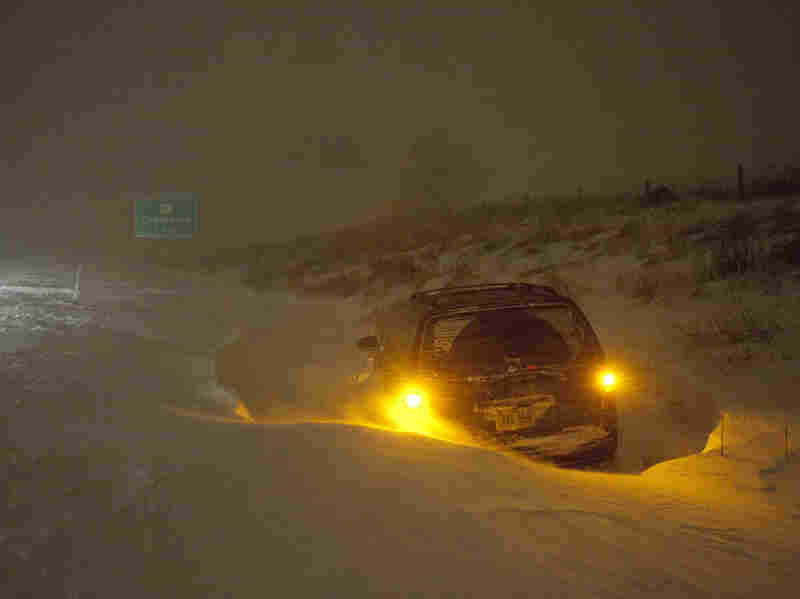 A vehicle is stranded Wednesday on Interstate 43 in Grafton, Wis. The area was under a blizzard warning, and some freeways were shut down. Jeffrey Phelps/AP hide caption 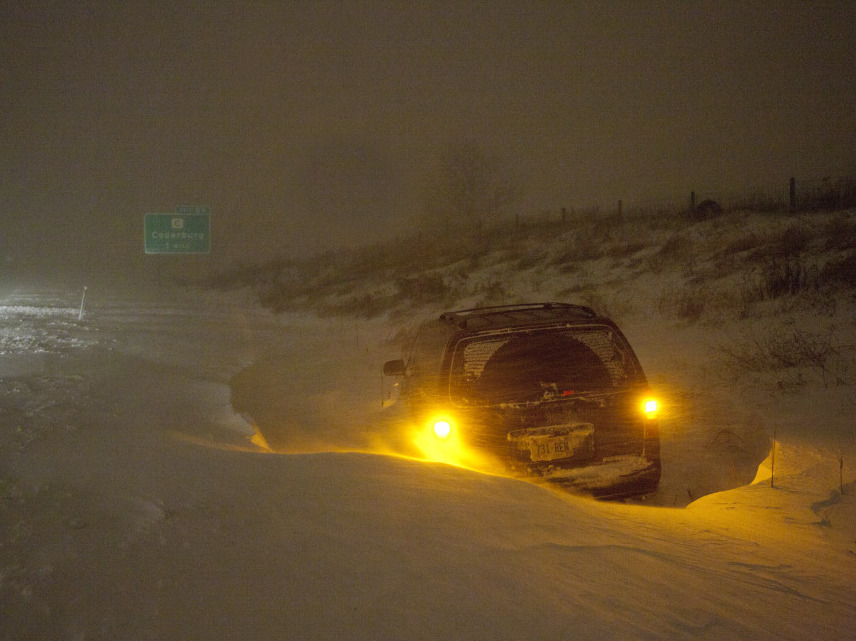 A vehicle is stranded Wednesday on Interstate 43 in Grafton, Wis. The area was under a blizzard warning, and some freeways were shut down.

Logan Airport received special permission to dump snow into adjacent Boston Harbor in case it has to. Boston city officials are talking about making the same request. Meanwhile, dump trucks have been hauling snow out of the city to so-called snow farms.

Peter Judge of the Massachusetts Emergency Management Agency said in some places traffic was choked down to one lane between the massive snow banks that keep growing with each successive storm.

"This is Groundhog Day — just like the movie," Judge said. "It's repeated and repeated."

But officials said their biggest worry wasn't roads, but roofs.

Dozens of collapses were reported from the Midwest to the East Coast, including one at Triton Technology's building in Easton, Mass. Fire Department Capt. James Walsh says a small section fell first, giving nearly 200 people just enough time to get out.

"Basically as soon as they had the building evacuated, the ... whole roof came down," he said. "The whole building basically collapsed."

Crews were also trying to keep up with power lines coming down and schools remained closed, to the delight of some such as fourth-grader Ben Weiss.

The storm also played havoc with Meals on Wheels programs in some states such as Vermont where the elderly and disabled won't get their daily visit.

Penny Jones, who manages Meals on Wheels in Rutland, Vt., said their phone had been ringing off the hook for the past two days.

"This is the third day in the last month that we've been closed due to the bad weather and that is very unusual," she said. "We really do try to get out to the outlying areas even when the weather is bad because it's Vermont and we expect it to be bad."

Jones said that to ensure their clients don't go hungry, the program hands out emergency blizzard bags each November that contain a full day's worth of nutritious nonperishable meals. She says they have restocked those bags twice. 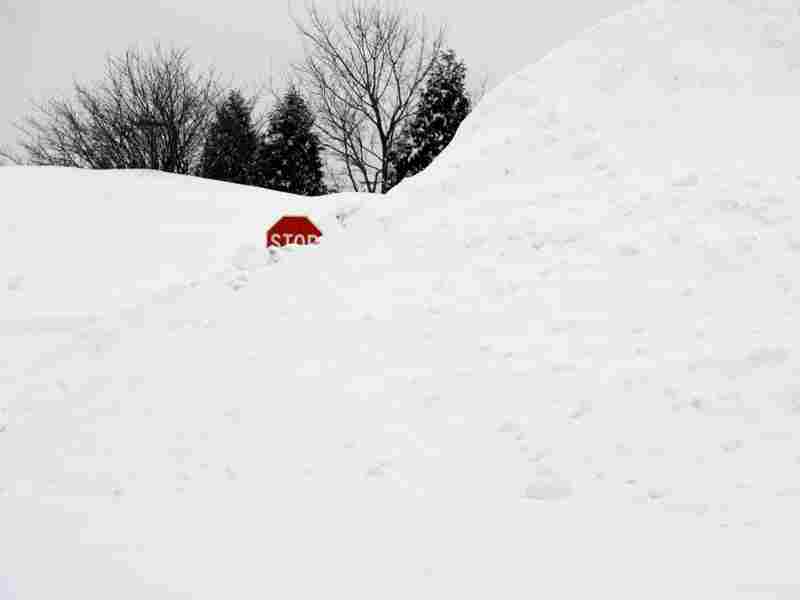 A stop sign pokes out of a large pile of snow at the end of a street in Enfield, Conn., on Tuesday. Jessica Hill/AP hide caption 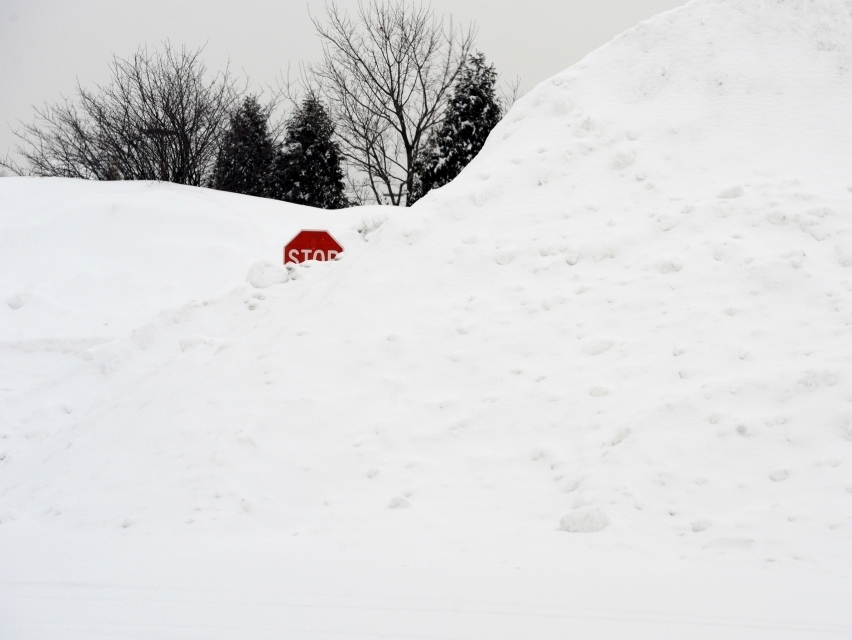 A stop sign pokes out of a large pile of snow at the end of a street in Enfield, Conn., on Tuesday.

In New York, officials pre-emptively banned tandem trucks of all sizes from a major interstate. New York City residents were urged to use mass transit and to clear snow and ice from fire hydrants.

There were several reports of structural collapses in the Northeast, including a gas station canopy on New York's Long Island and an airplane hangar near Boston. In at least two places, workers' sense of hearing allowed them to narrowly escape.

"It's like a bomb scene," he said. "Thank God they left the building when they did."

The storm wreaked havoc throughout the Midwest.

Snowfall and ice had eased over much of the nation's midsection by midday Wednesday morning, but bone-chilling winds made travel difficult — in some places impossible.

Chicago had 19.5 inches of snow, making this the third-worst storm on record, with still more possible. Indianapolis was coated with an inch of ice, and New York City was expected to get up to three-quarters of an inch of ice before the mix of sleet and freezing rain warms up to rain.

In Chicago, the city shut down Lake Shore Drive, where hundreds of motorists were stranded for as long as 12 hours after multiple car accidents. The city said 700 to 900 vehicles had been abandoned on the iconic roadway.

"The ones that wanted to take their cars home and really wanted to stay, we had to say, 'It's time out. Time to go. We gotta get you out of here. It's for your safety,' " said Robert Hoff, the city's fire commissioner. "We didn't want to do it, but the bottom line is we gotta make the call because if something happens to someone, we don't want to have a mass movement."

Jenny Theroux, 23, drove one of those cars. She said she was stranded just 800 feet from an exit from 4 p.m. Tuesday until about 4 a.m. Wednesday.

"It was a very stressful experience toward the end, especially not knowing what's going on," she said after abandoning her car. "I'm just very confused as to why it all transpired this way."

Not only was driving dicey, but flying in and out of Chicago's O'Hare International Airport, a major U.S. hub, won't be possible until Thursday. The decision by O'Hare-based airlines to cancel all their flights for a day and a half was having ripple effects across the country.

More than 5,300 flights had been canceled as of Wednesday morning, according to flight tracking service FlightAware.

In Iowa, even those areas where the worst of the snow was over were contending with dangerous road conditions.

Mike McClure, a meteorologist with National Weather Service in Davenport, Iowa, said he had seen snowdrifts as tall as 3 feet.

"Despite the fact that the snow is winding down, the strong winds, drifting and blowing will produce very hazardous conditions for the better part of the day today," he said.

Parts of eastern Iowa received more than a foot of snow. The region also braced for for severe wind chills Wednesday, with some areas as cold as 20 to 30 degrees below zero.

The colossal storm has caused power outages from Texas to New Jersey.

More than 200,000 homes and businesses in Ohio began Wednesday without power, while 100,000 had no electricity in New Jersey and Pennsylvania, which were hit with mostly freezing rain and ice. Rolling blackouts were in Texas, including Super Bowl host city Dallas.

In Oklahoma, Frank Gresh with the Oklahoma City Ambulance Service said one of the big problems there was vehicles abandoned in the snow.

"In one case, we had a crew get out with cots and equipment and walk several blocks to get to the house where the patient was located," he said.

Wisconsin Emergency Management spokesman Tod Pritchard said there had been drifts of 10 feet to 15 feet in some areas.

"This is one of those blizzards of a lifetime, and you shouldn't mess with it," he told NPR. "It's dangerous, and staying home is really the safest thing to do."

By the time the enormous weather system dissipates, it could affect as many as 100 million Americans, forecasters said.

For those who insisted on braving the elements, the risks were many. "If you don't have enough fuel in your vehicle, you can run out, the heat goes out — and people can even freeze to death," said Greg Cohen, executive director of the Roadway Safety Foundation.