Accessibility links
Doctors Throw Flags On High School Concussions Professional sports leagues and sports medicine doctors are teaming up in support of new laws designed to protect young athletes from concussions. The regulations are aimed at reducing the more than 60,000 concussions among high school athletes each year. 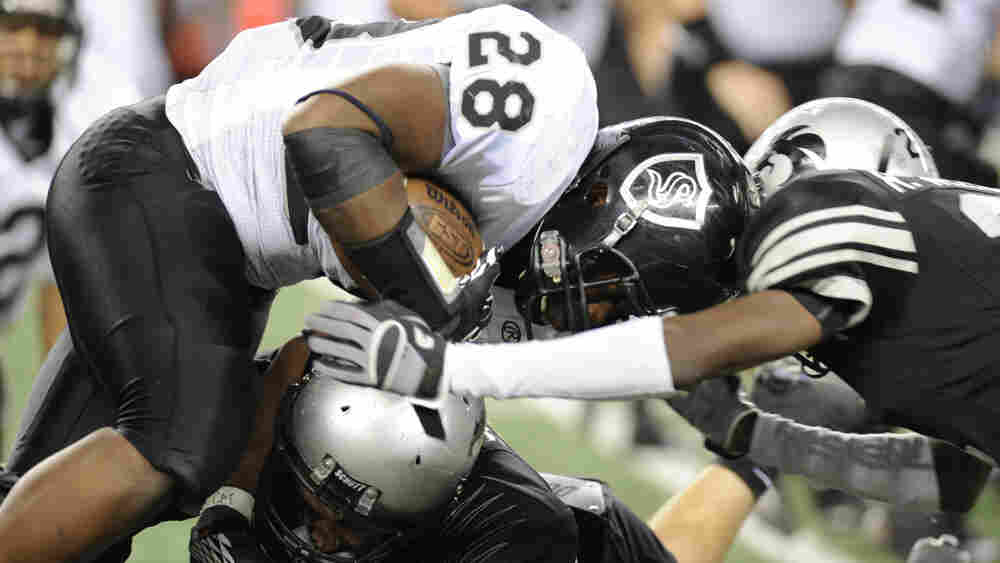 Malcom Brown (left) is hit by Jake Smith on a kickoff return during a high school state championship game in Arlington, Texas, in December. Sports medicine professionals and the NFL are calling for tougher regulations on head injuries sustained by young athletes. Matt Strasen/AP hide caption

In the Super Bowl this weekend, any player who takes a shot to the head and shows signs of a concussion will be taken out of the game. But it's a different story for high school athletes, who sometimes play on despite a head injury.

So the NFL, the American College of Sports Medicine and a long list of other groups are joining together to support state laws designed to protect the brains of young athletes. 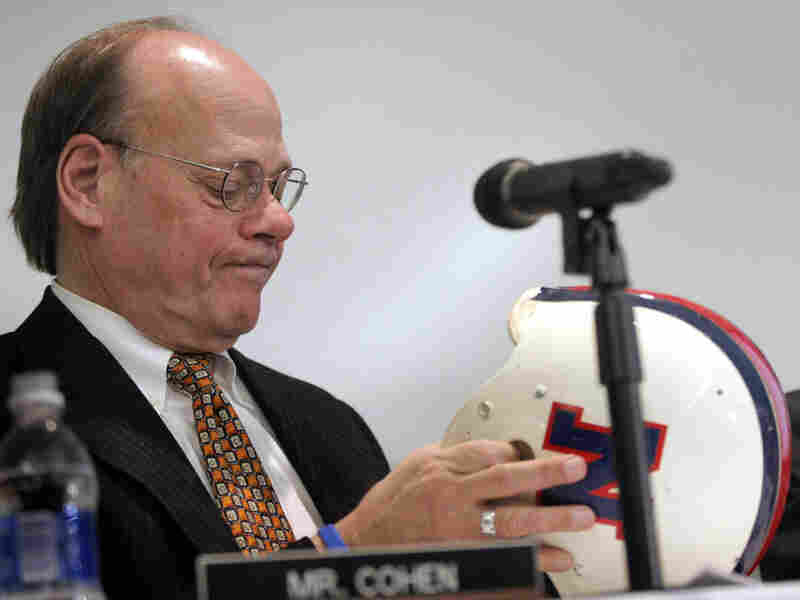 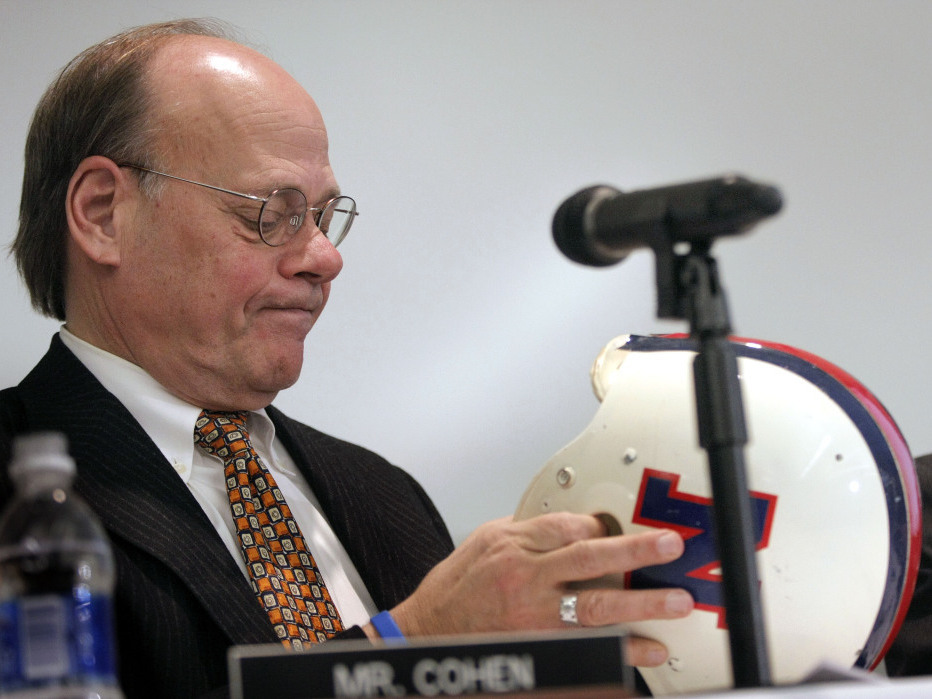 Steve Cohen, a member of the House Judiciary Committee, examines the helmet of Lem Barney, a former player for the Detroit Lions. A committee hearing last year evaluated steps taken at the professional, college and high school levels to deal with football brain injuries.

The groups say they're concerned because each year more than 60,000 high school athletes sustain a concussion. It's an injury that temporarily affects brain function, though it may or may not cause a person to lose consciousness.

It's not just football players who get concussions — it's male and female athletes involved in soccer, wrestling, basketball, baseball, field hockey — even volleyball. Many of these athletes never get an evaluation that would reveal their injury.

"Unfortunately, kids at the youth sports level don't have neurosurgeons, neurologists and some of the finest doctors on the sidelines," says Jeff Miller, a senior vice president of the National Football League. "It's just not practicable."

The coalition wants every state to have a law like the Lystedt Law, passed in Washington in 2009 and named after Zackery Lystedt, a teenager who sustained a serious brain injury during a middle school football game in 2006. Lystedt's head struck the ground in the first half, but he was allowed to keep playing. When he took another shot to the head late in the game, the result was devastating.

The Lystedt Law says an athlete suspected of having a head injury must be removed from competition. That's because even a minor injury to the brain can make it highly vulnerable to further damage.

Easing Back Into The Classroom

A concussion law might have helped Sarah Rainey, a high school soccer player in Alexandria, Va., who took a violent hit during a game 10 months ago.

"I thought I just got the wind knocked out of me, and I told my coaches and the trainer that I was OK," she says. "I passed the sideline evaluation. I played the remaining five minutes and then two overtime periods."

But after the game, Rainey began experiencing headaches, nausea and fuzzy thinking. Her father took her to an emergency room where doctors told her she'd suffered a concussion and sent her home. 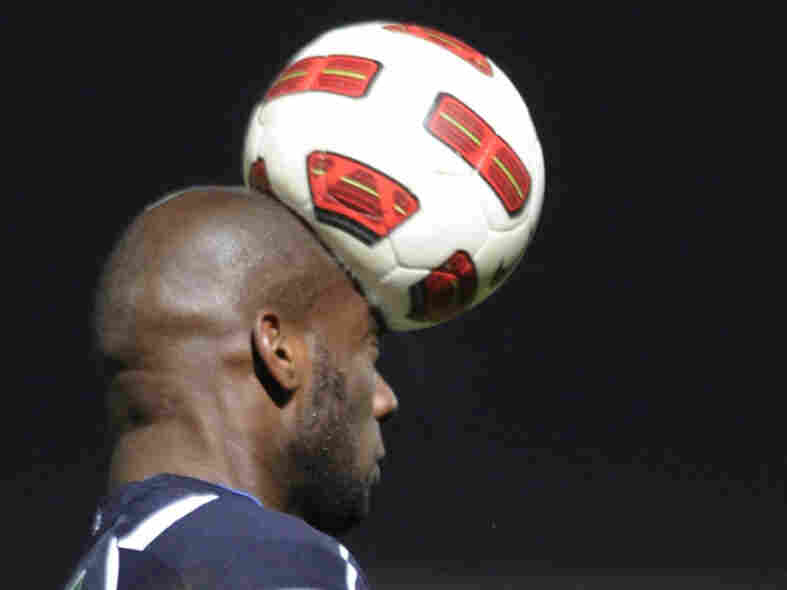 Not only football players are at risk for head injuries — soccer, basketball and volleyball players can sustain concussions, too. Michael Ciani, a defender for the French soccer team Bordeaux, heads the ball during a French Cup match on Jan. 22. Damien Meyer/AFP/Getty Images hide caption

When she returned to school just a few days after the injury, she found that trying to read small print, looking at a computer screen and even her teachers' voices could trigger headaches and nausea.

She was treated by Gerry Gioia, who runs the Safe Concussion Outcome Recovery & Education (SCORE) Program at Children's National Medical Center in Washington, D.C. Gioia is also part of the coalition pushing for concussion laws.

No law could have prevented Rainey's concussion, Gioia says. But a law might have helped limit the damage.

Unfortunately kids at the youth sports level don't have neurosurgeons, neurologists and some of the finest doctors on the sidelines.

"The problem is that she was let back into the game later on," he says. "It's hard to know exactly the contribution of that. She didn't take another hit, but certainly she was overworking that body and brain during the period of this metabolic crisis."

Rainey also returned to class too soon — something else a law could have prevented, Gioia says. He says an injured brain is like a sprained ankle. It heals faster if you don't use it too much.

"As you're learning and thinking and doing all that good performance activity in the school, that's demanding more from your brain than it can handle," Gioia says. "It's taking away the important energy toward recovery, and it basically then is affecting negatively your recovery."

The coalition wants concussion laws to include provisions for easing injured students back into the classroom.

But for any of the laws to work, athletes who take a blow to the head need a proper evaluation from a trained medical professional, says Jim Whitehead, executive vice president of the American College of Sports Medicine. 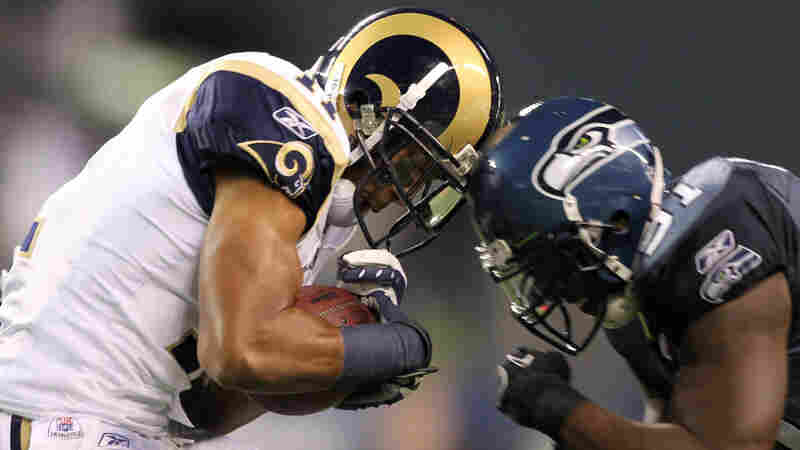 "You don't want coaches making medical decisions," he says. "That isn't their core competency. So you want to take any of those things out of the hands of people who really aren't qualified to make those judgments, and put it in the hands of professionals who are."

That's why the coalition supports laws that call for training coaches and others on the sideline not to diagnose a concussion, but to recognize subtle signs in an athlete that could mean a concussion.

"And if there's any doubt whatsoever, you sit the athlete until he or she has been cleared by a health professional," Whitehead says.

About 10 states, including Virginia, have passed youth concussion laws. The coalition's goal is to get laws in at least 10 more states by the end of the year.